‘Our Bodies’ Gets an Israeli Makeover 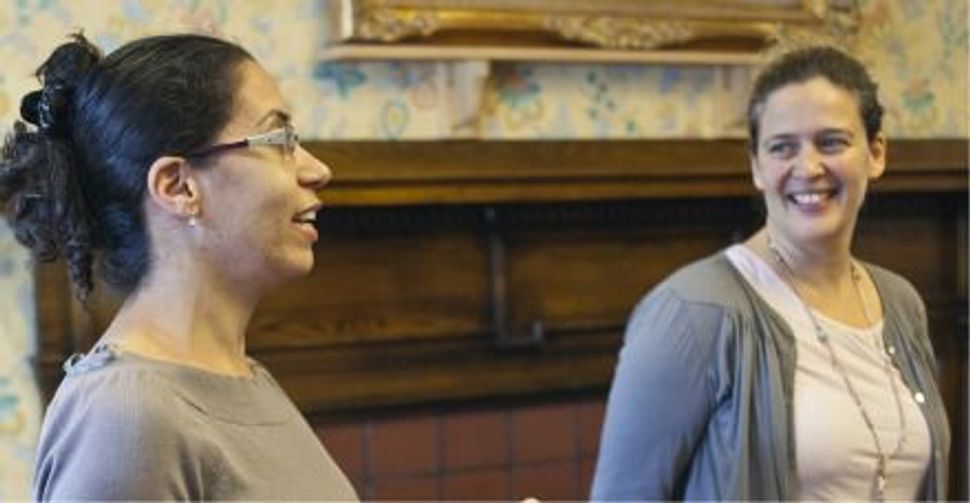 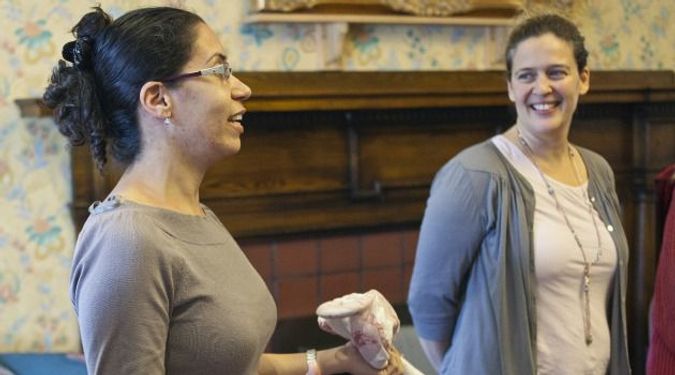 Our Israeli Bodies: Raghda Elnabilsy, left, and Dana Weinberg discussed the new version of the women?s classic ?Our Bodies, Ourselves,? translated into Arabic and Hebrew. Image by Marlies Bosch

If you’re a “woman of a certain age” in Israel, you don’t have a straightforward term like “menopause” to refer to that stage of life. In Hebrew you’re stuck with gil ha’blut, which translates roughly to “the age of worn out.” In Arabic it’s sinn al-ya’s — “the age of despair.” So when Dana Weinberg and Raghda Elnabilsy set out to adapt the seminal text “Our Bodies, Ourselves” for Hebrew- and Arabic-speaking populations in Israel, they had to reinvent some of the very words that defined the original version.

A groundbreaking paradigm shifter that taught women to value themselves and helped usher in women’s rights, the original pamphlet — written by 12 feminists in Boston — included sections on masturbation, virginity, orgasms and abortion. Detailed photos demonstrating such forbidden topics as proper use of contraceptives led groups across the country to attempt to have the book banned from local libraries. Yet its influence was enormous: Since “Our Bodies, Ourselves” was first published in 1970 as a 193-page newsprint booklet, it has sold more than 4 million copies, been through nine revisions and numerous translations, spearheaded by grassroots women’s groups in more than 25 countries. Each new American edition reflects changing attitudes toward women’s health and sexuality.

The Hebrew and Arabic versions, released in September, boast timely topics that are of interest to their respective demographics. For example, because treatments for infertility are so expensive in the United States, the chapter on assisted reproductive technologies in the American edition is relatively short; in Israel, in vitro fertilization and other infertility interventions are government subsidized and in widespread use, so the corresponding chapter in the Hebrew edition is 80 pages, more than five times as long.

“It’s not just the language, but women’s culture, resources — everything is different,” explained Weinberg, author of the Hebrew edition, at a recent health symposium hosted by Boston University, celebrating the 40th anniversary of “Our Bodies” and the release of the latest American version. This is true even among different groups of women within Israel. Elnabilsy, who is editor-in-chief of the Arabic edition and is also a social worker and sex educator, said that Palestinian women “are a national minority, and also a gender minority.” So the Arabic edition addresses the prejudices that Palestinian women face — both in the wider society and from men within their own community.

The idea for the Hebrew-Arabic versions was born a decade ago when Weinberg, now 40, received a copy of an American version of “Our Bodies” from a friend. Having recently given birth, she felt frustrated and depressed by how medicalized the experience had been. “I didn’t know that labor could be an empowering, amazing experience,” Weinberg said. Inspired, she chose home births for her next two children, and began researching ways to bring the book that changed her life to other women in Israel.

In 2005, Weinberg founded the Israeli nongovernmental organization Women and Their Bodies in order to create the Hebrew and Arabic editions. “We cannot talk about women’s health in Israel without addressing Palestinian women’s health issues,” Weinberg said. She recruited Elnabilsy, a former student whom Weinberg knew from her previous job as director of the Women’s International Zionist Organization’s School for Political Leadership for Women, to spearhead the Arabic adaptation.

The first meeting was held at Neve Shalom/Wahat al-Salam, a village halfway between Jerusalem and Tel Aviv that was jointly established by Jewish and Palestinian-Arab citizens of Israel. It was a symbolic choice in a country where geography is a matter of life and death, made by activists acutely aware of the imbalance in resources available to women from their respective communities.

For example: Elnabilsy points out that she interviewed women who had given birth in hospitals where they didn’t understand a word the doctors were saying. “They spoke with them in Hebrew, and gave them papers in Hebrew, and they asked them to sign papers in Hebrew,” she said. “And sometimes they signed and the doctor did whatever he wanted” because the women were too intimidated to ask for a translator. The Arabic version includes information on how to navigate the health care system in a country in which Palestinian women are a minority.

Although the women pool their resources as a single organization, Weinberg said they have agreed “to work together, and apart.” With 350 volunteers, the Hebrew team had so much material that the finished book, at 26 chapters, can’t contain it all. An additional 10 chapters will be published as booklets in the coming years.

Weinberg said, however, that “in Arabic, you cannot have so many volunteers, because women don’t have the resources to volunteer.” What’s more, because the process she and Elnabilsy employed has been to adapt the English version into Hebrew and then the Hebrew version into Arabic, help is needed from people facile in all three languages. With 30 volunteers working on the Arabic translation, that edition has only 10 chapters. Still, this marks the first time that a women’s health resource written by women for women has been published in either language.

The feat is substantial, according to Lucy Candib, a physician who wrote an introductory essay, “Women, Medicine and Capitalism,” in the original pamphlet. “The close and careful creation of text together will require a constant consciousness about power and vulnerability familiar to women everywhere, but even more ever-present in the world where this work will be created,” she said.

Women and Their Bodies received a grant from the Rosa Luxemburg Foundation to distribute the first 1,000 copies of the Arabic-language books for free. (The Hebrew edition costs $50.) With the goal of making the books as accessible as possible, the organization is seeking grants and donations.

In addition to producing the books, Women and Their Bodies runs an online information center (which has been hacked multiple times since the book was published) and an ongoing series of health workshops designed for women of various ethnic groups throughout Israel. One, designed to address the frustrating lack of a nonderogatory or childish Hebrew word for “vagina,” was called, “What Is Between Your Legs?” Weinberg’s favorite word to come out of this workshop is n’ga, derived from oneg, the Hebrew word for “pleasure.”

The women also coined new words for “menopause” in both languages. In Arabic, they chose sinn al-amman, the “age of confidence.” This connotes “having a center, knowing who you are, and where you want to go,” Weinberg said. In Hebrew, the team chose emtza chayim, the “middle of life.” Or, Weinberg said, the age when “you have everything ahead of you.”

Beth Schwartzapfel is a freelance writer based in Boston.

‘Our Bodies’ Gets an Israeli Makeover