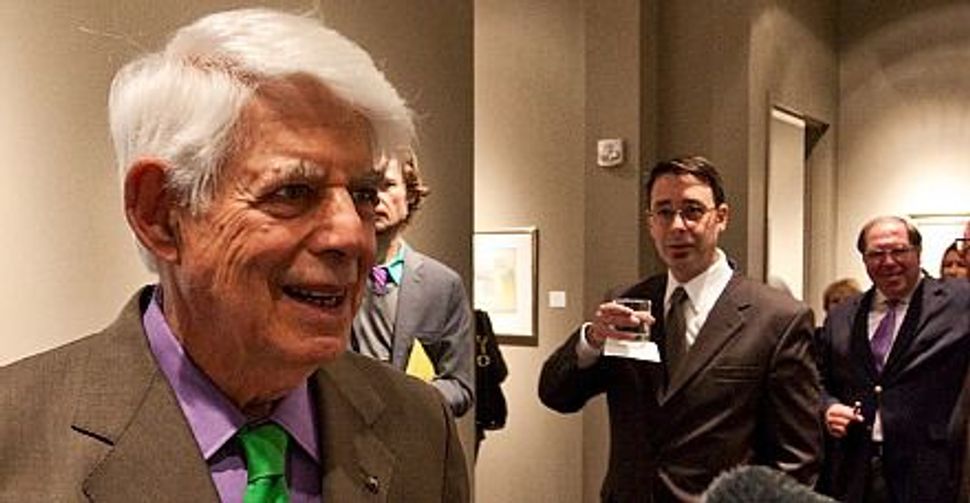 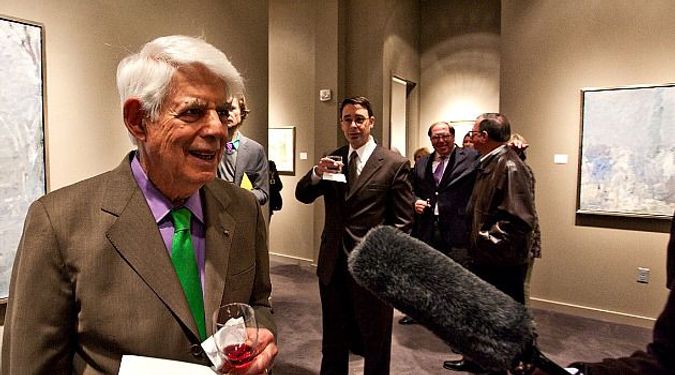 Wolf is at your door. At least it feels that way after the summer exhibit ?Wolf Kahn: Color & Consequence,? at the Ameringer | McEnery | Yohe gallery, in Manhattan?s Chelsea, and the September release of a revised edition of the definitive ?Wolf Kahn? by Justin Spring with Karen Wilkin and Louis Finkelstein.

Kahn, born in Stuttgart in 1927, has become one of America?s most striking landscape and color field painters. He has created pastels and paintings inspired by travels across America, and these in turn have sparked a number of Abrams books culminating in this latest release. If he does not seem omnipresent enough, Kahn-o-philes can even purchase a calendar from Pomegranate Press featuring reproductions of his dazzling works. 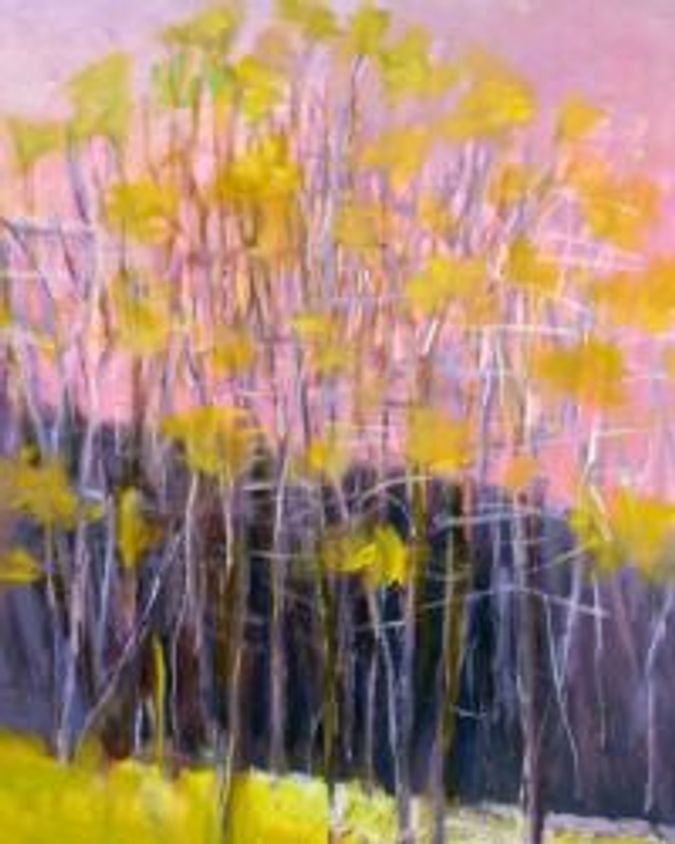 Image by Courtesy of Reynolds Gallery

Yet Kahn?s work goes far beyond the seductive colors that lure art lovers. Complexity and contradiction are the hallmarks of his decades of work, as indicated by Kahn?s stated goal of ?painting [Mark] Rothko over again from nature.? Echoing the ominous dread found in many Rothko canvases, Kahn?s depictions of rural barns can be surprisingly menacing. And in his art, dark foreboding often accompanies brilliant light. This duality is echoed by the fact that Kahn is a Manhattanite painter of the country, as he tells Spring in ?Wolf Kahn?: ?The environment in which my paintings grow best is at Broadway and 12th Street. I can see nature most clearly in my studio, undistracted by trees and skies. Art being emotion recollected in tranquility, I constantly find Nature too emotional, and Broadway very tranquil.?

This paradoxical urban sophistication of Kahn?s nature paintings is part of their multifaceted appeal. Finkelstein quotes Kahn?s friend and fellow estival Vermonter, art historian Meyer Schapiro, who said once at a Kahn exhibit: ?Look! He makes the abstraction and representation at the same time.? Simultaneity of opposites in Kahn?s life includes respect for, and concomitant resentment against, his father, Emil Kahn, a musician who guest-conducted the Vienna Philharmonic, London Symphony and NBC Symphony, but wound up with a paltry career as the author of textbooks and recordings for the Music Minus One series of Mozart, Schumann, and CPE Bach, a useful, but low-paying way to help tyro soloists practice with orchestral accompaniment. The elder Kahn, who died in 1985 at age 88, failed to encourage Wolf to become a musician, and his own career had crashed because he ?was too temperamental,? Kahn tells Spring.

An unassertive white-haired man with a deceptively folksy Mister Rogers manner, Kahn underplays his own temperament and his boyhood trauma of seeing demonstrators shot in the streets in 1932 outside his grandmother?s Frankfurt home. As a boy, Kahn was once knocked off his bicycle and beaten by German adults because he was not wearing a Hitlerjugend uniform. In the summer of 1938, Kahn was denied the opportunity to experience nature after a Nazi decree banned Jewish children from taking summer holidays outside the city. His subsequent lifelong immersion in nature after reaching America in 1940, both as part-time resident and as interpreter, is an enduring response to this early frustration.

Other torments festered inside him, as Kahn confided during a 2006 lecture at Keene State College, New Hampshire, ?Growing Up Privileged, and Jewish, in Nazi Germany.? Kahn described his youth as ?precariously happy?; his grandparents were later murdered at Theresienstadt, and had Kahn not been rescued on a 1939 Kindertransport to England, he informed the audience, he would have wound up a mere ?heap of ashes.? Kahn heartbreakingly added: ?Most of the rest of my life has been devoted to trying to forget that I am a Jew?. One of the things that having been the victim of persecution [does is] make you become afraid of your own group. So I?m a bit of an anti-Semite?. I?m sorry I have to tell you this because it?s sort of indecent almost to say it.?

The accuracy of this self-evaluation is debatable, since Kahn never changed his name, unlike many artists of his generation, who did so to conceal their Judaism. Seeking a father figure in art in the 1950s, he did select a Bavarian Catholic, Hans Hofmann, a famed teacher and overbearing personality who precipitated a crisis in the younger painter. At first, Kahn recalls, ?I did my normal German-Jewish schoolboy thing, trying to do what the teacher tells you.? He recalled how, striving to imitate Hofmann by adopting a wildly flamboyant artistic persona for himself, ?I found out that I wasn?t really Van Gogh, so I decided maybe I should try to be [Chaim] Soutine, because at least he was Jewish.?

For a time, Kahn became depressed, kleptomaniac and sexually impotent, and suffered from other symptoms of identity confusion. After a spiritually cleansing interlude working as a logger in the forests of the Northwest, he was inspired to start drawing again, and so he returned to painting, as he told NewArtTV: ?I got all my yichus [lineage] back!? Part of this yichus involved relishing the unbridled sexual expression of the 1950s art world, in which gender definitions were sometimes overlooked, as in the cases of Kahn?s friends, painters Fairfield Porter and Larry Rivers (born Yitzhok Loiza Grossberg). Although both were married with children, Porter and Rivers had male lovers. One of Rivers?s longest relationships was with the writer, poet and art critic Frank O?Hara, a promiscuous imp whom Kahn portrayed in a formal oil-on-canvas, finished in 1954. In it, O?Hara sits with the weighty aplomb of Gertrude Stein.

Such investigations into nonconformist sexual identities were natural for Kahn, who has made candid remarks about the unconscious erotic symbolism of some of his works. Of one landscape, he told NewArtTV, ?It?s indecent; old ladies would get upset,? and of another, featuring a central tree, ?It was again one of those sexual things ? you know, where I thought a tree in the middle represented something, but only maybe as a second thought; that?s not what got me started.? This comfortable approach to sexuality coincided with Kahn meeting and marrying (in 1957) a brilliantly talented artist in her own right, Emily Mason.

By contrast to his romantic resolution, the tormenting quest for a protective mentor/father figure persisted until the 1960s, when Kahn?s still-struggling career was transformed by a collector, Martin Ackerman, author of ?Money, Power, Ego: A Manual for Would-be Wheeler-Dealers.? Ackerman, who died in 1993, was a business world shark, seemingly the opposite of the soft-spoken, unassertive Kahn, yet he took the artist?s career in hand, making it possible for Kahn to thrive financially in later decades.

Still hard at work in his downtown studio, despite the challenge of macular degeneration that started in the late 1990s, Kahn is now producing works that are among his most exuberantly confident. He claims that this affliction actually improves his art, because his reduced vision makes it impossible to obsess over insignificant details. Not coincidentally, Mason, 79, is also producing self-assured, energetic color explorations, among her finest ever.