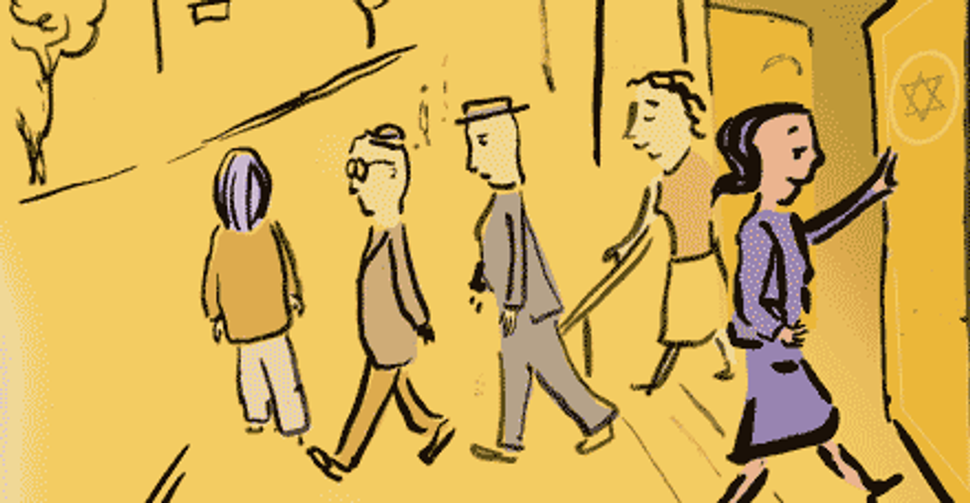 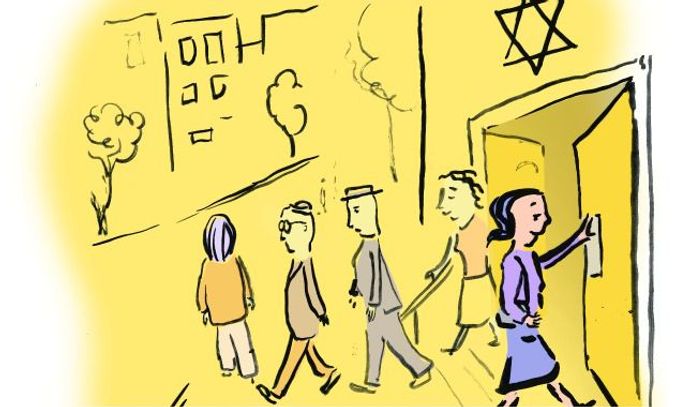 My friend and I go to the same synagogue but almost never run into each other. “How come?” I was musing the other day.

Aha! That explains it! When she’s walking out, I’m walking in.

Yes, I’m one of those synagogue goers who arrive pretty much just in time for the “Amen!” as we raise our mini plastic cups of wine before elbowing our way — er, gently sauntering over — to the food. My timing is never quite exact, of course, so there are days when I get there and my fellow congregants are still singing “Adon Olam,” the last song of the service. I’m happy to sing along — in fact, I like it if I’m in time for Kaddish and the announcements; makes me feel very much a part of things. But for shallow, antsy and kind-of-cheap me, going to synagogue means going to lunch with friends, there, in the social hall.

And how important is the quality of that lunch? Let’s just say that a tray of hummus and carrot sticks makes my spiritual aura shrink to the size of a store-bought gefilte fish ball. You could pierce my soul with a toothpick. But a glistening mound of bar mitzvah lox — the Holy Grail, as it were, of Kiddushes — maketh me skip through the Valley of Death and cartwheel over to the scallion cream cheese. It restoreth my soul and maketh my kids a lot happier about my bringing them along, too. In fact, it getteth them psyched to come again, the way a random shower of slot machine nickels getteth bubbe back to Atlantic City. And I know that I am not the only congregant who peruses the synagogue calendar to see who has a great big spread — er, great big simcha — coming up, and precisely which Saturday we are talking about.

My worry, of course, is that the Divine One is probably not thrilled with the attendee who arrives when the audience is filing out of the theater. Come to think of it, the rabbi probably isn’t, either. But I do believe there is something more than just lip service (and Tam Tams) being offered when a congregant arrives in time only to eat and shmooze. And, I am glad to say, some folks agree with me.

“Kiddush is not just a snack. The word ‘kiddush’ is from ‘kodesh,’ meaning ‘holy,’” says Elliott Katz, author of “Being the Strong Man a Woman Wants” (Award Press, 2005). (It’s also a good idea to be the rationalizing man a woman wants.) “Going just for kiddush is a lot better than not going at all.”

Hear, hear! Maybe it’s not quite as holy as actually participating in the service, but a couple of transcendent things are indeed going on, says Alan M. Singer, author of the recently published “Creating Your Perfect Family Size” (Wiley). First, he says, “It’s the central opportunity in a normal week to socialize with other Jews on a large scale, and I think that’s holy.” Then, too, consider the fact that many Kiddushes are sponsored in honor of an event, or a person.

If the event is a happy occasion, you’re joining in a celebration. It’s a mitzvah, like dancing at a wedding. But if it’s in memory of a person, just being there could be even more significant, because when you say the blessing over the wine or the bread or even the Costco celery sticks, you are adding that prayer to all the prayers being said sort of on behalf of the departed. Which somehow — I was never quite clear on this or on any part of the hereafter where our peeps are concerned — can help the dearly departed only in the afterworld. (Which we don’t believe in. Or do we?) Anyhow, it’s like the dead man given an enema in the classic Jewish joke: Even if it can’t help, it couldn’t hoit.

Then, too, adds Gigi Cohen, a Chicagoland mom of three, quoting her cousin the rabbi, who gets things going Saturdays at 9 a.m.: “If you want a one-hour service, come at 11.”

Vermont rabbi (and stand-up comic) Bob Alper agrees: Shorter services make folks more punctual. But he also reminds us of the quote from writer/publisher/convict/satirist Harry Golden, whose atheist father attended synagogue religiously: “One day he asked his dad why, if he didn’t believe in God, he went to shul. The reply: ‘Everyone goes to synagogue for a different reason. Garfinkle goes to talk to God. I go to talk to Garfinkle.’”

Exactly! And if I am one of the last to arrive at synagogue, I should add that I am also one of the last to leave, because my synagogue is full of Garfinkles. I love talking to them, hearing all the news, being part of an ongoing community. If I also happen to be surrounded by bagels and lox, well, my heart opens wide.

And sometimes, so does my tote bag.

Lenore Skenazy is a public speaker and author of the book Free-Range Kids (Wiley, 2010) and of the blog of the same name.