Exploring Ties Between Halacha and Shariah 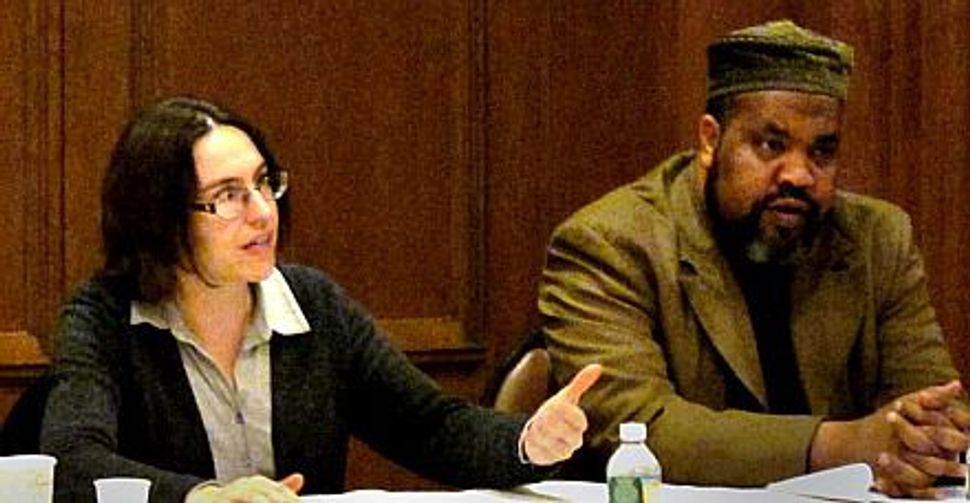 Abraham and Isaac — or, as some would have it, Ibrahim and Ishmael — took center stage when a panel including Muslim imams and some of America’s most prominent Modern Orthodox rabbis discussed their respective legal systems and foundational texts, and their implications for Jewish-Muslim relations today.

The October 30 seminar “Ancient Texting” brought together 15 rabbis expert in Halacha, or traditional Jewish law, and 15 imams steeped in Shariah, traditional Muslim law, for a recent daylong seminar at Manhattan’s historic Temple Emanu-El, a Reform congregation. Much of the day’s discussion, which also included notable Conservative and Reform participants, was theoretical and textual in nature. But conversations often also revolved around practical issues concerning both communities and on areas of conflict between them, such as differing positions regarding Israel, and problematic texts in the tradition of each faith.

The public part of the daylong seminar used the biblical Abraham’s willingness to sacrifice his son, Isaac — or his half-brother Ishmael, as recounted in the Quran’s narrative — as a frame to discuss religious extremism. Muslim panelists spoke of the resurgence of a concept known as ijtihad, or self-adjudication of religious law, in the Muslim community as playing a role in this resurgence.

“In order to understand the text, we need to read the whole text,” said Imam Mohamed Hag Magid of the All Dulles Area Muslim Society. “People take a verse in isolation. If somebody’s not going to counter that, you’ll have [Anwar] al-Awlaki,” he said, referring to the Yemen-born American-Muslim leader recently assassinated by an American drone plane in Yemen after he became a spokesman for Al Qaeda in the Arabian Peninsula. “If everything goes, you have bin Laden.”

Magid noted the problem of Muslims referring to “Sheikh Google” for legal answers, and criticized some of his own congregants who suggest that the Quran permits men to hit their wives — something he said the Prophet Mohammed would never do.

Rabbi Shaul Robinson, spiritual leader of Manhattan’s Lincoln Square Synagogue, also focused on text and context, citing two variant commentaries on God’s drowning of the Egyptian army in the splitting of the Red Sea. One commentary stresses the Egyptians’ wickedness, but in the more famous one, God silences the angels’ celebrations as the Egyptians die, admonishing them that “my creations are drowning in the sea.”

“All children come home learning that God silenced the angels,” Robinson said, explaining the pre-eminence of the latter commentary. It is Jewish educators’ emphasis on that account, which frowns on celebrating death, that demonstrates a conscious decision to emphasize positive values in problematic texts.

“What has critical importance is what is consistently mainstream,” Robinson said. “Communities don’t have the ability to throw away texts. We have to have reverence and a healthy sense of skepticism and detachment.”

Most of the panels were closed to the public in order to facilitate open discussion between the scholars, among whom were some of the most prominent American clergy from each tradition. On the Jewish side, participants besides Robinson included Rabbi David Silber of New York’s Drisha Institute, an adult yeshiva program that caters particularly to women, and Rabbi Saul Berman, a senior faculty member at Yeshivat Chovevei Torah Rabbinical School. Not all participants in the closed session, which included at least one nationally prominent and respected Orthodox personality, would agree to to be publicly identified, illustrating continuing sensitivity within the Orthodox community to meetings with Muslims.

Among the Muslims, participants beside Magid included Boston University professor of religion Kecia Ali; Ebrahim Moosa, a professor of Islamic studies at Duke University, and Imam Abdullah Antepli, a chaplain at Duke and a co-organizer of the event.

“It seemed to me that with all of this hullabaloo about the state of Shariah and American law, it was a very propitious moment to think about the commonalities and differences between Shariah and Halacha,” said Marshall Breger, a professor of law at Washington’s Catholic University of America, the Jewish co-organizer of the conference, which was sponsored by the Center for Interreligious Understanding. “A threat to one minority is a threat to others.”

Breger, an Orthodox Jew who served as a senior appointee in the administrations of Ronald Reagan and George H.W. Bush, has recently directed his efforts toward Jewish-Muslim dialogue. A group of imams he organized and guided on a tour through Auschwitz last year issued a statement condemning anti-Semitism and Holocaust denial after their visit. Many of them also participated in the Temple Emanu-El gathering.

The seminar included sessions on the two law codes, on combating anti-Semitism and Islamophobia, and a public panel on the interpretation of foundational religious texts.

Breger said he hoped the conference, and others planned like it, could help counter rising currents of religious hate — including proposals in the United States to ban Shariah courts. Breger said that the scholars agreed to issue joint statements in the future in response to attacks on religious groups. They also pledged to increase education efforts to promote tolerance among youth in their respective communities.

Jerome Chanes, senior research fellow in Jewish studies at CUNY and Contributing Editor at the Forward, who gave a lecture on the relationship between anti-Semitism and anti-Zionism, said after the event that Jewish groups should consider working with Muslim groups on issues of shared concern even when the Muslim groups hold positions on Israel to which they object.

The question of meeting with Muslims who reject or strongly criticize Israel “needs to be on the table for American Jewish organizations,” Chanes, one of the non-Orthodox participants, said. “It depends on the issue, how crucial the issue is for the health of the polity in general. In terms of the Muslim organizations you want to sit down with, how radical are their views?”

Rabbi Jack Bemporad, executive director of the Center for Interreligious Understanding and moderator of the panel, said that the Jewish and Muslim communities must find common ground before approaching contentious issues such as the Israeli-Arab conflict.

“In Christian-Jewish dialogue, first it was about all those things we agreed on, and then gradually we got to issues like, ‘What do you think about Jesus?” Bemporad, a Reform rabbi said. “We didn’t want to move mountains; we wanted to climb a hill. Hopefully there’s a bigger hill next time.”

Exploring Ties Between Halacha and Shariah