A (Limited) Promise of Marriage in Israel 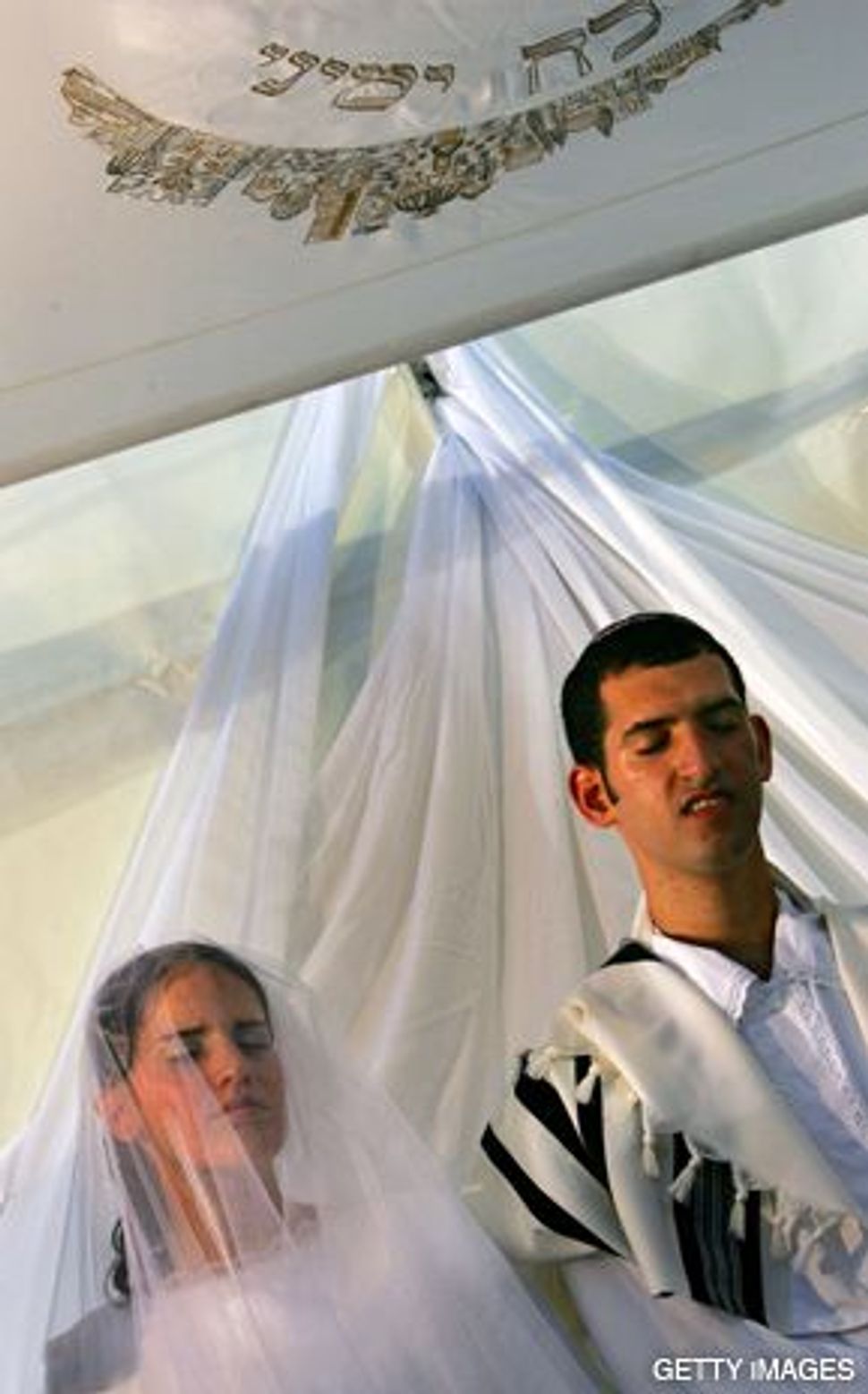 NEW VOWS: Weddings like this in Israel have always ocurred under the authority of the Orthodox chief rabbinate, but that may change.

Haifa, Israel — The promise of marriage may not be the most conventional commitment to make during an election, but Foreign Minister Tzipi Livni has decided that it will prove a winning formula in Israel. 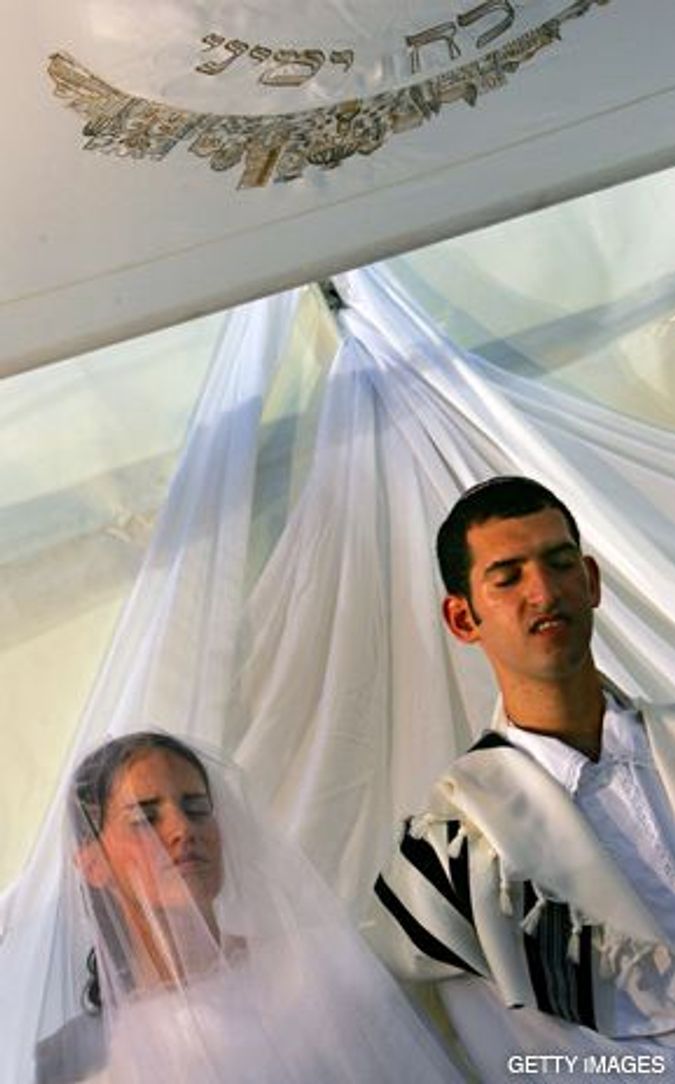 NEW VOWS: Weddings like this in Israel have always ocurred under the authority of the Orthodox chief rabbinate, but that may change.

The Kadima party leader has pledged that if she wins in the February general election, she will enable 350,000 citizens who have no way of getting married in Israel to tie the knot.

Those citizens are immigrants, or the children of immigrants, from the former Soviet Union who are Jewish according to civil law but not according to religious law. This means they are unable get married through the Israeli chief rabbinate, which shares the monopoly on marriage with churches and mosques.

According to Livni’s promise, made on October 29, people who find themselves unable to get married will, for the first time, have the right to a civil marriage. She announced her plan on Israel’s Russian-language television channel, and it has been widely viewed as a maneuver intended to win over citizens from the former Soviet Union in advance of the impending national elections.

But there is a catch, and some members of the Russian-speaking community who have read the small print of her plan are less than impressed. It turns out that under the plan, the 350,000 people caught in the marriage trap are to be allowed to marry only each other. This is because Livni is determined not to violate the taboo on intermarriage, which she would be seen as doing if these people were allowed to marry Israelis who are Jewish by Orthodox law.

“This doesn’t help. It leads to the formation of a new minority in Israel,” said Ludmilla Oigenblick, the activist who raised the importance of civil marriage to the Russian-speaking community during a meeting with Livni a few days before her announcement.

Israel, in its 60 years of statehood, has never overhauled its system for registering marriages, which it inherited from the Ottomans via the British. Only religious authorities — the Orthodox-controlled chief rabbinate, mosques and churches — have the power to solemnize marriages.

Among the most ardent opponents of this situation have been the Reform and Conservative movements. Both movements are prevented from officiating at weddings in Israel by the Orthodox lock on religious authority in Israel.

“Israel is the only country in the Western world in which people cannot marry according to their wishes and people from different faith cannot establish their partnership,” said Gilad Kariv, associate director of the Israel Religious Action Center, which is the Reform movement’s lobbying arm and one of the leading pressure groups promoting civil marriage.

Kariv was as outraged as Oigenblick about Livni’s proposal, saying that it will create a “ghetto of people who are not able to get married through Orthodox means.”

Campaigners have long opposed the current state of affairs, which they term religious discrimination. But in the 1990s it was transformed into a highly practical matter as a result of the mass immigration from the former Soviet Union.

The Law of Return, passed in 1950 to facilitate the Zionist vision of “ingathering the exiles,” welcomes to Israel people who have a Jewish father or one Jewish grandparent, even if they do not meet the religious criteria for being Jewish — namely, having a Jewish mother or having gone through conversion.

Before the 1990s, virtually every Israeli had a way of getting married. Israelis would turn to the authorities of their faith even if they were secular in their everyday lives. Many of the immigrants who arrived from the former Soviet Union, however, were not Jewish in the eyes of the rabbinate and therefore not marriageable. And though the Knesset proposed various solutions, none has yet succeeded.

“This has been a problem for years for immigrants, but now we are also starting to have children who were born here, raised in Israel as Hebrew-speaking citizens of this country, who just can’t get married. It’s ridiculous,” said Oigenblick, who heads a pressure group called the Association for the Rights of Mixed Families.

Israelis who cannot marry in the country tend to choose one of two options: to shun marriage and live in civil law partnerships, or to travel abroad — usually to Cyprus — for a civil union, which Israel then recognizes.

In 1997, a total of 2,000 couples traveled abroad to wed. In recent years, the figure has swelled to between 5,000 and 6,000 couples. Around a third of these are Russian speakers caught in the marriage trap; another third are Israelis who want to intermarry, usually to a non-Jewish spouse they met abroad. The remainder includes couples that wed through the Reform or Conservative movement.

The Knesset’s Constitution, Law and Justice Committee chairman, Menahem Ben-Sasson, one of Livni’s allies, told the Forward that the civil marriage provision under discussion will be “the first law I will put on the Knesset table” if Kadima wins the election.

Asher Arian, a senior fellow at the Israel Democracy Institute who has written on civil marriage in Israel, told the Forward that the move suggests Kadima’s need to secure votes from varied groups for the elections that will be held early next year.

According to Arian, the reason Livni cannot be seen to promote intermarriage is that she wants to keep religious voters happy. But Livni also understands that the 750,000 Russian-speaking voters “will be an important group in the election.”

Ben-Sasson admitted that some will criticize the new plan because it provides a solution for only 350,000 Russian speakers who are unable to marry and not for others who want a civil marriage.

“Our society is not ripe to develop it for all citizens, but we cannot leave these 350,000 unable to get married,” he said.

He said that Kadima cannot open a can of worms by legislating for intermarriage. “This is the other side of the slippery slope, and we are not ready to deal with it at the moment.”

This approach means that the chief rabbinate, usually the first to defend its monopoly on marriage, was ambivalent in its reaction to Livni’s plan.

“We will see the plan before it goes to Knesset, and the chief rabbis will say whether they consider it legitimate,” said a spokesman for Yona Metzger, the Ashkenazic chief rabbi. Some activists for civil marriage have welcomed the plan as better than nothing. Eli Zarkan, who heads the Association for Immigrant Children, a pressure group for immigrants from the Eastern bloc and their children, said, “We are talking about steps toward a solution, and even small steps break the wall we now face.”

But Kariv said it keeps an outmoded system in place.

“As a rabbi,” Kariv said, “I don’t want intermarriage, but that’s a religious and not a legislative matter. Do we live in Saudi Arabia?”

A (Limited) Promise of Marriage in Israel