Baked With History and Ready To Eat 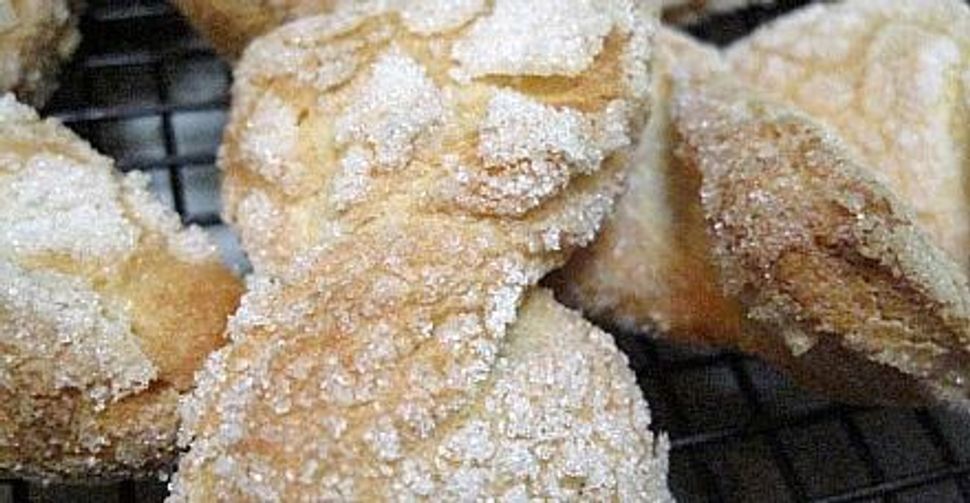 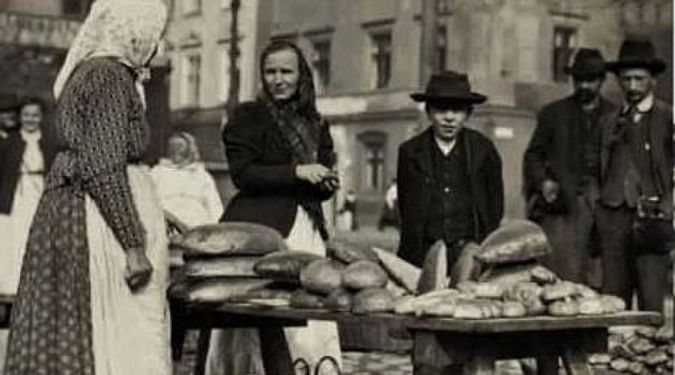 Loafing Around: A Jewish breadseller does business in the Polish city of Krakow around 1910. Image by Tomek Wisniewski

I did not grow up in a house bathed in the scent of freshly baked bread. My mother, an otherwise gifted cook, chose not to fuss with yeast or starters, which means memories of steaming-from-the-oven challah, rye bread and babka are not woven into my childhood nostalgia. And yet the hunger for baking must burn somewhere deep in my gut, because last autumn, when the weather turned cold, I felt pulled to the oven with a yearning that only the alchemy of transforming flour, water and fire into bread could pacify.

If only I had had a copy of Stanley Ginsberg and Norman Berg’s “Inside the Jewish Bakery: Recipes and Memories From the Golden Age of Jewish Baking” to guide my first attempted loaves. Published in October by Camino Books, the cookbook places the wisdom and skill of a centuries-long Jewish baking tradition in the hands of the reader. The book begins with the memory of the now mostly vanished bakeries that, along with the greengrocer and kosher butcher, once existed at the core of Jewish communal life. It recalls the days when bakers kneaded piles of sticky rye dough and formed tray after tray of hearty pumpernickel rolls; when customers purchased warm challah for the Sabbath, and when fathers stopped in with their children Sunday afternoons for an apricot-glazed Danish or an egg kichel, a bowtie cookie. A time, as the book’s introduction reads, “when life was slower and simpler… [and] in the bakeries, everything was made from scratch, and tasted like it.”

But lest things get too heavily dusted in powdered-sugar nostalgia, “Inside the Jewish Bakery” also offers an encyclopedia of formulas for familiar and forgotten treats (kornbroyt, corn rye or Krakover twisted bagels, anyone?), as well as step-by-step photographs and trouble-shooting tips. Unlike the proverbial Jewish grandmother who promises to give you her recipe straight, only to leave out a key ingredient, “Inside the Jewish Bakery” does not hold back secrets. As Berg told me, “The book was about preserving memories, so the last thing we wanted was to include recipes that would not work.” 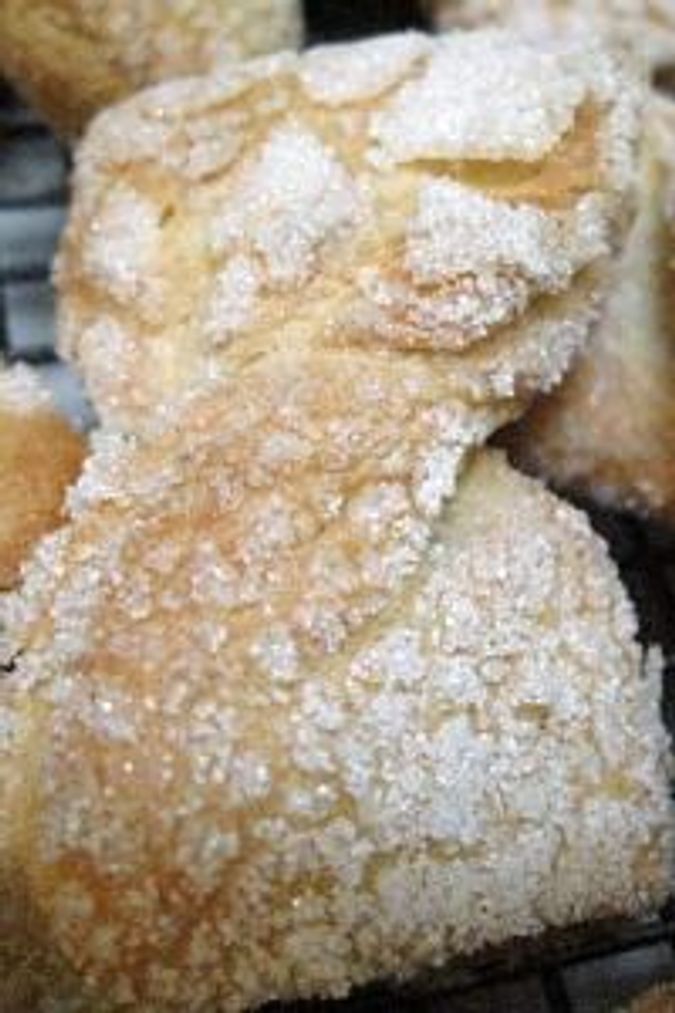 Kichlach are so crunchy and sweet, it?s hard not to eat a plateful. Image by David Snyder

Berg and Ginsberg represent two ends of the baking spectrum. Ginsberg, who grew up in Brooklyn and now lives in California, is a devoted amateur who remembers baking with his grandmother when he was a child (“She always gave me a little piece of whatever bread or cookie dough she was using,” he said); he discovered a love of back-to-the-land baking as a coop-dwelling graduate student in the 1960s. A few years ago, he founded a buyers club called New York Bakers to help other hobbyist bread enthusiasts source hard-to-find ingredients at a fair price. Berg, a Bronx native who still resides there, is a retired professional baker who started working at Zlotnicks bakery (now extinct) when he was only 16. He has clocked in hours at nearly a dozen kosher and Jewish-style bakeries during his tenure, cranking out the breads and pastries that shaped the salivary glands of a generation.

Reading “Inside the Jewish Bakery,” one senses that Ginsberg and Berg have been friends for years. In a way, they have: Both are native outer-borough New Yorkers who were weaned on seeded rye slathered in schmaltz. And yet, remarkably, the pair has met face to face only twice, and first interacted just three years ago, through an online bakers’ forum. Ginsberg asked for Berg’s recipes for onion rolls and Russian coffee cake; Berg replied in kind, and the rest is history.

Over nearly two years of lengthy phone calls they discussed bread, of course, but also shared stories of their lives and of their families, and memories of the city that raised them. Their deepening friendship fueled the project, allowing two voices to merge into one impassioned ode to the Jewish bakery. Berg lent his professional credentials, as well as his insider’s glimpse into the magic that occurs in a bakery while everyone else is asleep. Ginsberg brought his penchant for research and writing, and the fortitude to translate a lifetime of recipes written on scraps of paper or pulled from Berg’s memory into something useful for the home cook. “The book represents the marriage of two guys with very different experiences, but who share the love of the same woman,” Ginsberg said.

Of course, “Inside the Jewish Bakery” is neither the first nor the fanciest book to cover traditional Jewish baking recipes. Its predecessors “Secrets of a Jewish Baker” (1993) by George Greenstein, Marcy Goldman’s “A Treasury of Jewish Holiday Baking” (1998) and Maggie Glezer’s “A Blessing of Bread” (2004) are all baking bibles in their own right. But Berg and Ginsberg’s particular blend of personal experience, history and practical baking science sets it apart. For old-time New Yorkers, it reads like a personal diary, long since forgotten in an attic somewhere. Ginsberg told me about an email he received from a reader in Atlanta whose family was once in the baking business. The reader wrote, “I just got a copy and haven’t read it yet, but my heart is pounding.” A few hours later, he wrote again: “I just finished the introduction. Your memories are mine.”

For my generation — the people raised on pre-sliced bread purchased at the supermarket — the book passes on techniques we never learned and recipes we have never heard of but somehow still sense to be right. And since tradition cannot exist in a vacuum, the recipes are also ours to innovate. Berg’s son, Nathan, 27, got the bread gene and now works as head baker at the upscale restaurant Vandaag, in Manhattan. He has built on the foundation his father gave him, merging time-honored techniques with innovative ingredients, like imported beers and seaweed. “He is taking bread to a whole new level,” Berg said proudly. Likewise, the book requests: “We ask that you follow these recipes exactly as printed, at least the first time, so you can experience yourself the feel and taste of a bygone time. Once you’ve tried it our way, feel free to experiment and turn the breads, rolls, pastries, cookies and cakes we remember so vividly into memories of your own.”

Recipe slightly adapted from “Inside the Jewish Bakery.”

1. Combine all the ingredients through the flour in the bowl of a standing mixer, and mix with the flat paddle beater set at low speed until dough is smooth and has a well-developed gluten, about 20 minutes.

2. Turn the dough out onto a well-floured work surface and knead for 2–3 minutes, until it no longer sticks. Cover it with plastic wrap or a damp cloth, and let it rest for 20–30 minutes to relax the gluten.

3. Preheat your oven to 350 degrees, and line two baking sheets with parchment paper.

4. Spread 1 1/2 cups of sugar evenly over your work surface, and roll out the dough to about 1/4-inch thick. Sprinkle the remaining 1 1/2 cups sugar over the top surface of the dough. Using a sharp knife or a pizza wheel, cut the dough into 1-inch by 2-inch rectangles. Give each strip a half twist to form the bowtie, and arrange on cookie sheets, about 1 inch apart.

5. Bake for 20–25 minutes, until the bowties are golden brown. It’s important that the cookies be fully baked, otherwise they’ll collapse when they cool. Remove to a rack, and let cool for 3–4 hours, until cold and thoroughly dried out. Store immediately in a Tupperware to retain freshness.

Baked With History and Ready To Eat