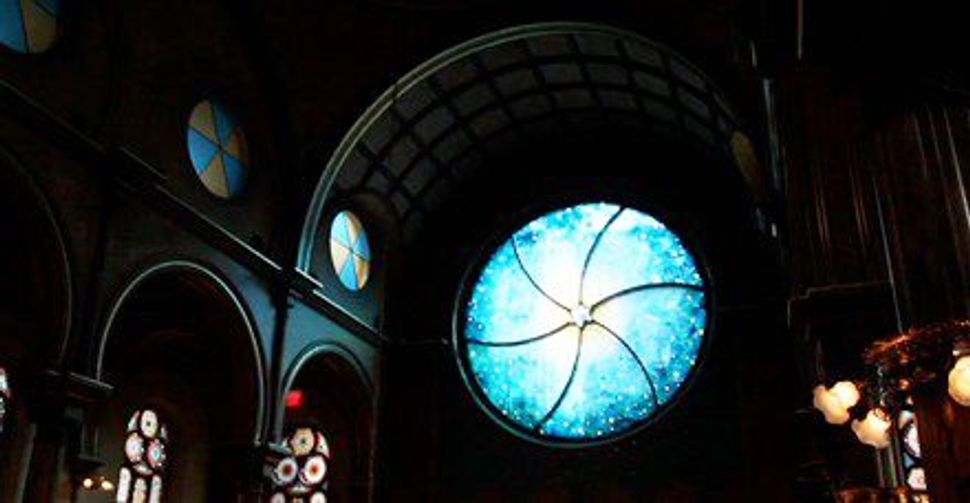 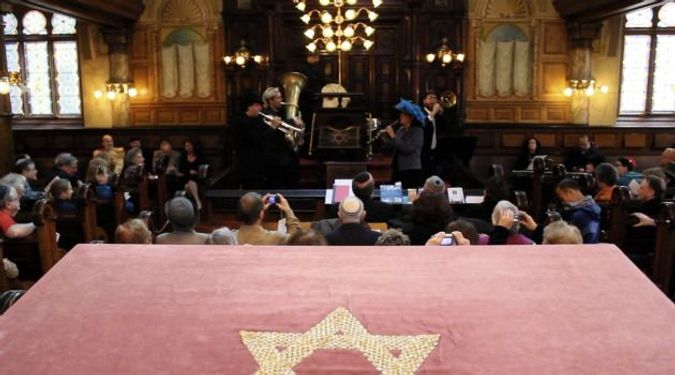 Recreating History: A klezmer band plays in the ornate sanctuary of the Eldridge Street Synagogue, which marked the 125th anniversary of its founding. Image by Nate Lavey

Outside the Eldridge Street Synagogue, it was a regular Sunday on New York’s Lower East Side, as residents and tourists picked their way past stands piled high with Chinese greens and five-and-dime stores bearing signs written in Mandarin.

Inside the historic sanctuary, visitors were transported back 125 years to the days when the signs were all in Yiddish and a group of neighbors came together to found the first great American house of worship built by Eastern European Jews.

The cornerstone-laying ceremony of 1886 was a festive affair with live music and a host of community leaders included in the program.

So on its anniversary, organizers from the synagogue — now also a not-for-profit organization known as the Museum at Eldridge Street — held a re-enactment, complete with klezmer music, speeches and fun. There was even an actor in period costume re-creating the speech given by the synagogue’s founding president, Sender Jarmulowsky.

“I can’t think of a greater symbol of our faith or our commitment to our community,” said New York Sen. Chuck Schumer, a surprise guest. “This is the cradle of American Jewry.”

Rabbi Joseph Telushkin paid tribute to a group of dedicated people who obsessively pursued the extensive renovation of the synagogue, which was completed in 2007.

“What can I say?” Telushkin said. “Thank God for meshuggeners.”

The day’s celebration, which was co-sponsored by the National Yiddish Theatre — Folksbiene, kicked off with a performance by Frank London’s Klezmer Brass All-Stars. The five musicians walked slowly through the striking main floor of the sanctuary, with its 50-foot vaulted ceiling, handsome wood fixtures and stained-glass windows. Once they passed the synagogue benches crowded with people, the band members made their way to the bimah and performed to the rhythmic claps of the enthusiastic audience.

Michael Weinstein, chairman of the Museum at Eldridge Street, gave the first of several speeches, thanking those who had given their time and money to the museum over the years. He recalled how far the synagogue had come since he first visited it, 22 years ago. “The building was in great disrepair, but had this power about it that emanated through the walls,” he said.

In a short documentary about the building, historian Roberta Brandes Gratz, who spearheaded the efforts to save the synagogue, also recalled her first time inside the then dilapidated synagogue sanctuary. “As we walked in, the pigeons just flew out from everywhere,” she said.

The synagogue had declined over several decades, due to a combination of the immigration quota laws in the 1920s, the Great Depression and a shrinking Jewish population on the Lower East Side. The renovation of the synagogue took 20 years and cost $18.5 million.

The building, a National Historic Landmark, was scrupulously preserved and garnered numerous awards for its restoration. Since then, more than 100,000 people have visited. 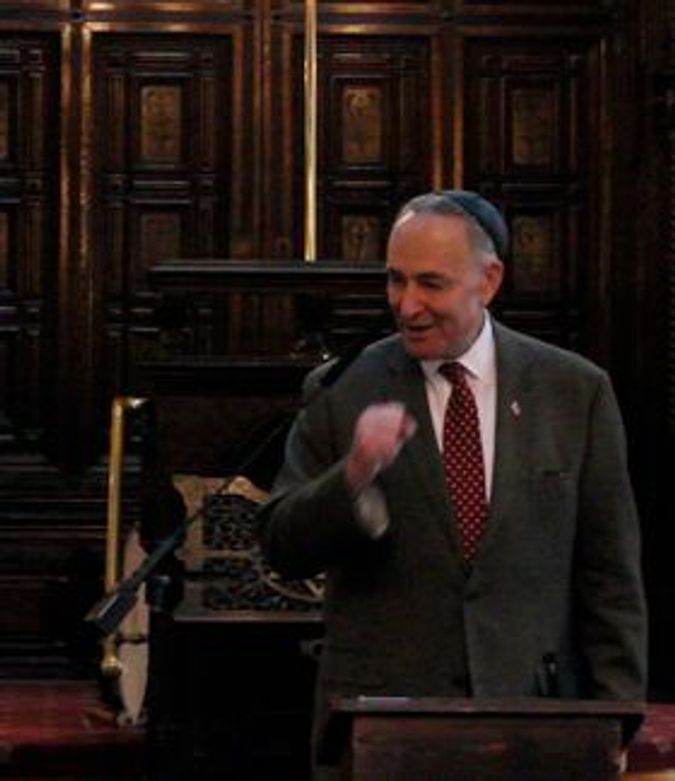 In keeping with the original cornerstone ceremony, Folksbiene actor Stuart Marshall, dressed in 1880s-inspired garb, played the part of Jarmulowsky.

Other treats would follow, including a tongue-twisting, comedic operetta performed in both English and Yiddish by Folksbiene member Stephen Mo Hanan, which produced hearty laughs from the mostly elderly, Yiddish-speaking audience members.

Telushkin praised the synagogue’s restoration for representing hiddur mitzvah, or, the beautification of a mitzvah. Restoring the Eldridge Street Synagogue would itself be a mitzvah, but to do so in such a beautiful manner was in the tradition of hiddur mitzvah, he said.

The ceremony concluded with cantorial music by Jeremiah Lockwood, remarks from Bonnie Dimun, executive director of the Museum at Eldridge Street, and the offering of many wishes to be included in a 125th-anniversary time capsule.

Max Fuchs, 89, had come to the day’s event with his wife, Naomi, and their children. A cantor for many decades, he recalled leading services at the Eldridge Street Synagogue in the 1940s, after returning from service in World War II. “I was the last cantor to conduct High Holiday services,” he said.

He gave his family members much credit for their part in keeping the Eldridge Street Synagogue alive even during its declining years. “My in-laws were big machers here,” he said, referring mostly to Morris Groob, a longtime congregant and leader at the synagogue.

At a crafts table nearby, a younger crowd was enjoying the tail end of the day’s events. Ronit Muszkatblit, 36, helped her 5-year-old son and 3-year-old daughter as they bound and decorated memory books with colorful scraps of paper.

Muszkatblit, who had been to the Museum at Eldridge Street on other occasions, said she thought the synagogue was a great destination for her children.

“It’s inspirational for them to look at,” she said, adding that she had found the program of events “very touching.”

As the autumn light faded, people filed out of the museum and back into the sights and smells of today’s Lower East Side. But inside the historic synagogue, a new group of visitors sat on the sanctuary’s carved wooden benches and listened intently to their guide.