Following the Path of Many Jews Before Him, Victim Went to India Seeking 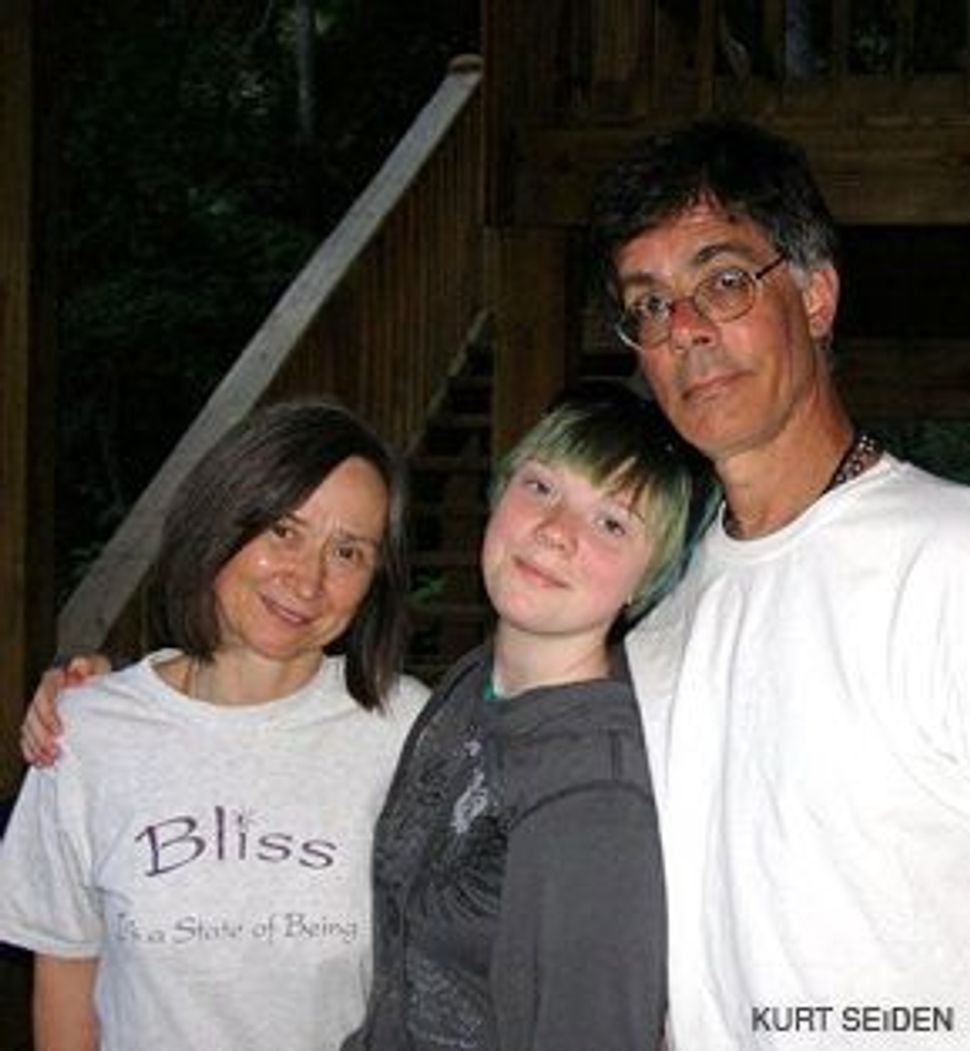 SEEKERS: Alan Scherr, right, his daughter Naomi, center, and his wife Kia in a family photo taken before Alan and Naomi?s recent trip to India.

The Chabad-Lubavitch emissaries who died in the terrorist attacks in Mumbai have been the most prominent faces of the Jews murdered there. But about two miles from the apartment building where the couple and four others died, the attacks claimed the life of another Jewish victim, Alan Scherr. His story, it could be said, represents a much more typical example of the Jews who find their way to India: the Jewish spiritual seeker. 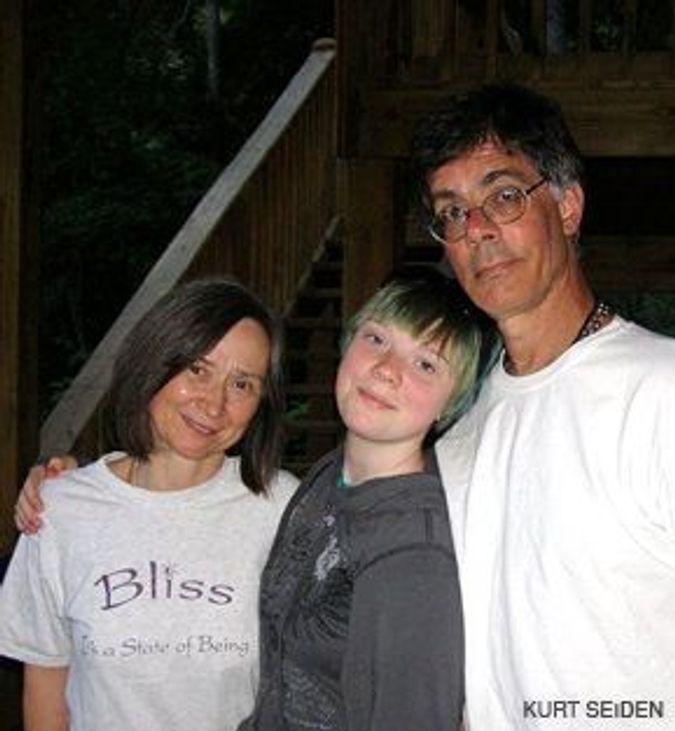 SEEKERS: Alan Scherr, right, his daughter Naomi, center, and his wife Kia in a family photo taken before Alan and Naomi?s recent trip to India.

Scherr, 58, and his 13-year-old daughter, Naomi were in India as a part of a retreat organized by the Synchronicity Foundation, a New Age group devoted to meditative practice. They died when a gunman opened fire in the Oberoi Hotel café where the father and daughter were having lunch.

The elder Scherr grew up in a traditional Jewish home, supplementing his public school education with Hebrew school at a local Orthodox synagogue. But like many other Jews, his spiritual path veered away from Judaism. Thirteen years ago, Scherr gave up his job as an art teacher in suburban Maryland and moved to the Synchronicity compound in Virginia’s Blue Ridge Mountains. He traveled frequently to India, which he considered a spiritual homeland, his brother, Marc Scherr, told the Forward: “India was to him what Israel is to us.”

While not all Jewish spiritual seekers end up embracing their quest for meaning as fully as Scherr did, Jews in recent decades have acquired a reputation for their interest in India’s spiritual side.

“Jews are very prominent in the Hinduism-for-export and the Buddhism-for-export movement — they’re leaders, they’re teachers,” said Rodger Kamenetz, the author of “The Jew in the Lotus,” the best-selling book-treatment of the topic. “I don’t know if it’s something in the Jewish soul or something in the Jewish genes, but we’re always looking for a comprehensive spiritual answer; we’re always looking for meaning.”

One indication of the flow of Jews to India is the 30,000 Indian visas issued annually to Israelis. In fact, the presence of the Chabad house in Mumbai was a testament to the numbers, given Chabad’s work in reaching out to spiritual seekers on the subcontinent; in addition to Mumbai, the Jewish outreach organization also maintains centers in the Indian cities of Anjuna Village, Bangalore, and Manali.

Kamenetz told the Forward that during a recent Passover spent in Dharamsala, India, a base for Tibetan Buddhists, the Jewish presence had been so large that there were two Seders.

Many rabbis and scholars trace the Jewish affinity for India and its holistic traditions to mainstream Judaism’s embrace of rationalism during the second half of the 20th century.

“Partly because of the aftereffects of the Holocaust, the Jewish people’s encounter with the ultimately irrational, there’s a hunger for spiritual answers that rational and philosophical religion cannot provide,” said Yossi Klein Halevi, a writer and senior fellow at the Shalem Center in Jerusalem who calls India his honorary spiritual home. “Those Jews who are not drawn to fundamentalist orthodoxy have had nowhere to go to seek deep spirituality. That accounts, in part, for the massive turn of Jews in our time to Eastern spirituality.”

While in recent years a number of Jewish synagogues and groups have attempted to incorporate mediation and chanting into Jewish ritual, Halevi said that those efforts have not yet proved widespread or deep enough to “draw our most serious spiritual seekers, and keep them within Judaism.”

For his part, Scherr’s latest trip to India came with a group of fellow Synchronicity members, whose practice centers on meditation enhanced with sonic technology, according to the organization’s literature. On the day of their death, the Scherrs had been attending a series of Mumbai-based workshops led by Synchronicity founder Charles Cannon, a self-described “modern mystic” and “high-tech guru.” The group had been scheduled to take part in the Cannon’s “Weekend Empowerment Program.”

Scherr was not the only Jew on the trip. The executive director of Congregation B’nai Horin in Los Angeles, Peggi Sturm, survived the siege on the Oberoi Hotel, where she was staying, inside her room —meditating and chanting silently, according to a recent email she sent to members of her congregation. B’nai Horin, a trans-denominational congregation is now raising money to benefit the families of the Synchronicity members who died and were wounded in the attacks, among other terror victims.

The lure that movements like Synchronicity hold for Jews has been a steady subject of discussion for rabbis and scholars. The executive director of the Jewish Spiritual Literacy in Baltimore, Rabbi Alexander Seinfeld, said that amid the struggle to survive in the Diaspora, many Jewish leaders have lost touch with the “meditative wisdom of our own traditions” — emphasizing rituals that many spiritual seekers experience as empty.

“There is nothing in Buddhism or Hinduism or yoga that is lacking in Jewish thought or teaching,” Seinfeld, the author of “The Art of Amazement: Judaism’s Forgotten Spirituality,” said. “But too many of our Sunday schools, our day schools, and our synagogues lack the institutional ability or knowledge to teach it to its members. It’s no wonder why someone like Mr. Scherr would grow up and say ‘Where do I find it? I didn’t find it in Judaism.’”

Scherr never disavowed Judaism, according to his siblings. While he had not been observant for decades and was not raising his daughter Jewish, he never expressed a desire to convert to another faith, they said.

Susan and Kurt Seiden, Scherr’s sister- and brother-in-law, had recently visited Scherr and his wife, Kia, at the Synchronicity sanctuary in Virginia.

“My experience there was that it was a non-religious place; it was peaceful, relaxing, spiritual, but not religious,” Kurt Seiden said. “I’m an Orthodox Jew. I keep Shabbat, I keep kashrut, and I felt comfortable there.”

Rachel Barenblat, a rabbinical student in the trans-denominational program Aleph: The Alliance for Jewish Renewal, said that Jews don’t have to choose between the spiritual offerings of India and Judaism.

“There is no disjunction,” said Barenblit, who has written about her own encounters with Eastern spirituality in India. “The American-Jewish community has gotten a lot better at integrating things. We don’t have to be threatened by practices that have a Buddhist connotation or a Buddhist flavor.”

But not everyone is so sanguine about the spiritual union. At a memorial service for Scherr, in Baltimore, the Orthodox rabbi who officiated the service, Rabbi Shlomo Porter, compared Scherr’s search for spirituality in Indian faith traditions to an old parable about a man who searches far and wide for treasure — only to find it within his own home: “The tragedy is that people are finding Eastern spirituality more accessible to them than Jewish spirituality, and that they feel it comes with less baggage.”

Following the Path of Many Jews Before Him, Victim Went to India Seeking