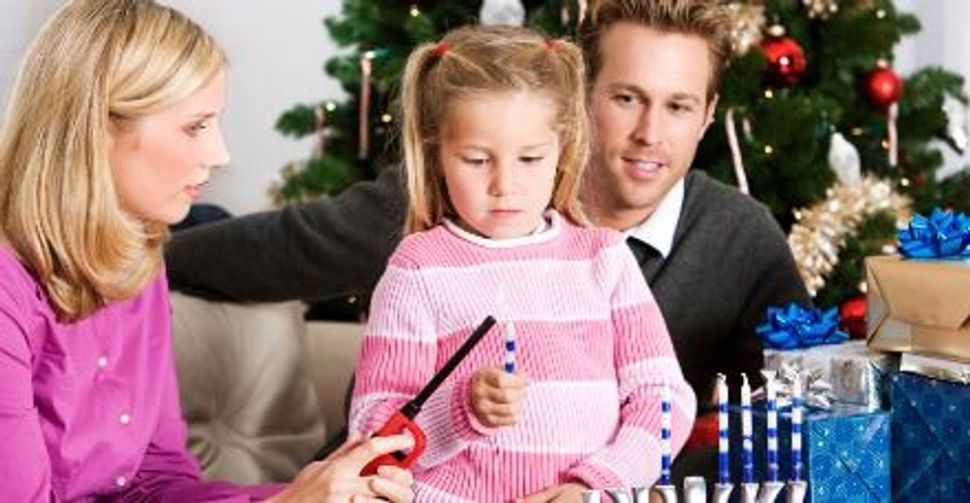 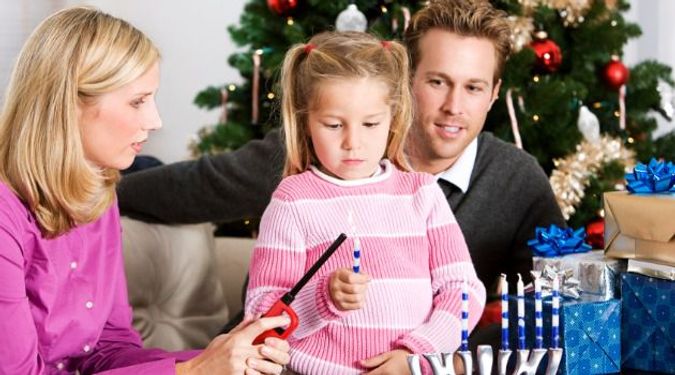 All I Want for Hanukkah: Parents have a tough job teaching children about the holidays, especially as Christmas draws near. Image by istock photo

‘It’s comin’ on Christmas / They’re cuttin’ down trees / They’re putting up reindeer / And singing songs of joy and peace.…” I grew up obsessed with Joni Mitchell’s “Blue” album, lustily singing along with every track, mournfully noting how sad it was that she made her baby cry, during Christmas of all times. So I didn’t mind the lyrics of “River.” The song was not at all like the Christmas carols I was forced to sing in chorus (“For the Lord God Omnipotent Reigneth! Hallelujah! Hallelujah!”), which made me stand, indignant, and wonder if I should remain silent rather than mouth the word “Christ.” It didn’t make much sense to reject one and embrace the other, but such is life in the holiday season, in America.

Of course, at home back then, we had no Christmas, and we still don’t today.

The other night, my 2.5-year-old daughter, Orli, and my partner, Ian, went to a friend’s house; the family has two boys — one about 3, the other about 5 — and the kids were all excited to tell Orli they had sat on Santa’s lap that day, in a Virginia mall. “Santa?” Orli said as she looked to Ian, somewhat uncertainly. And then the parents of the two boys lit candles, something they apparently do, occasionally, for dinner parties. Now this was something Orli understood. “Candles are for Shabbat!” she cried.

When Ian came home we laughed about it, but then we wondered: How do we explain Christmas? She’s young enough that some of the consumerism can be blocked (but with difficulty — already we’ve gotten a dozen catalogs from companies like American Girl and Target and One Step Ahead, promising Christmas treats). But how do we teach her to respect it and yet reject it, or if not reject it, not need it or want it? How do we discuss Hanukkah without making it an alternative to Christmas? For a girl named for light, it shouldn’t be too hard, and yet it stumps me.

I put out a query to a few other families, asking for advice and to see how they handle the three Cs — Christ, Consumerism and Consciousness — during the holidays.

“I hate it, frankly — I hate that they get so acquisitive and that I don’t have the energy to take a stand,” said Elana Matthews, an English professor in Madison, Wis., who worries that her children feel deprived during the holiday season. “I mean, we’re pretty actively Jewish… but I think that for my kids, Hanukkah is basically an inadequate Christmas with candles.” Matthews said that her children — Ezra, 5, and Lily, 8 — don’t really query, yet, about Christmas. They just get that it’s a season for gifts. “We go full-on with admiring Christmas trees in stores and people’s houses, and ooh and ahh over lights; we cast it as a sort of art installation that everybody can appreciate because it’s cool to look at,” she said.

Amy Harrison Kotulski and Leslie Harrison Berland, sisters who live in New York and my cousins, also weighed in. “My 6-year-old daughter, who lives her life through the lens of glitter and excess, wants to know why Christmas seems to be the embodiment of both and [why] she can’t be in the middle of it all,” Amy said. “My default [answer] always seems to be that we get eight days of presents! Not the most strategic and thoughtful approach. Oh, and I leave the whole Jesus part out of it. We do discuss that people believe in different things, but mainly because they are stumped as to why their nanny does not have Shabbat dinner. Oy.”

Leslie, on the other hand, tries to “create a rocked-out Hanukkah, so my son never feels there is something lacking.” Jacob, 5, is too young, she explained, to know what Christmas is, but he understands that Jews also have, for example, Passover and Sukkot, festivals that he loves and that not everyone else has. Leslie said she tries to be positive in response to questions about Christmas: “Christmas trees? Yes, it’s part of Christmas. Isn’t it beautiful? You’re so lucky you get your own menorah for Hanukkah.” Being in New York City does make it easier, she said: “Next to any Christmas decoration, there is usually a menorah planted right beside.”

In Orli’s gan, or kindergarten, class, ostensibly there are non-Jewish children, but most are Jews. Debra Perlson-Mishalov, the mother of Jonah, 3, runs a yoga studio in Washington, D.C. “Jonah’s at an age where things are still so regulated, so it is super easy to avoid TV hype, shopping malls and Christmas glitz,” she said. “We do celebrate seasonal changes and talk about shifts in nature, though, and we do have Hanukkah and menorah lightings.… Last year we bought some Hanukkah gifts, but he was so into the candles and making latkes that they were not all given to him. It was a good lesson for us.” She and her husband work on recognizing that, sometimes, an adult’s ideas of want and need are bigger than a child’s.

But some are simpler in their approach. David Baltaxe, a Virginia-based father of three, tells his son that Santa simply doesn’t come to their house. “I think it’s yet another part of life where the response is, ‘We’re Jewish; we don’t do that; that’s what Christians do.’ …We are conscious to not make it a judgment, [but] Christmas is when Christians celebrate the birth of Jesus…. Cue next conversation.”

For now, at least, we can plan our menorah lighting and our gifts, if we do them, and we can talk about lighting up the night, and sing about the Maccabees and play dreidel. And we’ll teach Orli to respect the people around us, and admire their trees, and hope that she feels not lack, but pride.