Not Your Grandma’s Poland Anymore 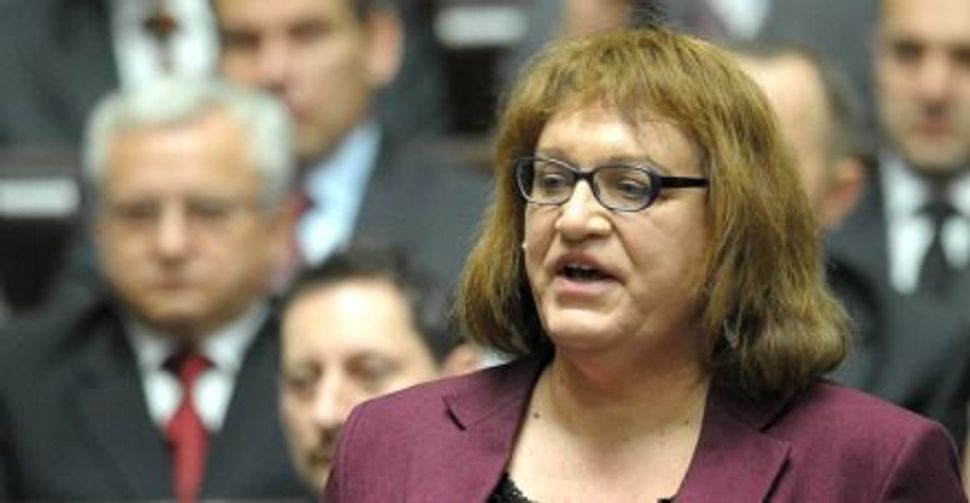 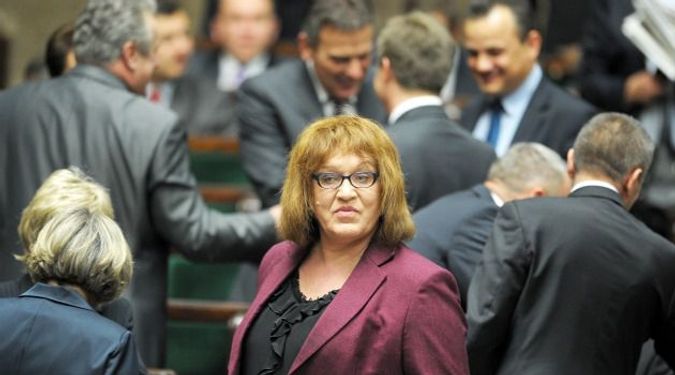 When Poland’s new Sejm, or Parliament, was seated recently, the nationally televised event showed something never before seen in this conservative nation: a transsexual woman and an openly gay man being solemnly sworn in along with other parliamentarians.

The seminal event was a consequence of the emergence of Palikot, a new, explicitly anti-clerical, libertarian-oriented party that garnered 10% of the national vote in Poland’s election last October. Both new parliamentarians were members of the emergent party, which, among other things, seeks to terminate tax exemptions for priests, public funding for religion classes in state schools and state subsidies of churches. Palikot, which won 40 parliamentary seats in the 460-seat body, also advocates same-sex civil unions, a universal low flat tax and the legalization of cannabis use. 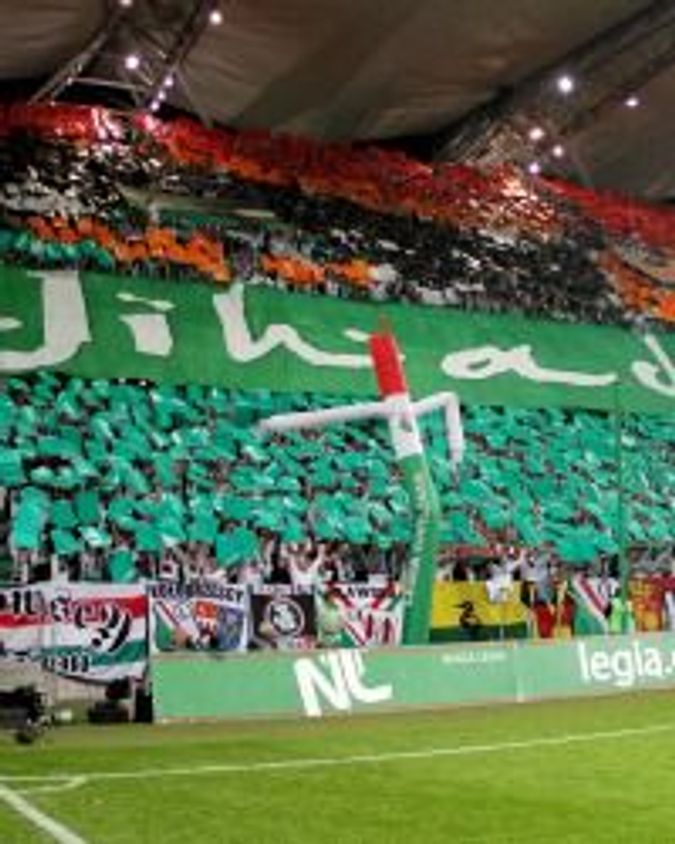 Only So Much Tolerance: Even in the new Poland, there is anti-Semitism. Soccer fans unfurl ?Jihad? banner during match with Israeli squad. Image by geTTY IMAGES

Palikot is not part of the centrist ruling coalition that came out of the October elections. But its breakthrough into parliament is seen as a marker for wider changes sweeping Poland these days. On many fronts, longstanding challenges to the country’s traditional understanding of itself appear to be coming to a head. The historic primacy of Poland’s Roman Catholic Church is being shaken as never before. Controversial issues, once avoided, are now out in the open. Even the country’s stance toward its own history, including its relationship to the Holocaust, is cracking under the pressure of contemporary challenges.

“Poland is a much more mature society after 22 years of democracy, allowing people to talk about issues that weren’t discussed before,” said Barbara Engelking-Boni, director of the Center for Holocaust Research at the Polish Academy of Sciences in Warsaw.

It remains to be seen just what this will mean for Poland’s relationship with its remaining Jewish community of some 15,000 and with Jews worldwide, who recall Poland as both the centuries-long home of Europe’s largest Jewish community and as European Jewry’s Holocaust graveyard. But in an interview with the Forward shortly after the election, Rafal Pankowski, a sociologist and expert on the radical right in Poland said, “What is very positive in Poland is that there is a growing number of people who are willing to challenge anti-Semitism.”

Recent studies lend support to Pankowski’s view. But Konstantin Gebert, an author and a columnist for Gazeta Wyborcza, Poland’s largest daily newspaper, warned that even as social changes have enabled the rise of a party such as Palikot, “the church has become more and more reactionary.” According to Gebert, Palikot’s gains may not be good for the nation’s Jews.

“Public expression of anti-Semitism will increase because anti-Semites see Palikot as part and parcel of the ultimately Jewish-driven offensive against the Catholic Church,” said Gebert. “There is this concept quite popular on the right wing, that there has been for ages a Jewish plot against Poland because Poland is the bastion of Catholicism.”

In 1989, then Israeli Prime Minister Yitzhak Shamir, who was raised in Poland and whose family perished there in the Holocaust, voiced a rude stereotype held by many Ashkenazi Jews of his generation. “Poles,” he said, “suck in anti-Semitism with their mother’s milk.”

But today, despite resistance of the sort Gebert notes, developments are rebuking this view. Among other things, Poland is engaged in a candid examination of its past. New histories call into question the established self-image whereby Poles have always viewed themselves as either heroes or victims during World War II. Now, say some historians, they must also see themselves as murderers. This evolution in self-understanding has been catalyzed by Jan Gross, a Polish-American historian based at Princeton University, whose books “Neighbors” and “Fear” have forced Poles to re-evaluate their recent history.

Among other things, Gross has documented pogroms in the cities of Jadwabne, where Poles murdered 1,600 Jews on July 10, 1941, and in Kielce, where more than 40 Jews were murdered in 1946 —after World War II was over.

Books by Polish historians such as Engelking-Boni have forced painful self-examination. Her history, “The Murder of Jews by Poles in the Polish Countryside,” claims that Poles killed thousands of Jews in rural areas, many of whom were seeking to hide from the Germans.

“Young educators and historians are doing an incredible job of coming to terms with this difficult and dark past,” said Jolanta Ambrosewicz-Jacobs, director of the Center for Holocaust Studies at Jagiellonian University in Krakow. “We have to deconstruct our identity as victims and innocents which was created during Communist times.”

According to Warsaw University sociology professor Antoni Sulek, the publication of these histories has had a positive effect. “It has removed a taboo, and that has made the public atmosphere healthier,” he said.

Sulek is author of “Ordinary Poles Look at Jews,” which was published in August. “The majority of Poles know all the reasons to be proud,” he writes in this analysis, “but not to be ashamed.”

During an interview at the university, Sulek said Polish self-esteem is strongly linked to the established image of Polish behavior during World War II. As a result, many Poles seek to hide Polish behavior toward Jews during the Holocaust.

Engelking-Boni, interviewed in her office at the Center for Holocaust Research, said that the passing of generations has made a re-examination of this image easier. Families now feel more comfortable talking about the Holocaust because the generation of grandparents is disappearing. “The subject is no longer as emotional a family problem. We don’t have to think of grandparents doing anything wrong,” she said.

The passing of generations is also tied to the rise of the Palikot party, which has special appeal for young voters. Polls show that one of three Palikot voters were under 25. And these include some young members of Poland’s remaining small Jewish community.

“Major parties and the Catholic Church never want to discuss changing attitudes on gays, abortion and legalizing marijuana,” said Magda Koralewska, 29, who campaigned for Palikot and is president of Beit Krakow, a 30-member Reform Synagogue in Krakow.

“The Palikot party is confronting all these issues head on. That’s why I decided it’s the party for me,” said Koralewska. “All my Jewish friends voted for the Palikot movement. This is the first time I voted for someone I really wanted.” Koralewska is a graphic computer designer and a convert to Judaism.

Like Koralewska, many young Poles say they feel abandoned by the governing centrist parties. Much of Palikot’s success stems also from anger with the Roman Catholic Church’s rightward tilt during the past 10 years and its powerful political clout.

The Church’s clout has helped sustain a murky relationship between Church and state that Palikot has successfully targeted. For example, catechism lessons are given in public schools, and paid for by the government. There are also charges that taxpayer money subsidizes Church pension funds.

“The nation’s poor are not getting the government support because the money is going to the church,” said Michal Kabacinski, 23, a Palikot member of Parliament, in a telephone interview. Kabacinski, the Sejm’s youngest MP, also said the presence of a crucifix in Parliament was a violation of the constitution, which is neutral on religion.

In keeping with its egalitarian platform, Palikot has also vowed to punish the blatant anti-Semitism that often flares at football matches. In September, a huge banner inscribed with the word “Jihad” was unfurled when an Israeli team from Tel Aviv played the Legia team from Warsaw.

“The display of the Jihad banner was an expression of hatred for Jews,” said Pankowski, the expert on Poland’s radical right and deputy editor of “Never Again,” a website that exposes racism.

According to Pankowski, who teaches at Collegium Civitas, a private college in Warsaw, the word “Jew” is still used as a curse word. An anti-Semitic newspaper, Tylko Polska (Only Poland), is available at newsstands in downtown Warsaw. A recent article in it charged that Goldman-Sachs is “a Jewish machine that profits from manufacturing financial bubbles.”

Newly elected Palikot M.P. Armand Ryfinski said in an interview that Tylko Polska should be banned and the editor punished. “We must clamp down on hate speech,” he said.

The Polish Foreign Ministry, which is waging a campaign to promote tolerance and multiculturalism, has been a proactive force on such issues. To this end, it spearheaded a “Poland for All” day on October 14, encouraging Poles from all segments of society to focus on projects devoted to multiculturalism.

According to Maciej Kozlowski, director of the Middle East and Africa department of the Foreign Ministry, there are competing visions of Poland’s future. Like the current government, many young, well-educated Poles envision a multicultural Poland consistent with the country’s often unacknowledged multicultural past. The country’s nationalists reject this vision for one of a Poland only for ethnic Poles, which has historically bred anti-Semitism.

But the multicultural vision suffers because the 3.2 million Jews that lived in pre-war Poland are virtually gone, and the country no longer has any significant numbers of minorities. Many people know little about the Jews who lived in Poland for 1,000 years.

Jacek Kozlowski, a member of Prime Minister Donald Tusk’s Civic Platform Party, is governor of Masovian Province, a region in northeastern Poland that includes Treblinka, the notorious death camp where 900,000 Jews and Poles were killed. During our interview at a school in the small town of Kosow Lacki, six miles from Treblinka, he stressed the importance of collective memory. Before the war, Kozlowski noted, 40% of Kosow Lacki’s population was Jewish. Today, no Jews remain, he said.

Olga, a clearly anxious 18-year old Warsaw University student who asked that her last name not be used, told me she never knew growing up that the village in which she lived near Lublin was 80% Jewish before World War II.

“My first hint that Jews lived in my village came when I discovered a neglected Jewish cemetery with only two tombstones left. This is something that changed my life. I became aware that other people lived here and now they are gone.”

Kozlowski stressed what the passing of the generational torch to young people such as Olga meant. “My parents tried not to remember. They tried to erase those traumatic memories. Not remembering were those who moved into Jewish houses and who witnessed the deportations and benefited. But if we do not remember, our children will force us to remember by asking questions,” he said. “Who was here? Where did they go?”

Not Your Grandma’s Poland Anymore