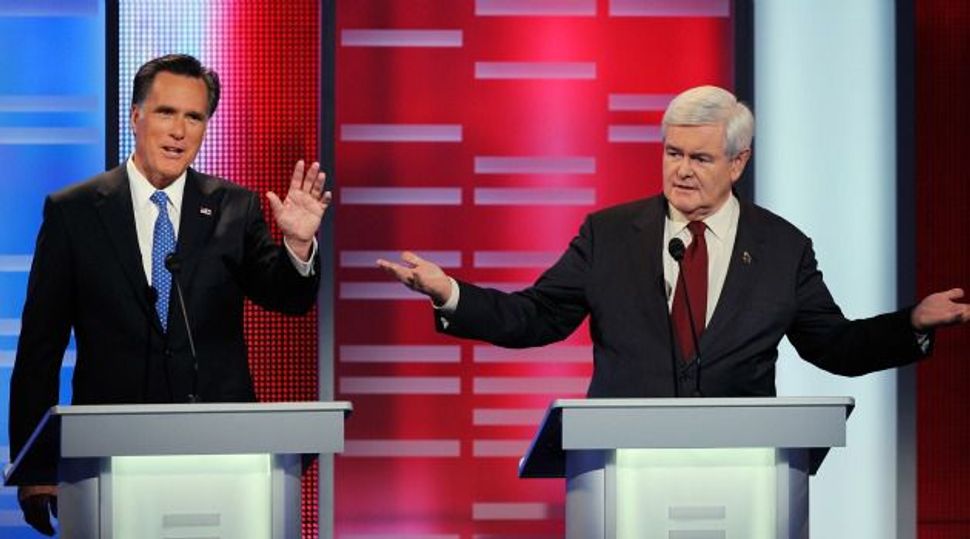 Republican frontrunner Newt Gingrich’s claim that the Palestinians are an “invented” people brought the issue of Israel and the Middle East to center stage in Saturday’s Republican candidates’ debate in Iowa.

For Gingrich’s rivals, especially Mitt Romney, who has seen his once-safe lead slip away, the issue of Israel and Palestine posed somewhat of a challenge.

On the one hand, it was an opportunity to attack the frontrunner, but on the other hand, the issue required a cautious approach, as candidates feared taking a stance that would be in favor of the Palestinians. Romney, therefore, came up with a formula combining both an attack on Gingrich and a pledge to support Israel.

“I happen to agree with most of what [Gingrich] said, except by going out and saying the Palestinians are an invented people,” Romney said, calling Gingrich’s remark “a mistake.” But the former Massachusetts governor stopped short of actually weighing in on the issue of Palestinian peoplehood, referring the matter to Israel, which, Romney seemed to claim, should be the one deciding whether Palestinians are indeed a people.

“We’re going to tell the truth but we’re not going to throw incendiary words into a place which is a boiling pot, when our friends the Israelis will probably say ‘what the hell are you doing?’”

For his part, Gingrich refused to take back his controversial comments. Although his campaign issued a statement earlier Saturday expressing support, albeit a cautious and reserved expression of support, for a two-state solution, once on the stage at the ABC debate in Iowa, Gingrich dug his heels in, saying that his claim was based on historical truth.

“Somebody ought to have the courage to say the truth,” Gingrich said after detailing a list of accusations against the Palestinian Authority, “These people are terrorists. They teach terrorism in their schools…That’s fundamentally time for somebody to have the guts to stand up and say ‘enough lying about the Middle East.’”

This line of argument seemed to play well with the conservative audience in Iowa, which responded with cheers to the comments by Gingrich.

Other candidates did their best to sidestep the issue, with Michele Bachmann telling a familiar tale about her time working on an Israeli kibbutz and Ron Paul using the issue to illustrate why he would support a more isolationist foreign policy.

Rick Santorum, a former Pennsylvania senator, asserted that his approach to Middle East peace would include the claim that the entire West Bank is “part of Israeli land,” an assertion that is at odds with international law and with the stated position of the Government of Israel.

In an interview on Friday with the Jewish Channel, Gingrich predictably sided with Israel in its conflict with the Palestinians, who are seeking a state of their own on land occupied by Israel in a 1967 war.

“The vast majority of American Jews (including this one) and the Israeli Government itself are committed to a two-state solution in which Israelis and Palestinians live side-by-side as neighbors and in peace,” Levin said in a statement. “Gingrich offered no solutions … just a can of gasoline and a match.”

Palestinian leaders said Gingrich had invited more conflict in the Middle East by calling the Palestinians an “invented” people who want to destroy Israel.

“This is the lowest point of thinking anyone can reach,” Erekat, a close advisor to Palestinian Authority President Mahmoud Abbas, told Reuters. Such comments served only to “increase the cycle of violence”, he added.

“What is the cause of violence, war in this region? Denial, denying people their religion, their existence, and now he is denying our existence,” said Erekat, for years a leading figure in peace talks aimed at the creation of a Palestinian state alongside Israel.