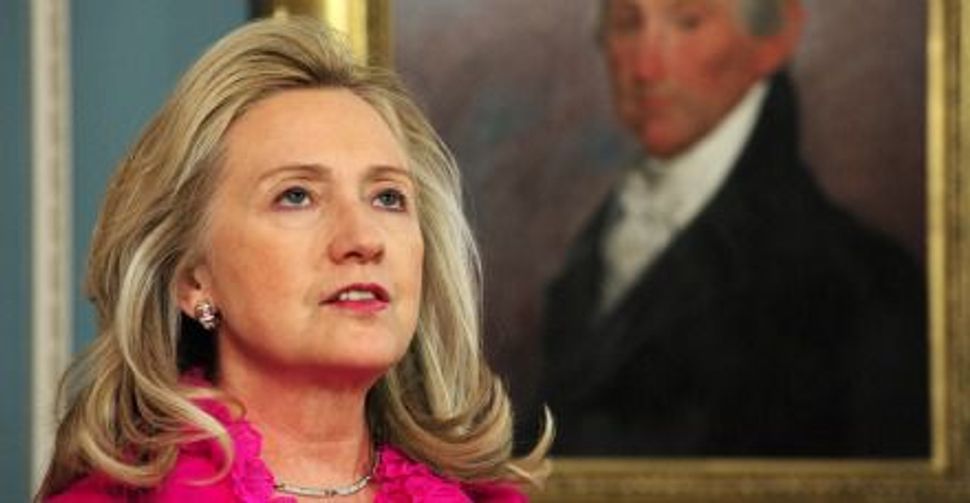 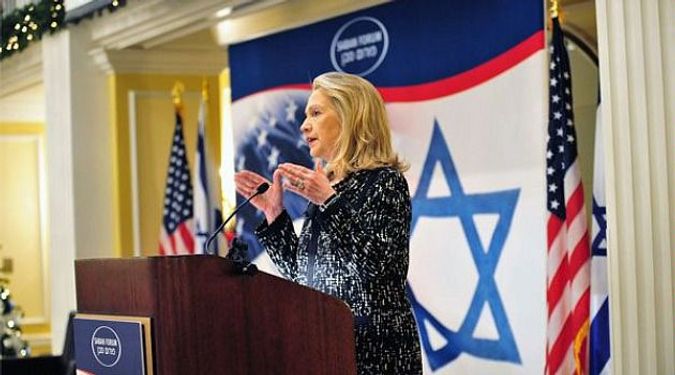 Stating Her Case: Secretary of State Hillary Clinton criticized the role of women in Israel. Republicans pounced, claiming her frank talk reflected an anti-Israel bias at the State Department. Image by State Department

Newt Gingrich, the GOP presidential primary frontrunner, derides the U.S. State Department as “incapable of articulating the cause of freedom.” Former Senator Rick Santorum threatened to take a “meat ax” to it as his first order of business if elected president. And Rep. Michele Bachmann, another GOP presidential hopeful, called on it to more forcefully “expose the atrocious activities of the Iranian regime that are arresting, imprisoning, torturing and murdering innocent Iranian citizens.”

Seeking traction with Jewish voters, these Republican candidates have made the State Department a target of their attacks, portraying it as a bastion of pro-Arab sentiments in the U.S. government.

Current and former State Department officials forcefully reject the candidates’ accusations that the agency harbors an anti-Israel bias. But the charge plays into a decades-old notion that U.S. diplomacy in the Middle East is controlled by “Arabists,” and to the feeling that, historically, the State Department has pushed harder than the White House to resolve the Middle East conflict, even if that means leaning harder on Israel.

Gingrich, a former Speaker of the House of Representatives who currently tops the group of Republican hopefuls in public opinion polls, told a candidates’ forum organized by the Republican Jewish Coalition that America is being “morally disarmed” by the State Department when trying to fight radical Islam. The former speaker also vowed, if elected president, to appoint John Bolton as his Secretary of State, a statement that drew a standing ovation from the crowd of Jewish Republicans. Bolton, who served as ambassador to the United Nations in the George W. Bush administration, is known for his staunch support of Israel and his advocacy of military action against Iran to halt its nuclear development program.

In a conference call with Jewish supporters two days after the December 7 forum, Gingrich fleshed out his idea for reforming the State Department. “Overhauling the State Department will be one of my first goals,” Gingrich said in a conference call organized by the National Council of Young Israel. He explained that in order to reform the diplomatic service, he’d make sure to employ people he trusts and to provide training for other foreign service officers. “You need to be very clear that you’re willing to make changes,” he said.

A key example used by Republicans to demonstrate what they see as an anti-Israel approach by U.S. diplomats is the issue of moving the U.S. embassy in Israel to Jerusalem. Congress passed legislation mandating the move in 1995, but the legislation contained a provision for a presidential waiver of the move on national security grounds for six months at a time.

Every president since has signed the waiver every six months.

Former Republican president George W. Bush promised to move the embassy, only to sign the waiver shortly after taking office. According to Gingrich, it was the “State Department culture” that eroded President Bush’s ability to make the move.

Retired diplomats, meanwhile, including some who have dedicated their careers to dealing with the Israeli–Arab conflict, expressed their anger at the criticism being leveled by Republican candidates.

“It is a manifestation of self-hating Americans,” said Daniel Kurtzer, a former U.S. ambassador to Israel and Egypt and a senior official in the State Department’s Policy Planning Staff in both Republican and Democratic administrations. “To say such things about an entire part of our national security apparatus is an expression of hate.”

Kurtzer, now a professor of Middle East policy studies at the Woodrow Wilson School of Public and International Affairs at Princeton University, added that such criticism undercuts U.S. diplomats working to represent the nation. “This is dangerous stuff,” he said.

The roots of the notion that the State Department shows more sympathy to the Arab world than to Israel date back to the late 1940s, when then-secretary of state George Marshall argued against American recognition of the Jewish state, which was founded in 1948. Scholars have since identified a group of career diplomats specializing in the Middle East as “Arabists,” defined as a small group of foreign service officers, most coming from similar backgrounds, who spoke Arabic, served in Arab nations, and for the most part, took a pro-Arab approach to Middle East diplomacy.

“The idea that the State Department is run by ‘Arabists’ is a relic from the 1950s,” said Philip Wilcox, who formerly headed the U.S. consulate in East Jerusalem. Wilcox, president of the Foundation for Middle East Peace, added that while in the past Middle East policy in the State Department was controlled by diplomats with a similar worldview, the human landscape within the foreign service has changed dramatically since. “The age of ‘Arabists’ is over,” he said.

In later years, the State Department’s professional staff was often viewed by Israeli officials and pro-Israel activists as willing to mount pressure on Israel, especially on the issue of settlements, in order to promote the peace process, which they had seen as their top priority. The White House was perceived as being more in attuned to Israel’s political perspectives.

But the former diplomats dispute this portrayal. “The State Department always leaned forward in trying to make peace,” said Wilcox, “but it always works for the president and always reflects the president’s views.”