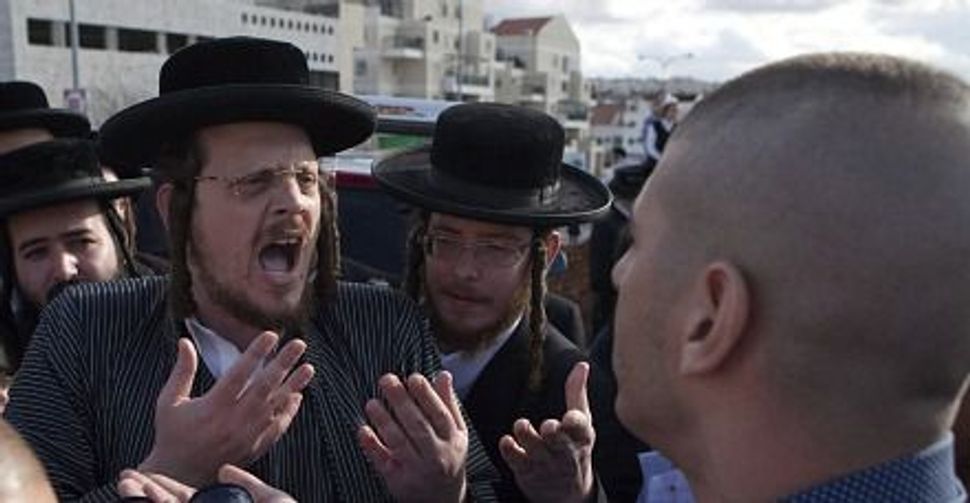 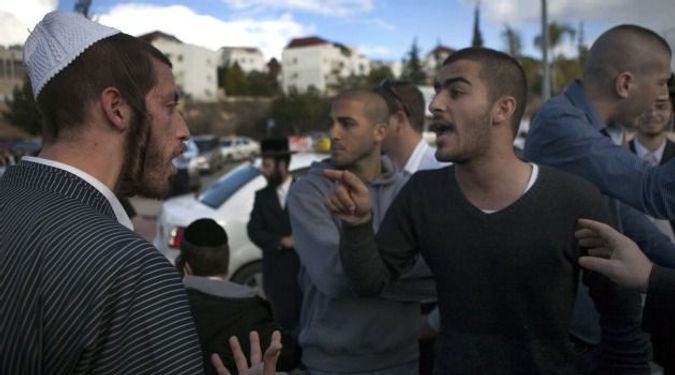 Stand and Fight: Secular Israelis face off with Jewish fundamentalists in the town of Beit Shemesh. Image by getty images

Little Na’ama Margolese is not the first Israeli child to be harassed on her way to school by members of a fundamentalist ultra-Orthodox sect who resent her presence in or around their neighborhood. But the 8-year-old girl is the first to have her plight featured on Israeli television and turned into an international news story. And she is definitely the first to have a determined, organized group of politically and media savvy families behind her, a cohort made up almost entirely of Modern Orthodox immigrants from the United States.

“They messed with the wrong crowd this time,” my friend Sara Eisen, a marketing executive and member of that community, told me. “This time, the bullies came up against Americans.”

Since a television crew captured Na’ama’s fearful walk to school — in recent months, she and her peers have been called “whores,” spat on and had tomatoes thrown at them — the little girl’s story has been dominating national headlines. The attention culminated on December 27 with a Beit Shemesh rally that drew thousands, including members of my own family, and featured speeches by representatives of every major political party.

Less obvious to the casual observer have been the relentless behind-the-scenes efforts of Na’ama’s parents and a handful of friends and neighbors, many with marketing and public relations backgrounds, to prevent Beit Shemesh from becoming a place where only ultra-Orthodox Jews are welcome. The media exposure is the most conspicuous evidence of their work. But it has been backed up by months of letter-writing, phone calls, lobbying in the halls of the Knesset and offices of government ministers, and the filing of police complaints and civil lawsuits.

The English-speaking community in Beit Shemesh, where Eisen, a Baltimore native, has lived for the past 15 years, has been attracting American transplants like her since 1991. That’s when a group of families, looking to achieve an Israeli version of the American dream, began leaving their cramped city apartments and building houses with yards in the sleepy suburb. Situated 11 miles from Jerusalem and in commuting distance from Tel Aviv, Beit Shemesh had been home to secular and traditional immigrants from North Africa since it was founded, back in the 1950s.

Eisen’s street, with its fences and manicured lawns, ends in a cul-de-sac. She likes to joke that she lives on the Modern Orthodox version of Wisteria Lane, the fictional suburban street where the TV show “Desperate Housewives” is set. If the homes weren’t built from classic Jerusalem stone, the neighborhood could easily be mistaken for the American suburbs; even the kids run around with baseball caps and jerseys.

Over the past two decades, many North American Jews mulling a move to Israel were lured to Beit Shemesh by its quality of life, relatively affordable housing stock and the chance to provide their children with a religious education at a fraction of the cost of American day school tuition. These English-speaking immigrants — they now number about 2,500 families — invested time, energy and money into building the local Orot national religious schools for boys and girls.

The new Orot Banot girls’ school is situated on a major road that is the seam between the city’s Modern Orthodox neighborhood and one that is home to members of violent ultra-Orthodox faction known as the “Sikrikim.” Between 100–150 Beit Shemesh families are thought to belong to this fringe sect. All told about 40,000 of the city’s 90,000 residents are ultra-Orthodox, and the vast majority of them, it must be said, are peaceful and not affiliated with the Sikrikim sect.

As for the fundamentalist ultra-Orthodox community, their rallying cry has been that religious Orot girls like Na’ama are immodest. But the real story, Eisen and her fellow activists say, is about real estate. The ultra-Orthodox wanted the building for themselves, according to members of the Modern Orthodox community. In September, on the eve of the new school year, the city’s ultra-Orthodox mayor came out against the opening of Orot Banot, on grounds that the city could not protect its students against the angry extremists and their violent tactics.

A weaker, more pliable group of parents might have walked away, as secular and Modern Orthodox populations have done in communities such as B’nai Brak and other now solidly Haredi enclaves in Israel.

But Beit Shemesh is different. The effort to “save Beit Shemesh” is spearheaded by teacher and community activist Rabbi Dov Lipman, the son of an administrative judge, originally from Silver Spring, Md., who brings his Beltway savvy to the fight. The community is in constant e-mail communication and has set up a Facebook group “We are All Orot Banot,” with more than 1,100 members.

They have had a patrol at the school every day since September. The moment extremists show up to harass students, phone calls go out to the police and reinforcements are brought in to confront them. Volunteers photograph and film demonstrators, hand their materials over to the police, and post the videos on YouTube. Complaints to the authorities and civil suits over the harassment have been filed, as well as action against the municipality’s plans to build new housing for tens of thousands more ultra-Orthodox residents, which would change the city’s demographic make-up permanently. They’ve also received some $20,000 in donations to their legal fund.

One soldier in the fight is Eisen’s brother, Elie Klein, an account executive at the Jerusalem offices of the public relations firm Ruder Finn, who has lent his expertise to the struggle for Beit Shemesh. He was attracted to the city because it was a diverse community where, until recently, secular, religious and ultra-Orthodox Jews lived together.

Klein said that the Modern Orthodox community has no intention of letting Beit Shemesh become an ultra-Orthodox city. “We love this city, and we will fight for the right to live here,” he said. “Not because we want to fight, but because we have been given no other choice.”