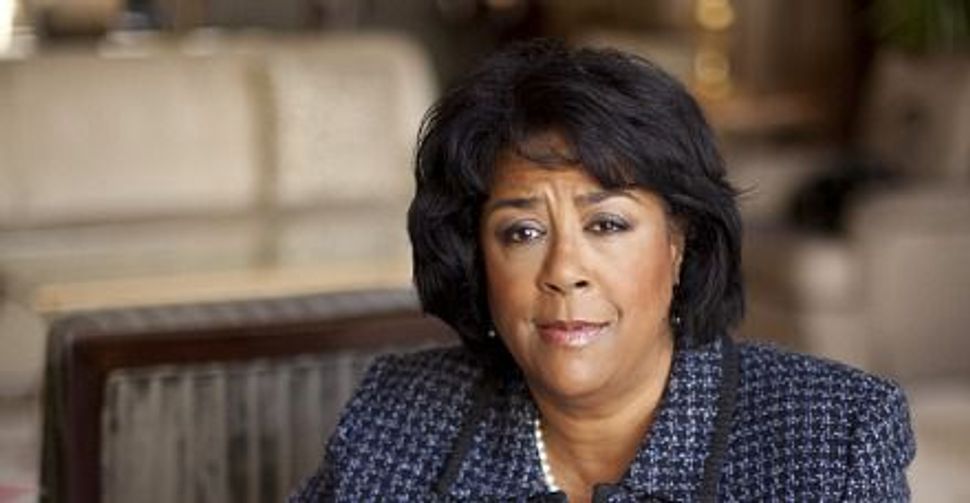 Image by Courtesy of Jan Perry 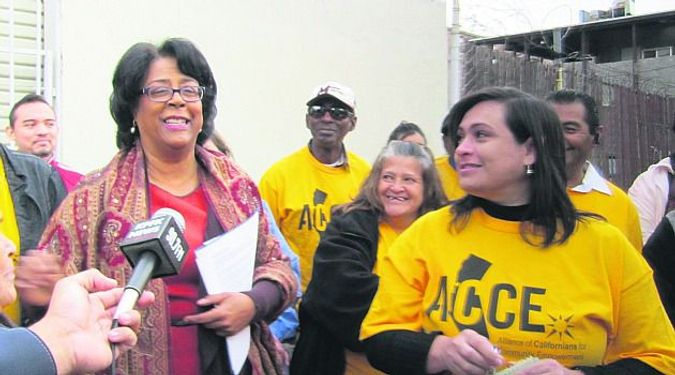 Seeking Success: Councilwoman Jan Perry says she has ?always been a seeker.? That impulse led her to convert to Judaism three decades ago, and fuels her run for mayor of Los Angeles. Image by Courtesy of Jan Perry

“I’ve always been a seeker,” Councilwoman Jan Perry told the Forward during a recent interview over dinner.

The African American politician was responding to a question about her conversion 30 years ago to Judaism. But her comment could also have applied to why she was running for mayor of America’s second-largest city.

Perry was dining not far from her downtown office at the core of the 9th District, which she represents. Wearing a demure black dress and a large-beaded necklace, she perused the menu at Kendall’s Brasserie at the L.A. Music Center, while the supper crowd exited to catch the musical upstairs at the Ahmanson Theatre. As the restaurant hubbub shushed to a whisper, the councilwoman quietly ordered, and slyly requested that her shamelessly calorie-rich choice be off the record. 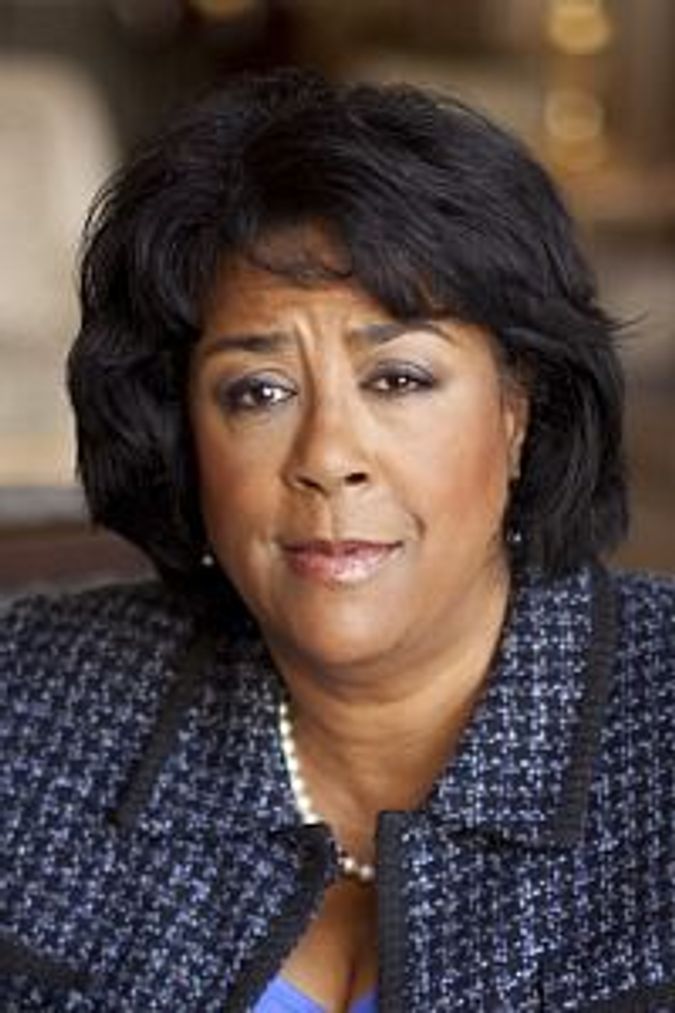 The fact that Perry — who has been endorsed by Rep. Maxine Waters, former police commissioner Bernard Parks and former congresswoman Yvonne Burke, among others — is also African American may seem an unusual twist. But in the transracial, transcultural mix that is today’s Los Angeles, it actually places Perry solidly within the norm of Democratic mayoral hopefuls heading for primary balloting in June.

The four declared candidates, who enjoy an electoral edge over the GOP in this predominantly Democratic city, boast a variety of twists on Jewishness that could ultimately factor into voters’ choices — or not.

Contenders include Perry’s City Council colleague Eric Garcetti, whose lineage is Jewish and Latino; city Controller Wendy Greuel, a non-Jew married to a Jewish filmmaker, with a following among the Hollywood elite; and Deputy Mayor Austin Beutner, a Michigan-born Jewish investment banker and millionaire philanthropist who counts former Mayor Richard Riordan among his endorsers.

“These candidates all have overlapping constituencies,” said Raphael Sonenshein, chairman of the political science department at California State University, Fullerton, and a close observer of Southern California politics. He reckons Perry has “reasonable prospects” of winning. The fact that she is Jewish, in his opinion, “doesn’t hurt,” especially in a city where Jews are 6% of the population but often contribute 16% to 18% of the vote. But the real question is: Will it help?

Perry’s early years were shaped by the progressive politics of Cleveland’s East Side suburbs, where she grew up amid post-war optimism and the rise of a new black middle class. Her father was an attorney who worked for Carl Stokes, the nation’s first black mayor of a major city. Her mother, with a master’s degree in medical social work, helped lead the local push for fair housing laws. Getting out the vote on a local level, and getting behind the 1960s civil rights movement on the national level, were family activities.

When Perry arrived in L.A. in 1974 and enrolled at the University of Southern California’s journalism school, it was the post-Vietnam War era of Watergate, feminist ferment and a new dawn in L.A.’s politics. Tom Bradley, the second African American to be elected mayor of a major U.S. city, had been installed the year before by a historic coalition of the city’s African American and Jewish communities, breaking the grip the local white establishment had held on city government. “I admired his hard work, his quiet but persistent style, and the vision he had for the future of the city,” Perry wrote about Bradley on her website biography.

“She moved in a circle of bright young women, many of whom were Jewish,” recalled Rabbi Chaim Seidler-Feller of UCLA Hillel, in a later conversation. Through her studies with Seidler-Feller, Perry adopted Judaism. Looking back on that event, Perry said, “I think it was because I saw it as a way to serve the world.”

She worked first in the office of city Councilman Mike Woo and then became chief of staff for Rita Walters, the African American councilwoman for the Ninth Council District. When Walters left office due to term limits, Perry won the seat in 2001.

In the decade since, Perry has overseen the rebirth of L.A.’s downtown, with its new Arts District and L.A. Live entertainment complex. She continues to support a proposal for a new downtown stadium, in hopes of luring a National Football League franchise. The blighted South Central area of her district now enjoys two new wetlands recreation parks and preservation projects to restore the African American community’s historic Grand Avenue strip. For her efforts to boost the health of the local economy, as well as the health of its residents, she has been assailed as the “Hamburglar” for drawing up what one blogger called “freedom-destroying Socialist legislation to ban fast food joints from her district.”

Perry laughed at the mention of that accusation, poking at her gourmet meal. “Not every insult merits a response,” she said, quoting her favorite TV show, “Boardwalk Empire.” Nonetheless, she talked of two new grocery stores, a coffee shop and a farmer’s market opening in the area that has been described as a “food desert.” They’re the result of her push to expand healthy eating choices and a zoning moratorium on stand-alone fast-food outlets.

But she has run into problems on several fronts. A 14-acre plot of unused land in her district, cultivated by urban farmers in the wake of the 1992 riots, was reclaimed in 2006 by the owner — a Jewish developer. Subsequent evictions enforced by Perry not only brought down the calumny of urban farmers everywhere (and locally, with some anti-Semitic overtones), but also an Oscar-nominated 2008 documentary, “The Garden,” in which Perry was cast in a less than heroic role.

Perry also caught flak for her role as City Council president pro tempore, taking over City Hall in the absence of Mayor Villaraigosa and Council President Garcetti, at a time that coincided with the funeral of Michael Jackson. Perry extended police, sanitation and other services to help cover the cost of public mourning for the King of Pop, to the tune of about $4 million. With the city in dire financial straits — a $457 million projected shortfall on the $6.9 billion 2011-2012 operating budget — Perry scrambled to solicit private contributions to offset the costs.

Divorced after 16 years of marriage and with a daughter in college, Perry is shy about her private life, which could be tough under the scrutiny of a campaign. She did disclose a taste for ballroom dancing and that she makes her home downtown, close by her office.

“She’s warm, genuine, the opposite of pretentious,” effuses Rabbi Moshe Greenwald, who presides over Perry’s neighborhood synagogue, a loft known as The Downtown Shul, where Perry has celebrated the major holidays. Greenwald said he thought that Perry’s Judaism “plays a role in her sense of helping people.”

“I try to be a good listener,” Perry said, betraying some impatience with the political process. She recently resigned her pro tempore position, publicly declaring her “disgust” with the council’s backroom wheeling and dealing. “It’s no longer enough to do a good job, you have to fight,” she said. In the battle for the top spot in L.A. City Hall, Perry’s fight has just begun.