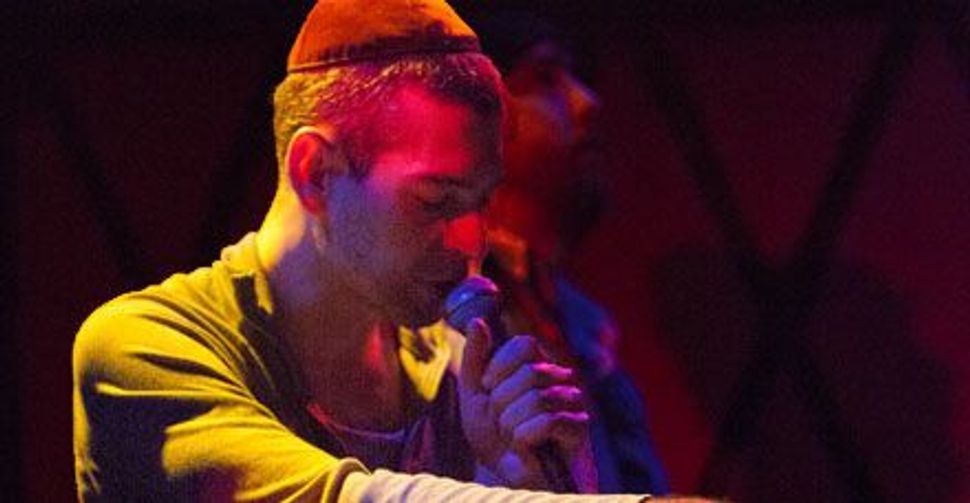 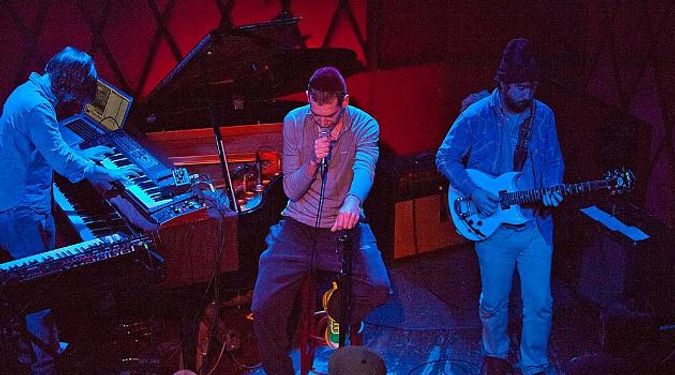 New Path: Matisyahu had fans pleading for his hits at a recent New York gig. But the reggae star is moving in a different direction after shaving his beard and giving up on the Hasidic lifestyle. Image by Derek McCabe

No one noticed Matisyahu when he climbed onstage at a downtown Manhattan concert venue in early January, drinking a cup of tea under dark red lights.

It wasn’t until the onetime Hasidic reggae superstar took off his fleece cap, revealing a velvet yarmulke, that fans connected the gaunt, stubble-faced man with the yeshiva boy who became an instant sensation in 2005, when he beat boxed on “Jimmy Kimmel Live!” wearing a Lubavitch fedora and an untamed beard.

“I didn’t even recognize him at first,” said Keith Dumont, 22, after the Rockwood Music Hall show. It wasn’t just the beard that was missing. The set Matisyahu and his band played at the late-night show didn’t sound much like reggae. And though the crowd begged, he didn’t favor them with one of his hits, or even an encore. 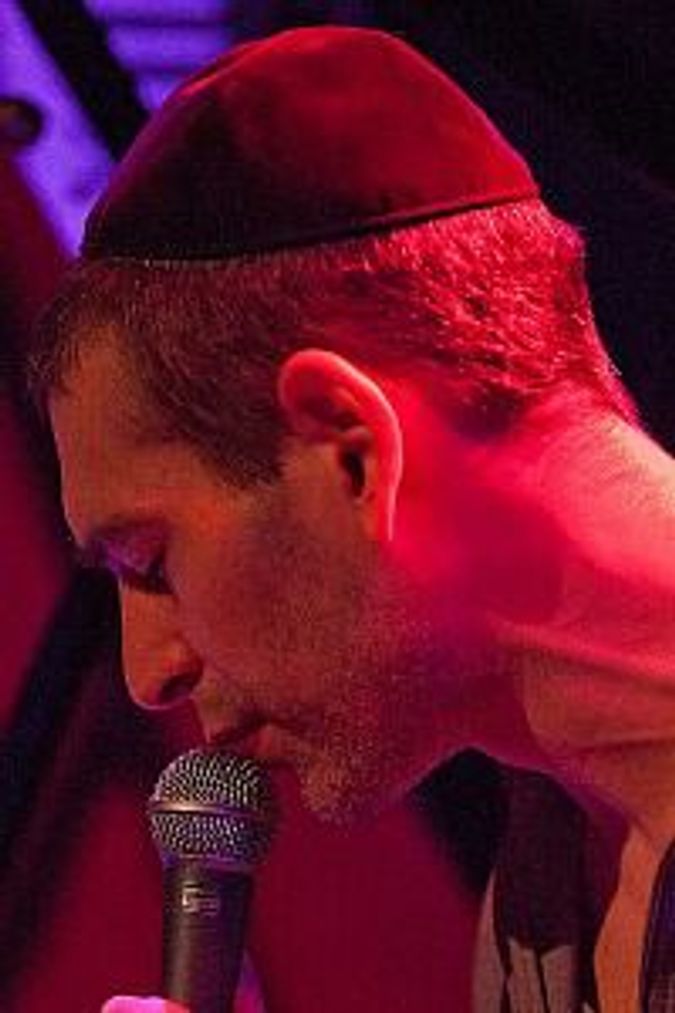 Matisyahu is still a superstar. He holds two spots on Billboard’s latest top-10 reggae album sales chart — the entire Marley clan only has three spots among them — and plays hip venues around the country

But the world of the 32-year-old Jewish reggae artist is in flux. In 2010, the major label Sony dropped his act. He recently moved to Los Angeles from a Hasidic enclave in Brooklyn and is now pursuing acting jobs. And in mid-December, Matisyahu shaved his beard, abandoning the visual hook that had helped separate him from the mass of white reggae wannabes.

For his friends and fans, these personal decisions carry heavy spiritual implications. In shaving and moving away from the Hasidic Jewish neighborhood of Crown Heights, Matisyahu appears to be signaling a shift from the ultra-Orthodox Hasidic Judaism that brought him his artistic success. Matisyahu declined to speak to the Forward for this story. But while some fans say his struggles make him more relatable, others worry about the most prominent ultra-Orthodox ba’al teshuvah, or nonobservant Jew who embraces Orthodoxy, losing his way.

Matisyahu’s first Tweet on December 13 was a nod to his masseuse. His second, issued eight hours later, included a phrase from one of his own songs — “When the tide comes in I lose my disguise” — and two tinted photos of himself, newly beardless.

In the images, Matisyahu looked small and tired, even sick. Black sacks hung under his eyes. The beard was gone, and the shorn artist was unrecognizable. His plain white shirt, buttoned at the neck, looked like the burial shrouds some Jews wear on Yom Kippur.

Days later, during a concert in Brooklyn, Matisyahu apparently lost his temper, breaking a camera wielded by a photographer for Paper Magazine. The photographer, Rebecca Smeyne, writing on Paper’s website, said that she had taken a dozen shots of Matisyahu onstage. “[T]he next thing I knew, Matisyahu’s foot was on my face and I fell to the ground,” Smeyne reported. Matisyahu went on to “deliberately” damage the camera, according to Smeyne, and a representative of the artist paid damages on the spot.

Matisyahu later apologized on Twitter, saying that he had found the flash on her camera distracting.

Matisyahu’s history is, by now, familiar. A onetime Phish fan named Matthew Miller, he grew up in a non-Orthodox home before growing interested in the ultra-Orthodoxy of Chabad. Matisyahu turned into an observant Lubavitch Hasid, studying at a Crown Heights yeshiva. In an interview with Rolling Stone, recorded shortly after he cut his beard, Matisyahu said that he stopped shaving and started wearing tzitzis just days after putting on a yarmulke for the first time.

“When I was 17 I listened to reggae music,” Matisyahu told WNYC’s Kurt Andersen in another interview recorded shortly after he shaved. “I loved Bob Marley. I started growing dreadlocks. It’s always been my way, that the outside matches what’s going on with me inside.”

Matisyahu’s Jewish-themed reggae, delivered in a faux Jamaican patois, hit big with his 2005 disc “Live at Stubb’s,” the first of two RIAA-certified gold albums. Sony put Matisyahu on its premier label and brought in industry heavyweight Jeff Ayeroff to consult on the artist’s image. Ayeroff, who had worked with Janet Jackson and the Smashing Pumpkins, among others, was tasked with packaging Matisyahu for broad consumption.

“I didn’t do anything to him,” Ayeroff said in a telephone interview with the Forward. “I think I kind of polished a very nice diamond.”

Ayeroff didn’t see Matisyahu’s traditional clothing as a problem. “I felt in the beginning that the look might have been a hook, it might have been a story you could tell,” Ayeroff said. “You don’t want to say, here’s a guy, [Matt] Miller, who’s a really good reggae, beat box guy. It’s different than saying there’s this Hasidic Jew, long beard, big hat, who is like an unbelievable reggae star. People go, ‘Really?’”

Ayeroff recruited director Marc Webb, now working on a new Spider-Man movie, to shoot a video for Matisyahu’s song “Youth.” Filmed in part in the now closed Manhattan punk mecca CBGB, Matisyahu wears his Hasidic clothes with attitude. The HBO show “Deadwood,” about life in a Wild West boomtown, was on the air at the time, and Ayeroff thought the image of a guy in a wide-brimmed hat could bring up cowboy associations.

“If you look at the long coat and the big hat and the beard, he would have been in a mining town,” Ayeroff said. “When he prowled that stage, he wasn’t doing ‘Fiddler on the Roof,’ let’s put it that way. He was doing something different in that garb.”

But some critics saw in Matisyahu’s exotic clothing a convenient shield. “Matisyahu’s black hat also helps obscure something that might otherwise be more obvious: his race,” Kelefa Sanneh wrote in a scathing New York Times review. “He is a student of the Chabad-Lubavitch philosophy, but he is also a white reggae singer with an all-white band, playing… to an almost all-white crowd. Yet, he has mainly avoided thorny questions about cultural appropriation.”

Six years on, cultural appropriation is no longer on the table. At the early January show, where the crowd was also nearly all white, all anyone wanted to talk about was Matisyahu’s beard. Or the lack of one.

One person loosely affiliated with Matisyahu’s circle said that people around the artist were shocked when he shaved. But longtime collaborator Aaron Dugan, a guitarist who toured with him until 2010 and appeared with him again January 4 to play music written days earlier, said he wasn’t surprised the beard was gone.

“I knew it would go at some point,” Dugan said moments after the show. “He’s a guy who does extreme things.”

Approached by the Forward outside Rockwood Music Hall, Dumont and his friends said that they had been talking about the beard on the way to the show. “It’s more in their struggle that we connect to great people than in their success,” said Yakov Block, 25. Block had never been to a Matisyahu concert, and upon reflection he said that he had come that evening because the artist had shaved his beard.

Block and Dumont and their friends are young, observant Jews with an alternative bent. Some said they were ba’al teshuvah. Block, who grew up religious, claimed a hybrid identity, saying he was “also Lubavitch.” Standing by the stage door after the show, hoping to get backstage to say hello to Matisyahu, some in the group said they saw in Matisyahu’s change a reflection of their own religious questioning.

“We all know if you’re trying to get better, you fall a little,” said Yonatan Sklar, who said he was a ba’al teshuvah and studied at a yeshiva in Long Island.

But Matisyahu is perhaps the most visible contemporary ba’al teshuvah, and his religious journey has been watched closely. His move away from Chabad in 2007 incited consternation in some religious quarters, as has his decision to shave.

Boxer DmitrIy Salita, a friend of Matisyahu’s and another prominent ba’al teshuvah, said he hoped that Matisyahu’s wavering wouldn’t give other ba’alei l teshuvah an excuse to waver. “Sometimes kids can look at it and see him as a role model and may get discouraged,” Salita said. “But people need to understand, Matisyahu is not a rebbe, he’s not a rabbi, he’s not a religious figure; he’s just a Jew like you and me and many other people, and he’s going through struggles.”

Those struggles may not be only spiritual.

Matisyahu’s life has taken radical turns over the past few years. When Sony dropped him, it left him without major label support. In the meantime, he has launched an acting career. He appears as an exorcist rabbi in “The Possession,” a horror film slated for release in August. The film is based on the story of a box sold on eBay in 2004, purportedly haunted by a dybbuk, a demon from Jewish mythology.

The pop singer was in talks over the summer to star in a “Flight of the Conchords”-style half-hour comedy series about life on tour as a Hasidic pop star. Jonathan Kesselman, writer and director of the 2003 satire “The Hebrew Hammer,” was involved in the project, which fell through. A spokeswoman for Matisyahu said that the musician was working on another television pitch, though she would not provide details.

This move toward film has coincided with Matisyahu leaving the Lubavitch enclave of Crown Heights, where he has lived since his decision to become an Orthodox Jew, for Los Angeles. Matisyahu, who has a wife and two children, had previously told reporters that he stayed in Crown Heights because of his wife’s ties to the community there.

The Matisyahu spokeswoman said that he was working on an album, though it was not clear on which label it would be released. Matisyahu wrote on his Twitter feed January 8 that the album would be titled “Spark Seeker.”

Some hold out hope that Matisyahu’s beard will return. “He didn’t say it’s gone. I feel like there’s a 2013 tour called ‘The Beard Is Back,’” said Chaim Marcus, a longtime friend of Matisyahu’s and a Lubavitcher who produced the hit music video “Ya’alili,”, which featured Matisyahu’s young son in peyes, or sidelocks, and a Batman sweatshirt.

But Matisyahu’s own words, published on his website amid the gossip-blog furor over his shave, leave little hope for the beard.