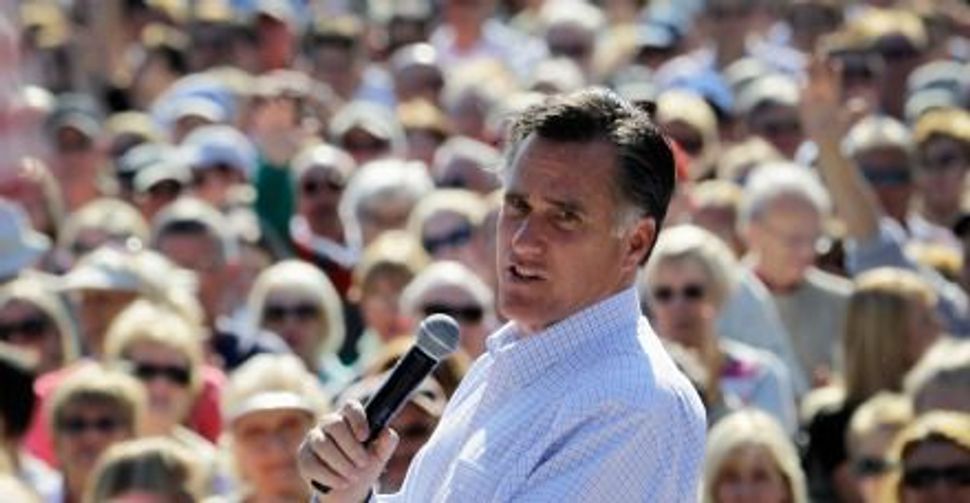 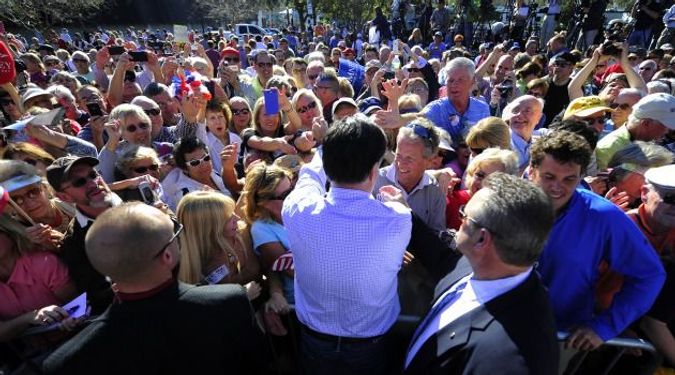 Florida Finale: Basking in the glow of a big lead in polls, Mitt Romney drew enthusiastic crowds as the Florida Republican primary wrapped up. Image by getty images

Republican voters prepared to go to the polls Tuesday in the Florida primary after a campaign in which the candidates paid scant attention to the Sunshine State’s 500,000-strong Jewish community.

The two leading candidates, Mitt Romney and Newt Gingrich spent much of their time in central and northern Florida and all but ignored the heavily Jewish communities in south Florida’s Dade and Broward counties.

Rick Santorum, who was far behind in third place in polls, was scheduled to speak on Monday at a Boca Raton synagogue but had to cancel his appearance after his daughter fell ill. Ron Paul chose to skip campaigning in Florida altogether.

While Florida and its large Jewish population are expected to serve as the ultimate battleground in the presidential race, not much is in play during the GOP primary. Most of the state’s Jews are Democrats and cannot vote in the GOP primary. Those who are Republican lean strongly toward Romney, analysts say.

Polls conducted before the Tuesday primary, the first to take place in a large state, predict an easy win for Romney, who came back from his defeat to Gingrich in South Carolina to rebuild a double-digit lead in Florida.

Nearly 2 million Florida Republicans are expected to vote in the primary, with the winner grabbing all of the state’s 50 delegates.

Gingrich’s Florida campaign leaned heavily on a $5 million donation he received from Miriam Adelson, wife of gaming Jewish billionaire Sheldon Adelson, but was still outspent by at least 3-to-1 by Romney.

The Jewish community did get a shout out from Gingrich, who, in his last day of campaigning on Monday, repeated several times the claim that Romney is out to limit religious freedom.

As proof, Gingrich cited two decisions Romney had made while governor of Massachusetts. One had to do with Catholic hospitals that Gingrich said were forced to supply birth control medications under Medicaid. The other with Romney refusing to fund kosher meals for Jewish seniors.

“Governor Romney cut off kosher meals for Jewish senior citizens on Medicaid for $5 a day,’’ Gingrich said in a campaign event in Tampa. He repeated this claim on several other campaign stops in Florida. The Romney campaign, in response, said that funding for kosher food was cut due to the state’s budget deficit and that it was restored shortly afterward. A spokesperson for Romney characterized Gingrich’s attacks as “desperate attempt to try and save his floundering campaign.”

Gingrich came into Florida with the wind at his back after he thumped Romney in the South Carolina primary on January 21. Romney turned things around with a withering storm of TV ads and an impressive political organization.

Both leading candidates strongly defended Israel when questioned about the Middle East peace process at one debate. They also vowed to take strong measures to counter the nuclear threat posed by Iran.