Conference Fails To Live Up to Name 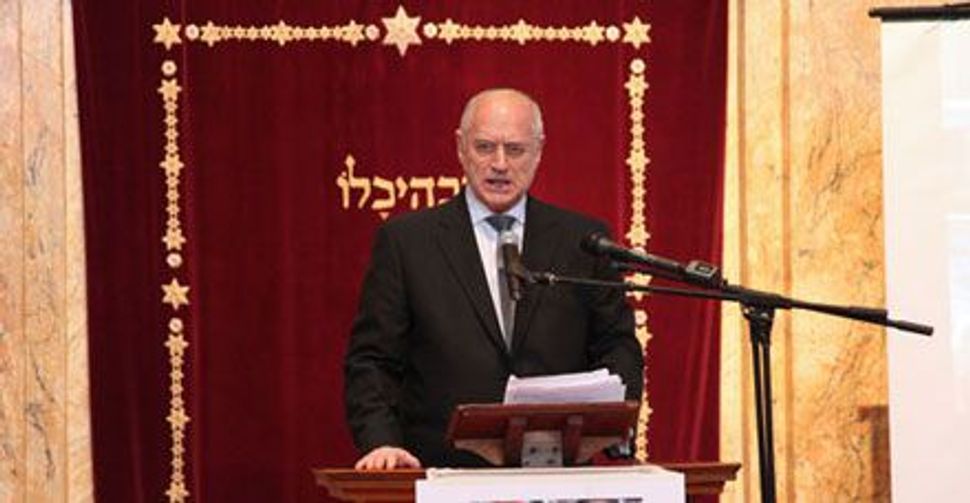 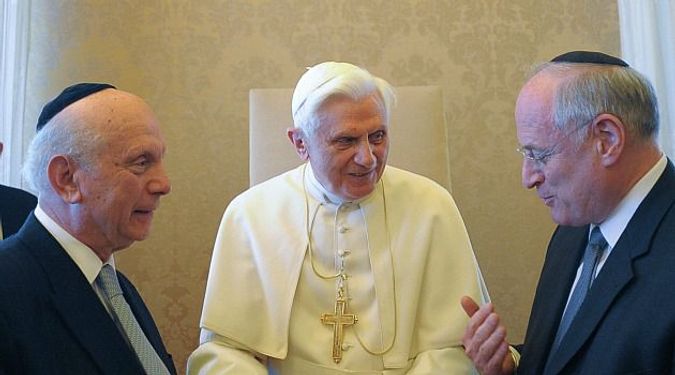 Popes and Presidents: Malcolm Hoenlein, right, and Rabbi Arthur Schneier of Park East Synagogue meet with Pope Benedict XVI. The Conference of Presidents of Major Jewish Organizations is supposed to be an umbrella group of the biggest communal organizations. But a closer look reveals that?s no longer really the case. Image by getty images

When Jordan’s King Abdullah sought to reach out to American Jews recently, he invited a delegation of the Conference of Presidents of Major American Jewish Organizations to his Royal Palace in Amman for a lengthy discussion about the Israeli-Palestinian peace process, Syria, Iran and all manner of weighty topics.

The Presidents Conference secured the high-level meeting at such a sensitive time because it has been the channel of choice for many national and world leaders wishing to communicate with American Jews. The Presidents Conference, a membership umbrella agency headquartered in New York, presents itself as representing all the heavy hitters in the organized communal world.

But it doesn’t. A Forward examination of its member organizations found that some of these “major” groups have less than a handful of employees, while others can show little financial activity and a few are all but defunct.

“It is the conference of major and minor Jewish organizations,” said Abraham Foxman, national director of the Anti-Defamation League, one of the larger groups represented in the Presidents Conference. “In fact,” he added, “it’s got more minor groups than major.”

The Presidents Conference was founded in 1956 at the request of the Eisenhower administration, which sought a single point of contact for the Jewish community. It has since grown to include 51 Jewish groups and is viewed by both Israeli leadership and America’s administration as the official voice of the Jewish community on policy issues, mainly those pertaining to Israel. In that capacity, the Presidents Conference meets regularly with kings, popes and presidents.

But as the umbrella organization has grown in size, its membership base has not always kept up with developments within the Jewish community. Many of the groups that now dominate the broader policy discourse are not in the Presidents Conference, while others that are no longer significant players are still in.

The Israel Project, an up-and-coming advocacy organization, is one of those left outside. The group was established 10 years ago, and in 2010 it employed 30 staffers and brought in nearly $7 million. Jennifer Laszlo Mizrahi, its founder and president, has been invited to the White House and to the halls of power in Jerusalem, and is a frequent voice for Israel on Capitol Hill. The only place that her group has not been able to get a seat is around the table of the Presidents Conference.

“It’s disappointing,” she said in a recent interview, adding that the group began its application process after completing the five-year waiting period required of every new organization before being allowed to apply. But the only response TIP has heard is that its application is pending.

“There is a reason we want to be a member, and the reason is that I believe in cooperation and that there shouldn’t be duplicity in the Jewish world,” Mizrahi said. Not being a member means TIP is not invited to meetings the Presidents Conference organizes with visiting Israeli dignitaries or with officials of the United States. It also does not participate in the annual mission to Israel, such as the one that took place in February.

A look at the membership list of the Presidents Conference shows that organizations much smaller and less active than TIP are welcome guests at these events.

But members also include some less likely players. Tiny groups with small budgets and few staff members, such as American Friends of Likud, Ameinu, the Jewish Labor Committee, The American Gathering of Jewish Holocaust Survivors and MERCAZ USA, are full members of the Presidents Conference. Organizations such as the B’nai Zion Foundation and AMIT, which have little to do with policy issues, also are members, as are many groups that are subsidiaries of larger organizations, such as the women’s affiliates of the Reform and Conservative movements. The American Jewish Congress, which has barely been active in the past year, is still a full member, as well.

And while small organizations enjoy the status of being a “major” group, some obvious players are not on the list. Chabad-Lubavitch, with a network of hundreds of synagogues across the country, is absent, as is Agudath Israel of America, a leading ultra-Orthodox movement. These groups chose not to join because of concerns that accepting a majority opinion on certain issues could contradict their religious beliefs. American Jewish World Service, an extremely active and high-profile group, is not in the Presidents Conference, nor are the groups representing Jewish Democratic and Republican interests.

“It is imperfect because the people and groups representing American Jewry continue to evolve, but the Conference does a pretty good job in reflecting the community’s views,” said Alan Solow, former chairman of the Presidents Conference.

According to tax filings, the organization had revenue of $603,000 in 2010, all from dues paid by member organizations, and a deficit that year of $240,000. In addition, the group is supported by an affiliated fund that raised $1.7 million in 2010 from donors. Altogether there are eight employees.

Former key members of the Presidents Conference pointed to several requirements for being admitted to the umbrella organization: The applying group must be at least 5 years old; it must demonstrate a source of funding, and it has to be a membership organization. It is clear, however, that not all current members meet these requirements. The Development Corporation for Israel/State of Israel Bonds, for example, is an organization that sells securities issued by the government of Israel and is not a membership-based group. Still, it is part of the Presidents Conference.

Several years ago, a small dovish organization, Meretz USA, applied for membership and was turned down because it could not convince the Presidents Conference that its membership and financial resources were sufficient. Political considerations are not supposed to play a role in deciding on membership, although Americans for Peace Now had to struggle in 1993 to get accepted.

Despite these anomalies, most Jewish groups believe that the Presidents Conference provides a fair picture of the American Jewish organizational world, thanks to an unofficial system of checks and balances and the fact that it reflects the rightward slant of Jewish organizational leaders as opposed to the more moderate views in the general Jewish public. “It is a reflection of the organized Jewish community, which is overwhelmingly to the right of center,” Foxman said.

“By and large, it is representative” of the organizational world, added Rabbi Eric Yoffie, outgoing president of the Union for Reform Judaism. “I don’t think there is a grave injustice in the sense of who gets to be represented.”

Yoffie is far from being a defender of the Presidents Conference. As a longtime leader of its largest group, Yoffie has fought to reform the decision-making process so that large groups like his own get more of a say than marginal ones. “Why should a group with 10,000 members have the same weight as an organization with a million members?” he asked. Yoffie’s suggestion to form an executive committee in charge of daily policy decisions was, however, turned down.

Members of the Presidents Conference usually convene for meetings with top officials, either American or Israeli. “It is very rare that something will be brought to a vote,” said a member who asked not to be named because of his organization’s policy of not talking to the press about the Presidents Conference. “Usually the chairman will issue a statement with Malcolm [Hoenlein] that reflects the sense of the organization.”

In recent years, the Presidents Conference has increasingly turned to the use of task forces on specific issues, such as Iran, delegitimization of Israel and the Palestinian statehood bid, as a means of focusing on programs and issues without making decisions that require the full forum of members.

But for those inside, the conference is still seen as a needed communal tool. “Many times we need to sit together and reach a consensus and present one voice,” Yoffie said. “And the authorities appreciate that.”

Conference Fails To Live Up to Name