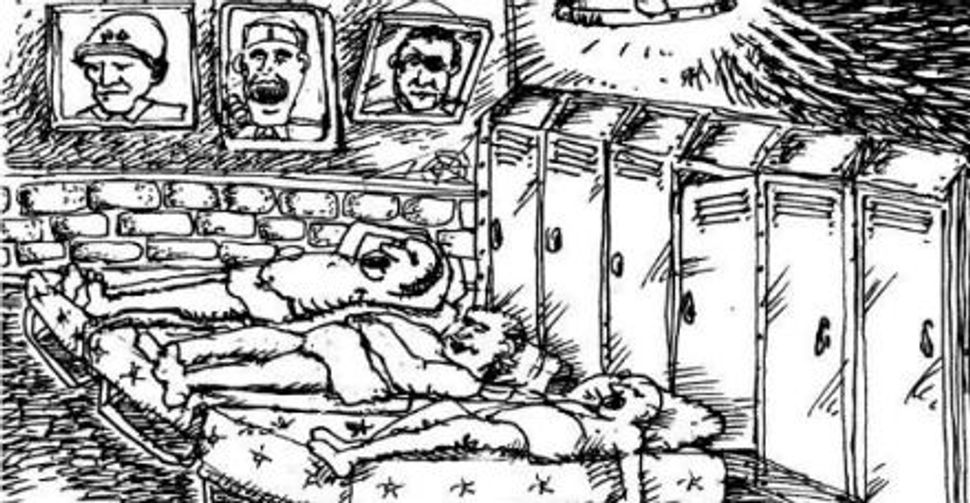 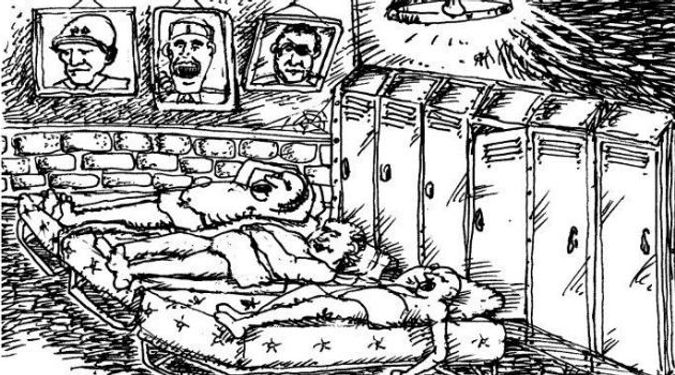 Ya Gotta Go There: Unlike other schvitzes, the Cleveland one is all-male. Image by Ralph Solonitz

At first, when your father-in-law tells you he is taking you to the schvitz, you are not quite sure you heard him correctly.

“The schvitz!” he repeats.

“A schvitz is a schvitz!” he says, as if the meaning of the word were contained, matryoshka doll-like, inside the word itself. “Don’t worry — you’ll love it.”

Worry? Who said anything about being worried?

Read all the Forward’s special coverage of Cleveland, including Cleveland Rocks — Not Really, Harvey Pekar’s Ode to Cleveland, and For Cleveland Jews, Schvitz Is Must

“Do I need to bring anything?” you ask.

At this, your father-in-law laughs, breathily. “No,” he answers. “Not where we’re going.”

You put on your game face. You confidently declare to friends and family, and especially women — who are not allowed to enter the schvitz — that you are “looking forward to experiencing” this mysterious Jewish treasure on Cleveland’s east side. Your wife asks you if something’s the matter.

“Nothing’s the matter,” you say.

“Is your stomach bothering you? Do you have indigestion?” she asks.

“What exactly is a schvitz?” she asks.

You sigh, with great dramatic flair. “A schvitz is a schvitz!” you say.

As the day approaches, you find you are able to rationalize away your anxiety. The Schvitz, Yiddish for “sweat,” is, you learn, a private men’s club, a steam room on 116th Street and Kinsman Road, long a part of the storied history of Jewish Cleveland. You are from New Jersey, and thus have never heard of this venerable institution. But it seems that every Jewish man in northeast Ohio has been there at one time or another, with his father or with his grandfathers, some of whom are likely in poor health. What’s the worst that could happen?

As the appointed day arrives, however, driving to the Schvitz in a rented bus with a group of seemingly calm friends and family, your trepidation returns. You get off the highway at an exit you’d thought best never to take. You are driving on streets lined with old, dilapidated row houses. Pavement glitters with broken bottles. This place has the distinct look of a place that, at one time long, long ago, was truly a place. (And it was, you’re told: a neighborhood thriving before World War II with Jews, Poles, Slovenians and Italians.) Now, it’s the portrait of America’s forgotten city.

The situation does not improve when you arrive. In fact, your first thought is: “We can’t have arrived. We aren’t anywhere.”

Where you are, to be precise, is a foreboding-looking two-story stand-alone brick house, walls crisscrossed with ivy vines, upper windows boarded with plywood. There is no sign. As far as you can tell, there is no street address. You drive through a chain-link gate into a muddy parking area and are greeted by a man with a thick Russian accent and what may or may not be a holstered handgun beneath his jacket.

“Is he a police offer?” you ask your father-in-law, folding your arms over your chest.

“Now’s not the time for questions,” he replies under his breath, as the man leads your party silently across the lot, past a rusty garbage barrel, to the rear entrance.

You swallow hard. You’re a writer. A journalist by training. You like questions! Questions are how you know, in any given situation, not to panic. This, you want to say, is exactly the time for questions. We all should be asking them!

Before you can protest, though, you are whisked inside. Here, things happen in rapid succession. You are taken to a locker room, where you are told undress. You are given a bed sheet to wrap around yourself. You are quickly led into the steam room, where the men you are with take seats on the lower benches and energetically cast aside their sheets. Facing you is a giant oven, with cast-iron doors, that, you are told, heats sandstone rock. The Russian attendant says what sounds like: “Touch the oven, I heat you with cold trouble, da?”

But you know what? You are getting the hang of this place. The steam, as it starts to permeate the room, is wonderful. It fills you to your core, radiates outward through your extremities. It feels so wonderful on your face, you’re suddenly not sure you’ve ever actually felt steam on your face before. You absorb it, greedily. You have somehow managed to entirely forget that you are sitting in East Cleveland and it is winter.

“I’m going up,” you say, pointing to the top bench.

“Okay,” your father-in-law says, a not-quite-smile creeping across his face. “Good idea. Go ahead.”

You stand, slightly perplexed but increasingly emboldened. It’s not so bad in here! By the time you sit yourself down on the top bench, it’s too late. The heat up here, trapped between the stone ceiling and bench, is not heat, exactly. It’s something more than heat. It’s super-heated heat. It’s schveat. Your thighs and buttocks, upon contact with the bench, sear like ahi tuna. It hurts to breathe. Your every instinct is to flee, down, down, down, out of this inferno. Only, the men on the lower level are watching, smiling piteously, and your father-in-law asks, “How’s the temp up there?”

You manage to stay seated for maybe half a minute, then another, sweat flowing through your creases and valleys in rivers, staining your sheet, dripping over your edges.

And then at last the Russian returns. Mercifully he leads the group out of the steam room. You are given the opportunity to immediately plunge into an unheated, rocklike pool of 40-degree water; none in your party avails himself. And so you are led upstairs, where you sit, clad in only your bed sheet, at a long family-style table and are given three choices for your meal: small steak, medium steak or large steak. You order a large — figuring, “When in Rome… — and what comes out a short time later on the center of a substantial dinner plate, after you’ve downed two or three shots of whiskey, is a shocking tree stump of beef, cooked medium rare and piled high with lightly cooked garlic gloves. You eat, tentatively at first. You are quite certain that were you to ask for a dinner salad, you would immediately be escorted to the curb.

And then, no sooner have you finished, when a Russian teenager approaches and offers you an after-dinner massage.

All the other men in your party politely decline this offer. You are inclined to follow their lead, But your father-in-law says, “No massage?”

This, you have to admit, is quite true. You have the distinct sense that your father-in-law just put the word “massage” in quotes, though you’re not sure why he would do this. What could be so quote-massage-unquote about a simple massage? And, anyway (blame the whiskey), you are now feeling nearly brave. The worst is behind you. You came, you saw and you survived. You are now among the select few who have been to the schvitz and can tell the tale. You deserve a nice back massage to top off things, don’t you?

The Russian teenager leads you into a darkened room that has rows of massage cots. One after the other. Like a barracks.

You have had many massages. You believe in their health benefits. You know how they are supposed to proceed. Only this “massage therapist” does not ask if you have any “pre-existing medical conditions.” He does not ask if you have any areas you want him to focus on or trouble spots to avoid. He simply points to the bed. You get on, facedown, suppressing the stubborn, niggling feeling that, you notice, has quite forcefully returned.

Before you can finish, he has you in something like a cross between a bear hug and a half nelson. One moment you are staring at the sheet beneath your face, and the next, inexplicably and without the slightest regard for the limits of your body’s pliability, you are looking up at the ceiling’s furthest recesses.

Later, on the ride home in the rented van — rosy, limber and sated — the men, elders one and all, will bicker over the sound they thought they heard coming out of that massage room.

“It was an oooomph,” one says, holding his stomach for illustration. “After the scream.”

“It couldn’t have been an oooomph,” another says. “The air was going in.”

“Were you also crying?” a third asks helpfully. “It sounded like he broke you.”

You are smiling, though, because at the end of the day, he didn’t. None of them did. Smiling because you’ve never felt better. Never in your entire life.

“Well?” your wife wants to know as you saunter jauntily back through the door at home, children running to greet you like a conquering Crimean War hero. “How was it? What was it like? What did they do to you?”

She accepts this, squeezing your hand lightly. She is relieved, frankly, to find you alive and in one piece.

And so are you.

Josh Rolnick is the author of the short story collection “Pulp and Paper” (University of Iowa Press), winner of the 2011 John Simmons Short Fiction Award, He is also the publisher of Sh’ma: A Journal of Jewish Ideas. He blogs at www.joshrolnick.com.