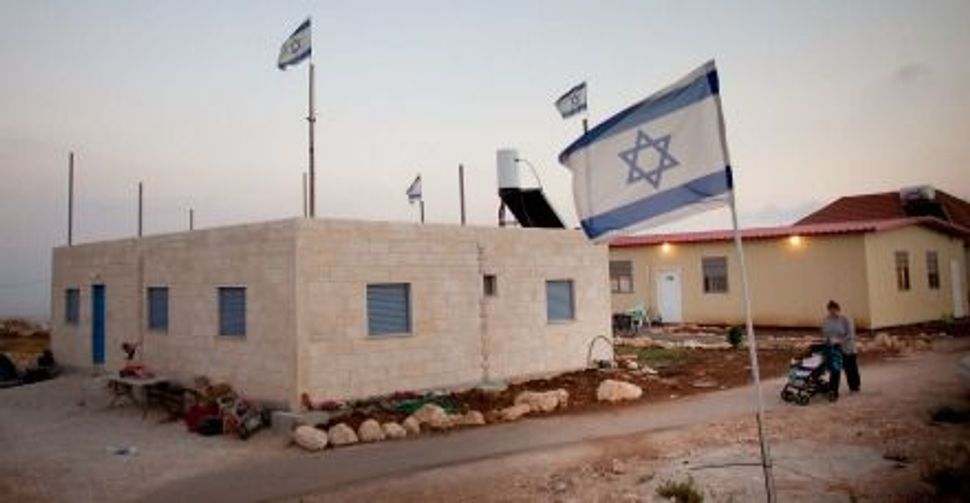 Flying the Flag: Illegal mini-settlements were supposed to be dismantled long ago. Migron?s continued existence reveals flouts the promises made by Israel years ago. Image by getty images

To almost every country in the world, all of Israel’s settlements on the occupied West Bank are officially illegal. Israel rejects this view but does consider one group of settlements illegal under its own laws. Yet, less than a handful of these unauthorized outposts have been evacuated since June 2004, when then-Israeli Prime Minister Ariel Sharon promised President George W. Bush to remove them. Of those that were evacuated, most were repopulated within days.

Now, Prime Minister Benjamin Netanyahu’s cabinet has decided to ignore Sharon’s promise for at least another three years. On March 11, the cabinet reached an agreement with Migron — the oldest of the unauthorized settlements, located near Ramallah — to allow residents to stay put until 2015. In the meantime, an authorized settlement will be built nearby, and that is where they will move in three years.

To Dov Weissglass, a senior aide to Sharon who was deeply involved in the commitments his boss made to Bush, the reason is simple: “My impression is that the present government does not feel it is bound by previous obligations,” he told the Forward. “They simply leave it as it is while all sorts of initiatives to legalize [the illegal outposts] pop up.”

Sharon’s commitments to Bush were based on, but independent from, the Middle East Road Map for Peace, a U.S.-brokered agreement accepted in June 2003 by Israel and the Palestinian Authority. Weissglass said he believed this agreement was now “obsolete.”

Mark Regev, Netanyahu’s spokesman, denied that Israel is failing to act against outposts, citing the Migron arrangement and the government’s plan to evacuate another community, Givat Assaf, this summer. “I don’t accept there is non-evacuation of outposts,” he said. “Illegal construction will be coming down.”

It will not, however, be coming down by March 31, the date by which Israel’s Supreme Court ordered the government to complete Migron’s demolition.

In the last 15 years Israel’s unauthorized outposts have become a bone of contention in the Middle East peace process. The term “outposts” encompasses approximately 100 Jewish communities in the West Bank that were built without government permits or planning approval. Despite this, many receive substantial government support. The international community has said that even if Israel does not evacuate approved settlements until a peace deal is achieved, it should evacuate the outposts immediately.

But outposts have become the issue that slips through the net. In his 2004 letter to Bush, Sharon said, “We are fully aware of the responsibilities facing the State of Israel. These include limitations on the growth of settlements [and] removal of unauthorized outposts.” In an accompanying letter to Secretary of State Condoleezza Rice, Weissglass, his top aide, pledged to submit to the United States “within 30 days … a list of unauthorized outposts with indicative dates of their removal,” followed by “continuous action to remove those outposts in the targeted dates.”

Sharon, Weissglass said, “had a clear intention to keep his word and dismantle the [outposts]. But afterwards we got started with the [2005] disengagement from Gaza, which was very complicated and a heavy load in terms of public relations. So we did not feel it was the right time.” Later, Sharon was felled by a stroke.

Daniel Kurtzer, who was U.S. ambassador to Israel in 2004, was the official to whom Weissglass promised Rice he would submit a list of unauthorized outposts, with dates for removal, within 30 days. But Israel never “produced even the data on which we were supposed to work,” Kurtzer wrote in an article published last year in The American Interest, a bi-monthly journal. “And in any event, Washington (and Jerusalem, presumably) lost its appetite for the whole exercise.”

Today, the United States says its position on Migron in the context of Israel’s commitments remains unchanged. “Regarding outposts, our view reflects the relevant provision of the Road Map, which calls on Israel to ‘immediately dismantle settlement outposts erected since March 2001,’” State Department spokesman Ambrose Sayles told the Forward in a March 14 email.

Regev, the prime minister’s spokesman, countered that the Palestinians had not lived up to their commitments under the Road Map. “I think there’s a problem when you have one side that is not standing by its commitments.” Specifically, he said, the Palestinian side has not done enough to end violence against Israel.

But that assertion has been challenged by senior military commanders who have testified before the Knesset’s Foreign Affairs and Defense Committee. An August 2011 draft report produced by the panel concluded, “There is comprehensive security coordination between Israel and the Palestinians, and we have seen a positive change in the security situation as well as enforcement of law and order.”

Further, while Sharon made his agreement to the Road Map contingent on a number of requirements being fulfilled first by the Palestinians, he made no such condition in his commitment to Bush regarding the outposts.

Indeed, with its new Migron agreement, the Netanyahu government appears to be flouting two of Sharon’s promises to Bush and the Road Map.

One, the agreement delays evacuation of Migron for three-and-a-half years, meaning that settlers will continue to live there, but now with de-facto authorization from the government.

Two, a new settlement nearby is to be built to accommodate the settlers after the evacuation, contradicting the Road Map’s ban on new settlement building and Sharon’s promise to Bush to limit settlement growth.

Of this, Sayles, the State Department spokesman, said, “We do not accept the legitimacy of continued Israeli settlement activity.”

Regev insists that the Israeli government faces no loss of international credibility due to the continued existence of outposts. “I think people in the know know that the current Israeli government has shown more restraint on the issue of settlements than any previous government,” he said.

For some, it is no less important that the government’s deal with the residents of Migron also defies a ruling of Israel’s Supreme Court, which found that the outpost was built on private Palestinian land and required its dismantlement by March 31.

Michael Sfard, an attorney for Peace Now who represents four of the Palestinian landowners on whose land the court found Migron was built, said that his clients’ interests have been marginalized. “They have no voice in the corridors of Israeli power, and they were not even contacted while the government negotiated with the settlers,” he said. “They were not surprised. I was appalled.”

But his most serious accusation is that with its deal with settlers, the government undermines the authority of the Supreme Court. “To some extent I am the Israeli judiciary’s salesman among Palestinians — I convinced them that we have an independent court that rules according to the law and that it must protect their rights,” he said.

“When we won in court they were the first to raise doubts on whether the decision would be implemented and I tried to explain that with all its faults the Israeli legal culture would not allow the government to circumvent a Supreme Court final ruling. I was wrong, my clients were right.”