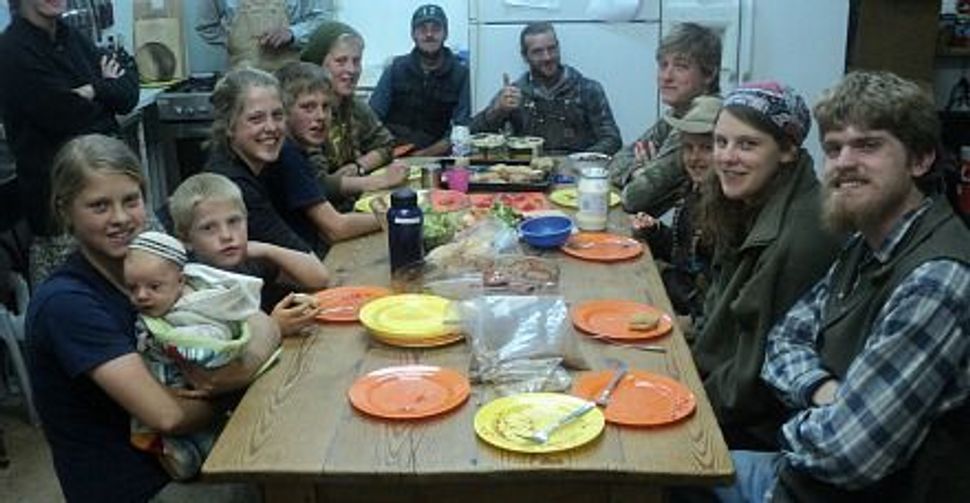 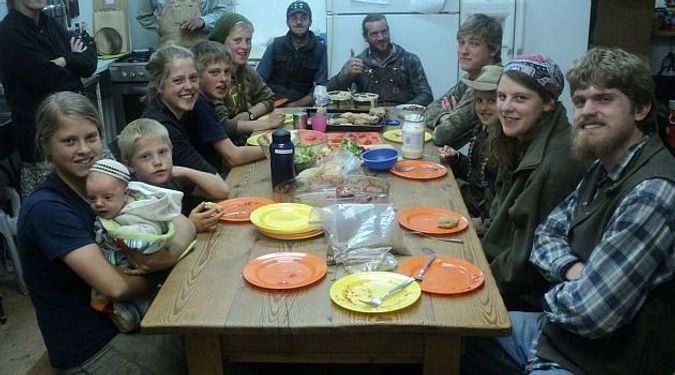 Shared Supper: Evangelical Christians share a meal with Jewish hosts at an Israeli settlement on the West Bank. Image by nathan jeffay

It is a typical, even stereotypical, West Bank settlement scene: bearded young men pruning vines while enthusing about the Chosen People’s God-given right to this region. But in this case it is Jesus, and not Jewish identity, that animates these tillers.

For years, Westerners have flocked to the Israeli-occupied West Bank to help Palestinians with their olive harvest, as part of left-wing activist groups like the International Solidarity Movement. Among other things, the activists seek to resist efforts by settlers to disrupt the Palestinians’ reaping.

Now, the settlers have international harvest help of their own. The young Christians working in the Psagot Winery’s vineyards near Ramallah in mid-March were members of HaYovel. Last year, this Tennessee-based evangelical ministry started a large-scale operation to bring volunteers to tend and harvest settler grapes. They attach epic importance to their work. 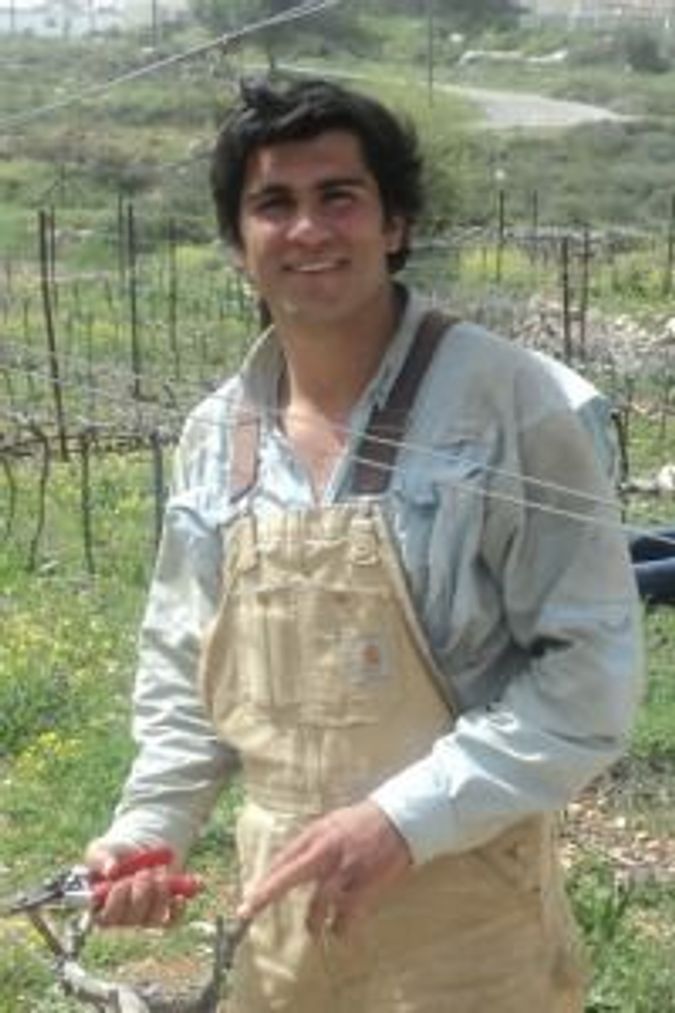 “When you see prophecy taking place, you have the option to do nothing or become a vessel to it,” said volunteer pruner Blake Smith, a 20-year-old farmer from Virginia.

HaYovel preaches the old-school ideology of Religious Zionist settlers with one innovation: a sacred role for Christians.

The group’s members believe that the establishment of the State of Israel, its subsequent conquering of East Jerusalem and the West Bank, and specifically the flourishing of agriculture in the occupied areas are fulfillments of biblical prophecies. Like many settlers, HaYovel cites a prophecy by Jeremiah that refers to the Samaria region of the West Bank: “Again you shall plant vines on the mountains of Samaria.” And like them, HaYovel believes that the settlement movement will help to bring the Messiah to Jerusalem — the only difference being that the volunteers anticipate a second coming.

But these Christians also focus on a prophecy rarely cited by settlers, who tend to place ideological value on using only avoda ivrit, or “Hebrew labor,” whenever possible. “And strangers shall stand and feed your flocks, and foreigners shall be your plowmen and your vine-dressers,” Isaiah prophesized to the Israelites.

Basing itself on this verse, HaYovel — which takes its name from the Bible’s twice-a-century agricultural jubilee — has made reverence of settlers into a central religious virtue.

“Being here, we just want to serve — and to bless the Jewish people in building up the land,” said Joshua Waller, a HaYovel ministry leader and one of the 11 children of Tommy Waller, the group’s founder and spiritual head. During a lunch break, a settler with yarmulke and sidelocks came to address volunteers. They keenly asked him to explain why the international community is wrong and the West Bank is not really occupied, and seemed prepared to accept what they were told. “We are not here to teach anything, just to learn,” Joshua Waller said shortly before the talk began.

To some of the volunteers, becoming settler laborers is a way of righting a historical Christian wrong. “This is a crazy time,” said Joe Trad Jr., a 23-year-old college dropout from Missouri. Over 2,000 years of contention, he said, “we saw Constantine and the Holocaust. Yet today, in this spot of the world, you have Christians and Jews for the first time with the same goal.”

The volunteers are a mix of people who, like Smith, had a mainstream Christian upbringing and were drawn to HaYovel out of curiosity; people from families that gave up the organized church to develop their own brand of religion, one they see as closer to Judaism, and some people who are emerging from personal crises.

Trad, a former alcoholic and cocaine addict, went through rehab and became a Christian two years ago. He described his volunteering as a way of giving thanks “for what the Lord has done for me in my life by freeing me from these addictions.”

Aaron Hood, a 21-year-old HaYovel staff employee, comes from a Tennessee family of 14 children that gave up on any organized church and started observing the New Testament and the Hebrew Bible according to its own understanding. The family observes Saturday, not Sunday, as a rest day.

The Waller family is similar. In 1998, Tommy Waller, a FedEx manager with a Baptist background, and his wife, Sherri, a Methodist Mary Kay saleswoman, left their jobs and went to live in an Amish community in Tennessee, though they did not become Amish.

The Wallers developed their own religious approach, based on their own Scriptural interpretations, and built up an informal group of a few families who prayed and studied together. Tommy Waller visited Israel for the first time in 2004, and resolved to start an initiative to help settler farmers. He set up HaYovel and began bringing small delegations to the West Bank in 2006 — the same year that he left the Amish community. Last year, he expanded the operation, bringing in 300 instead of his normal retinue of fewer than 100. He hopes to reach 400 this year.

HaYovel’s religious devotion to settlers means that the organization is welcome even in the West Bank’s most ideological settlements — places that generally like to preserve a tight-knit, exclusively Jewish community.

The group does have some opponents who fear that HaYovel is not honest when it denies any missionary agenda. Shlomo Aviner, chief rabbi of Beit El, rejects any joint Jewish-Christian ventures. He spoke to the Forward about his opposition to the group. This past summer, residents of Har Bracha near Nablus protested the presence of HaYovel members to the village secretariat. The controversy died down quickly when residents learned that the settlement’s rabbi, Eliezer Melamed, a hard-liner who has sworn not to accept Christian donations for his yeshiva, had ruled that HaYovel is “not working to convert us, God forbid, rather, to strengthen us.”

Aside from the ministry’s reverence for Jews, the other factor making it welcome in settlements is simple economics.

Settler wineries are flourishing. Eshkol Hazahav, one of Israel’s most prestigious wine-tasting competitions, awarded West Bank settlement wineries a record seven of its 50 prizes in 2010. But settler wineries tend to be smaller than those on the other side of the Green Line that divides the occupied West Bank from Israel’s pre-1967 boundary. The settlers complain that margins can be tight — especially as many of them, for ideological reasons, refuse to employ Palestinians, who will generally work for less money than Jews.

HaYovel’s volunteers work for long stints, sometimes up to three months, providing hundreds of hours of free labor at the busy seasons of the grape-growing year. They choose vineyards, and only vineyards, to deploy their help because farming them is particularly labor-intensive, and because they are mentioned specifically in biblical prophecy. In the latest trip, which ended on March 20, 35 volunteers pruned a total of 100 acres of vines at Psagot, Shiloh and elsewhere. “It takes a lot of expenses off farmers, who are struggling in this area,” said Nir Lavi, owner of the Har Bracha Winery.

The HaYovel faithful are well aware of strong anti-settlement lobbies among both Jews and Christians. During their latest volunteer stint, Peter Beinart, a prominent liberal pro-Israel writer, published a controversial New York Times op-ed piece calling on supporters of Israel to boycott settlement products (and proactively patronize other products from Israel) in order to increase pressure for a two-state solution that he sees as crucial for ensuring Israel’s future as a democratic state with a Jewish majority.

Meanwhile, just a short distance from the vineyards that HaYovel members were tending, a conference in Bethlehem called Christ at the Checkpoint convened 300 Christian leaders, academics and activists to discuss how, in their view, Israel’s occupation of the West Bank violates Christian values.

HaYovel responds to such viewpoints with two words: covenant and prophesy.

Tommy Waller insists that his ministry bears no antagonism toward Palestinians, whom it wants to see living peacefully in the West Bank. But he insists that the biblical promise to give the Israelites the Land of Israel, and various prophecies, justify Jewish rule there. Given the significance of West Bank sites to Jewish history, he argues that demanding an end to Jewish rule in the West Bank is akin to “anti-Semitism.”

“If you take away Shechem [Nablus], Beit El, Shiloh and Hebron — places where Jewish identity came to being,” asked Waller, “is there still a Jewish identity?”