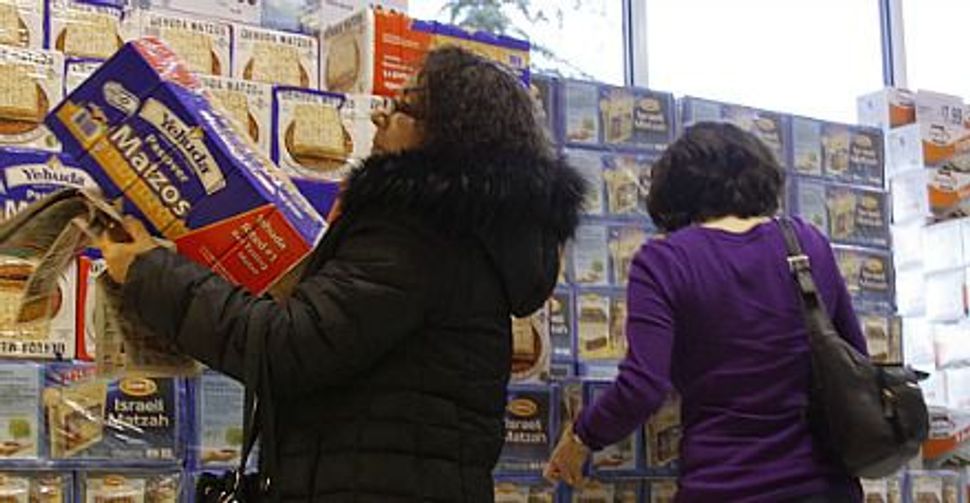 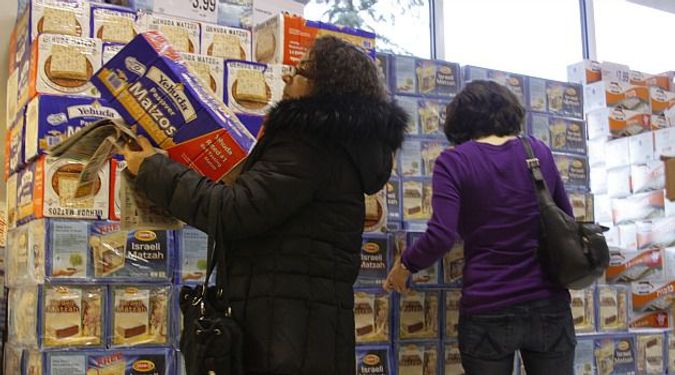 Even Drier, Please: Shoppers pick up boxes of matzo for Passover. Competition from Isreaeli brands has shaken up the market for unleavened bread. Image by shulamit seidler-feller

Psst! That 5-pound bundle of Streit’s matzo you just bought for $8.99 probably cost the store about $14.99. Your friendly neighborhood supermarket manager was willing to take the $6 hit just to lure you in so you’ll stock up on Manischewitz gefilte fish and Gefen dish detergent.

For years, supermarkets have treated Passover matzo as a loss leader — a product sold at a steep markdown to lure Jewish shoppers and their expensive Seder shopping lists. In highly competitive markets such as the New York tristate area, some stores are literally giving it away.

In recent weeks, shoppers at Waldbaum’s supermarket, in the Long Island town of Great Neck, N.Y., could choose between a $3 coupon for a bundle of heavily discounted American matzo, or a free bundle of Israeli matzo with every $25 purchase.

Such fierce competition is beginning to hurt American producers.

The Great Atlantic & Pacific Tea Company, which owns Waldbaum’s, Pathmark, Super Fresh and other stores, bought one-fifth the amount of Streit’s matzo this year compared with last year, said Streit’s president, Aaron Gross. If stores have to give away matzo, Gross said, they are turning increasingly toward “cheaper Israeli products.”

“We’re getting tons of calls from consumers, mostly on Long Island, just looking for Streit’s, and they can’t find it,” Gross said.

Paul Bensabat, one of the two CEOs of New Jersey-based Manischewitz, said he did not wish to comment on what other manufacturers and retailers are doing.

“Contrary to other brands, we cannot afford to be part of the games people play,” Bensabat said. “We basically have one line of direction, which is to produce great-quality products and to make them as competitively as we can.”

Lubinsky said demand was being driven by a rise in the quality of Israeli matzo and an improvement in packaging. But he said price was also a major factor.

American manufacturers are selling 5-pound bundles of matzo wholesale this year for between $10 and $12, Lubinsky said. The same Israeli matzo bundles are selling at between $6 and $7.

Industry officials say matzo is being produced more cheaply in Israel because of lower labor costs. “We’re a union shop,” said Gross, whose business has been making matzo on the Lower East Side for almost 100 years, “and between health insurance and labor and subsidies on flour, it’s a lot more expensive.”

Kobi Afek, marketing director of Osem USA, the American arm of Israeli manufacturer Osem, denied that there was a big disparity between the wholesale price of domestic and Israeli matzo. He pointed out that since matzo is such a simple product, production costs ought to be very similar.

“All you need is water and flour and to make it in less than 18 minutes,” Afek said, adding that any difference in price may arise from other American companies having to rely on Passover sales for a larger share of their annual revenue.

Afek said Passover products accounted for just 25% of his company’s annual revenue and that matzo sales in particular are low in Israel during the rest of the year.

“In Israel you barely find people who will eat this kind of cracker year-round,” Afek said. “We suffer enough from other things.”

The prize for stores landing Passover shoppers is huge, Afek said. According to Osem’s figures, the average kosher household spends between $1,500 and $2,000 on Passover food.

Barry Eizik, kosher category manager of The Great Atlantic & Pacific Tea Company, said there is “no ironclad reason” that a company chooses to discount one matzo brand more heavily than another.

Eizik also denied that imported matzo is necessarily cheaper than domestic matzo. He said the choice to stock one brand over another often comes down to what is “sought after and what the customer would want more.”

Shoppers at Waldbaum’s one recent evening were, of course, oblivious to the price wars. Standing in front of a towering display of Israeli matzos Osem and Yehuda and American matzos Manischewitz and Streit’s, they all appreciated the discounts, but few expressed much in the way of brand loyalty.

Several people, including a few men and women from the Persian Mashadi community, said they picked up free Israeli matzo because they intended to give it to charity. One Mashadi woman, who did not wish to give her name, said she would buy handmade shmurah matzo ($17) for herself.

During a two-hour period, only two shoppers expressed a preference for one brand. After plopping a 5-pound bundle of Manischewitz in her cart, Carlene Campbell declared, “It just tastes better.” Anat Gluzman, an Israeli shopping with her husband and son, said she was disappointed that Waldbaum’s had sold out of her favorite matzo, Aviv.

Instead, Gluzman, whose cart already contained an enormous multipack of Kedem grape juice, chose a bundle of Yehuda matzo. “It all tastes the same anyway,” she said, jabbing her neck with her fingers “It all gets stuck in your throat.”

Matzo manufacturers, of course, don’t want you to believe that all matzo is the same. That much is clear from a brief observation of the packaging wrapped around the 5-pound bundles. Streit’s, with its signature pink wrapper, tugged at the heartstrings with its misty-eyed tagline, “the taste of a memory.”

Osem appealed to Zionists by having ”Israeli Matzah” prominently emblazoned on the package’s side, where an upturned hand cupping a tree promised that $2 from every purchase goes to the Jewish National Fund. Is Manischewitz the Walt Disney of matzo? It certainly seemed that way, with its red stars bursting out of a blue splash and the promise of a free trip for a family of four to Washington for the winner of its “Find the Afikomen” competition.

Yehuda was the only brand that did not appear to have an identity at all. Its plain packaging simply boasted that it was the “#1 best tasting matzo” — as rated by the San Francisco Chronicle. Such a bold claim will be put to the test this Passover by Ed Edelstein, who picked up a free bundle of Yehuda matzo.

“I will probably come back tomorrow and get the other one,” said Edelstein, 60, gesturing toward the free Osem bundles. “We’ll have a taste-testing contest at my house.” Edelstein will have to act fast.

Jim Prongay, manager of the Great Neck Waldbaum’s, said he was already down to his last container of matzo after receiving four container loads in mid-March. Each one of those containers held 3,300 5-pound bundles of matzo.

“The warehouse is out of Aviv,” Prongay said, “and Streit’s sent its last six cases today.”

In fact, if you’re reading this and you haven’t yet stocked up on matzo, you may be too late.