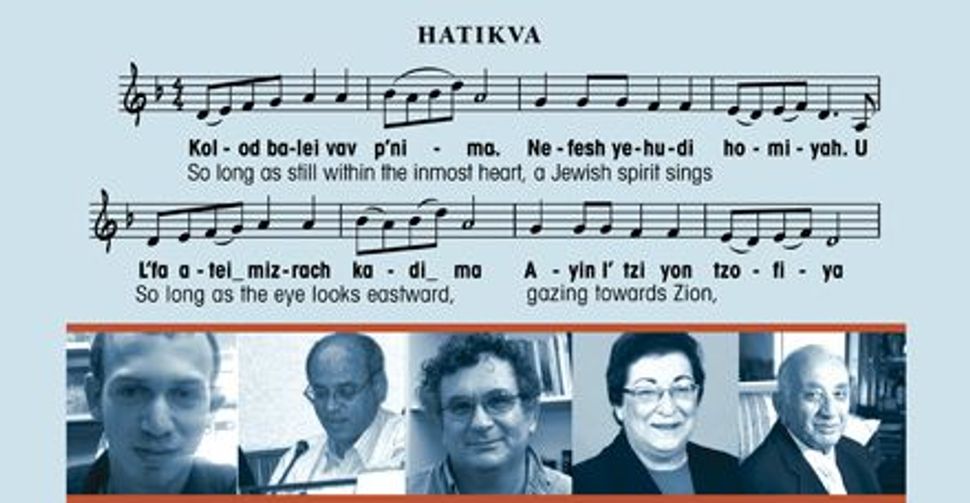 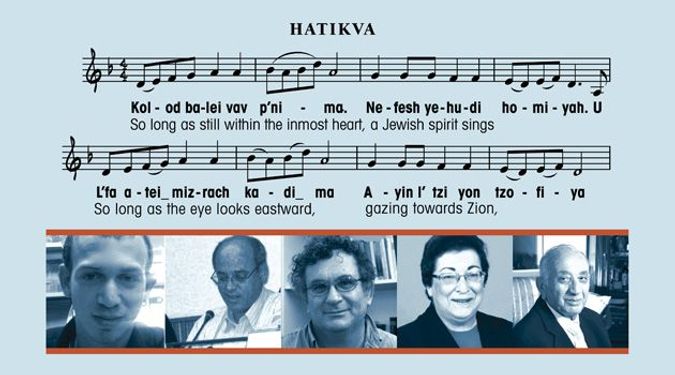 To Change or Not? Israelis are split over whether the country?s national anthem should be changed. Image by richard harrington

When an Arab Supreme Court justice stood silent instead of singing the national anthem at a public ceremony in late February, it sparked a furor on Israel’s nationalist right. Some lawmakers said that the judge, Salim Joubran, should be dismissed, and Yisrael Beiteinu’s David Rotem went so far as to claim that he “spat in the face of the State of Israel.”

But perhaps more telling was the fact that many officials at the very highest levels of the state accepted, and even defended, Joubran’s silence. This acceptance by such officials as Prime Minister Benjamin Netanyahu highlighted the fact that in Israel, where one in five citizens is Arab (excluding an estimated 3.2 million Palestinians under occupation), the nation’s leaders expect the national anthem to be sung by only part of the nation. This stems from wide recognition that most Arabs, living in a self-defined Jewish state, cannot be expected to embrace the anthem’s lyrics about how “a Jewish soul still yearns” for “Zion.”

Netanyahu conveyed his support to Joubran personally via his senior aide, Isaac Molho, according to the Israeli daily Haaretz. Likud lawmaker Moshe Ya’alon told reporters that criticism of the justice “reeks of persecution due to his origin.” There was approval for Joubran within the justice system, as well, and his fellow Supreme Court justice, Elyakim Rubinstein, publicly backed Joubran’s stance.

Even in the military, where discipline during ceremonies reigns supreme, officers accept principled silence from Druze and Bedouin soldiers when the anthem is sung. “They are required to be respectful but not to sing,” military spokesman Eytan Buchman told the Forward.

Like Arabs, Haredim, or ultra-Orthodox Jews — another 10% of the population — tend to stay quiet when “Hatikva” is sung. This is partly because it is a symbol of Zionism, a movement they don’t embrace, but also because they regard its composer, Naftali Herz Imber, as having been antagonistic to religion. Among other things, the word that Imber used in the anthem to express freedom (chofshi) has the connotation, for many of them, of breaking free from religious law.

In fact, the principle “Hatikva”-shunning demographic groups in Israel — Arabs and Haredim — are growing faster than any others. This raises the question that the Forward asked 10 citizens, including two Israel Prize winners: Is it time for an anthem change?

Former Meretz lawmaker Naomi Chazan, one of the best-known figures of the Israeli left, is currently president of the New Israel Fund.

“I like the Canadian way, because it’s elegant,” said Chazan, who thinks that Israel would do best to follow the Great White North’s example. Canada has two official versions of its national anthem in two languages, each of them with different wording. Chazan foresees “Hatikva” staying in place as the Hebrew anthem, supplemented by an Arabic anthem that would be themed on values of “citizenship and equality.” She said of “Hatikva,” “It has meaning to me, but the status quo has to be explicit that you can’t expect non-Jewish citizens to sing these words.”

“I would not touch it — it’s good for here and now,” said Sheriff, who considers “Hatikva” a key part of Israel’s musical heritage. Sheriff loves its “beautiful tender melody,” but is even more enthusiastic about the lyrics, which express the idea that the current State of Israel is the fulfillment of the “yearnings” of the Jews in the past and their “hope for the future.” He considers the way that the lyrics combine past, present and future to be “very special.” Discussing the possibility of even small alterations to the anthem, he said, “I don’t like compromises,” adding that the broad theme of hope — in Hebrew, tikva, as in “Hatikva” — is universal.

The anthem is “the last part to solve, because it’s the easiest to solve,” said Zeidan, who thinks that the whole identity of Israel needs rethinking. First of all, he wants Israel to become a binational state, or simply a democracy without the Jewish label. The anthem should reflect “democracy, human rights and other values like this,” he said. But unlike Chazan, he thinks it essential that Jews as well as non-Jews, via one shared anthem, pay tribute to these values “which are important to the majority as well as the minority.” The revamped anthem, he said, should be “a song that is neutral — more human than Jewish, Christian or Muslim.”

Kamal Mansour, a leader in Israel’s Druze community, was adviser to Israeli presidents on minority affairs for more than 40 years.

“I don’t know it — I don’t remember all the words,” Mansour, another winner of the Israel Prize, said when asked if he thought the national anthem should be changed. Mansour was awarded the Israel Prize at a glittering state ceremony years ago on Israel’s Independence Day, for “lifetime achievement and exceptional contribution to society and the State.” It was a befitting honor on an appropriate day for a keen patriot. But despite his commitment to the state, Mansour said that when “Hatikva” is sung, he doesn’t necessarily join in on all the lyrics. “I stand up and I respect it,” he stressed. Asked whether the anthem should change, Mansour was undecided. “Even if they changed it, I don’t know who would accept it — whether many of the Arabs in Israel would sing it.”

Israel’s most renowned historian, Benny Morris, was the first Israeli scholar to challenge the Zionist narrative regarding 1948 and write that Palestinian refugees had not left their homes out of choice. Formerly an icon of the Israeli left, over the past decade he has moved to the right. He described Israeli Arabs as a “time bomb.”

“At the moment I can’t see an answer,” said Morris, who viewed the issue as intractable. “It’s the right anthem for the Jewish people as a state, but difficult, as there are lots of Arabs in Israel.” Regarding the Arab high court justice’s refusal to sing the anthem, Morris said, “I can see his problem, and I can see the Jewish majority’s problem with him.”

Despite moving to Israel under the Law of Return, like 300,000 other immigrants from the Former Soviet Union, Ludmilla Oigenblick is not Jewish. The Moscow native directs The Association for the Protection of Mixed Families’ Rights, which advocates on behalf of non-Jewish immigrants to Israel.

“I am not Jewish, but it is the hymn of my country and I sing it — always,” Oigenblick said, stressing the final word. What goes through her mind when she sings about how “a Jewish soul still yearns”? She answered, “I think about the difficult history of the Jewish people.” Most non-Jewish immigrants “are okay with the hymn,” Oigenblick said. “They consider themselves Israelis and know it was composed here.” It is common, however, to see FSU immigrants — Jewish and non-Jewish — stay silent when it is sung simply because they don’t know the words. “They don’t participate often in the kind of ceremonies where it is sung and often don’t know it,” she said.

Rabbi Nahum Rabinovitch is an influential halachic authority and settler ideologue. He heads Yeshivat Birkat Moshe, in Ma’ale Adumim, in the West Bank.

“It seems to me that the whole discussion is a rather artificial one,” Rabinovitch said. “The national anthem of many states has passages that not everyone can identify with — so what? Either they can keep their mouths shut, as this judge did, and that’s okay, or sing anyway.” He said that Britain’s anthem, “God Save the Queen,” does not speak for anti-monarchists or atheists and that America’s refers to events that many citizens “did not participate in or cannot identify with.” He said that these anthems have become part of their respective national cultures even if not every citizen agrees with every word, leading him to the conclusion that “the national anthem is much more than the words or statements it contains.” As such, “Hatikva” should be retained.

Rabbi Berel Wein is a Jerusalem-based Haredi author and lecturer best known for his English-language series of books and audio lectures on Jewish history. He is a senior faculty member at the Ohr Somayach yeshiva, in Jerusalem.

“I’m confident that eventually [Psalm 126], Shiur Hama’alot, will represent the ideas of the State of Israel more than ‘Hatikva,’” said Wein, who wants, and expects, Israel’s anthem to change — but to one that is more Jewish, not less. He thinks that as demographic changes make Israel’s population more Orthodox, it will come to regard Psalm 126, popularly known as Shiur Hama’alot, as more appropriate. The psalm, which was a contender for the anthem upon Israel’s independence, declares, “When the Lord brought the captives back to Zion we were like dreamers.” Wein said of the psalm, “It expresses why we are here — that it was a dream and the Lord helped us to realize the dream.” Wein deemed Arab objections to the anthem as it currently is invalid because Israel is a Jewish country and because the “Jewish yearning” of the song is relevant even to Arabs. “Were it not for the ‘Jewish yearning’, the Arabs of this area would still be living under the Ottoman Empire and wouldn’t have the advances that Israel has brought them,” Wein said.

“It’s a Jewish country, so the anthem needs to be related to the Jewish people,” said Marom, who rejected any change. “It’s not an Arab country, so with all due respect, if Arabs don’t want to sing, they shouldn’t, but ‘Hatikva’ should stay.”

Amit Pinsker, 21, lives in the central Israel city of Yehud. He works in a bookstore.

“I finished my army service three weeks ago, and after every event, we raised the flag and sang the anthem, and it was very important to me and very meaningful,” he said. “Hatikva” is, “in a way, holy for the Jewish people.” Pinsker is against changing its wording or adopting a new anthem — but he wants to see new lines added that would speak of universal values, lines that he hopes will make it represent both Israel’s Jewish and democratic character. “Changing it would be problematic, but adding would be great,” he said.