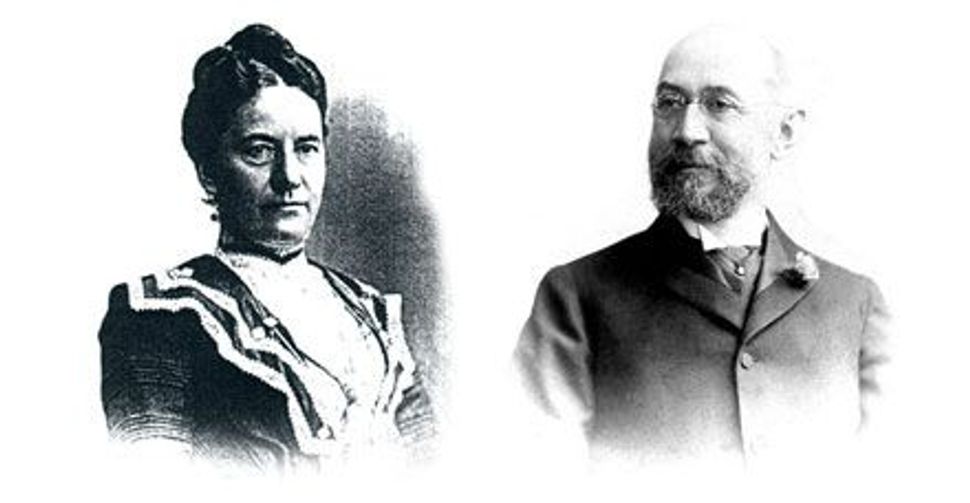 It was a simple yet generous gesture. About 5,000 employees of Macy’s department store contributed what little they could afford to create a memorial plaque for their boss, Isidor Straus, and his wife, Ida, who died in the Titanic disaster.

“Their lives were beautiful and their deaths glorious,” read the inscription on the bronze bas-relief that for almost 100 years graced a wall inside what became known as Macy’s Memorial Entrance, on 34th Street in New York.

But what happened to the plaque is a mystery, one that carries special meaning at this time, the 100th anniversary of the sinking of the world’s largest passenger liner of its day.

“I went in one day and it wasn’t there,” said Paul Kurzman, Isidor Straus’s great-grandson and chairman of the board of the Straus Historical Society.

Kurzman, 73, is convinced that he looked at the spot on the wall where the bronze likenesses of his great-grandparents’ faces used to be, and saw instead a blank space.

Depending upon whom you ask, the plaque is in storage, on the wall of a jewelry manager’s office, or accessible only with the help of a construction crew.

Either way, Scott Byers, director of Macy’s archives, told the Forward in February that Kurzman was mistaken in his recollection.

“We closed that entrance in 2001 or 2002” for renovations, Byers said of the Memorial doorway, adding that he is certain the plaque was never removed from the wall.

Today, millions of shoppers hurrying along 34th Street pass the Memorial Entrance, which has been closed off with sheets of green-colored metal. Inside the store, if the tablet is indeed still in its place, it is concealed behind a temporary wall flanking a row of jewelry counters displaying diamond solitaire rings.

Byers said Macy’s explored the idea of removing the plaque while the store was being renovated, but the cost of cutting the tablet away from the marble wall was prohibitive. So, it was left in its place where, Byers said, it had become a decoration in a cosmetics manager’s temporary office.

Listen to a podcast with Paul Kurzman, Isidor Straus’s great-grandson:

“I haven’t seen it physically in 10 years,” he said, adding that he does not expect to see the tablet again until the Herald Square store is further along in its four-year, $400-million renovation project, which is due to be completed in 2015.

The Forward asked Macy’s for permission to see the plaque in February and in March.

At first, Elina Kazan, director of media relations for Macy’s, said that the request would be difficult to fulfill because the plaque was in a fine jewelry area and a visit could pose security concerns. Later, she said the company would need to call in a construction team in order to provide access to the plaque, but she declined to give further details. “Unfortunately, there is no access to the plaque,” Kazan said.

The Straus family owned Macy’s, including its flagship store in New York, from the late 1800s until a group of board members, led by chairman Ed Finkelstein, took over the company in a leveraged buyout in 1986. It is difficult to imagine today the outpouring of grief that followed the deaths of Isidor and Ida Straus.

In May, 1912, more than 2,000 people packed Carnegie Hall where, on a stage draped in black, the couple was eulogized by industrialist Andrew Carnegie and banker Jacob Schiff, among others, according to The New York Times. Weeks earlier, the Forverts reported that 40 people were injured as about 40,000 tried to crowd into a memorial service at the Educational Alliance on the Lower East Side.

During the years that followed, the couple was memorialized in public buildings and spaces around the world, including a park at 106th Street near the couple’s home on Manhattan’s Upper West Side.

“Mr. Isidor,” as Kurzman says Straus was known by employees, regularly walked the shop floor, a pink carnation boutonnière stuck in the lapel of his dark suit jacket as he greeted workers by name.

Kurzman, a professor of social welfare at the Silberman School of Social Work at Hunter College in New York, said that employees today “would be stunned if the CEO of an international corporation started asking them, by name, how their husband was recovering from gallstones.”

That devotion to social welfare has become a part of Straus family tradition, according to Kurzman. He says it is probably what drove him to pursue a career as a professor rather than as a businessman.

American-Jewish historian Jonathan Sarna said that because of the tragic way in which Isidor died, “it is not easy to cut through the accolades to get to the true Straus.”

“Still,” Sarna added, “it is striking that workers, on their own accord, created a memorial.”

There is certainly plenty of evidence that the Strauses cared for their workers.

Isidor and his brother Nathan, who also ran the store, were the first American businessmen to create a Mutual Aid Society for employees, according to June Hall McCash, author of “A Titanic Love Story: Ida and Isidor Straus.” The Strauses also set up a burial society and a basic health insurance program for their employees, and they built a large cafeteria where workers could get a hot, subsidized meal each day.

It was in that cafeteria, on the afternoon of Sunday, June 8, 1913, that Kurzman’s mother, then Eleanor Hess, unveiled the bronze tablet in front of about 5,000 workers, their spouses and their children.

Kurzman said that his mother had never spoken to him about the ceremony. But he has pieced together the event from research and contemporary news reports.

New York State Supreme Court Justice Samuel Greenbaum, a co-founder of the Educational Alliance, was one of the speakers that day.

“I understand many people in that cafeteria were drawn to tears,” Kurzman added.

Newspaper accounts of the ceremony do not mention tears. But they do reveal that the idea for the memorial tablet was conceived by “a young girl” employed at the store.

According to a report in The American Hebrew & Jewish Messenger, Macy’s general manager, Sylvester Byrnes, told the assembled workers: “Monuments have been and will be erected in their memory by public organizations, societies and individuals. But I know of no tribute so genuine, so simple and beautiful in its inception, so spontaneous in its execution, as that which calls us together today.”

The newspaper goes on to say that each of the employees’ names is inscribed within the tablet. But neither this report, nor others give the name of the young girl who suggested the plaque or how much it cost. What we do know is that when Isidor and Ida’s son, Jesse Straus, accepted the plaque on behalf of his siblings, he called it a “fitting climax” to the tributes that had been paid to their parents.

Straus reportedly told the employees: “Your thoughts to erect a tablet at the entrance to the workshop in which our father spent so much of his life, and for which he had a strong attachment, is as unusual as it is expressive of your loving sympathy, and words fail me to express our appreciation and gratitude.

“No other mark of respect, no greater crown of glory, could they know of it, could have been offered our parents than this from you.”