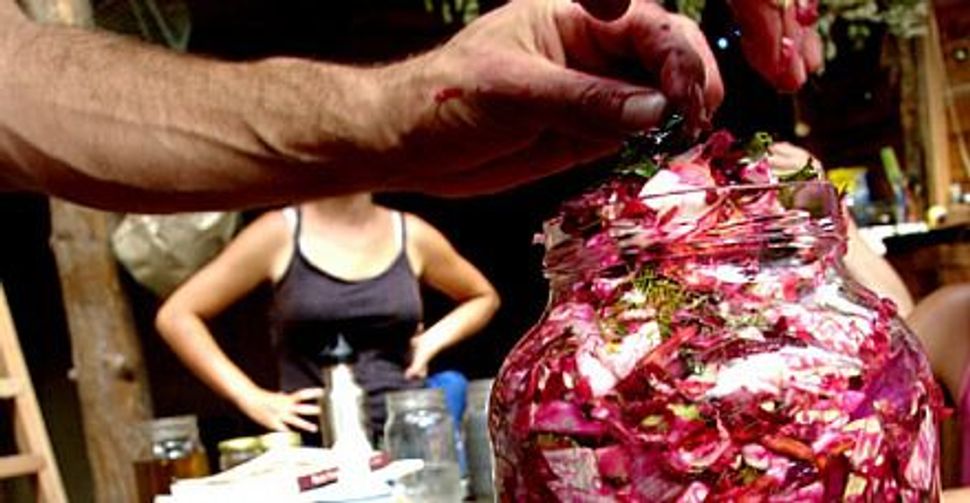 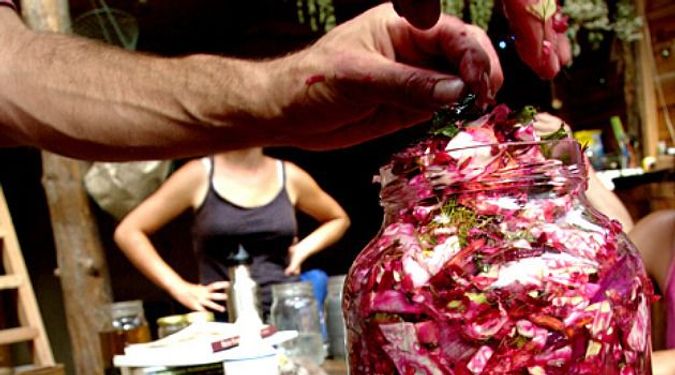 Fermentation Nation: Sandor Katz is a big believer in the power of microorganisms to create better foods. Image by sandor katz and chelsea green publishing

If you’re a foodie or a farmer, a DIY enthusiast or home kitchen tinkerer, or merely a conscientious objector in the battle to standardize, industrialize and globalize every last human commodity, you may already be familiar with Sandor Ellix Katz.

For close to a decade, Katz has been traveling the world, preaching the lost art of fermentation, the process through which invisible microorganisms (such as bacteria and yeast) transform ordinary fruits, vegetables, grains and beans into some of our most prized foodstuffs: beer, wine, bread, yogurt, soy sauce, pickles, chocolate and much more. 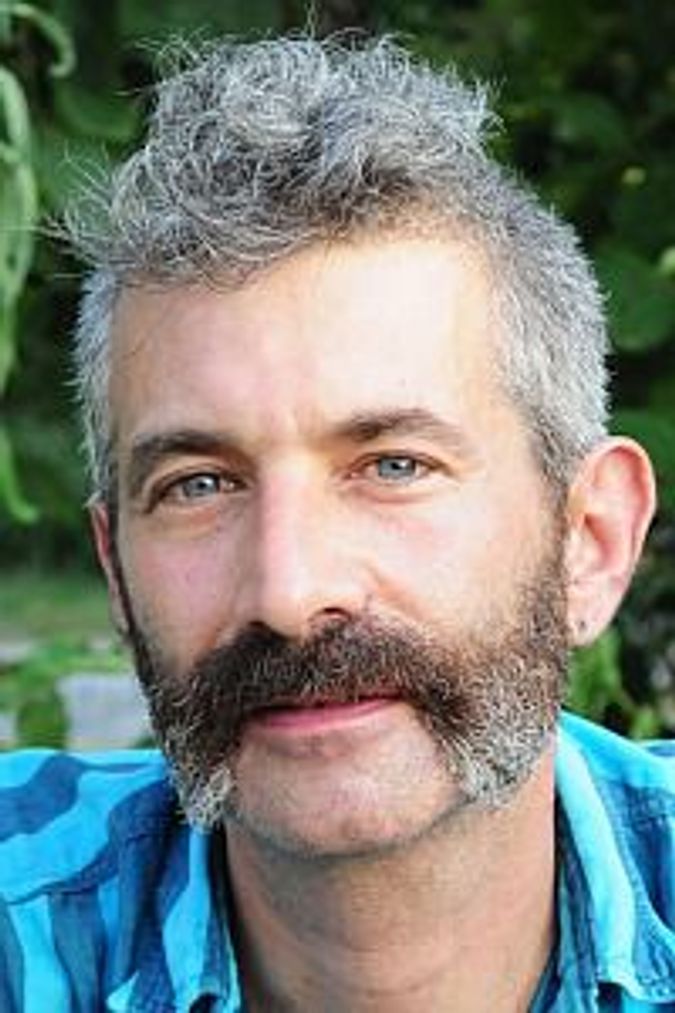 Katz first made a name for himself as a fermentation evangelist in 2003, with the publication of “Wild Fermentation: The Flavor, Nutrition, and Craft of Live-Culture Foods” (Chelsea Green Publishing). Since then he has conducted countless workshops, fielded thousands of troubleshooting emails and acted as something of a sage to the growing corps of home fermenters. This May, Chelsea Green will publish his accumulated wisdom in “The Art of Fermentation: An In-Depth Exploration of Essential Concepts and Processes from Around the World,” a 500-page exegesis on the basic principles and practices first laid out in “Wild Fermentation.”

While it can’t hope to be comprehensive — subtopics like bread and beer can scarcely be exhausted by a shelf’s worth of books, let alone a single volume — the book marks a substantial leap forward in Katz’s effort to convince the world of both the wonders and the essentialness of fermentation.

Fermentation is much more than a neat culinary trick; it is, to hear Katz tell it, the very stuff on which human life depends. Human culture is inextricable from the other kind of culture, the collection of microorganisms that brewers and bakers and cheese mongers have learned to manipulate in the service of their marvelous concoctions. But instead of cultivating an appreciation for this invisible, teeming horde, we have made war on it through excessive use of antiseptics and antibiotics.

“If we succeeded in wiping out all the bacteria, we’d just be committing mass suicide,” Katz said last May at the Freestone Fermentation Festival in Northern California. “That’s the context in which all life exists. That’s why fermentation is so universally practiced.”

In the era before refrigeration, fermentation allowed humans to store food for long periods without the risk of spoilage, which likely explains its ubiquity in world cuisines. But today, with most Westerners purchasing these marvels at the grocery store, the alchemical processes underlying their creation — and the knowledge necessary to manipulate them — have largely vanished from our cultural repertoire.

Enter Katz, who has arguably done more than any other person to amend this. Through his writing and teaching, he has labored to spread the lost gospel of the fermenting arts. And judging from the proliferation of artisanal kraut makers and bread bakers and craft beer brewers in recent years, Katz is succeeding.

Katz’s journey to fermentation missionary from food novice began in a little Jerusalem of microbially enhanced delicacies: New York City’s Upper West Side. Jewish cuisine is littered with the handiwork of invisible bacteria working their magic: pickles, challah, sauerkraut, salami, Sabbath wine. When Katz was a kid, Zabar’s, the legendary food emporium on Broadway, was a critical feature of his food landscape — the place where barrels of crunchy, pungent pickles were always at the ready.

“Pickles are … a food and a flavor that I really homed in on for whatever reason,” Katz said. “And then, when I got a little bit older and I left New York for the first time, I started realizing that the kinds of pickles I grew up loving weren’t easy to find anywhere.”

For a while, Katz followed the well-trodden path of Manhattan Jewish ambition, heading off to Brown University for college and then returning home to work in then-Manhattan borough president Ruth Messinger’s office, first as a land-use planner and later as a policy analyst. Even then, alternative diets intrigued him. He experimented for a time with macrobiotics, a dietary regimen that emphasizes whole grains and the avoidance of refined foods; on the weekends he’d bake bread and make cheese. “In [Messinger’s] office I was regarded as a little bit of a freak the way I was eating,” Katz said.

Such home-kitchen experiments might have been the extent of Katz’s food ambitions had he not been diagnosed in 1991 with HIV. “My career orientation that had really always been a rudder for my life, my primary directional determinant, that just kind of shed off of me in a moment,” he said.

Katz began casting around for a change he knew was coming but couldn’t quite identify. A chance encounter at Mardi Gras in New Orleans led him to Short Mountain Sanctuary, a community of “radical faeries” living off the land in central Tennessee. “I just couldn’t really believe that it existed, this idea of queers in a rural place,” Katz said. “I guess [I thought] I’m in the place where gays need to be, which is in a big city. And it had never occurred to me that gay culture could flourish in a rural environment.”

Katz’s experiments with fermentation began in Tennessee, mostly out of necessity. For the first time, he had a garden and had to figure out what to do with all that excess cabbage. The search for an answer to that and to related questions forms the basis of “Wild Fermentation.” In his new book, Katz takes those answers much further, delving into the science underlying fermentation and casting a much wider and more global net for ferments to play around with.

Yet, “The Art of Fermentation” is anything but a typical cookbook. Katz is insistent on demystifying the fermenting process, liberating it from the purview of multinational food corporations and returning it to the home kitchen from whence it came. Nowhere in the book does he present what amounts to a traditional recipe. There are no precise measurements or lists of specific ingredients. Instead he offers broad explanations, endless encouragement to experiment and constant reassurance that the underlying processes are safe and effective, refined over centuries by communities that cherished these foods and the knowledge necessary to make them.

“I don’t feel like I can take credit for the popularity of these foods,” Katz said. “Everybody loves fermented foods. I’m just helping people realize how easy it is to make them.”

For a DIY kimchi recipe by Sandor Katz and Ben Harris, visit The Jew and the Carrot.

Ben Harris is a freelance journalist and an organic farmer in western Connecticut.