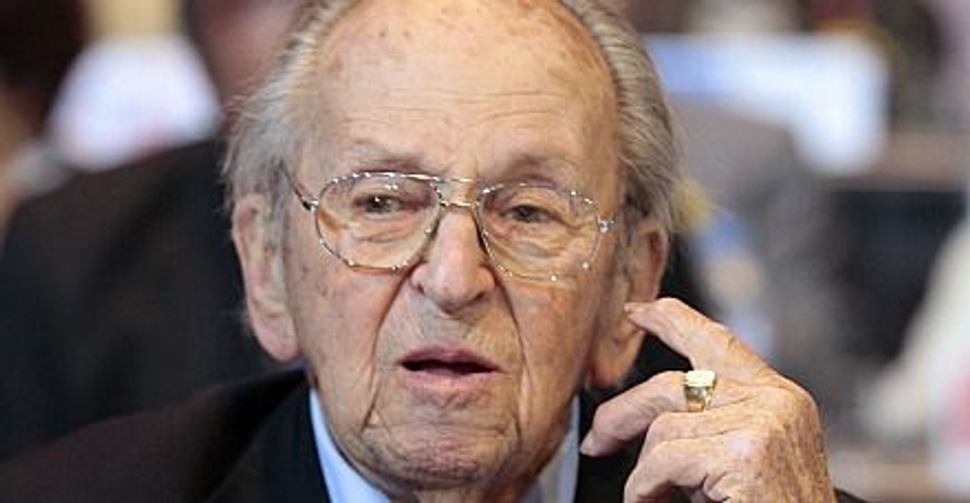 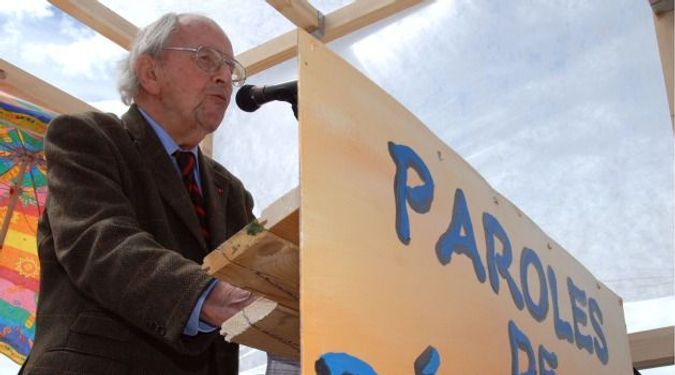 Activist: Raymond Aubrac, who died at 97, was active till the end, penning his memoirs and speaking well into his 90s. Image by L?ASSOCIATION CITOYENS RÉSISTANTS

The last great résistant standing in France, Raymond Aubrac, died on April 10. He was 97. With his passing, France has lost a political and moral figure who helped redeem the nation’s past and stood witness to its present. At the same time, France’s Jews have lost one of their own who courageously, though not always successfully, reminded them of their own moral duties toward the powerless and impoverished in France and abroad.

The child of assimilated Jewish parents, Aubrac — the nom de guerre he took when his family name, Samuel, proved too dangerous in Vichy France — considered himself, quite simply, French. In this regard, he closely resembled other celebrated members of the Resistance who happened to be Jewish: historian Marc Bloch, politician Pierre Mendès-France and political theorist Raymond Aron.

In his book “Strange Defeat,” completed just before he was captured and killed by the Gestapo, Bloch offered a credo that spoke for Aubrac, as well: “I was born in France. I have drunk of the waters of her culture. I have made her past my own. I breathe freely only in her climate, and I have done my best, with others, to defend her interests.”

A novelist could not invent a more propitious event to launch Aubrac’s life than the one life itself provided. He was born on July 31, 1914 — the same day that Jean Jaurès, the great Socialist pacifist and tribune, was assassinated. Along with Emile Zola and Bernard Lazare, Jaurès had championed Captain Alfred Dreyfus, the Jewish officer wrongly convicted of treason in 1894. For Jaurès, the “affair” had nothing to do with Dreyfus’s religion and everything to do with France’s revolutionary legacy and republican principles.

As Aubrac wrote in his memoir, “Where Memory Lingers” (“Où la Mémoire S’attarde”), family debates over Dreyfus not only “nourished” his childhood, but also rooted his political convictions in the republican values of the French Revolution. When the time came to choose between resistance and resignation in the summer of 1940, Raymond and Lucie Aubrac — they had married at the end of 1939 — had in fact made their choice many years before. In the weeks following France’s catastrophic military defeat, they were already planning for the country’s liberation.

From our distant historical and moral perspective, their decision might seem predictable, even normal. Nothing, however, could be less true: The vast majority of French men and women placed their faith for many long months, even years, in Marshal Philippe Pétain, the elderly head of the Vichy regime. Crawling from under the ruins of their suddenly collapsed political and social institutions, suffering from sharp material want, worrying over the fate of more than 1 1/2 million men— husbands, sons, fathers — who were taken as prisoners of war, most French no more thought to resist than to sprout wings. This was true for Jews as well as for non-Jews.

Indeed, in 1940 there wasn’t a Resistance to join. The Aubracs, along with philosopher Jean Cavaillès and journalist Emmanuel d’Astier de la Vigerie, created one of the first resistance movements, Libération-Sud, on the Mediterranean coast, where the Aubracs had fled to live with an aunt. Two years later, Jean Moulin, serving as Charles de Gaulle’s emissary, was trying to bring the various movements under the same organizational umbrella. On June 21, 1943, the Gestapo invaded a house where Moulin was meeting with representatives from several groups, including Aubrac.

With the others, Aubrac was arrested and imprisoned at the notorious Fort Montluc. Shortly after, while he was being transferred to a military hospital, Aubrac was rescued by a commando operation led by Lucie Aubrac, who was then several months pregnant with the couple’s second child. A few months later, the family reached London, the child was born and the couple continued their work on behalf of the Resistance. Aubrac’s parents and a brother were taken to Auschwitz, where they died.

Aubrac’s work continued until his death. A fellow traveler of the French Communist Party, Aubrac explained his belated recognition of communism’s horrors as the result of his wartime experience: Communists played a central role in the Resistance. Moreover, Aubrac, like many others who believed that resistance must lead to revolution, was enamored of the utopian future offered by communism, or what were then known (with a straight face) as “the tomorrows that sing.”

Though the scales concerning the Soviet Union and communism eventually fell from his eyes, Aubrac never swung, unlike so many others from his generation, into the ranks of reaction. Instead, he and his wife remained committed to the revolutionary promise of liberty, equality and fraternity. To this end, they were ardent defenders of the sans papiers, or illegal immigrants in France. Lucie Aubrac once noted dryly that they, too, had once been sans papiers. In 2003, Raymond Aubrac signed the manifesto “Une Autre Voix Juive” (“Another Jewish Voice”), which denounced Israel’s settlement policy and invasion of Lebanon. Not surprisingly, the French Jewish group CRIF overlooked this engagement in its obituary of Aubrac.

Finally, in 2004, Raymond and Lucie Aubrac joined several other grand résistants to mark the 60th anniversary of France’s liberation. These remarkable men and women called on France’s youth to keep alive the spirit of the Resistance, codified in the charter of the National Council of the Resistance. The “three humanistic gestures” they asked the young to embrace were to safeguard hard-won social and economic rights, to fight against social injustices and racism, and to reject the frantic consumerism of our age. Make this battle yours, Aubrac declared, so that the “torch of the Resistance never dies.”

Raymond Aubrac had earned the right to exhort the rest of us; time will tell if we will earn the right to his dogged optimism.

Robert Zaretsky is a professor of history at the Honors College at the University of Houston and a contributor to “The Occupy Handbook” (Little, Brown).