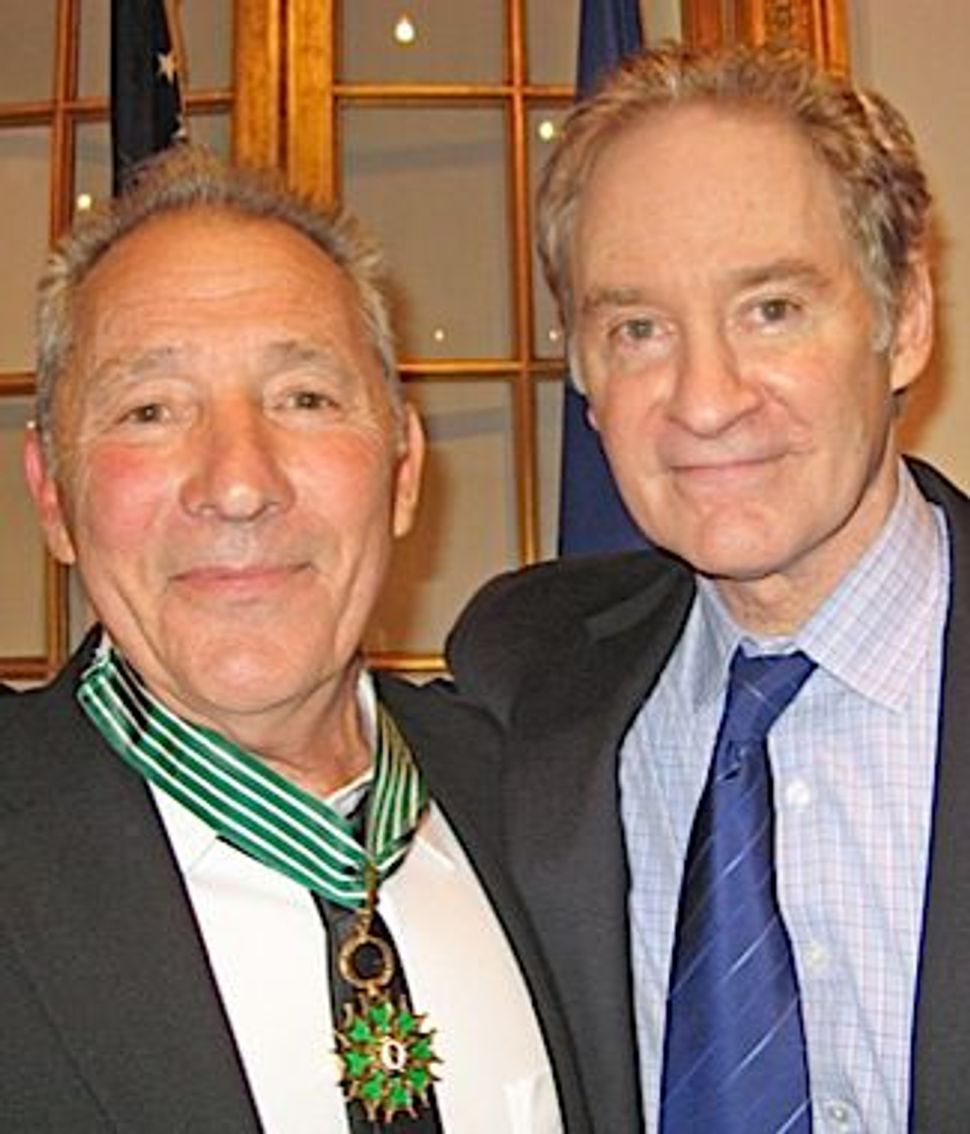 “I parle Français like a Spanish cow,” playwright Israel Horovitz joked as he accepted the insignia of Commander of the Order of Arts and Letters, awarded to him on April 3 from the Cultural Services of the French Embassy, in New York. Antonin Baudry, cultural counselor of the Embassy of France, said that Horovitz “is one of the greatest artists of our time.” He also described Horovitz as “one of the most produced American playwrights in French theater history.” 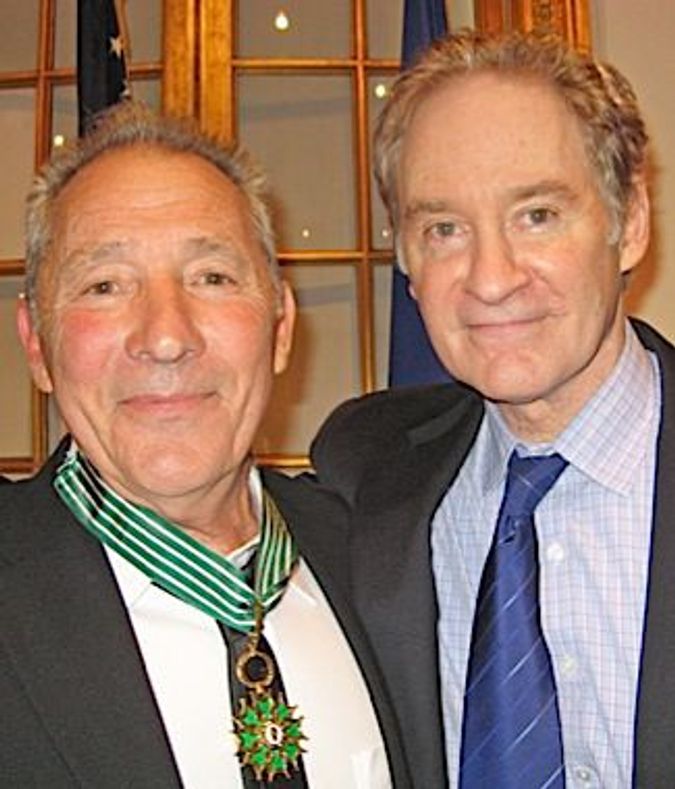 A smiling Horovitz prefaced the reading of his short 2012 play “The Vote in Orange” with a hint that the play’s plot might be perceived as “biting the hand that is feeding us today,” as it spotlights French anti-Semitism. Twelve seated actors — including Kevin Kline, Bobby Cannavale and Judith Ivey — read from the script, which follows the ramblings of an 85-year-old grandmother who accuses an Arab grocery vendor of intentionally “putting garlic on the strawberries” he sold her. The vendor apologizes, but she is implacable. Throughout the course of a 20-minute dialogue, her family members try to reason with her.

Revelations surface about the arrest of a family friend, a “Dr. Friedman,” who with his family was sent to a Nazi death camp — not by the Germans, but by the French police. It also comes out that the grandmother’s husband once worked for the Nazis. She rants: “This isn’t the desert! This is France… Le Pen will win!… The country is going to the Jews and the Arabs!…. I don’t know Jews, but I read about these Arabs who blow up Jews.” At the end of the reading there was applause from family, friends and fans.

Following the performance, Baudry addressed the honoree: “Dear Israel, your favorite statement was, ‘In my life, if I have an experience, I made it into a play… I try to make it better.’” He praised Horovitz’s many plays, the first of which he wrote when he was 13. Other notable plays by Horovitz include “Line,” now in its 30th year of continuous performance off-Broadway at the 13th Street Repertory Company, “The Indian Wants the Bronx” and “The Primary English Class.” His screenplay “Sunshine” won the European Academy Award for best screenplay. Horovitz has received numerous awards, including two Obies; the Writers Guild of Canada’s Best Screenwriter Award; the Prix de Plaisir du Theatre, the Drama Desk Award, and a Lifetime Achievement Award from the B’nai B’rith World Center.

During his acceptance speech, Horovitz recalled meeting Samuel Beckett, with whom he sat for hours, “talking about playwriting.” With 40 of his plays having been translated into French, Horovitz declared: “France is very welcoming to foreign writers. Now 70, in a former life I must have been a snail…. Tonight’s honor is beyond my wildest dreams.”

And Horovitz has another reason to be glad: On April 14, his son Adam Horovitz, of the Beastie Boys, was inducted into the Rock and Roll Hall of Fame.

In 1986 I reviewed the American Jewish Theatre’s production of Horovitz’s “Today I Am a Fountain Pen,” at the 92nd Street Y, for my Forward column.

Harry Potter, Superman, Robin Hood, Mickey Mouse and Others Make It To Carnegie Hall, Thanks to the New York Pops’ Tribute to Hollywood’s Award-Winning Film Scores

It was film nostalgia heaven — sans screen, credits or popcorn — at the New York Pops’ Hollywood Award Winners concert at Carnegie Hall on April 13. The Pops’ music director and conductor, Steven Reineke, recounted that when Steven Spielberg approached composer John Williams about writing the score for his film “Schindler’s List,” Williams was taken aback. He told Spielberg, “You need a better composer to write this score.’ And Spielberg replied, “Yes, but they are all dead.”

Williams’s 80th birthday was celebrated at this concert, with stirring orchestral performances of his scores for two Harry Potter films, “Schindler’s List,” the four “Star Wars” films and “Saving Private Ryan.” The Essential Voices USA chorus, led by Judith Clurman, added emotional depth to performances of “Hymn to the Fallen” from “Saving Private Ryan” and to themes from the “Star Wars” prequels “The Phantom Menace” and “Revenge of the Sith.”

Kicking off the Hollywood award winner program was Eric Wolfgang Korngold’s score for 1938 film “The Adventures of Robin Hood,” which starred Errol Flynn. This work is considered one of the greatest film scores ever written, and Reineke explained that 1938 marked the first occasion in which the composer rather than the studio music department head was awarded the Oscar for best original score. Born in Brunn (Brno), now the Czech Republic, Korngold was invited to Hollywood in 1934 to adapt Felix Mendelsohn’s incidental music for “A Midsummer Night’s Dream.” In 1938 he was invited again to compose the music for “The Adventures of Robin Hood.” Shortly after he arrived in California, the Anschluss took place and he decided to stay in America. The “Robin Hood” score, he reportedly said, “saved my life.”

As a preface to the Pops’ rendition of “Parade of the Charioteers” from Miklós Rózsa’s 1959 film “Ben Hur,” Reineke said that this was “the longest film score ever written.” He also noted that Henry Mancini’s Award-winning “Moon River” from “Breakfast at Tiffany’s” (1961) almost did not make it into the film. Reinike chuckled: “The executives hated it! They were going to cut it. When Audrey Hepburn heard this, she said, ‘Over my dead body!’ They saved it.” Other hits on the program included Maurice Jarre’s theme from “Lawrence of Arabia” (1962), John Barry’s song “Born Free,” From the 1966 film of the same name, and the theme from “Summer of ’42” (1971). The Pops’ “Disney Classics Overture” medley sampled from some of the studio’s 59 Academy Award-winning musical numbers, including “It’s a Small World” and “Mickey Mouse Club March,” which had many in the audience humming along to M-I-C-K-E-Y- M-O-U-S-E.

The New York Pops, founded by Skitch Henderson in 1983 with a mission to create greater public awareness and appreciation of America’s rich musical heritage, is the largest independent pops orchestra in the United States and is the only professional symphonic orchestra in New York City specializing in popular music. In December 2010, Emmy-nominated Clurman conducted a world premiere performance of “Songs of Freedom: A Celebration of Chanukah” at Carnegie Hall.