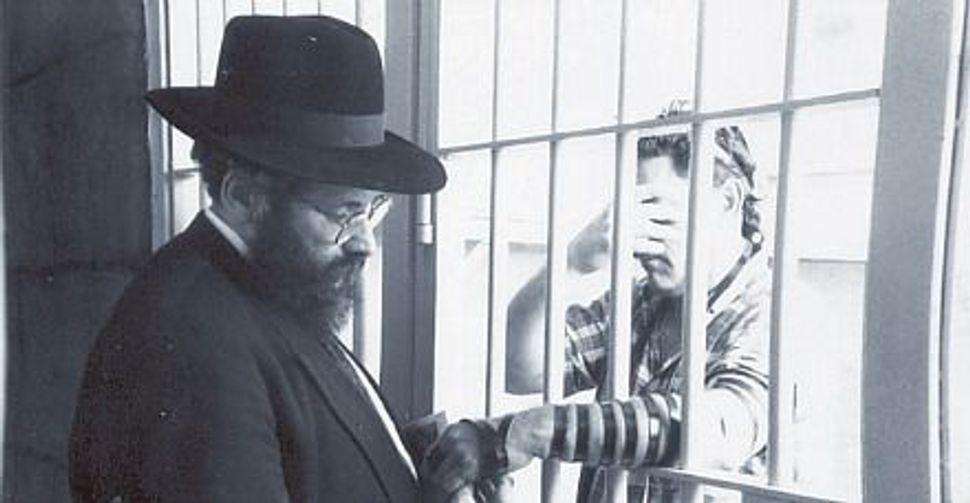 Image by courtesy of aleph institute 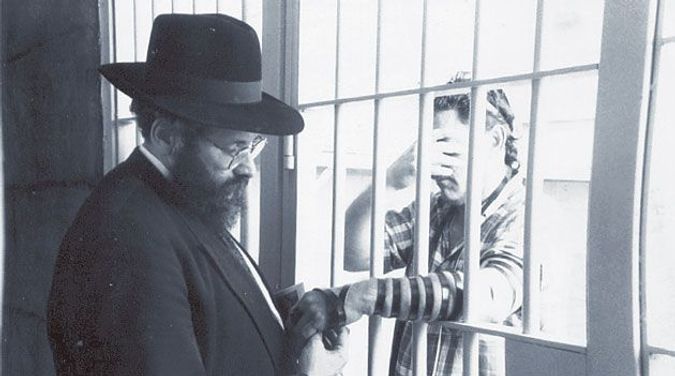 Keeping Kosher: Rabbi Sholom Lipskar wraps tefillin with a prisoner in a Florida jail. Image by courtesy of aleph institute

The tiny population of religious Jews in prison has plenty of company when it comes to keeping kosher behind bars. A number of secular Jews, messianic Jews, Black Hebrew Israelites and, in many cases, people with no Jewish background at all eat a traditional Jewish diet.

Jews, according to one estimate, make up just one-sixth — or about 4,000 — of the 24,000 inmates who eat kosher food in American prisons. And since kosher food can cost more than twice as much as regular fare, it’s costing taxpayers millions to feed all those who want to avoid treyf.

“It is a major problem, and it creates so much animosity” from prison officials, said Gary Friedman, founder of Jewish Prisoner Services International. Friedman provided estimates based on visits to prisons around the country.

The popularity of kosher food among non-Jewish inmates is one reason that many prisons around the country are seeking to curtail or change their Jewish dietary programs. But advocates for Jewish inmates say that prisons could easily solve this problem by limiting kosher food to Jews.

“They want to throw the baby out with the bath water,” Katz said. “Rather than get into the nitty-gritty, they say, ‘Let’s just destroy the whole thing.’”

Kosher food is a hot commodity in prisons for a number of reasons. Some prisoners simply think it tastes better; many others believe it is safer than standard-issue prison fare, according to prison chaplains and advocates. Kosher food also often comes prepackaged, making it easy to trade or sell among inmates.

For instance, at California Men’s Colony, a medium and minimum security facility in San Luis Obispo, Calif., prisoners who keep kosher receive three daily meals in a sack that they bring back to their cells. The meals consist of factory-sealed cut vegetables, frozen or non-perishable dishes like lasagna, and whole fruits and vegetables. Inmates frequently trade kosher food for prison-issued paper money, which can be used to buy items in the facility’s canteen.

“If someone can have special food, that makes them feel special and it makes them appear special to other people,” said Rabbi Lon Moskowitz, the chaplain at California Men’s. “It also has the added benefit of potentially being able to generate revenue on the black market.”

Kosher meals in prison are provided because prisoners in the United States are guaranteed religious freedoms under the Religious Land Use and Institutionalized Persons Act of 2000. If, according to case law, an inmate shows a “sincerely held” religious belief, then he or she is entitled to religious services, such as kosher or halal food.

The law is vague about what constitutes a sincere belief. Last year, there were more than 60 suits filed around the country by inmates claiming they were unfairly barred from following a kosher diet in prison, according to the Religion Clause blog, which tracks freedom of religion cases in prisons. About 40 of these were dismissed. Friedman, of Jewish Prisoner Services International, has himself been sued by inmates who claim they were denied kosher food by his organization, which formerly contracted with the Washington State Department of Corrections to provide religious services to inmates.

The law “leaves room for individuals to disagree about what religions require,” said Luke Goodrich, deputy general counsel for the Becket Fund for Religious Liberty. The Becket Fund is currently appealing a Texas judge’s decision to bar an Iranian-Jewish inmate from receiving kosher food.

The situation is made more complicated by the fact that most American prisons are run on the state level. That means there are 50-plus departments of corrections around the country housing some 1.4 million people, according to a 2010 estimate, each of which has a unique interpretation of the rules about religious practice and diet.

In the federal corrections system, there are some 4,127 individuals receiving a so-called Certified Religious Diet out of a total of 217,000 inmates, or about 2% of the population. The diet costs $2.33 per meal as opposed to $0.99 for regular prison fare, and accommodates Jews and non-Jews with religious dietary needs. In order for a prisoner to access the diet, he must make a request in writing and then be interviewed by a chaplain. If an inmate is denied access, he can reapply in six months.

According to Goodrich, 35 states currently offer kosher meals in prisons. Prison officials, he said, are “rightly hesitant to set themselves up to say who is Jewish and who is not.” They often leave the decision in the hands of chaplains, Jewish or otherwise.

In California, for instance, Jewish chaplains oversee kosher programs at the state’s prisons, feeding kosher meals to about 800 people out of about 140,000 — or about 0.6% of — inmates. California has a strict policy against allowing non-Jewish prisoners to access kosher food, which costs about $8 a day as opposed to $3 a day for the regular diet. Even with the tight rules, California spends some $2 million per year on kosher food. At California Men’s Colony, inmates must fill out forms detailing their familial and religious backgrounds in order to be admitted into the program. Moskowitz said he asks non-Jewish prisoners who want to eat kosher to try practicing Judaism for six months before they can qualify for the special diet.

Recently, a messianic Jew named Margarito Jesus Garcia challenged the California system, claiming that a Jewish chaplain violated his religious rights by denying him kosher food. A California superior court ruled against Garcia, but in January, Garcia won his appeal.

According to California Department of Corrections and Rehabilitation spokesman Bill Sessa, the department is considering shifting away from providing kosher meals for Jews alone and toward creating a common fare diet to accommodate all religious groups. Sessa said that inmates who keep kosher sometimes “manipulate the system,” asking to switch to non-kosher meals if the food is more desirable. “It gives us reason to think about what we might do differently,” he said.

The cost of kosher and halal foods led prison officials in the Indiana Department of Correction to drop their religious dietary programs altogether in 2009, serving those inmates a vegan diet instead. With budgets tight and the money spent on kosher and halal meals doubling every month, an official said the state had little choice.

“We got to the point of almost having to choose between correctional officers or special food,” said Stephen Hall, director of religious and volunteer services at the Indiana DOC.

In 2010, an Indiana court mandated the DOC to reinstate its religious food program when a Jewish inmate sued. But last year, the American Civil Liberties Union said that the DOC was in contempt of court because it administered a kosher diet to only half of those inmates who identified as Jews, a charge that the DOC denied.

“The decision of the court was that if someone has a sincere religious belief, they should have a kosher diet,” said Kenneth Falk, the Indiana ACLU’s legal director.

There have also been debates about whether the kosher meals served to prisoners meet religious standards for kosher food.

In Nevada last June, a Jewish inmate named Howard Ackerman sued the Nevada Department of Corrections in a class-action lawsuit, contending that the DOC’s new ‘common fare’ menu was not actually kosher. The suit claimed, among other things, that the food was prepared on surfaces where milk and meat were mixed, and that the trays on which the food was served previously held non-kosher food. In February, a federal judge issued an injunction in the case to stop the department from serving the new food to inmates. According to Ackerman’s lawyer, Jacob Hafter, the case included about 40 to 50 Orthodox Jews, but also more than 200 other people who wanted the kosher diet.

Nevada DOC officials have said they will make sure that the common fare diet meets kosher standards.