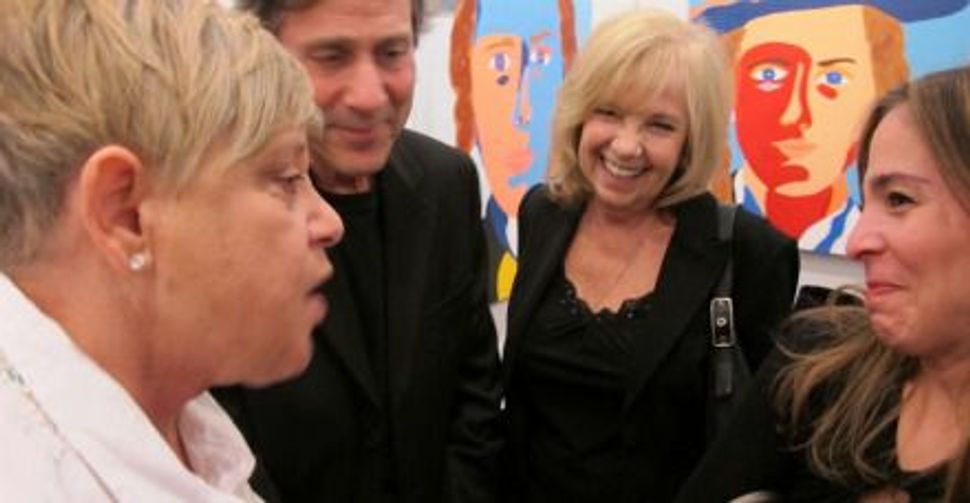 Image by courtesy of allen salkin 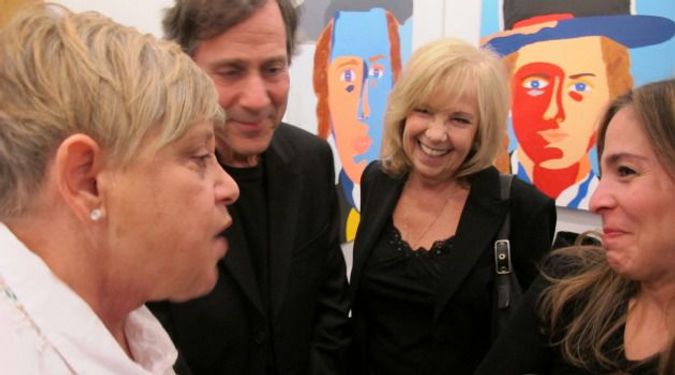 Allen Salkin rose early one recent Saturday morning, padded into the kitchen of his apartment on Manhattan’s Lower East Side and started baking. One tart tartine, two grapefruit and blueberry pies, three cherry pies and a dozen spinach pies later, Salkin flung open the door of a small gallery on the ground floor of his apartment building for the ultimate 70th birthday present to his mother, Toby Salkin: a New York art show complete with its own gala opening.

By 8 p.m., the 208 Gallery, on Forsyth Street, was full of Salkin’s friends — artists, writers, journalists, and students. His uncle, Victor Cohen from Washington, D.C., was there, as were two of his mother’s friends who flew in from Los Angeles, where Toby lives. “It makes all other Jewish children look bad,” Janis Brody, a screenplay writer, shouted above the din of voices. “My mother’s into art, and I didn’t throw her a gallery show.”

Salkin, 46, a freelance journalist and former New York Times reporter, throws a party at the end of April each year. Each party has a theme, and everyone on Salkin’s eclectic mailing list — more than 1,000 people — is invited. (Full disclosure: I was a freelance writing student of Salkin’s in 2004 and have attended almost every April party since.)

In years past, guests printed their own T-shirts at the “T-shirt Party,” wore shoulder-accentuating clothes at the “Shoulder Party” (Salkin was recovering from surgery on his right labrum at the time) and planted herbs and vegetables on Salkin’s apartment building rooftop at the “Farm Party.”

“Were you at the party at the Gramercy Park Hotel?” Salkin asked a guest, referring to the time he threw a “hotel party” by renting a suite for the night. “That was a blowout. We got in so much trouble.”

Toby began attending Salkin’s parties after her second husband, Joel Jacobson, died of leukemia in October 2004. She is no stranger to loss; both of her parents died young, she lost a sister to anorexia and a half-sister to a drug overdose.

Sitting by a tree on the sidewalk outside the gallery as Lower East Side bar hoppers walked by, Toby recounted how Salkin flew to Los Angeles when she was widowed to help put her life in order. “Allen was very much there for me when my second husband passed away,” she said.

Toby always loved to paint. But “in my era, you didn’t do that” for a career, she said. Instead, she worked as a real estate broker, returning to painting more frequently only in widowhood. “If I had to do it again, I would have stayed in the arts and not gone into real estate,” she said. “I probably wouldn’t have made as much money, but it would have been a different life.”

Today, Toby is proud that both of her children carved out creative careers. Her younger son, Doug, works in the film industry. “One of the things that is so wonderful is, they both picked something they loved,” she said before squeezing her way back inside the gala.

Salkin and his mother share the same birthday, April 2. Apparently, they share the same idiosyncratic personality, too. “To be quite frank, it took me maybe a couple of weeks to get used to Allen,” said Gillian Grogan, a 23-year-old student who was sitting outside with a couple of friends. “But once I did, I am one of his biggest fans.”

“Toby’s off the wall,” said Andrea Raft, one of her Los Angeles friends. Raft motioned to the artwork around the room, painted in vivid reds and yellows and blues. “Look at her art,” Raft said. “It’s very unique.”

The majority of the paintings were portraits: There were two Hasidic men, the Cowboy from the Village People (a guest at one of Salkin’s earlier parties) and a younger version of Allen, with long hair and his head thrown back, that looked a little like Jean-Michel Basquiat.

“The image is grotesque, yet I can’t take my eyes off of it, because it captures the essential madness of Allen Salkin through the prism of maternal acceptance,” Salkin’s friend Gersh Kuntzman said.

“I talk in full quotes,” added Kuntzman, who is an adjunct professor at the CUNY Graduate School of Journalism and the editor of a hyperlocal website, The Local.

It was perhaps inevitable that at a party full of writers, several tips would be offered for how to approach this story. “I would not lead anecdotally,” Kuntzman advised. “I would go mother-son relationship.”

Salkin advocated a different approach. “It should be a first-person piece,” he said. “Almost a circular thing about your time in New York.”

“Use the skills I taught you,” he added.

But Salkin had bigger concerns that night than how to frame a story.

“It’s funny because when I have a party, I usually end up with five times more wine than I started with,” Salkin said. “But because it’s a gallery show, people didn’t bring wine, and so I had to make two runs [to buy more] already.”

“I made pie,” he added, before disappearing into the crowd. “You would think that would be enough.”

Paul Berger is a staff writer at the Forward.