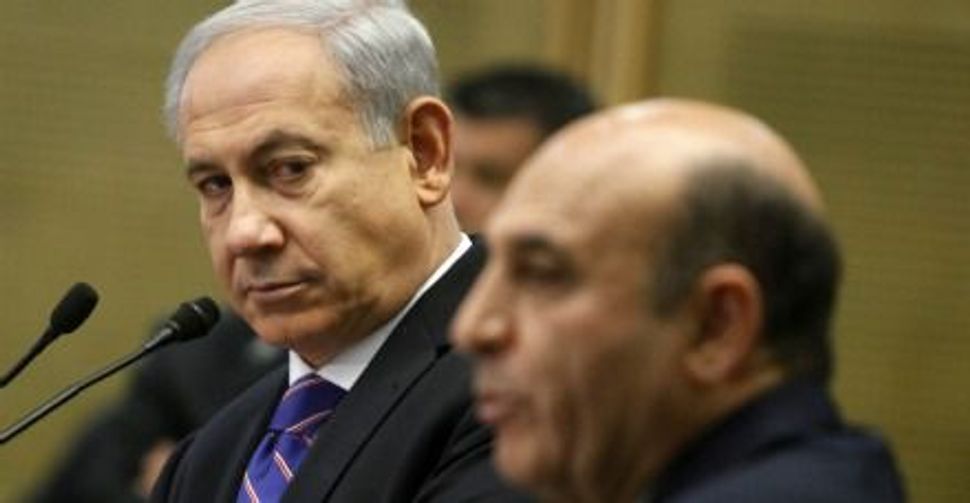 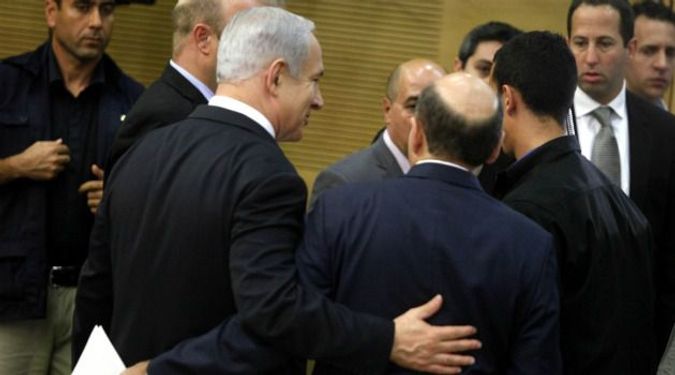 Happy Partners: Benjamin Netanyahu and Shaul Mofaz seem happy about their new coalition deal. But some Israelis worry that the new government has little incentive to be accountable to anyone except itself. Image by getty images

In Israel, some say a new phase of stability has begun. To others, what lies ahead is an era of unaccountability.

Prime Minister Benjamin Netanyahu’s bombshell of a governing deal with Israel’s major opposition party leaves the government with no other faction in parliament of significant size opposed to it. After Netanyahu consummated his coalition agreement with the Kadima party on May 8, in the dead of night, he coolly canceled the early election that he had called for the coming September just a few hours earlier.

As a consequence of Netanyahu’s grand bargain, a historic 94 of the Knesset’s 120 seats will be in the hands of the now expanded governing coalition. The remaining 26 are split up among a variety of tiny factions, including the once-mighty Labor Party, which through factional splits and loss of voter support, now holds just eight Knesset seats.

“When you have a coalition vote of almost 100, on the face of it, it reminds me of a kind of dictatorship,” Zahava Gal-On, leader of the left-wing Meretz party, told the Forward. The defection of Kadima’s 28 Knesset seats to the government’s side, she said, “affects the ability of the opposition to be critical of the government.”

Ben Gurion University political scientist Dani Filc predicted that the radical shrinking of the opposition will be felt most powerfully in Knesset committees, where a large amount of the chamber’s business is conducted. Representation in these committees is assigned in proportion to party strength.

“In practical terms the government will have complete control over every parliamentary committee, and this means that any role left for the opposition, which was already weak in this Knesset, will be a renunciation role — like the prophets of the past saying, ‘This is not good.’”

Stav Shaffir, a leader of the social protests that rocked Israel’s streets last summer, convened 2,000 people in three locations to demonstrate against the unity government on May 8. She told the Forward she fears that the now tiny parliamentary opposition will cause an intensification of what she calls undemocratic legislation. Citing the so-called Boycott Law, which penalizes individuals who voice support for campaigns to boycott West Bank settlement businesses and some other controversial legislation, she said: “Even before the unity deal shrunk the opposition there were lots of anti-democratic moves, and now it will be easier for the government to push even more.”

Shaffir worried in particular that the government will use its strength to ramp up what is widely seen as its attempt to weaken the power of the Supreme Court.

Last summer’s protests mobilized hundreds of thousands of Israelis, and at their height polls indicated that 87% of citizens supported them. In the new reality, Shaffir claimed, the government has a carte blanche to ignore this public pressure. “To not have an opposition in a place where the feeling on the streets is so against the social policy that everyone expects the unity government to adopt is terrible,” she said. Her movement is now “probably the only opposition,” she claimed.

Israel does have several precedents for its new political arrangement. Most were emergency unity coalitions during wartime. But in 1984, Likud and Labor, under Yitzhak Shamir and Shimon Peres, respectively, formed a peacetime governing majority even larger than the one Netanyahu now commands: 97 seats out of 120.

Contrary to the fears of policy paralysis voiced at the time, the government was able to tame inflation then running at some 400%. During his stint as foreign minister, Peres also secretly negotiated the outline of a peace agreement with Jordan’s King Hussein that would have seen Israel make substantial territorial concessions on the West Bank to Jordan. But Shamir, then prime minister, quashed this plan.

This experience has led some to argue, contrary to Shaffir’s concerns, that in a parliamentary system like Israel’s, it is only within the government that opposition voices have any hope of having influence.

Abraham Diskin, a professor of politics at the Hebrew University, termed fears for democratic debate under the new political arrangement “nonsense.”

In its 64 years Israel has had five unity governments, he said, and only two completed their terms. Coalition partners “were strong enough not only to criticize them but also to close them down” he said, arguing that this proves they do constitute strong internal opposition.

Diskin expects things will be no different this time. Citing the clashing agendas of parties in the current government, such as the ultra-Orthodox Shas and the predominantly secular Yisrael Beiteinu, he expects “serious tensions in the coalition.” But he conceded that Kadima’s membership was likely to weaken the social struggle, as Shaffir fears. He predicted that Kadima will back Likud in reducing social spending in the 2013 budget.

Those left out in the parliamentary cold by the deal between Netanyahu and Kadima leader Shaul Mofaz are a motley collection of small factions with no evident connective tissue that would enable them to play a coherent opposition role even at their reduced level of representation. Aside from Labor with its eight seats and the dovish party Meretz with three, there is the far-right National Union (four seats), which has a strong Kahanist contingency, and the far-left Jewish-Arab Hadash (four seats). The remaining four seats are held by two Arab parties.

Prior to his deal with Netanyahu, Mofaz voiced opposition to a unilateral attack on Iran without U.S. support — a move long threatened by Netanyahu as a means of stopping Iran’s nuclear program. Mofaz has also proposed establishing a Palestinian state quickly with provisional borders to be followed immediately by final status talks with the Palestinians for establishing more generous final borders. He has advocated that those final borders be based on Israel pre-1967 boundaries, with minor adjustments and land swaps.

At their joint press conference on May 8 announcing their agreement, neither of the two men referred to a possible bombing of Iran as part of their deal, but some of their associates have.

“When a decision is taken to attack or not, it is better to have a broad political front that unites the public,” environment minister Gilad Erdan of Likud told Israel Radio.

To critics of the unity deal, the fact that big decisions loom on Iran only increases the need for effective opposition. Meretz’s Gal-On deemed it “shameful that people elected on being a strict opposition and rallying for integrity are the people trading these principles when surveys give a low showing for the party.”

Arye Carmon, president of the Israel Democracy Institute, said that the unity deal has caused a rift between the public and the political system after the two largest parties said one thing and did another — Likud by calling and then canceling elections, and Kadima by joining the coalition it had earlier promised to shun. “Obviously it smells very bad — a major victim of the trust is civil society,” Carmon said.

But he added, “I don’t think that the issue of checks and balances lacking is a major one.”