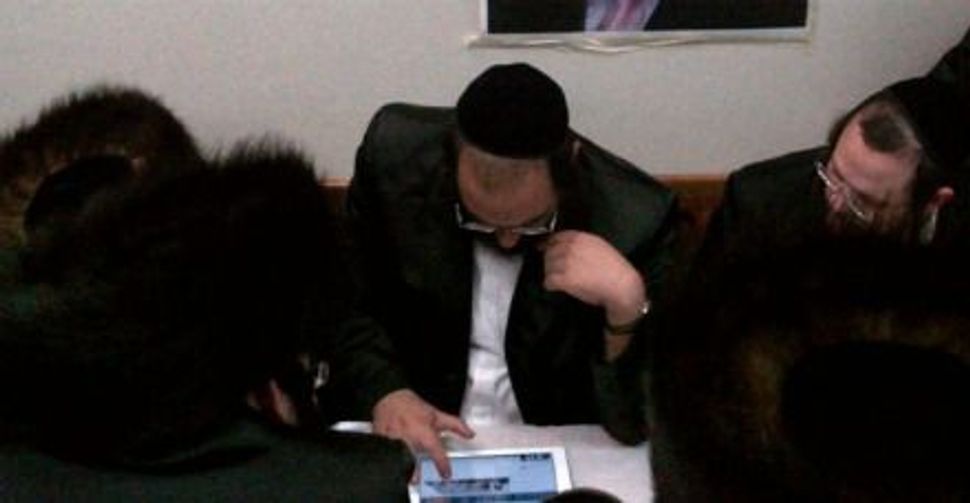 Image by courtesy of justiceforshoom.com 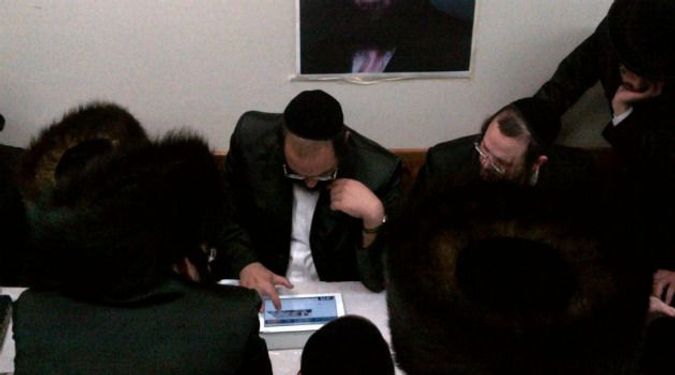 Web-Savvy: Even as they campaign against some aspects of the internet, ultra-Orthodox Jews are using social media and the web to get their message out. Image by courtesy of justiceforshoom.com

An upcoming ultra-Orthodox mega-rally in New York about the dangers posed by the Internet has a promotional Twitter account.

The event’s box office has an email address. Speeches will be live streamed. And one of the event’s organizers owns a Web marketing company specializing in search engine optimization.

This isn’t your average anti-Internet demonstration.

After years of oft-flouted rabbinic bans on Internet use, a group of both Hasidic and non-Hasidic rabbis is pushing a new approach that will be unveiled at the Mets’ CitiField on May 20. Organizers project an attendance of some 40,000 Orthodox Jewish men; women were not invited.

Without letting up on their severe condemnation of technology and the Internet, the rabbis behind the CitiField event are accepting the Web’s inevitability while instructing their followers to use Internet-filtering technology.

“No one here is a Luddite who denies the manifold benefits that technology has brought to mankind as a whole,” said Eytan Kobre, spokesman for the event. “But at a certain point, a mature, thinking individual stops and says, ‘I’ve got to make a… cost-benefit analysis… [of] what ways it is enriching my life, [and] in what ways it is undermining it.’”

The event will open with a Kosher Tech Expo featuring Web filtering technology. Despite this new openness, the rabbis involved insist they still oppose the Internet.

“The purpose of the [gathering] is for people to realize how terrible the Internet is and, of course, the best thing for every [good Jew] is not to allow it in his home at all,”[ Rabbi Matisyahu Salomon told the Brooklyn Orthodox daily Hamodia. Salomon, spiritual guide of Beth Medrash Govoha, a large and prominent ultra-Orthodox yeshiva in Lakewood, N.J., is one of the lead sponsors of the CitiField rally. Internet without a filter, he told the paper, is “treif gamur,” or completely unkosher.

Ultra-Orthodox bans on Web use date back at least a dozen years. Orthodox religious leaders worry about the easy availability of pornography online, the viewing of which violates communal modesty standards. Some also object to Orthodox-run blogs and news sites that often offer critical perspectives on communal leadership.

The outright bans, however, appear to be failing. Ultra-Orthodox men fiddle with smart phones on New York City subways. Twitter use is not uncommon among young Satmar Hasidim in Brooklyn’s Williamsburg neighborhood. Home Internet access is said to be widespread even in upstate New York’s strictly observant Hasidic community Kiryas Joel.

Compounding these challenges to rabbinic Internet bans are the employment opportunities for ultra-Orthodox in high-tech. Technical jobs don’t necessarily require a high school or college degree, which is a plus in Orthodox communities where men often forgo secular studies, according to David M. Pollock, an official with the Jewish Community Relations Council of New York who has worked to place Orthodox Jews from Brooklyn in tech jobs.

At the annual convention of the ultra-Orthodox umbrella group Agudath Israel of America last November, speaker after speaker warned of the danger of technology and the Internet, according to a member of the Orthodox community who attended the event. Jaws dropped when, during a keynote speech, a respected ultra-Orthodox rabbi pulled out his smart phone to read from an email. “Sorry, gentlemen,” the rabbi said, according to the attendee. “Yes, a BlackBerry.”

The May rally is an effort to reconcile the fact of Orthodox Internet usage with the thinking behind the rabbis’ bans.

“It’s about embracing the good that exists in the technological, the brave new technological world that we have, but being not at all naive and being extremely keen to the overwhelming challenge that it presents to all of us,” Kobre said.

Convened by a newly formed rabbinical group called Ichud HaKehillos LeTohar HaMachane, or the Unification of the Communities for the Purification of the Camp, the rally lacks the institutional backing of Agudath Israel, long the central address for joint efforts between Hasidic and non-Hasidic Jews. Ichud’s organizational sponsor is a little-known 4-year-old Lakewood not-for-profit, the Technology Awareness Group, which provides Orthodox Jews with information about Web filtering technology.

On May 20, the Expo featuring filtering software will be followed by a series of addresses by Orthodox rabbis.

“We’re not looking to lock people down,” Kobre said of the filtering software. “We’re reaching out to mature individuals, people who are sincerely religious individuals… that understand what [the Internet] is doing to us and want to respond to it.”

Press reports have pegged the amount raised for the rally at $1.5 million. Kobre could not comment on the figure and CitiField officials did not respond to an inquiry about stadium rental rates.

Kobre said that the efforts to minimize Internet use and employ filters have parallels in the largely successful efforts to ban televisions in Orthodox communities. Televisions were widespread in ultra-Orthodox homes in the 1960s and ’70s, he said. “There was sea change over the decades,” Kobre explained. While he grew up in a home that had a television, few right-wing Orthodox homes have them now. “There is an understanding that television is largely detrimental to our spiritual health,” he said.

The Internet rally’s chief rabbinic backers are Salomon, who is a widely known British-born non-Hasidic rabbi, and Rabbi Yisroel Avrohom Portugal, 87, who leads the Skulen Hasidic sect in Brooklyn’s Boro Park. Others who have signed letters in support of the rally include the heads of prominent American yeshivas and representatives of major Hasidic sects.

Despite their approval of filtered Internet when absolutely required, the rabbis behind the event describe the danger of technology in the starkest terms. In an interview that ran on the front page of Hamodia, Salomon said that the Internet and modern technology had dragged down the Jewish people to their lowest level since the destruction of the Second Temple in Jerusalem, in 70 C.E.

At a public event last September, the Skulener rebbe put the danger in more poetic terms, according to an earlier Hamodia report. “A fire is burning, but not of flames,” he warned. “It is a fire of poison from the yetzer hara,” the evil inclination, “that is burning the soul, the likes of which has never been seen.”

Orthodox groups have made intensive efforts to meet the event’s projected attendance of 40,000. Ichud ran a full-page advertisement in Hamodia on April 25, signed by rabbis from Montreal and Los Angeles, among other cities. The ad called on Orthodox Jews from outside the New York area to come to the gathering. And though children are banned from the event, Orthodox yeshivas in Brooklyn and elsewhere are asking parents to attend. One letter posted online, sent to parents of students at the Bnos Leah Prospect Park Yeshiva, a Brooklyn girls school, appeared to require that parents go to the CitiField event. “We therefore demand that each and every parent attend this special gathering,” the letter stated in underlined text.

A Twitter feed promoting the event that appeared to be associated with its sponsors went abruptly silent in April. The last post announced that rabbis had asked that it no longer post updates on the social networking site.

Not all Orthodox leaders back the rabbis’ effort to push Internet filters. The camp of Rabbi Aaron Teitelbaum, one of the two claimants to leadership of the large Satmar Hasidic sect, will reportedly boycott the gathering. Teitelbaum’s group objects to allowing Internet access at home at all, even with filters. The Satmar also generally refuse to attend religious gatherings conducted even partially in English.

Meanwhile, Zalman Teitelbaum, Aaron Teitelbaum’s brother and rival claimant, has extended his measured support for the gathering. Insiders suspect that he’s done so at least partially to distance himself from his brother.

Orthodox blogs have also traded polemics and contested reports on why the Lubavitch Hasidic community was not initially invited to the gathering. The Lubavitch operate [a robust network of websites][6] geared toward outreach to non-Orthodox Jews. Lubavitch-linked blogs reported on May 8 that the community was ultimately invited following a meeting between Portugal and three Lubavitch leaders.

Controversy has also surrounded the organizers’ decision to bar women from attending the CitiField event. Kobre attributed the decision to logistical issues, presumably relating to the difficulty of erecting a divider between men’s and women’s sections in a stadium.

In a front-page April 30 story in Hamodia asking why women would not be allowed to attend the event, organizer Lazer Paskes noted that the event would be live streamed to specific locations in Jewish communities where women could gather to watch. “Being able to participate locally will also make it much easier on the mothers who will be hesitant to leave their children for more than absolutely necessary,” said Paskes, who runs a Web marketing firm called Optimal Targeting.