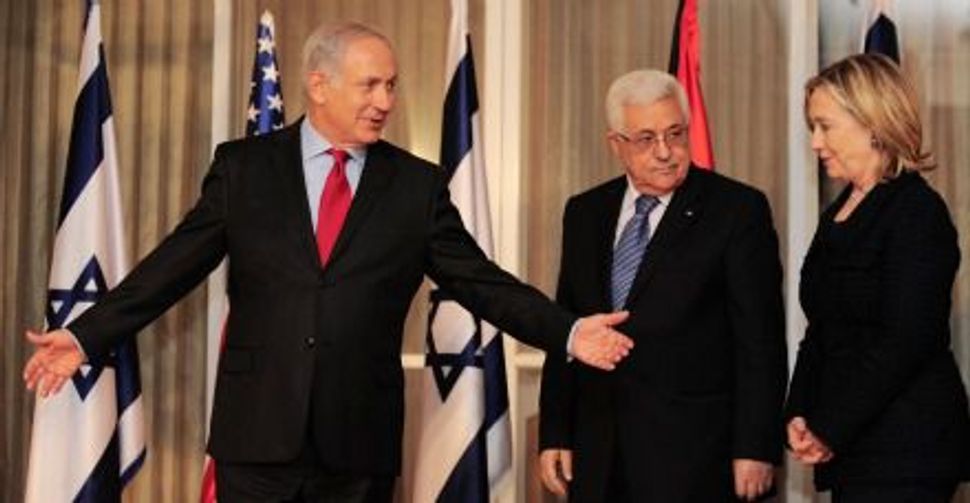 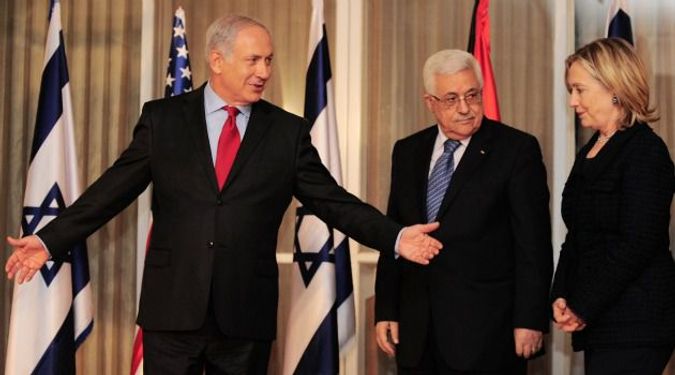 No Easy Way Forward: Israeli and Palestinian leaders have been unable to make progress towards peace in years. Is it time to toss aside the two-state paradigm in favor of some other formula for future coexistence? Image by getty images

Once seen as heresy, proposals for bypassing the Middle East peace process — or even jettisoning a two-state solution to the Israeli-Palestinian conflict — are increasingly making their way into mainstream discourse while the peace process itself remains mired in a deep freeze.

The spectrum of ideas now being voiced in prominent and respected political quarters range from unilateral steps to be taken by either side, to abandoning the two-decades-old peace process altogether.

Many of these concepts have been around for years. But the long impasse in the peace process and lack of real negotiations is moving them slowly but steadily into the arena where mainstream activists and prominent politicians conduct their debates.

“These are cries of desperation by people who really want peace,” said Robert Danin, who headed the Jerusalem office of the Middle East Quartet, a multinational group tasked with keeping the peace process alive. Now a senior fellow at the Council on Foreign Relations, Danin believes that those calling for drastic measures need to be patient. “Even if the status quo is flawed, it doesn’t mean we just need to do something,” he said.

But for some, the nonexistent peace talks — long suspended over conflicting Israeli and Palestinian demands and preconditions — underscore the notion that the time is now ripe for bolder actions beyond just tweaking the existing process, which dates back to the 1993 Oslo Peace Accords.

“By maintaining what everyone sees as a failed process, we will only increase the conviction that it is futile,” said Robert Malley, program director for Middle East and North Africa at the widely respected International Crisis Group. Malley, who was a special assistant to President Clinton on Arab-Israeli affairs, sees a “groundswell of voices that say we need to change strategy.”

A member of the Clinton peace team at the failed 2000 Camp David summit between Israel and the Palestinians, Malley is co-author of a high-profile ICG report, released May 7, that attempts to address what he sees as a “collective addiction” to a peace process that has failed in its actual mission of bringing about peace.

In its detailed research paper, the ICG, which counts Israeli President Shimon Peres among its senior advisers, critiques the Middle East peace process more aggressively than any mainstream institution in recent memory. “The peace process has become low-intensity management of the conflict masquerading as the only path to a solution,” the report states.

Among other options, the ICG proposes a new, broader approach that would incorporate key elements left out of the current process. Instead of focusing solely on establishing two states to address the problem of Israel’s occupation of the West Bank and Gaza following the 1967 Six Day War, the report suggests putting on the table Arab acceptance of Israel as a Jewish state, as Israel’s current government demands, and resolution of the Palestinian refugee issue, a key Palestinian concern.

In line with this, the ICG report calls for reaching beyond the peace process’s longtime constituencies to draw in nationalist Orthodox Israeli settlers and members of the Palestinian refugee diaspora.

The ICG report also urges the Palestinians to consider the pros and cons of adopting strategies beyond diplomacy within the Oslo framework; among these, popular non-violent resistance and application for admission to international bodies.

The paper pointedly suggests expanding the peace process’s sponsors beyond the so-called Quartet — consisting of the United States, Russia, the United Nations and the European Union — which the international community has tasked with moving the two sides towards a final resolution of their conflict.

“Can it be done? I don’t know,” Malley told the Forward in a May 11 interview. “A lot will depend on whether we can break with the current model.”

Yet another challenge has been mounted by a group of former senior Israeli officers and diplomats whose organization, Blue White Future, advocates “constructive unilateralism” as a temporary substitute for the peace process. The group’s central proposal is a series of measured Israeli steps to ease the pressure on Palestinians in the West Bank and help settlers voluntarily relocate to Israel proper. The suggested steps include a temporary border to be set by Israel that will allow the establishment of a Palestinian state with provisional boundaries, pending ultimate resolution of the border question in final-status talks.

All of Blue White Future’s proposals include at least a temporary bypass of the negotiation track and do not require talks between the sides, which so far have yielded no results.

“Frustration is not a work plan,” said Ami Ayalon, one of the group’s founders, in a telephone interview. Ayalon, a former head of Israel’s Shin Bet, the country’s domestic security service, and ex-commander in chief of Israel’s navy, said that Washington, Jerusalem and the Palestinians are “locked in an unrealistic paradigm,” referring to the current peace process. He is scheduled to present his ideas in Washington on May 17.

But so far, the Obama administration shows no signs of giving up on the peace process paradigm. “The U.S. still believes this issue has a lot of resonance in the Arab world,” said David Makovsky, director of the Project on the Middle East Peace Process at the Washington Institute for Near East Policy. He argued that the lack of movement on the peace process should be seen as an election-related hiatus that could end in 2013.

“This is more of an intermission than the end of the play,” Makovsky said.

Danin said that even in its current state, the peace process has its advantages: “It could have been much worse, and one of the reasons it’s not much worse is that there is maintenance, that we are doing damage limitation.”

For all their heterodoxy, most of these new approaches still focus on ultimately achieving a two-state solution. But in Republican circles, some are now advocating one state from the Mediterranean to the Jordan River. Illinois Republican Rep. Joe Walsh, a prominent congressional leader of the conservative Tea Party movement, recently called for abandoning what he referred to as a “myth” of two states. Instead he suggested one state, which will be under Israeli sovereignty. Walsh blamed the Palestinians for the failure to obtain two states after almost 20 years of diplomacy.

The Palestinians “will trade their two corrupt and inept governments and societies [in the West Bank and Gaza] for a stable, free and prosperous one,” he said. The Republican National Committee and the Republican dominated Florida state House of Representatives have approved nonbinding resolutions supporting this goal, as well.

Ahmed Qureia, a senior official of the Palestinian Authority who has long been deeply involved in the Oslo process, has also recently spoken out in favor of moving toward a one-state solution — albeit not a Jewish one. Given the lack of results via the peace process, he said in an interview with the British paper the Guardian in April , Palestinians should consider a one-state solution “despite the endless problems it embraces.”

“A one-state solution is not a solution, and neither is dissolving the Palestinian Authority,” Danin responded. “There are no shortcuts.”