Packing the Ballpark To Rail Against Web’s Dangers 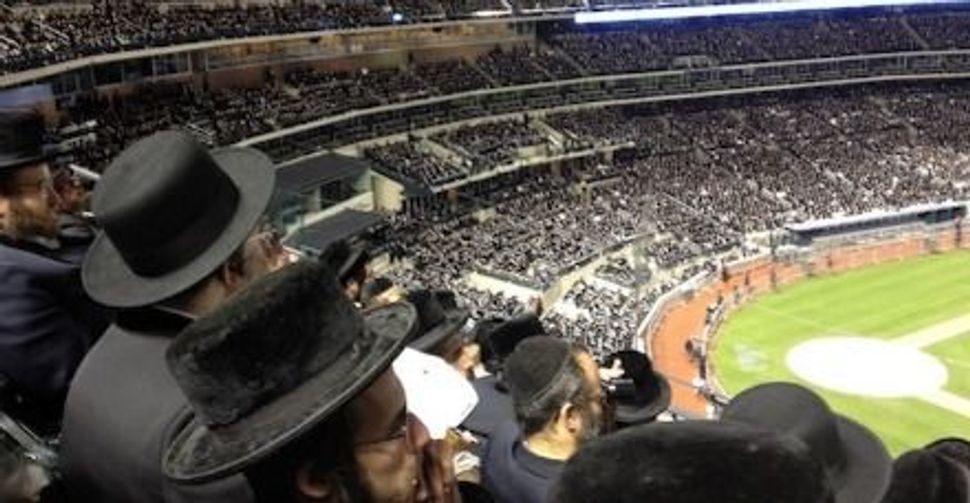 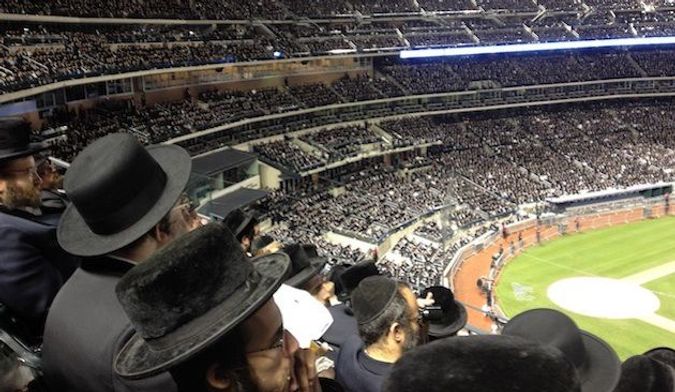 ?Take Me Out?: Some 40,000 ultra-Orthodox men packed a New York ballpark May 20. But there was no baseball game to be seen. Image by josh nathan-kazis

Ultra-Orthodox Jewish men numbering 40,000 packed New York’s Citi Field May 20 for a fiery and sometimes tearful rally about the dangers of the Internet.

As bewildered-looking stadium staff looked on, oceans of men in black hats filled nearly every seat in the Queens, N.Y., baseball stadium to hear a series of polemics against the use of the web.

Rabbis cast the Internet as a threat to children and to ultra-Orthodoxy as a whole.

“[The people Israel] has arisen like a lioness protecting her cubs,” said Rabbi Ephraim Wachsman, a well-known Orthodox lecturer.

The Internet, Wachsman said, is “changing who we are…You can see it in the ebbing eyes of the younger generation, of the jittery inattentiveness of our children, in the flippant and callous language and attitude, the cynicism … the unbelievable breaches of [modesty],” in Orthodox communities.

Vigilance is required even among adults, other speakers said. “There is not sufficient integrity among the generation today for people to be able to sit in front of a screen with the Internet, and to be able to decide what is acceptable and what is not,” said Rabbi Yechiel Meir Katz, known as the Dziboi rebbe.

Organized by a newly formed organization called the Ichud HaKehillos LeTohar HaMachane, or the Unification of the Communities for the Purification of the Camp, the men-only rally was attended by both Hasidic and non-Hasidic ultra-Orthodox Jews. Live feeds of the event were broadcast to women’s-only venues in some Orthodox neighborhoods.

The evening had some of the trappings of a regular night at the ballpark. Roving cameras put cute kids in the stands up on the JumboTron; lines for the men’s’ room were exceptionally long, and airplanes taking off from La Guardia periodically drowned out all other sounds.

But many of these men had never been to a ball field before. Some said they didn’t even know how baseball was played.

They weren’t going to learn the game that night. The Mets were in Pittsburgh, and the baseball field was empty. Tables for the presiding rabbis were set up behind the center field wall, just in front of the iconic apple that rises each time the Mets hit a homerun game.

The sheer volume of ultra-Orthodox people in the stadium was hard to fathom, even for some of the participants. “I didn’t expect such a crowd,” said Michael Eframowitz, 18, a member of the Skver Hasidic sect. Eframowitz had come with a pack of yeshiva classmates from the Skver yeshiva in the Hasidic enclave of New Square, in upstate New York. Another New Square resident said hardly any men were left in town. Women in New Square don’t drive, so the streets of the community had been taken over by kids on bikes.

Despite the rabbis’ inveighing against technology, many of those in attendance carried Blackberrys, iPhones and digital cameras. At the Carroll Street subway stop in Brooklyn two hours before the event’s scheduled 7 p.m. start, a dozen men in black hats gathered discussed the directions they had found on the online map site HopStop.

Organizers attempted to bar press access to the stadium. Lazer Paskes, one of the events’ lead spokesman, told reporters assembled outside the gates of Citi Field that they would not be allowed inside. He blamed the decision on “Homeland Security,” saying that the federal agency had determined that press could not attend. When asked to explain why a federal agency would have deemed the press a security risk, Paskes declined to elaborate.

The speakers, however, were well aware of the general interest in the gathering, which received coverage in local and national press outlets in the days leading up to the event. Wachsman criticized the Internet in terms familiar to the non-Orthodox world. “The Internet is about the moment, it’s about the instantaneous, about the artificial, the superficial, it’s about if you’re bored you click on to something else, its about being fleeting and empty,” he said.

Some speeches were delivered in Yiddish, others in English. Subtitles were provided for most of the addresses.

While most speakers seemed to accept that some use of filtered Internet connection was unavoidable, at least one of the rabbis described even Internet used only for business as a danger. Rabbi Don Segal, who cried while addressing the crowd in Yiddish, told a story about an Israeli ultra-Orthodox man who had been forced to use the web to make a living. The man “became completely spoiled,” Segal related. “This device destroyed his yiddishkeit,” or his Jewishness.

Perhaps the evening’s most heated rhetoric came from the Rabbi Yisroel Avrohom Portugal, known as the Skulen rebbe, who had been one of the conveners of the evening. The very elderly Portugal spoke in halting Yiddish with the help of another man. “This is a battle being waged against dark negative forces,” Portugal said. God “will help us wage this war against those negative forces. “

In a gesture that underlined the event’s significance in the eyes of its organizers, a rabbi closed the proceedings by leading the huge crowd in the Sh’ma prayer in the manner sung at the close of Yom Kippur. Lines normally read silently chanted out loud repeatedly by the congregation and the leader.

Packing the Ballpark To Rail Against Web’s Dangers