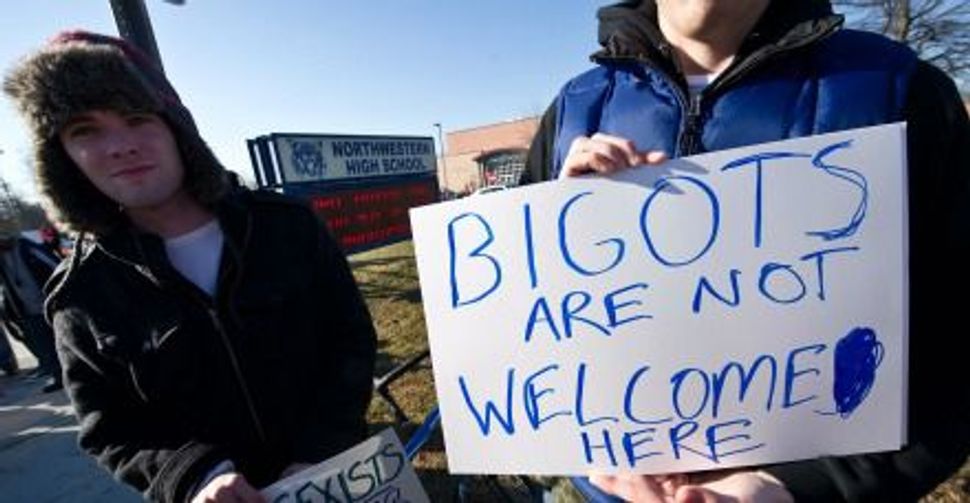 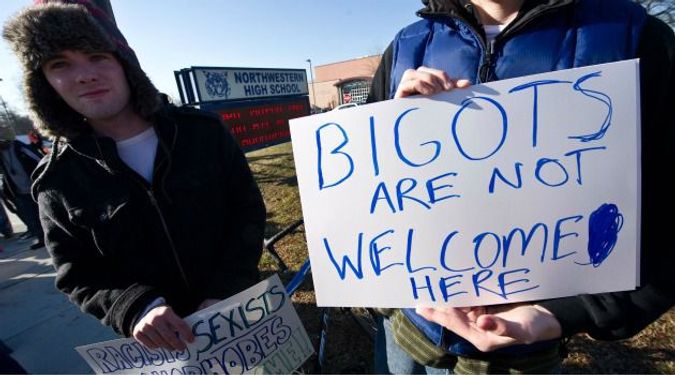 Free Speech Goes to School: Anti-gay religious demonstrators rally outside a school, prompting outrage in response. When does free speech cross the line into harassment or even bullying? Image by getty images

Wearing a T-shirt emblazoned with the slogan “Homosexuality is shameful” could cause a public school student to be disciplined for offending classmates, federal courts have ruled.

But religious students say they should be free to express their beliefs — even if they are homophobic, racist or otherwise offensive — without being punished, especially in a public school.

Drawing the line between free speech or religious expression on the one hand and behavior that could be considered harassment or even bullying on the other is a growing problem for public schools nationwide.

The thorny dispute — one that potentially affects millions of students from coast to coast — has now drawn in two major national Jewish organizations with starkly different approaches to the matter.

A new report, co-produced by the American Jewish Committee, emphasizes the need for school officials to tread carefully when disciplining students over messages that could be considered protected speech.

The Anti-Defamation League countered by slamming the AJC report, noting that schools should first and foremost focus on preventing bullying, which it says almost always involves physical or verbal targeting of vulnerable students.

The 11-page AJC report, a joint project with the First Amendment Center, was released in late May with backing from religious and education groups. Notably, it lacks the endorsement of organizations representing lesbian, gay, bisexual and transgender students, who are often the targets of school bullying.

It presents a series of guidelines for elementary and secondary school leaders seeking to quash bullying while upholding free speech. The report cautions teachers against disciplining students who engage in offensive speech that conveys an idea rather than speech meant to harm. In the former case, teachers should ask students to stop the speech rather than punish them outright.

“Schools should teach students that, as a general matter, there is no right to be free of speech one does not like, whether in school or elsewhere,” it said.

For example, although courts ruled that the “Homosexuality is shameful” slogan crosses the line into harassment, others decided that a student should not be punished for a shirt proclaiming, “Be happy, not gay.”

Marc Stern, the AJC’s general counsel, said the report was not meant to provide guidance on clear-cut harassment cases.

“Words that convey ideas are one thing; words that are used as assault weapons are another,” the report said.

Stern said the report aimed to help school administrators deal with the “harder cases,” those in which students express controversial ideas — sometimes based in religious teachings — such as “Homosexuality is a sin.”

“Some people find those sorts of things offensive. Is that bullying? What can school officials do about that?” Stern asked. “The speech is presumably protected unless school officials can show that it is disruptive or that it damages or infringes on the rights of others.”

According to Stern, the AJC issued the report in order to update a 1995 statement to clarify for teachers and parents the religious rights of students in school settings.

On the topic of religious freedom, the earlier report, which was endorsed by the ADL, said that “students have the right to speak to, and attempt to persuade, their peers about religious topics just as they do with regard to political topics. But school officials should intercede to stop student religious speech if it turns into religious harassment aimed at a student or a small group of students.”

Stern said that the spate of religious freedom cases since the earlier report provided further fuel for the new guidelines. He mentioned in particular the 2006 case in which a San Diego area high school student was disciplined for wearing a shirt with the words “Homosexuality is shameful — Romans 1:27” The student wore the shirt the day after a national protest at his school for LGBT rights.

The student sued the school on free-speech grounds, but a federal judge threw out the case, saying that the student’s shirt was disruptive and offensive.

The ADL lashed out against the AJC report, calling the guidelines “ill-conceived” in a letter to Secretary of Education Arne Duncan. It suggested that the AJC’s focus on the tricky line between free speech and harassment might distract attention from the bigger problem of full-blown physical or verbal abuse.

“Bullying situations very rarely erupt as conflicts over political or religious speech,” the letter stated. “Instead, they much more often involve the intentional targeting of an individual with less physical or social standing for physical or verbal abuse.”

“It could create confusion for schools that are dealing with the serious problem of bullying,” said Deborah Lauter, the ADL’s director of civil rights. Lauter called the report “not necessary,” saying that free-speech protections were already detailed in an October 2010 letter from the Department of Education’s Office for Civil Rights on the topic of religion in public schools.

Both groups say they are engaged in the issue of bullying as part of their broader advocacy work and not out of a particular concern that Jewish students might be the victims.

According to Stern, the AJC sought the input of the Gay, Lesbian and Straight Education Network in formulating the recent guidelines. But in the end, GLSEN did not officially endorse the report.

GLSEN Executive Director Eliza Byard said the group applauds the goals of the document but did not want to endorse it, given the heated political climate around school bullying and religion. Byard mentioned failed attempts to protect religious students from anti-bullying rules in the Tennessee and Louisiana legislatures.

“What we see are some fairly fringe elements trying to misuse religion as a basis for exemption from bullying-prevention protections,” Byard said.