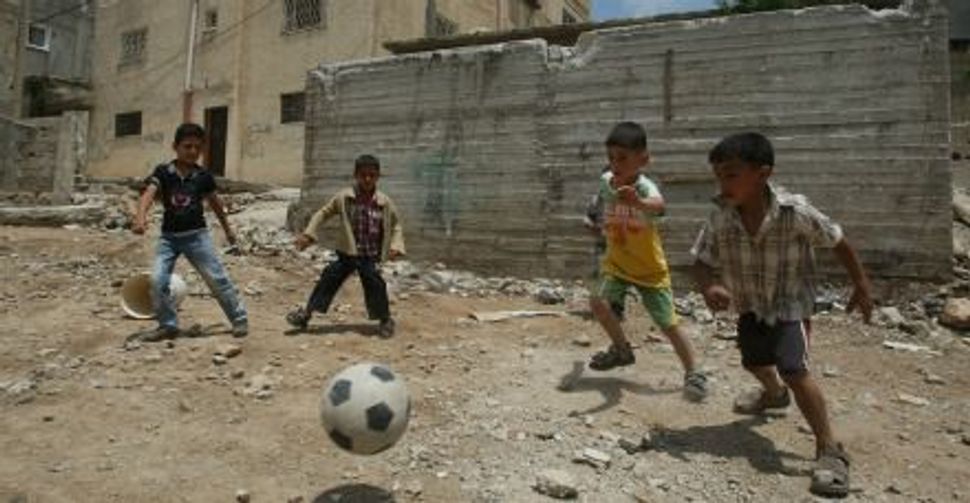 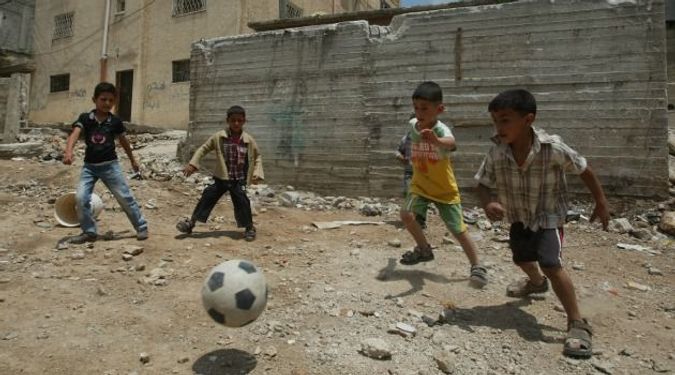 Generation After Generation: Palestinian children play in a West Bank camp. Some believe only those personally displaced in the 1948 war should be characterized as refugees, effectively excluding millions of descendents. Image by getty images

Palestinian refugees, longtime pawns in regional and international struggles, have recently become a factor in American politics, as well.

An attempt by the U.S. Senate to define who exactly can be counted as a Palestinian refugee has pitted congressional Republicans and some Israel advocates against the Obama administration. The measure, an amendment to the defense spending bill presented by Illinois Republican Senator Mark Kirk, would require the State Department to report how many of the Palestinians served by the United Nations Relief and Works Agency were personally displaced in the 1948 war. Although the version that was finally [approved}(http://www.cbsnews.com/8301-501707_162-57444219/defining-a-palestinian-refugee-a-us-complication/) was watered down significantly, both sides believe it could eventually force the United States to make a concrete determination on the number of Palestinian refugees, which now ranges from 30,000, according to the minimalist approach, to 5 million, as official U.N. numbers suggest.

Beneath the political posturing lies the core question of defining the status of Palestinian refugees. A unique set of circumstances has allowed Palestinians to pass on their refugee status generation to generation, making for a rare, albeit not unheard of, case of a refugee problem that is growing in numbers instead of shrinking.

“At the root of this story is a dividing line between European and non-European refugees,” said G. Daniel Cohen, a professor of history at Rice University who has written extensively on refugee issues. “The Palestinians,” he added, “were the first test case for this division after World War II.”

In the debate, which took center stage in May, each side clings to historical precedents supporting its claim.

For those who believe that refugee status should be given only to Palestinians who were personally displaced during the 1948 war, which led to the creation of the State of Israel, there are two key precedents: the plight of more than 12 million German refugees who were forced out of their countries of residence in postwar Europe, and the case of Indian and Pakistani refugees who were displaced following the partition of India in 1947. In both cases, refugees were resettled in their countries of residence without passing down the status to the next generations.

Pop Quiz: What do you call “descendants” of European refugees, Indian refugees, Pakistani refugees or Jewish refugees from the post-1945 or post-1948 turmoil? Answer: “Citizens of their respective lands,” Gil Troy [wrote in The Daily Beast.

“Look at American Jews,” added Asaf Romirowsky, a conservative researcher who has written extensively about the issue. “We’re all refugees.” Romirowsky is an adjunct scholar at the Foundation for Defense of Democracies and Middle East Forum, two think tanks that actively advocate for limiting the definition of Palestinian refugee status.

But historic precedents work both ways. Supporters of a broader definition point to the Tibetan population in Nepal and to the scattered Kurdish population as communities that have maintained their refugee status beyond the first generation of being displaced or deprived of their own state. “Replace the word ‘Palestinian’ with ‘Tibetan’ and see what happens,” a senior U.N. diplomat suggested. “Talk to the Dalai Lama and tell him Tibetans aren’t refugees.”

The Palestinian refugee problem dates back to the 1948 war. The creation of the State of Israel came after nearly two years of fighting between the Jewish population and the Arabs of Palestine, supported by surrounding Arab nations. According to estimates, some 650,000 to 800,000 Palestinians either fled or were forced out of their homes, never to be allowed back. Experts believe that 30,000 of those originally displaced are still alive.

Established in December 1949, the U.N. Relief and Works Agency for Palestinian Refugees was tasked with providing humanitarian assistance to refugees residing in Jordan, Lebanon, Syria, the West Bank and Gaza. It was UNRWA that, for its own operational purposes, defined who would qualify as a Palestinian refugee. According to its definition, still in use today, “Palestine refugees are persons whose normal place of residence was Palestine during the period 1 June 1946 to 15 May 1948, and who lost both home and means of livelihood as a result of the 1948 conflict. Palestine refugees, and descendants of Palestine refugee males, including legally adopted children, are eligible to register for UNRWA services.”

By including descendants of Palestinian refugees in the list, the number of refugees ballooned to 5 million and, according to estimates, could reach 11 million by 2040.

U.N. diplomats explained that this definition is used mainly for practical reasons, in order to determine who is eligible for services provided by UNRWA in its five regions of operation. The United Nations High Commissioner for Refugees, which deals with other displaced populations around the world, usually attempts to solve refugee problems by either returning refugees to their homes, absorbing them in their countries of residence or, in rare cases, resettling them in a third country. For Palestinians, the first option is impossible, since it is part of their dispute with Israel, and the second is impractical, due to resistance of the host countries that fear demographic and political destabilization if forced to absorb a large Palestinian population.

“There is a real fear, and it’s expressed in various ways,” said Paul Scham, adjunct scholar at the Middle East Institute in Washington and executive director of the University of Maryland Gildenhorn Institute for Israel Studies. In Lebanon and Syria, Palestinian refugees are kept in camps, and in Jordan they face discrimination. “There is certainly an extreme feeling in the East Bank circles that they don’t want to accept the Palestinians who live there as full citizens,” Scham said.

The debate over the count of Palestinian refugees was ignited by Kirk’s amendment to the defense spending bill, which was approved unanimously May 24. The United States provides UNRWA with $250 million in funding a year, nearly a quarter of the agency’s budget. Kirk’s original language included a demand to change American policy to recognize as refugees only the first generation of Palestinians displaced from their homes. But fierce opposition from Democrats led to a softer version requiring only an administration report on the number of refugees.

Still, the Obama administration remained adamantly opposed to Kirk’s amendment. In a letter to the Senate Committee on Appropriations, Deputy Secretary of State Thomas Nides described the proposed amendment as a posing “a serious risk” to America’s interests in the region. “It pushes the refugee issue to the fore at a particularly sensitive time,” Nides wrote. In his letter, the deputy secretary of state referred to the 5 million Palestinians receiving services from UNRWA as “refugees.”

For supporters of the Palestinian cause, the Kirk legislation is seen not only as yet another attempt to undermine UNRWA, an agency that has been in the crosshairs of congressional Republicans for years, but also as an effort to undermine any future Israeli- Palestinian peace process by predetermining the refugee question, which is one of the key issues to be discussed in a final-status solution.

“Ultimately, this is a political move,” said Leila Hilal, co-director of the Middle East Task Force at the New America Foundation. “What they really want is to pre-empt the right of return and the notion that Palestinians have any claim to their homes within Israel.”

Supporters of narrowing the definition do not dispute this view. “What Kirk is trying to say is ,‘Here is the cut-off date of the right of return,’” Romirowsky said.

But congressional action will do little to change the way refugees are viewed in any final-status arrangement. Hilal, who formerly served on the Palestinian negotiating team, said that Palestinian demands for resolving the refugee issue were never based on the definitions used by UNRWA. Rice University’s Cohen agrees. Explaining that the Palestinian concept of refugees, whether it is for the purpose of the right of return or for future reparations, does not depend on how many refugees are recognized by the U.N. agency, he adds: “You can do away with UNRWA tomorrow, but the refugee issue will not cease to exist.”