For Some, Halacha Makes Conceiving Tough 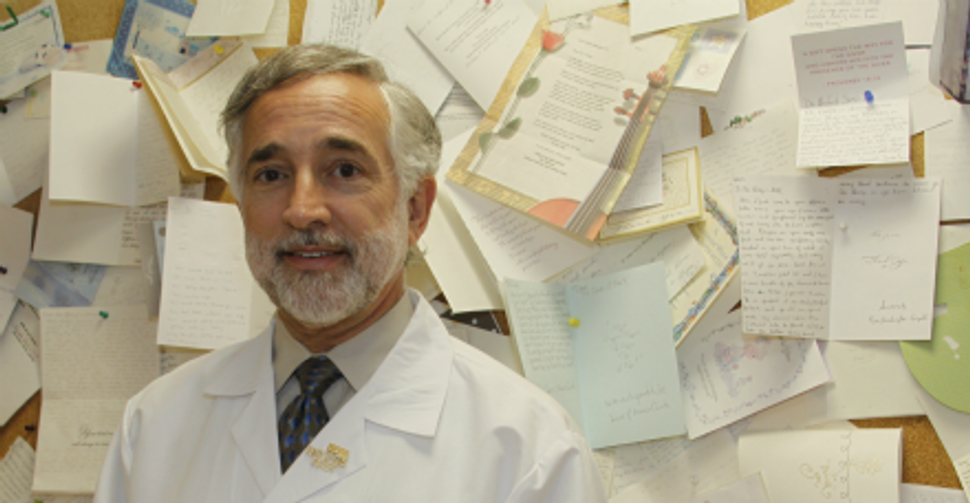 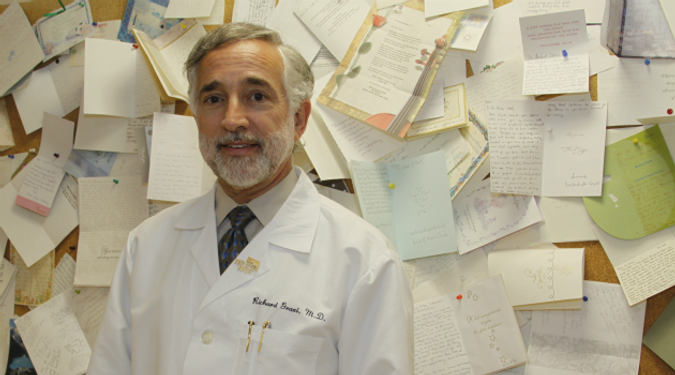 Doctor?s Orders: Dr. Richard Grazi says he has scores of testimonials from Orthodox women who suffered from ?halachic infertility.? Image by Shulamit Seidler-Feller

Rachel never had much of a problem conceiving children: one, two, three, four, five. But when it came to child No. 6, Rachel (who asked that we identify her by only a pseudonym) and her husband tried and tried. Five years passed, but no child came.

As an ultra-Orthodox woman, Rachel follows the Jewish laws of ritual purity, abstaining from sex with her husband during her menstrual period and for seven days afterward. Though Rachel was able to conceive for the first 19 years of her marriage, her menstrual cycle had shifted recently. Her fertility now peaked at a time in the month when she was forbidden from touching her husband. In other words, by following Jewish law, Rachel had rendered herself infertile.

“Halachic infertility,” as her condition is known, affects a small number of Orthodox Jewish women worldwide. According to Grazi, around 5% of his 500 Orthodox patients — about 25 women — can’t conceive because they adhere to religious law. Most halachically infertile women could easily become pregnant if they had sex with their husbands earlier in their cycle.

But for Orthodox women and their rabbis, breaking the laws of ritual purity is simply unthinkable. In Brooklyn’s Orthodox community, where having a large family is paramount, most women with the condition take low-risk hormones instead, to adjust their cycles so that they can get pregnant. Others turn to artificial insemination.

“There are some rules that are extremely strict,” said Chaim Jalas, the director of patient services at Bonei Olam, an Orthodox fertility center. “The idea here is that the halacha doesn’t change.”

Contemporary practices around Jewish ritual purity stem from the

Torah, which prohibits women from having sexual intercourse while they are menstruating, or niddah, and commands them to dunk in a ritual bath, or mikveh, before they can rejoin their husbands. In the biblical era, healthy women visited the mikveh just a few days after they stopped menstruating, while women with irregular cycles had to wait a week. Rabbis streamlined these regulations in the Talmud, decreeing that all women should wait a full seven days after they stopped bleeding to visit the mikveh. Today, Ashkenazi Orthodox women typically abstain from sex for five days while they are menstruating, plus another seven days before going to the mikveh. The 12-day rite of abstention is thought of as the foundation of family life.

The practice poses no challenge to fertility for the vast majority of Orthodox women, who ovulate about halfway through their cycle, or 14 days from when they start menstruating. Resuming sexual relations with their husbands 12 days after menstruation begins puts them in a prime position to get pregnant. In fact, ultra-Orthodox communities have extremely high fertility rates. Boro Park, the heavily Orthodox Brooklyn neighborhood in which Rachel lives, is known as the baby boom capital of New York City.

Women who are halachically infertile, on the other hand, ovulate while they are still niddah, typically sometime during the seven-day span after they stop menstruating but before they go to the mikveh. For these women, visiting the mikveh earlier would solve their problem.

But community rabbis almost never allow them to make this adjustment.

In Israel, the ban on early mikveh was the subject of intense debate six years ago, when gynecologist Daniel Rosenak called for a “rethinking” of niddah. Rosenak claimed that tens of thousands of Israeli women were rendered infertile by contemporary niddah practices. He suggested returning to the pre-talmudic standards for ritual purity, when healthy women visited the mikveh just a few days after their period ended. Niddah, he wrote in a statement to Haaretz, has produced a “conflict with the first commandment in the Torah — to be fruitful and multiply.”

But most Orthodox women in this situation say they don’t want to flout halachic norms in order to get pregnant.

“I don’t want to conceive a baby that way,” said Brany Rosen, co-founder of the infertility support group A Torah Infertility Medium of Exchange and a onetime sufferer of halachic infertility.

Rosen, a mother of six in her 40s, realized that she might be infertile when two years into her marriage she had still not conceived. Twenty years ago, infertility was a taboo subject in the Orthodox communities of Brooklyn. Local rabbis were suspicious of emerging reproductive technologies, and childless couples were left to navigate the secular world of fertility care on their own. Desperate, Rosen appealed to a rabbi for help. He sent her to a doctor in Manhattan, who referred her to a fertility specialist.

Suspecting that Rosen was ovulating while she was niddah, the specialist wrote a letter to Rosen’s rabbi, asking if Rosen could visit the mikveh early. “Why can’t your rabbi be your rabbi and let me be your doctor?” she said the specialist asked her. Skeptical about the medical approach, Rosen never delivered the letter. “It’s not going to work,” she said.

Eventually, Rosen found another doctor who had several Orthodox patients. He diagnosed her with polycystic ovary syndrome, a common endocrine disorder that, combined with her religious practice, was keeping her infertile. Rosen began taking hormones to correct the problem, and after an early-term miscarriage she became pregnant with her first son. He is now 19-years-old and studying at a yeshiva in Israel.

According to Rosen, over the past 20 years the secular and religious worlds alike have undergone a transformational shift with regard to infertility. Most doctors in the New York area are now sensitive to the laws of Jewish ritual purity. Grazi has been practicing in the frum world for 25 years. He quickly learned not to advise women to visit the mikveh early. “That is just a nonstarter,” he said. “I know where my patients and my rabbis are coming from.”

At the same time, childlessness is now openly acknowledged in Orthodox communities. Headquartered in a rose-colored office in Boro Park, Brany’s A.T.I.M.E. services some 8,000 couples struggling to get pregnant in the United States, England and Israel. Another fertility support group, Bonei Olam, is located less than a mile away. Rosen said that a key talking point in lifting the infertility taboo was to remind her clients and their families that Sarah, the Hebrew bible’s most important matriarch, was infertile for much of her life.

A.T.I.M.E. also trains rabbis in the latest reproductive technologies so that they can make informed recommendations to infertile couples about which treatments square with Halacha.

Grazi said that he typically addresses halachic infertility by directing a patient to wear an adhesive patch that delivers estradiol, the natural female sex hormone, just as she begins menstruating. This patch is meant to delay her ovulation until after she goes to the mikveh. If the patch is working but the woman is still having trouble getting pregnant, then Grazi will add one of several medications to stimulate egg development — a potent one-two punch for toppling halachic infertility.

But in the instances that the patch doesn’t delay a woman’s ovulation, Grazi will take more drastic measures, prescribing a medication called Lupron, which mutes the body’s egg development and ovulation. Then, Grazi will place a woman on a regimen of injectable natural hormones, managing her cycle so that her fertility peaks when she is allowed to have sex with her husband.

For halachically infertile couples with an aversion to using hormones, there are other options. One simple fix is to artificially inseminate the woman with her husband’s sperm before she goes to the mikveh. Since the woman is not allowed to have sex with her husband at the time that she is ovulating, insemination will bring his sperm in contact with her egg without the couple actually touching. Rabbis, however, disagree as to whether this is allowed under halachic law. Some Modern Orthodox rabbis are more lenient in their approach to insemination. But other rabbis, particularly those in ultra-Orthodox communities believe that insemination during niddah can cause spiritual harm to the child.

The sperm sample is then delivered to a fertility lab and frozen until the woman reaches peak ovulation. Then, doctors inseminate the woman with her husband’s sperm. While insemination is technically simpler, it can instigate a vexing back-and-forth among a couple, their rabbi and their doctor. For that reason, Grazi said, most women opt for hormonal treatment.

Rachel’s halachic infertility was compounded by the fact that she has fewer and poorer-quality eggs than most women her age. When she visited Grazi last November, he prescribed the estradiol patch to delay her ovulation. After three months on the patch with no results, Grazi added another medication, clomiphene, to galvanize her egg development. Still nothing.

Grazi took her off the patch and placed her on Lupron. He then added injectable synthetic hormones to stimulate her eggs.

Grazi has assured Rachel that the hormones won’t harm her, but the combination of pills, injections and the stress of infertility has taken its toll.

“I wake up in the morning feeling so, so, so terribly down,” she said. “This is not good for your system. I am faced with the question of what to do next. Do I continue this until I am 50?”

With Rachel’s body primed to get pregnant, she and her husband tried for their sixth child in early June. But again, no baby.

Grazi has advised Rachel to pause her treatments while she travels upstate for a summer vacation with her family. When the family comes back, Rachel and Grazi can re-evaluate whether she will continue trying.

For Some, Halacha Makes Conceiving Tough