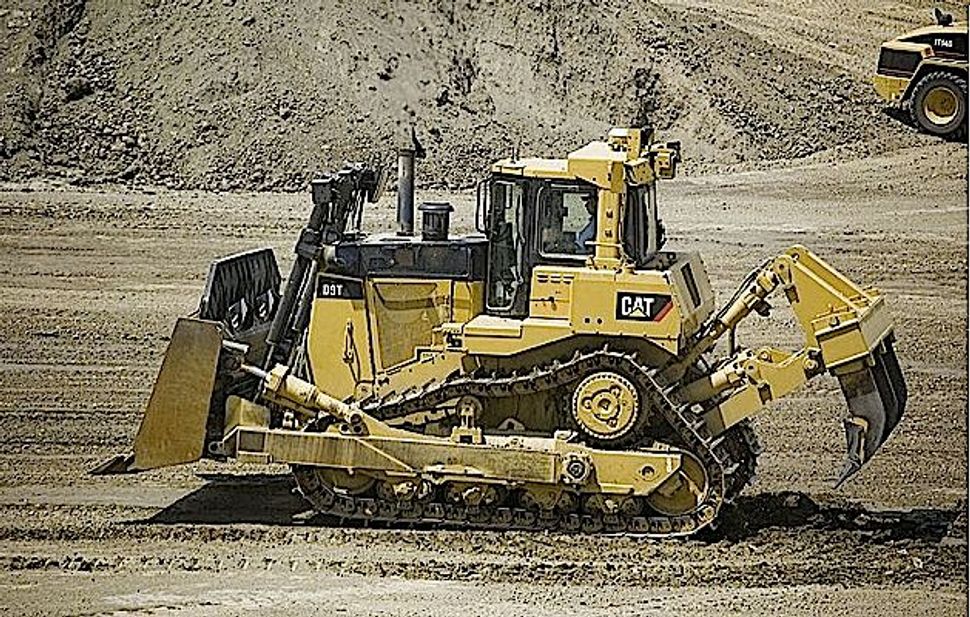 Controversy over the Israeli army’s use of Caterpillar Inc. bulldozers to demolish Palestinian homes was a “key factor” in a corporate rating agency’s decision to drop the American manufacturer from its list of socially responsible companies.

The ratings agency, MSCI, downgraded Caterpillar in February, dropping it from several indices in which it lists companies with acceptable environmental, social and governance practices. Public controversy about the move erupted last week, when supporters of the movement to boycott, divest and sanction Israel—known as BDS—highlighted pension giant TIAA-CREF’s decision to purge Caterpillar from its socially responsible investment portfolios.

The BDS supporters trumpeted the move by TIAA-CREF, one of the nation’s best-known pension firms, as a victory for their cause.

TIAA-CREF cited MSCI’s downgrading of Caterpillar as the trigger for its decision and sought to avoid taking any direct responsibility for the move.

MSCI itself was initially vague about how important the Israel-related issue was in its decision to downgrade Caterpillar. But in a statement issued June 25, MSCI made it clear that Israel was a major factor in its decision.

“The key factors determining the rating include a January 2012 labor dispute and subsequent plant closing in Canada, an on-going controversy associated with use of the company’s equipment in the occupied Palestinian territories, management of environmental issues, and employee safety,” the statement said.

“For us, this is an unequivocal victory,” said Rebecca Vilkomerson executive director of Jewish Voice for Peace.

Jewish organizations, which had at first dismissed the BDS groups’ declarations of victory as spin, voiced dismay with MSCI’s decision after MSCI issued its clarifying statement. “One would hope that the ratings company would base its rating on the companies, not the lies people tell about them,” said Ethan Felson, vice president of the Jewish Council for Public Affairs.

Kenneth Stern, the anti-Semitism expert at the American Jewish Committee said: “The BDS people try to make any investment decision into a victory.”

In annual reports to Congress, the U.S. State Department has repeatedly criticized Israel’s demolition of thousands of Palestinian homes in the occupied territories of Gaza and the West Bank, and in East Jerusaelm over many years. The demolitions have often been implemented with Caterpillar bulldozers and other heavy equipment, leading to the divestment protests against Caterpillar.

Israel has defended the demolitions as actions taken within the context of Israeli law. Many demolished homes, particularly in East Jerusalem, lack proper building permits, though the State Department reports that Israeli laws and procedures make such permits difficult for Palestinians to obtain. Homes of suicide bombers have also been demolished, although that practice has been suspended in recent years. The army sometimes demolishes homes after declaring the land on which they sit to be part of a live-fire zone.

Until recently, MSCI gave Caterpillar a “B” rating — below average, but high enough to keep it on the MSCI stock list. The February downgrade reduced Caterpillar to a rating of CCC, the threshold at which companies are removed from its index of socially responsible investments.

TIAA-CREF, the leading retirement provider for people who work in the academic, research, medical and cultural fields, serves 3.7 million active and retired employees and has $487 billion in combined assets under its management. In March, following the MSCI downgrade, the firm sold $72 million of Caterpillar stock.