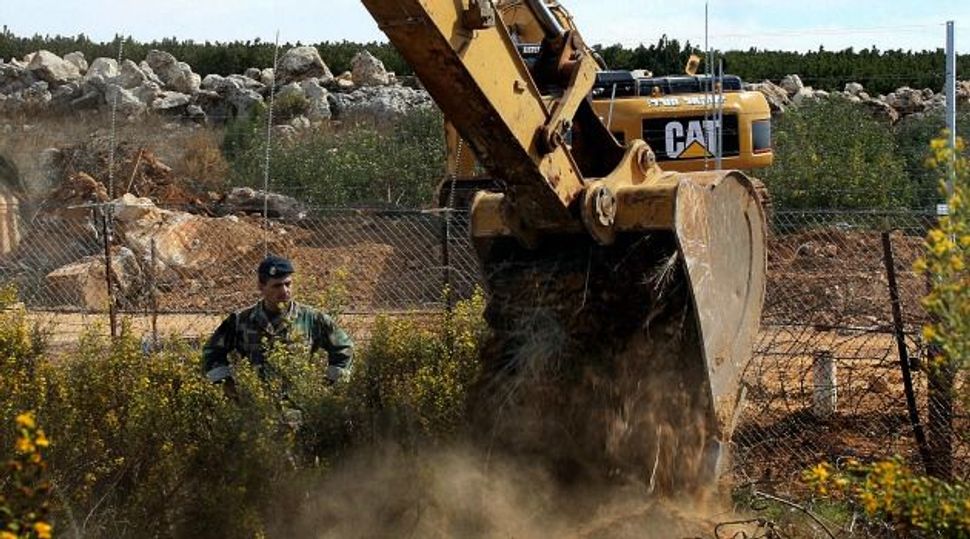 CAT Fight: The boycott Israel has won a victory over Caterpillar, which has provided bulldozers used by the Israeli military. Now it is pushing a Presbyterian group for a tougher stand. Image by getty images

The high dam mounted against the movement to boycott, divest from and sanction Israel has sprung its first significant leak ? and for opponents of the BDS movement, as it is known, the timing could not be worse.

In its general assembly, taking place between June 30 and July 7, the largest Presbyterian denomination in the United States will vote on divesting its investment portfolio of companies deemed to be supporting Israel?s policies in the occupied West Bank and Gaza, and in East Jerusalem. It?s the final showdown of a long and drawn-out process in which many Jewish groups have been involved, adamantly combating the proposed portfolio purge.

But on June 25, just as BDS opponents were gearing up for this challenge, MSCI, a financial analysis firm with more than 6,000 clients worldwide, made a startling disclosure in a public statement: Controversy over the use of Caterpillar Inc.?s bulldozers in Israel?s occupied territories had been a ?key factor? in MSCI?s March 1 decision to drop the heavy-equipment manufacturer from its index of socially responsible companies.

That MSCI move had at least one immediate practical consequence: In March, TIAA-CREF, the leading retirement assets management firm for workers in the academic, research, medical and cultural fields, quietly dropped Caterpillar from its socially responsible investment portfolios, selling off some $72 million worth of Caterpillar stock from these funds.

?I haven?t heard of other funds or companies that use the issue of Israel as a filter for investment decisions,? said David Kathman, an analyst specializing in socially responsible investments at Morningstar, a leading financial data and analysis firm. Most funds interested in social responsibility focus on good governance and avoiding investments in tobacco and alcohol industries, he noted. It is not clear how many will follow MSCI?s lead in reconsidering companies that, like Caterpillar, sell products seen as supporting Israel?s occupation, he said.

?I?m sure the BDS people will portray this as a victory, and those in the Presbyterian Church who are inclined to agree with them surely will not check to see if the evidence is credible or not,? said Kenneth Stern, a specialist on anti-Semitism and extremism at the American Jewish Committee, one of the groups fighting to counter divestment efforts.

The Presbyterian Church (USA) has been grappling with the issue of divestment for years. But a massive outreach effort by the Jewish community, and a gradual and complicated decision-making process within the denomination, managed to get the issue off the agenda or deferred to committees for further, slow-moving examination.

This year, however, the Presbyterian Church (USA) seems determined to pass a resolution divesting funds, or preventing further investments, in Caterpillar, Motorola and HP. The latter two, like Caterpillar, produce equipment used by the Israel army in the West Bank.

?We have run out of hope that these companies are willing to change their corporate practices,? said Rev. Brian Ellison, chair of the denomination?s Mission Responsibility Through Investment Committee in a February 17 statement. ?We have made diligent effort to engage in conversation. We?d like to do more, to make progress, but substantial change does not seem possible.?

If passed, a Presbyterian divestment resolution could cement the otherwise shaky BDS victory in the Caterpillar case and mark a new era for divestment efforts. ?Regardless of the outcome, there is a conversation we in the Jewish community have to hold about our relations with this church,? warned a Jewish activist involved in inter-faith relations.

Other denominations have, so far, not responded positively to BDS motions. The Methodist Church recently rejected a divestment resolution, as did the Episcopal Church. BDS supporters believe that the opening provided by the Caterpillar downgrading gives them momentum to break through some of this resistance after years of futile efforts.

?The way things are going are to our direction, not away from us,? said Rebecca Vilkomerson, executive director of the pro-BDS group Jewish Voice for Peace.

In fact, the relationship between TIAA-CREF?s purging of Caterpillar and the Israel controversy was less direct than the BDS proponents portrayed it. It was only on June 21, in a press release, that a coalition group led by JVP belatedly trumpeted TIAA-CREF?s divestment of Caterpillar in its social responsibility funds as a BDS triumph. Until then, no one seemed to notice the action taken last March. But after it was issued, everyone involved felt pressured to respond.

TIAA-CREF disavowed any motive on its part involving Israel. The assets management company explained that it simply relied on MSCI as its vendor for providing ?social screens? for these funds.

It was after TIAA-CREF?s statement that MSCI issued its own.

?The key factors determining the rating include a January 2012 labor dispute and subsequent plant closing in Canada, an ongoing controversy associated with use of the company?s equipment in the occupied Palestinian territories, management of environmental issues, and employee safety,? MSCI stated.

In annual reports to Congress, the U.S. State Department has repeatedly criticized Israel?s demolition of thousands of Palestinian homes in the occupied territories of Gaza and the West Bank and in East Jerusalem over many years. The demolitions have often been implemented with Caterpillar bulldozers and other heavy equipment, leading to the divestment protests against Caterpillar. The company?s bulldozers go to the Israeli army and are sometimes financed via sales deals through a special Pentagon program.

According to a report in the Israeli daily newspaper Haaretz, the army retrofits its version of the Caterpillar D9 bulldozer with a heavy machine gun and a bulletproof cabin, among other military modifications.

Israel has defended the demolitions implemented with the bulldozers as actions taken within the context of Israeli law. Many demolished homes, particularly in East Jerusalem, lack proper building permits, though the State Department reports that Israeli laws and procedures make such permits difficult for Palestinians to obtain. Homes of suicide bombers have also been demolished, although that practice has been suspended in recent years. The army sometimes demolishes homes after declaring the land on which they sit to be part of a live-fire zone.

Calls to divest from certain companies dealing with Israel, specifically those supplying goods to the Israeli army or doing business with West Bank settlements, date back a decade. The 2003 death of American peace activist Rachel Corrie, who was run over by a Caterpillar-made bulldozer as she was protesting a house demolition carried out by the Israel Defense Forces, focused much of the divestment efforts on the Peoria, Ill.- based heavy machinery manufacturer. The verdict in a civil lawsuit filed by the Corrie family against the State of Israel is expected to be announced on August 28.

Still, Jewish activists believe that just as in the past, calls for divestment now will not resonate with most Americans. Stern, of the AJC, said that Jewish crowds he speaks with are always surprised to hear that despite the vocal campaign, there have yet to be any universities or pension boards to join the boycott or divest from Israel.