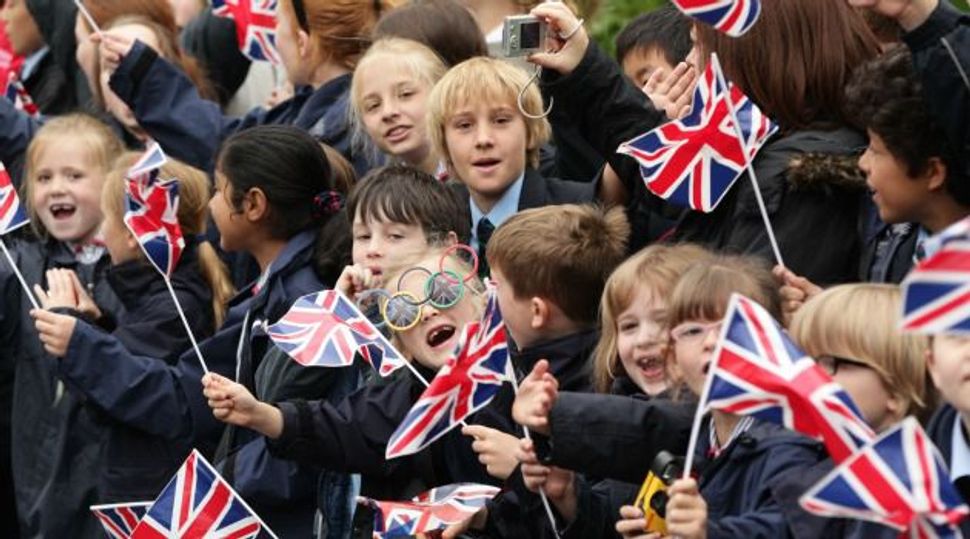 Cheers and Tears: Much of Britain is gripped by Olympics fever. For London?s Jews, the excitement is tempered by plans for memorials to honor victims of the 1972 Munich Olympics massacre. Image by Getty images

For the British Jewish community, the most memorable moment of the London Olympics may be a somber one.

On Aug. 6, several hundred people are expected to attend a commemoration for the 11 Israeli athletes and coaches murdered by Palestinian terrorists during the 1972 Munich Olympics.

“From conversations across the community, the key thing people are engaged in around the Olympics is that they want to see a commemoration of Munich,” said Peter Mason, director of the London Jewish Forum.

While a ceremony organized by the Israelis and the local community takes place during every Olympic Games, this one marks the 40th anniversary of the massacre. The International Olympics Committee continues to reject international calls for a minute of silence during the opening ceremony on July 27.

But the community also has made a point of joining the general air of celebration sweeping London in the run-up to the Games. In the past year, nearly every Jewish school, youth group and charity has run Olympics-related activities. And during the Olympics, London’s Jews will welcome thousands of Jewish visitors with social events, synagogue services, guides to Jewish London and, in the Olympic Village, pastoral care.

The welcoming efforts are being coordinated by the Jewish Committee for the London Games, which was established by the London Jewish Forum and several other community organizations.

For one of the organizations, Maccabi GB, which runs sports programming for the Jewish community, the Olympics has been “a springboard to get people involved. At every opportunity we’ve linked to the Olympics,” said project manager Jessica Overlander-Kaye.

Maccabi GB worked with more than 15 Jewish organizations on more than 30 events, ranging from talks about the roles of Jews in sport to Olympics-themed sports days in Jewish schools, and liaising with students who want to write good luck cards to the Israeli delegation. An annual community Fun Run was expanded this year to reach 2,000 people, including British Chief Rabbi Jonathan Sacks.

For Overlander-Kaye, become involved in Olympics-themed activities through Jewish groups is “about being part of something smaller and bigger at the same time. It’s an opportunity to be part of the Olympics while connecting to the Jewish community. Viewed backwards, it reflects very well on our community, on our mentality about working from the grass roots, that we encourage people to get active and engaged. We make it easy for people.”

She is particularly proud of the work that Maccabi did this year in encouraging people with disabilities to become involved in sports. In June, the group held an event that saw the able-bodied and non-able-bodied play sports together.

“We linked it to the Paralympics,” she said of the international games held for disabled athletes after each summer Olympics. “The Israeli delegation will have a strong Paralympic team, and this makes sports accessible” to disabled people.

Other groups have focused on educational events. For example, the London Jewish School of Jewish Studies, which runs adult education classes, is offering sessions on whether the Olympian ideal is Jewish and “Who really won on Chanukah?,” while the United Jewish Israel Appeal has developed six workshops, including ones on the Munich massacre and Jewish ideas on strength that have been taken up by youth groups and schools.

The closest many community members will get to the Games will be on July 25, when the Olympic torch, which has been touring across the United Kingdom, will be carried through the heavily Jewish North-West London.

“Hopefully the community will have a good showing,” Mason said. “There is a genuine building of excitement.”

During the Games themselves, the community will open its doors to tourists, from abroad and from elsewhere in the UK, who wish to experience Jewish London. A website was set up by the Jewish Volunteering Network under the auspices of the Jewish Committee for the London Games that lists all major attractions, including kosher restaurants, synagogues and Jewish landmarks. It also has a section on the history of London’s Jews and a calendar of Jewish events connected to the Games.

Some 10,000 people already have visited the website since its launch in January, according to Es Rosen, the website manager and JVN regional development manager.

“We have no idea how many people we can expect, but when people go to an international city they often seek out Jewish tourist sites,” Rosen said. “The Olympics have tremendous potential for Jewish London.”

As the Olympic Village is situated in East London, the relatively small community there has taken on the role of catering to the Jewish needs of the Olympic teams.

Four local rabbis from across the denominational spectrum will join 186 other chaplains serving the athletes, delegation members, staff and volunteers. Rabbi Richard Jacobi of the Woodford Liberal Synagogue says he will be available for those looking “for a sympathetic ear from their own faith, or from faith in general,” in case of stress, a personal emergency or any other need. The pastoral team also is part of the contingency plans in case of a large-scale incident.

“Personally this is a once-in-a-life opportunity to be involved in something that presents London and British Jewry in the best possible light,” Jacobi said. “Many people think that London is dominated by anti-Semitism and anti-Zionism, and that is not the case. There is a degree of background radiation, but it certainly does not influence people’s lives on a daily basis. People enjoy being Jewish in London.”

Nevertheless, he adds, “The 40th anniversary of the Munich tragedy is also at the back of my mind. If anything were to happen, being part of the response feels very important to me rabbinically and personally.”

Finally, the East London communities plan to hold their own events commemorating the Munich massacre. One ceremony will be on the afternoon of Tisha b’Av, on July 28, and a religious service at Waltham Forest Hebrew Congregation will be in September. Jacobi says these events would have taken place even had the IOC agreed to hold a minute of silence.

“In the midst of everything else, a minute isn’t particularly long to appreciate what these events meant,” he said. “It is important that everyone had the opportunity to come together as a group, learn more about it and associate more with it.

“We think people – mainly Jewish but also others – feel it should be remembered. It’s part of Jewish and Olympic history.”