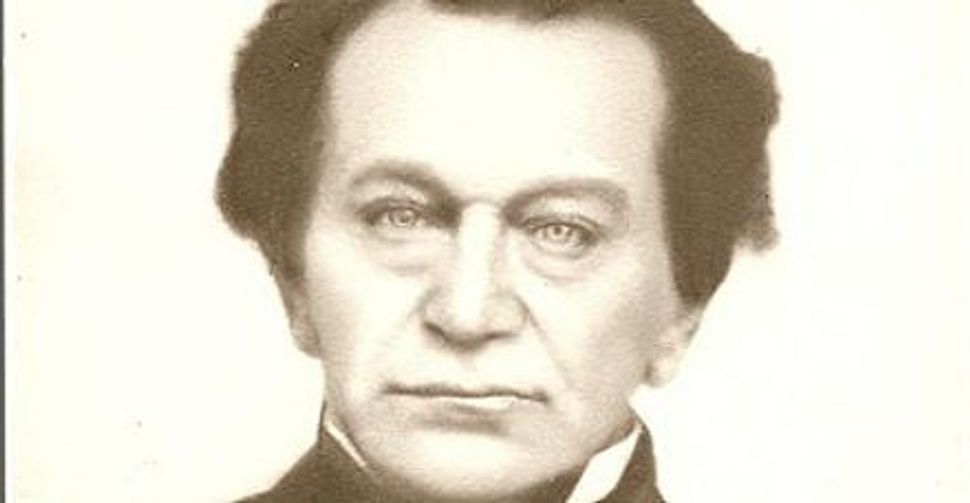 Image by courtesy of allison good 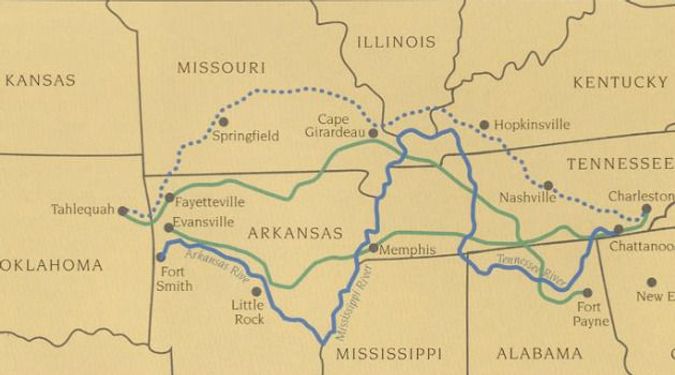 Trail of Tears: Native Americans were forced to move from their lands to barren reservations.

I was sitting in a restaurant, having lunch with my family in Macon, Ga., when my great-uncle Herbert, a genealogist by hobby, proceeded to retell our family history. I had heard it many times before, but this time there was a twist.

I had always thought that everyone on both sides of my family was Jewish, and most had been in the South since before the Civil War. But Herbert mentioned, very casually, that we had distant cousins in Richmond, Va., who were part Cherokee Indian.

Shocked, I pressed him for the story. He then informed me that Joseph Dannenberg, my grandmother’s great-grandfather, had an uncle, Nathan Baron Dannenberg, who had come to the United States from Germany in the 1820s, enlisted in the Army, participated in the Trail of Tears and fathered a child with a Cherokee princess.

That lunch was in June 2011. When I was in Savannah for Passover at my grandparent’s home, my grandmother and I got to talking about this story, which, by virtue of a chance encounter, she was able to verify. 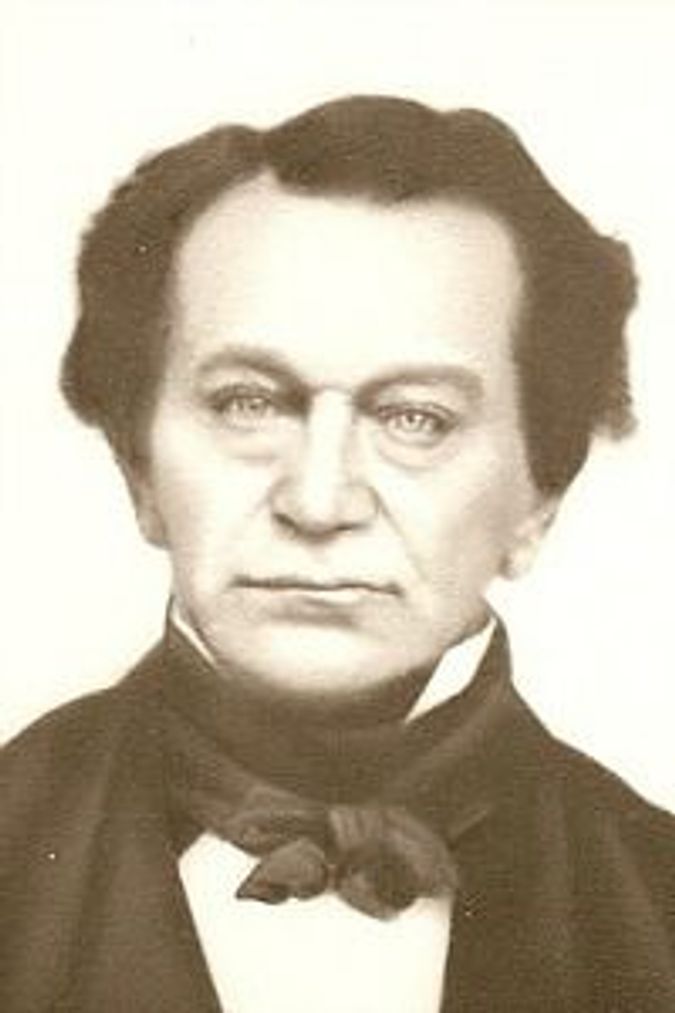 Years ago, my grandmother was at a hospital in New Orleans, where I grew up, and noticed that the nurse’s last name was Dannenberg. She commented that it was an unusual name in the United States, and then the two of them got to talking. Eventually this led to a meeting between my grandma and the nurse’s husband, from whom she got her surname. This Dannenberg was from Oklahoma, where the United States settled the Cherokee as per the Indian Removal Act of 1830.

At this point, I knew that Nathan was an anomaly in American Jewish history, a far cry from the narrative of Ellis Island, Manhattan’s Lower East Side and the Borscht Belt. But his story was more than different — it was troubling. His involvement in the Trail of Tears, or the forced relocation of Native Americans from the southeastern United States to what the government called Indian Territory, was hard to swallow. Of the 17,000 Cherokee that America’s government moved to Indian Territory, more than 4,000 died along the way.

Even though I found his story unsettling, I decided it was still one that needed to be told, as most of my family was unaware of it. So I returned home to Washington, where I now live, determined to reconstruct Nathan’s life myself. I joined Ancestry.com, scoured online message boards and sent numerous queries to my great-uncle, who had been researching this long before the Internet existed.

I went to the National Archives and contacted the Cherokee Heritage Center, in Oklahoma. An obituary in an Illinois newspaper led me to one of Nathan’s direct descendants, whom I contacted through his amateur radio club. To my dismay, he was senile. I also reached out to a rabbi in Oklahoma City, who told me it has always been assumed that Oklahoma’s first Jewish resident was a man named Bogie Johnson who arrived there in 1864.

Eventually, I was able to piece together a timeline. I learned that Nathan was born in 1807 in Trendelburg, Germany, and arrived in New York in 1827. He served a tour of duty with the U.S. Army from May 1829 to May 1834, and from April 1835 to April 1838 he was stationed at Fort Gibson in what would become Oklahoma.

In May 1838, the Army began to round up Cherokee Indians in the Appalachian Mountains in North Carolina and Georgia, and it is assumed that Nathan was sent there to help the Army force them out. The Cherokee arrived in Indian Territory, now Oklahoma, in March 1839. Right before this, in 1838, Nathan fathered a child, William Dannenberg, with a full-blooded Cherokee woman named Gracie, who died that same year.

Sometime around 1840, Nathan married Christine McPherson, a half-Cherokee woman. They raised their 10 children in Oak Grove, Okla., just one mile from Arkansas. In 1853, Nathan purchased land in Dutch Mills, Ark., where he became a prominent flour miller and an active member of the community. He also brought freemasonry to the Cherokee. According to an Oklahoma state-run genealogy database, Nathan’s Indian name was Daval, and census records indicate that he owned slaves.

The story of Nathan’s death is especially grisly. During the Civil War, he supported the Confederacy, as most Cherokee did. A group of pro-Union Cherokee, known as the Pin, fought with the U.S. Army and terrorized the settlers in the area around Dutch Mills. Word got out that Nathan had gold hidden away, so the Pin Cherokees captured him, tied him between two trees by his thumbs and tortured him for three days, trying to get him to tell where the gold was hidden.

They ultimately dismembered him and stuffed his remains into the hollows of two different trees. When his wife and two of their sons went looking for him, they saw buzzards flying around a tree; they found his remains and buried them. They discovered the second site soon after, so Nathan occupies two gravesites.

As I learned through the online message boards, Nathan’s descendants, many of whom still live in Oklahoma, are virtually all gentiles. Most of them, my great-uncle says, are unaware of their Jewish roots, and I did not mention Nathan’s Jewishness to any of my contacts unless they brought it up first.

While I was able discover quite a bit about Nathan, questions remain. I know that he was involved with the Trail of Tears, but I was unable to determine his exact role. I also wonder how it was that Nathan was essentially accepted into a community that he had been sent to forcibly relocate, and what his part-Cherokee descendants in Oklahoma think about his legacy.

For me, Nathan’s life sometimes felt like the well-crafted plot of an old Western, but the swashbuckling factor is overshadowed by his involvement with ethnic cleansing and genocide.

Learning Nathan’s story only reaffirmed what I already knew: that my family history is one of juxtaposed ethics and bipolar morality. My relatives include those who fought for the Confederacy during the Civil War and even owned slaves, as well as those who marched for civil rights and feminism. As a Jew who is staunchly social justice oriented, I still grapple with this inconsistency. It is not who I am, and not who I want to be, but it is where I come from all the same.

Allison Good is an editorial researcher at Foreign Policy magazine and a freelance journalist based in Washington, D.C.