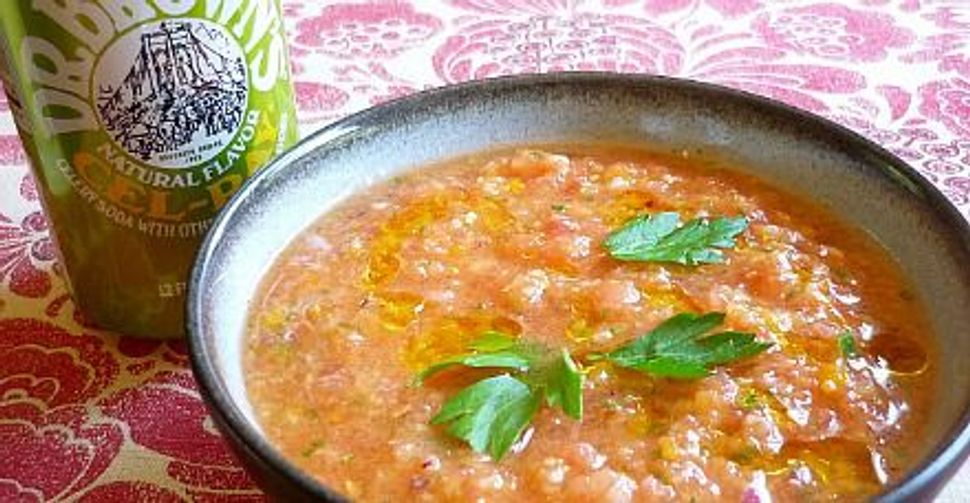 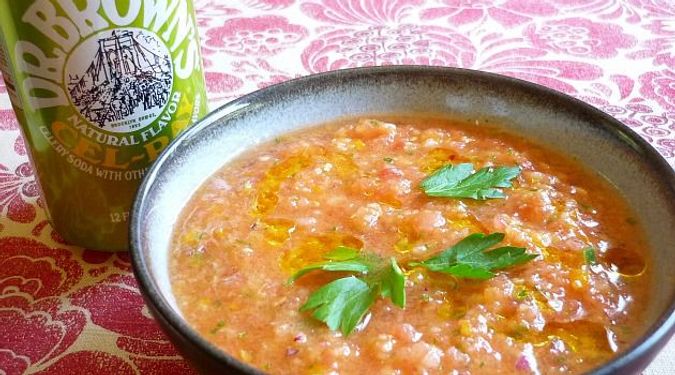 Cel-Ray of Hope: It?s fair to say Cel-Ray soda is an unusual, acquired taste. The deli favorite is enjoying a renaissance of sorts, even as an ingredient in recipes. Image by leah koenig

Regardless of whether you have tried Dr. Brown’s Cel-Ray soda, you likely have an opinion about it. With its grassy smell and vegetal flavor, it’s one of those foods — like licorice or Vegemite — that one either craves or despises with equal vigor. For some, it’s an essential part of the deli experience, with the elixir’s effervescent bubbles providing a refreshing counterpoint to meaty cuisine. Like an egg cream, Cel-Ray embodies nostalgia in a glass.

Now, thanks to the parallel food and drink trends of nouveau Jewish cuisine, retro soda fountains and artisanal cocktails, Cel-Ray is enjoying a modest culinary revival — as a soda, an element in creative cocktails and, perhaps most surprisingly, as a cooking ingredient.

New York City Mayor Michael Bloomberg may have recently proposed a ban on the sale of sodas larger than 16 ounces, hoping to curb the city’s obesity problem. But back in 1869, when Dr. Brown’s Celery Tonic was first introduced, public opinion on the herbaceous fizzy water was largely favorable. Carbonated drinks called to mind the mineral water health spas favored by the era’s homeopaths. And celery in particular was viewed as a 19th-century “superfood,” thought to hold curative powers for a range of ailments, from anxiety to indigestion.

According to company legend at J & R Bottling, which took over production of Cel-Ray’s glass bottles in 1974 (but not cans; those are produced by Pepsi), there was indeed a real Dr. Brown — a New York City physician who doled out spoonfuls of concentrated celery tonic to patients suffering from stomach trouble. “Arthur Schwartz’s New York City Food” cookbook confirms that in the early years, Cel-Ray was considered “a real tonic, a health drink.” It was not the only one, either: Cel-Ray had dozens of 19th- and 20th-century contemporaries, including Dr. Carpenter’s Celery & Phosphate, from California, and Sedgwick & Smith Celery Tonic, from Iowa.

Yet only Dr. Brown’s Cel-Ray would endure — following other sodas from pharmacy to soda fountain — and eventually become a staple in New York City delicatessens. Schwartz writes that, until the mid-1980s, Cel-Ray was sold exclusively in delis. Dr. Brown’s early kosher status (Coca-Cola, by comparison, did not receive kosher certification until the 1930s) helped solidify its identity as a Jewish soda.

Nearly 150 years after Cel-Ray first hit the market it retains traces of its health drink roots. These days it’s sweetened with corn syrup, but the drink’s peppery bite still comes from celery seed extract. That’s more than you can say for most national-brand colas, ginger ales and even root beers, which, as the “Saturday Night Live” character Linda Richman once said, contain “neither roots nor beer. Discuss.”

Creative restaurants like Saul’s Restaurant & Delicatessen in Berkeley, Calif., have capitalized on Cel-Ray’s nostalgic appeal. In 2009 they started making their own, in-house celery seed soda and cocktails. “We wanted to bring back deli’s heyday, when every corner soda fountain had its own celery soda recipe,” said co-owner Karen Adelman. In Manhattan, kitsch-inspired restaurants JoeDoe and Kutsher’s Tribeca have followed suit, serving up a gin-spiked celery cocktail and a house-made soda infused with celery seeds and tops, respectively.

For armchair fizzy drink enthusiasts, two different companies — Bittermens and P&H Soda Co. — both recently launched Cel-Ray-inspired products. Bittermens’ Orchard Street Celery Shrub bitters were developed in 2011 as a flavorful homage to the Lower East Side’s tenement era. P&H’s soda syrup, meanwhile, is actually flavored with the leafy green plant lovage, not celery. But proprietor Anton Nocito, whose father-in-law grew up drinking Cel-Ray on the Lower East Side, told me that he had the classic drink on the brain when he created the flavor last year. He sweetens his syrup with both sugar and golden raisins, which, he said, “cut through the plant’s overpowering flavor,” leaving behind a floral, celery-esque syrup perfect for spritzing with seltzer.

Bittermens co-owner Avery Glasser told me that customers have been using Bittermens’ aromatic mix of celery, ginger, apple, caraway and apple cider vinegar to flavor “not just cocktails, but cooked dishes like potato salad, too.” As someone who falls squarely into the Cel-Ray fan club, I find this news exciting. And also rather elegant. When used in the right situations, Cel-Ray’s balance of sweet and herbaceous flavors brightens marinades, sauces, salads or, as I suggest in the this recipe, even a summery tomato gazpacho. Cel-Ray was born as a health tonic and grew up in the delicatessen. Perhaps now is the time to usher in its newest phase as the home cook’s secret weapon.

Cel-Ray adds a hint of sweetness and celery flavor to this refreshing summer soup.

1 jalapeño pepper (or 2 if you like heat), seeded and roughly chopped

1. Bring a pot of water to boil over high heat.Meanwhile, score a small X into the bottom of each tomato and set aside. Add equal parts ice and water to a large bowl and set aside.

2. When the water is boiling, drop the tomatoes into the pot, one or two at a time. Boil for 30-45 seconds, or until the skin begins to peel off, then immediately transfer to the ice bath and let sit for 5 minutes. Once cooled, peel skin off tomatoes and discard skin. Core and roughly chop peeled tomatoes.

3. Place prepared tomatoes, onion, jalapeño, cucumber, pepper, garlic, parsley, mint and olive oil in a food processor and pulse to desired consistency. (Do this in batches, if necessary.)

5. Pour tomato mixture into a larger bowl and add Cel-Ray and desired amount of vinegar. Season mixture liberally with salt and pepper. (Salt is a tomato’s best friend, so don’t under-salt.)

6. Cover and refrigerate for at least an hour, or ideally overnight, to let flavors meld. To serve, ladle into bowls and top with a drizzle of olive oil and additional parsley.