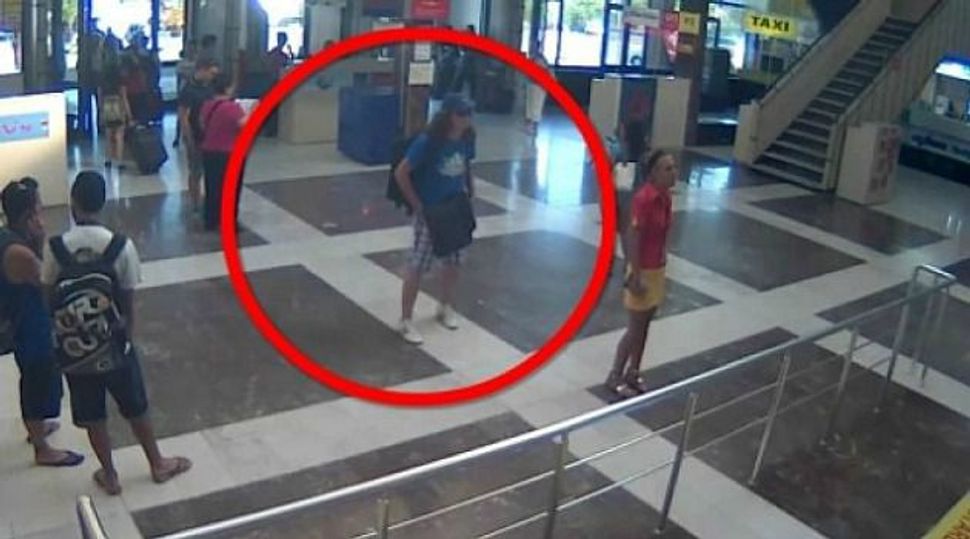 ?Normal? Killer: The suspect in the Bulgaria bus bombing, shown here in security footage, looked like a normal traveller. Image by haaretz

The attack, carried out by a man wearing shorts and carrying a backpack, took place on Wednesday at Burgas airport, a popular gateway for tourists visiting the Black Sea coast.

The bomber had been circling around a group of buses, which were to take Israeli tourists to a resort near Burgas, for about an hour before the explosion, the surveillance footage showed.

“We have established there was a person who was a suicide bomber in this attack. This person had a fake driving licence from the United States, from the state of Michigan,” Tsvetanov told reporters at the airport.

“He looked like anyone else – a normal person with Bermuda shorts and a backpack,” he said.

The bomber was said to be 36 years old and had been in the country for between four and seven days before the attack.

Special forces had managed to obtain DNA samples from the fingers of the bomber and were now checking databases in an attempt to identify him, Tsvetanov said. Bulgarian security services had received no indications of an imminent attack.

The tourists had arrived in Bulgaria on a charter flight from Israel and were on the bus in the airport car park when the blast tore through the vehicle. Body parts were strewn across the ground, mangled metal hung from the double-decker bus’s ripped roof and black smoke billowed over the airport.

On Thursday, the airport in Burgas – a city of 200,000 people at the centre of a string of seaside resorts – remained closed and police prevented people from approaching.

Beyond the cordons, about 100 holidaymakers waited for their flights but had been told they would be there until midnight. Officials were setting up portable toilets and tents for stranded travellers and Bulgaria’s parliament opened with a one minute silence in memory of the bombing victims.

“It felt like an earthquake and then I saw flying pieces of meat,” said Georgi Stoev, an airport official. “It was horrible, just like in a horror movie.”

At Varna airport, also on the Black Sea, police with dogs were checking for explosives and tourists were asked to carry their luggage to their planes, national radio reported.

Israeli Prime Minister Benjamin Netanyahu said: “Israel will react powerfully against Iranian terror.” There was no immediate Iranian reaction to the Israeli accusation.

The blast occurred on the 18th anniversary of a bomb attack on Argentina’s main Jewish organisation that killed 85 people. Argentina blamed Iran, which denied responsibility.

Medical officials said two badly injured Israeli tourists were taken to hospitals in Bulgaria’s capital Sofia. One woman was in intensive care with head and chest injuries and a man was in a critical state with burns covering 55 percent of his body.

About 70 Israeli tourists, including those lightly injured by the blast, left Burgas on a Bulgarian government airplane to Israel, the interior ministry said.

The European Commission and NATO condemned the attack, joining criticism from the United States, Britain, France and Germany.

Israeli officials had previously said that Bulgaria, a popular destination for Israeli tourists, was vulnerable to attack by Islamist militants, who could infiltrate via Turkey.

Israeli diplomats have been targeted in several countries in recent months by bombers who Israel said struck on behalf of Iran.

Although Tehran has denied involvement, some analysts believe it is trying to avenge the assassinations of several scientists from its nuclear programme that the Iranians have blamed on Israel and its Western allies.

Israel and Western powers fear Iran is working towards a nuclear bomb but it says its uranium enrichment work is strictly for peaceful ends. Both Israel and the United States have not ruled out military action against Iranian nuclear facilities.