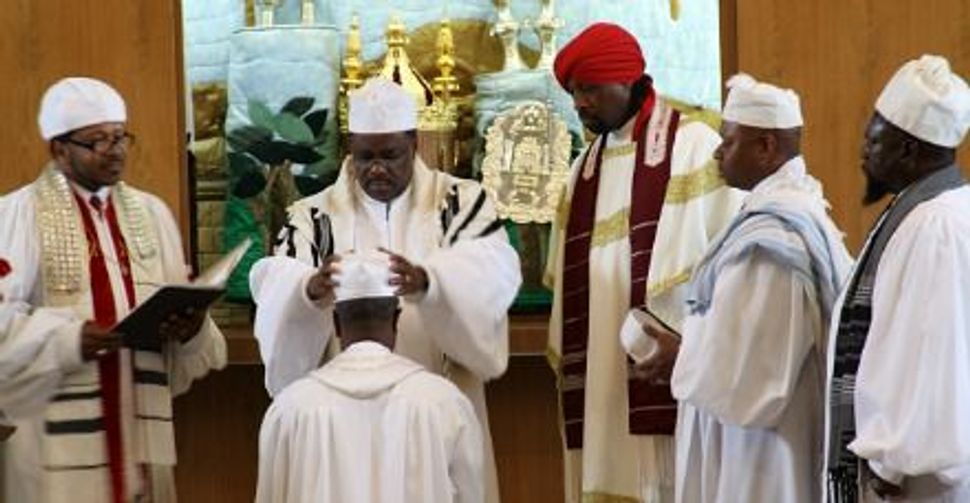 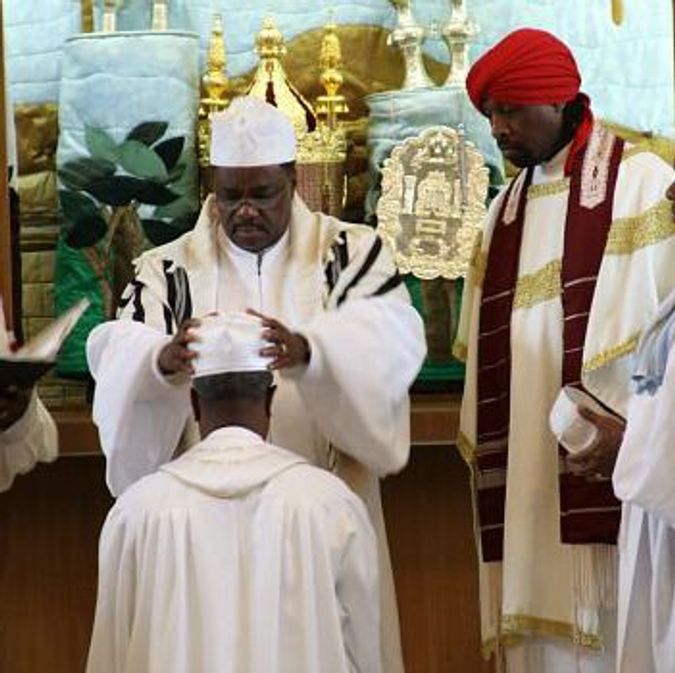 The ordination took place on a sun-drenched Sabbath, in a synagogue used many decades ago by Lithuanian Jews. But on June 23, it was 200 mostly black worshippers, many in brightly colored African dress, who were on their feet, eyes fixed on a procession of eight white-robed rabbis with ceremonial miters crowning their heads as they strode, single file, down the aisle separating the men?s and women?s seating.

All were gathered at Beth Shalom B?nai Zaken Ethiopian Hebrew Congregation to create a new rabbi for this small, passionate but scarcely known tradition of black Judaism.

Read the Forward?s account of Black Jewish services. It?s not your typical Saturday at shul.

Though it was mid-afternoon and the morning shacharit service was long finished, very few had left the sanctuary; the ordination of the new rabbi was the day?s big event. As a delegation of black Jews visiting from New York for the important occasion looked on, the rabbis mounted the bimah and, with the open ark as a backdrop, arranged themselves into a half circle and faced the congregation.

For many mainstream Jews, this is a ceremony that might seem alien. But today, the differences between them and these black Jews, who have long been ignored or dismissed as inauthentic by the Jewish establishment, seems more like one of culture and ethnicity than Jewish identity.

While they once called themselves Hebrew Israelites exclusively to distinguish themselves from Jews of European extraction, the black Jews now readily count themselves among the Jewish people without qualification. An increasing number seek out formal conversion, a practice previously seen only as a concession to the expectations of mainstream Jews. Some 85% of the members at Beth Shalom have done so, according to Rabbi Capers Funnye (pronounced Fun-NAY), their spiritual leader, who is himself a member of the mainstream Chicago Board of Rabbis (and cousin to First Lady Michelle Obama).

Today, a cadre of teens and young adults have graduated from yeshivas and Jewish day schools, creating educational parity and a shared frame of reference with the wider Jewish community. And last year, Israel?s ambassador to Washington, Michael Oren, paid an unprecedented visit to a black synagogue, Temple Bethel in Philadelphia, and told them, ?We are a single people endowed with the same blessings and obligations. Israel belongs to us all.?

Back in Chicago, the man for whom the ordination ceremony was intended was last in line to mount the bimah. Wearing a knit skullcap, James Brazelton ascended and knelt in front of the Ark. A fit and youthful 62-year-old Vietnam War veteran with a broad smile, Brazelton was raised as a Baptist, became a Hebrew Israelite in the early 1970s and was converted by a Conservative beit din, or religious court, in 2003.

Rabbi Sholomo ben Levy, president of the Israelite Board of Rabbis, dabbed oil on the forehead of the kneeling man. Then, Funnye, as spiritual leader of the host synagogue, removed Brazelton?s kippah and replaced it with a tall white miter, a head covering worn by the high priest in the ancient Temple. After reading proclamations extolling his achievements, the attending rabbis helped Brazelton rise, now transformed into Rabbi Yahath ben Yehuda (the name Yahath is found in I Chronicles). He turned a beaming face to the congregation, who acknowledged him with applause, hallelujahs and flashing iPhone cameras.

The ordination pageant is rooted in biblical imagery. But that is not unusual for a movement whose modes of worship are at once traditional and steeped in black religious expression. The earlier three-hour Sabbath morning service, or shacharit, for example, was based on the Orthodox ArtScroll prayer book. But the inspirational preaching, punctuated by frequent cries of hallelujah, emet (truth) and ken (yes) from the worshippers, would be unusual in most synagogues. Even more so the joyful music of the choir, and its full rhythm section of keyboard, guitar and drums to sanctify the day.

The Hebrew Israelites? Jewish practice began more than 90 years ago, when Wentworth A. Matthew, an immigrant to New York from the West Indies, established a Harlem congregation known as the Commandment Keepers in 1920. Matthew, revered as the founding rabbi of the movement, also created a precursor to the Israelite Rabbinical Academy, which trained rabbis to lead prayers and rituals fashioned after the Ashkenazi and Sephardic Jews who were his neighbors in Harlem.

Over several decades, a dozen or so Matthew-inspired synagogues sprouted up in Brooklyn, Queens, the Bronx and Harlem. Matthew taught that Hebrew Israelites had no need to conform to the conversion requirements of mainstream white denominations; nor did he himself seek smicha ? formal rabbinic ordination via an established rabbi or rabbinic panel ? to function as a rabbi. Matthew avowed that all this was unnecessary because the roots of black identity reached back to the Israelites of the Torah. Black Jews, even today, view themselves as having returned to their true identity, which was obliterated by the catastrophic Middle Passage into slavery, when millions of Africans were torn from their homeland and dispersed, effectively erasing their history, culture and family ties.

As if echoing history, black Jews in the US today feel a connection to African groups who identify as Jews. Funnye has traveled to Nigeria, South Africa, and Uganda to connect with and assist in the education of the Lemba, Igbo, and Abayudyah ? ethnic groups with members who assert a Jewish identity. A bridge-builder, Funnye is associate director of Be?chol Lashon (In Every Tongue), a San Francisco-based nonprofit that advocates for inclusiveness and diversity among the Jewish people and sponsors his work in Africa.

Yahath, the movement?s newest cleric, began studying Hebrew and attending Sabbath services in the early 1970s. ?When I returned from Vietnam in 1972,? he told the Forward, ?I knew Christianity didn?t satisfy me. I was searching spiritually, until a friend talked to me about the idea that black people in America were connected to the Israelites in the Torah. That was the beginning.?

In 2003, he enrolled part time at the Israelite Rabbinical Academy, intending to become a mohel because the black Jews of Chicago don?t have anyone in their community to perform ritual circumcisions. ?But we couldn?t get anyone to train us,? he remarked pointedly, referring to the mainstream Jewish community.

As he began rabbinical training, Brazelton chose for pragmatic reasons to undergo a Conservative conversion, although Hebrew Israelites feel it should not be necessary. ?We think of it as ?reversion,? not conversion,? Yahath said. ?I did it to remove any doubts in the minds of others.? Funnye, his mentor, was raised as a Methodist and had a formal conversion himself for the same reason. For those in his congregation, the process generally includes 18 months of study and meeting the requirements of Chicago?s Conservative beit din. There are no data on how many of the Hebrew Israelites, who Funnye says number some 10,000 nationally, have undergone formal conversions.

Those who become rabbis do it as a labor of love. There is no pay. Like the rabbis of long ago who lived in struggling communities, these rabbis work day jobs to support their own families. Brazelton is a plumber by trade but is close to retiring.

Although the terms ?Israelite,? ?Yisrael? and ?the Jewish people? are familiar refrains from the pulpit, the State of Israel is rarely mentioned. ?Our communities are not affluent enough to take time off work to live in Israel,? explained Rabbi Baruch Yehuda of B?nai Adath Kol Beth Yisroel in Brooklyn, who is also dean of the Israelite Rabbinical Academy. ?We do support the State of Israel, however, it is a hard topic to get across to a people who are not recognized by the very state we support, in word and deed.?

Another complication of the ?Israelite? label is that it has been adopted, often misleadingly, by other black American groups that endorse Christian theology or, in some cases, that are anti-Semitic. ?Not everyone who calls himself a Hebrew Israelite is Jewish,? Funnye said. ?The street preachers you hear with all that negativity also say they are Israelites. but [they] have nothing to do with us or with Judaism. Neither do the ?black Hebrews? living in Dimona, Israel.?

Although the Hebrew Israelites insist they need no one?s stamp of approval, numerous comments and conversations reveal an underlying concern that vexes them: When will they no longer be invisible to the mainstream denominations of American Jewry, and when will their Jewish identity be honored on their own terms?

Third- and fourth-generation Jews are now common in the Israelite community, but many, including Jewish day school graduates, cite stories of being doubted and ?tested? by people who are far less observant and educated than they are. Funnye told of sitting on a flight next to a woman who described herself as a ?secular Jew.? She then quizzed him ? as if testing his Jewishness ? about his holiday observance. ?In our community,? he quipped, ?a secular Jew is an oxymoron.?

Shlomi Mizrahi, an alumni of Brandeis Hebrew Day School on Long Island, who speaks fluent Hebrew and worked as a translator for Delta Air Lines? Israel business, attended a Conservative synagogue in Atlanta for two years. When he asked for an aliyah, or call to the Torah, to celebrate his 30th birthday, he was refused, he recalled, because, without conversion papers, the rabbi would not accept that he was a Jew, even though his parents and grandparents were Jews and the yeshiva had enrolled him as a Jew. Instead, Mizrahi celebrated with an aliyah at the black synagogue in Mount Vernon, N.Y., Beth HaTefilah Ethiopian Hebrew Congregation, where his uncle was the rabbi. Mizrahi, now 35, was ordained by the Israelite Rabbinical Academy in 2000, at age 24.

At the Chicago synagogue, congregant Tamar Manasseh?s 15-year old daughter, Avriel, read from the Torah during the Sabbath service. Both Manasseh and her daughter are graduates of a Jewish day school on the city?s South Side. Yet Manasseh recently pulled her son out of this school because she felt he suffered discrimination, which she describes in her self-published book, ?Chai-ME.? At the same time, the International Israelite Board of Rabbis has its own boundaries that Manasseh is challenging. Currently, the Israelite Rabbinical Academy does not ordain female rabbis, and Manasseh is eager to be the first.

Sholomo ben Levy, the Israelite Board of Rabbis president, sees lack of acceptance by mainstream Jews as a disappointment. But he believes the emerging awareness of diversity offers an opportunity. Levy, who also serves as spiritual leader of Beth Elohim in Queens, said, ?We not only have a diversity of complexion, but a diversity of experiences. In the past, when [mainstream Jews] have reached out to us it was tentatively, wanting us to be more like them instead of asking what we can bring to Judaism that is part of our culture. If we can celebrate the diversity that exists, we will all be more successful.?