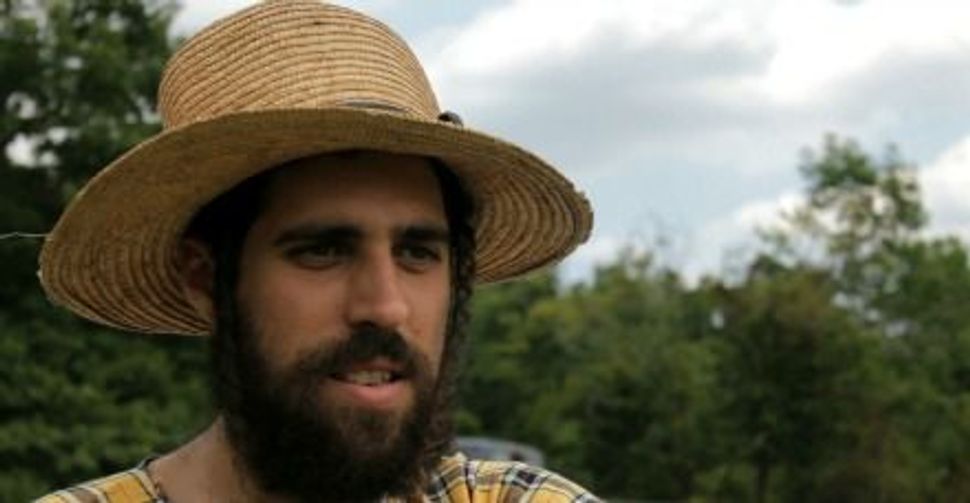 Goshen, the fabled Egyptian area that the ancient Israelites settled and farmed when famine struck the Holy Land, was so fertile, according to the Bible, that the Israelites multiplied at rates that made the Pharaohs afraid.

It?s hard to see Goshen, N.Y., in the foothills of the Catskills, as the locus of a similar Jewish explosion. But who knows? This summer, a group of young farmers are launching Yiddish Farm, a new experiment in Jewish agriculture, in the rolling hills of Orange County, some 50 miles northwest of Manhattan.

?Behind me we have 13 rows of Yukon Gold organic potatoes that I planted just before Pesach time,? Yisroel Bass told me on a recent Sunday afternoon, surveying a field of crops. ?They?re really taking off with all the rain.? He extolled the garlic a little farther down, and beyond that, rows of white beets, ?an heirloom variety.? Below that were plantings of spinach, oats, three carrots, wheat, dill, sunflowers, zucchini and more beets.

This is farming with a diasporist twist. Normally, Bass, a tall, tanned 23-year-old with a straw hat, beard, yellow plaid tzitzis and Hasidic-style peyes, would be speaking Yiddish. For a visiting journalist he was willing to make an exception, but for everyone else taking part in this venture, Yiddish is the lingua franca.

The idea of Yiddish Farm is simple, if novel. Bass and his partner, Naftali Ejdelman (the son of Forverts editor and staff writer Rukhl Schaechter), aim to create both an immersive environment for speaking and learning Yiddish and a model of sustainable agriculture. In this, their first real season, they have attracted a handful of full-time participants to live and work on their property in Goshen for the summer. It?s early days, and spirits are high.

?We?re making it happen, we?re running a farm,? said participant Sarah Wolk, 24, who is living and working at the farm for the entire two-and-a-half months. ?We cook, we live together, we clean, we?re running a household and from what I hear we?re also growing vegetables. And I?m learning so much Yiddish!?

?They?re pioneering cultural and linguistic terrain that hasn?t really been explored,? said Shamu Fenyvesi Sadeh, director of Adamah, a Jewish agricultural fellowship in Connecticut. ?But it fits into larger trends of people being interested in the sources and origins of things, whether that?s language, culture or food.?

Yiddish Farm is an unusual venture today, but Jewish agricultural projects have a long history in the United States. In the late 19th and early 20th centuries, Jewish farms were scattered across the country, from chicken farming communities in Roosevelt, N.J. and Petaluma, Calif., to the agricultural colony of Clarion in Gunnison, Utah. By 1938, Time magazine reported, there were some 100,000 Jewish farmers in the United States.

Many of these farmers were just trying to make a living, but others had deeper ideological goals. The socialist Am Olam group founded one of the earliest communal Jewish farming efforts in Oregon, in 1882, which they called ?New Odessa.? In the Farmingdale area of New Jersey, in the 1920s, Jewish farmers founded two cooperative associations, a unit of the International Workers Organization and a branch of Zionist Pioneer Women. The territorialist movement, a Jewish political ideology that advocated for a Jewish homeland outside of Palestine, also sought to start agricultural colonies in America and other countries. Ejdelman?s grandfather, Yiddish linguist and territorialist Mordkhe Schaechter, thought to start a Yiddish-speaking community in New Jersey in the 1950s, though his plan never came to fruition. Perhaps, belatedly, it is.

In 2009, Bass, who grew up in a Conservative Jewish household on the North Shore of Long Island, was studying philosophy at City College, teaching himself Yiddish and exploring New York?s Yiddish-speaking community. Though he was learning the language and making friends, he felt that existing Yiddish endeavors were failing to move the culture forward.

?To a large degree were we just coming together and talking about Yiddish, in Yiddish. It was like this meta-Yiddishism,? he said. ?I thought: ?What?s the next step? Hanging out drinking beers shouldn?t be the great accomplishment of Yiddishists in the 21st century.??

In his search for ideas, he organized a group to discuss the works of Chaim Zhitlovsky, a writer and political thinker who laid the groundwork for modern Yiddishist ideology. They met each week at Yonah Schimmel?s Knish Bakery, on Houston Street in Manhattan. Gradually, he arrived at the idea of starting a Yiddish-speaking farm.

That winter, Bass ran into Ejdelman at a party in the Park Slope neighborhood of Brooklyn. Ejdelman, a red-bearded 26-year-old who grew up in a Yiddish speaking home, had developed an interest in environmentalism and organic agriculture while studying at Brandeis University. He was involved with such Jewish environmental organizations such as the Teva Learning Center, Hazon and Adamah. But for Ejdelman, ?something was missing, because to me Yiddish is such an important part of my Judaism.? The encounter with Bass was just the push he needed.

The two aspiring farmers spent the next year and a half laying the foundations for Yiddish Farm. Ejdelman pointed Bass toward Adamah, where Bass spent the summer of 2010 learning the basics of organic agriculture. They wrote grant proposals and received start-up funds from Yiddish-oriented foundations such as The Naomi Foundation, the Binyumen Schaechter Foundation and the Fishman Family Foundation. Most important, they started looking for land.

Finding a property wasn?t easy. The pair checked out some half-dozen sites, but each one fell through. Finally they heard about a property through Ejdelman?s mother, who hosts an online cooking show for the Forverts. The family of her co-host, Jewish culinary historian Eve Jochnowitz, owns a 225-acre property that was once home to a Lubavitch bungalow colony. It was large, conveniently located and had running water. Best of all, it belonged to a family with Yiddish roots. And a Yiddish farm in Goshen would not be a lone outpost of Yiddish in the area. Fifteen minutes down the road is Kiryas Joel, a village of more than 20,000 Yiddish-speaking Satmar Hasidim.

Yiddish Farm was founded on three principles: to foster unity among Yiddish speakers, to create an expanded role for the Yiddish language and to promote environmentalism through organic agriculture. All three were apparent during a Sabbath sojourn at the farm in early June.

The farmhouse at Yiddish Farm is small but cozy, with a screened-in porch, a couple of bedrooms and a large, well-equipped kitchen. In the combined living and dining room there are three orange couches, an ornate mahogany china cabinet and a baby grand piano. Volumes by Zhitlovsky vie for space on the shelves with Yiddish texts, tractates of the Talmud and books with names like ?Grass Fed Cattle? and ?Edible Wild Plants.? In the bathroom, a book called ?Jewish Farmers of the Catskills: A Century of Survival? was perched on the edge of the tub, two pages bookmarked.

Participants at Yiddish Farm change from month to month, or even week to week, but during my visit they included Arlen Baden, a 66-year-old retired guidance councilor and vegan chef; Marshall Zalc, a 51-year-old yoga and meditation instructor from Brazil; Kovi Weiner, an incoming sophomore at New York University, and Wolk, a full-time fellow at the egalitarian Yeshivat Hadar. As others come and go, Bass manages the Farm, eyes the pesticide-free plants for signs of insects and teaches participants how to properly hoe potatoes. Ejdelman acts as a combined Yiddish teacher, social director and rebbe, keeping the ad-hoc community on an even keel.

The participants offer different reasons for attending and for paying the $2,400-a-month, or $4,400-a-summer fee. Leana Jelen, a graduate student at Gallaudet University in Washington, D.C., grew up in a Yiddish-speaking home in Chicago, and came for the opportunity to use the language in an outdoor, rural environment. Others are beginners and have various motivations for learning.

?I know a lot of people in different parts of the Yiddish world, and I think learning Yiddish would be a good way to gain access to those worlds,? said Wolk.

?My parents and grandparents speak it, as well as my teachers and many Jews I meet,? added Ezriel Gelbfish, a 21-year-old Yeshiva University student from Brooklyn?s Flatbush neighborhood. ?It?s a big part of my heritage.?

The farm also boasts a shifting array of guests who stop by, sometimes unannounced, for a weekend, a day or an afternoon. They are often Hasidim or former Hasidim that Bass and Ejdelman have befriended. Ultra-Orthodox singer Eli Beer recently shot a music video on the property, bringing a crowd of spectators who heard about the shoot on Twitter. The farm has placed an ad in the Satmar newspaper Der Yid, inviting Hasidim to use the property as a campground.

Such unlikely associations are in keeping with the organization?s goal of bringing together the full range of Yiddish speakers. ?For people who are Hasidic it opens a door to a different kind of Yiddish,? Bass noted. ?Here are young people who aren?t wearing black coats, and they really care about being Jewish. It?s very surprising for them.?

The farm itself, which is Sabbath observant and kosher, reflects the blend of very progressive and very traditional elements that can be found in the Yiddish community. During my stay we prayed the Friday night service in the Ashkenazi fashion, sounding like any small Orthodox synagogue in Brooklyn. But men and women prayed together.

Yiddish Farm?s biggest challenge is to transition from a grant-supported organization to a self-sustaining entity. Currently the farm receives contributions via Yugntruf ? Youth for Yiddish, an established tax-exempt charity that acts as its fiscal sponsor. This allows the farm to receive tax-deductible donations as Bass and Ejdelman work on getting the farm its own not-for-profit status.

As the farm grows, they hope to become self-sustaining by selling produce at farmers markets and directly to supermarkets and caterers. The farm has already sold some of its first crops to Landau?s Supermarket, in Kiryas Joel. They also plan to produce packaged goods, like borscht and popcorn, and intend to raise a herd of goats and egg-laying hens.

Still, no one is expecting that it?s going to be easy. ?It?s not easy being a farmer, it?s not easy being a Jew and it?s even harder being a Yiddish-speaking Jewish farmer,? said Bass. ?But we?re committed to it. Jews have been doing this for a very long time.?