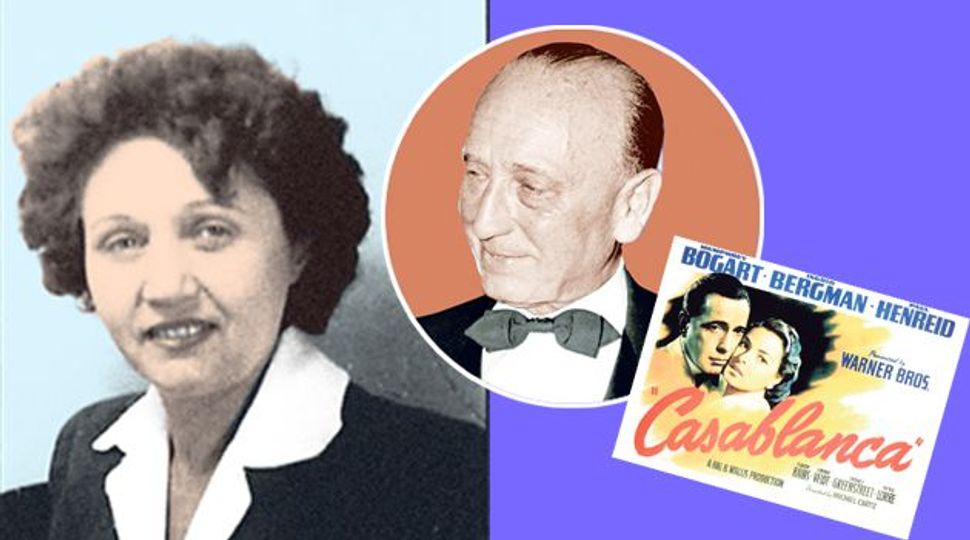 In 1972, shortly after Thilde Foerster died, her son and granddaughter went to clean out her apartment in Santa Barbara, Calif. There they found an old battered suitcase hidden under her bed, filled with film scripts, plays and an unfinished novel. Foerster’s son, Michael Forster, knew that his mother had worked in the film industry in Europe during the 1920s and early ’30s, but the granddaughter knew nothing of this.

The contents of the suitcase would reveal a story so rife with Holocaust drama, romantic tragedy and religious awakening that decades later, the granddaughter, Michelanne Forster used them as fodder for her play, “Don’t Mention Casablanca.” The villain in the real-life drama involving Forster’s father and grandmother turned out to be a legend from Hollywood’s golden era, “Casablanca” director Michael Curtiz. He was Michelanne Forster’s grandfather.

Forster grew up in Southern California and moved to New Zealand when her father got a teaching job in Auckland. She has lived in New Zealand for more than 30 years, and has become one of its most well-regarded playwrights, winning commerical and critical acclaim. Forster says that although she was very close to her grandmother, Thilde Foerster “never said a word to me about her past.” The playwright’s father wasn’t much better. He didn’t tell his daughter that he was Jewish until she was a teenager.

Forster detailed her poignant family history in an interview with the Forward, conducted in Christchurch, New Zealand, just a few blocks from the Court Theater, where “Don’t Mention Casablanca” debuted in 2010.

The family saga began in Vienna in 1919, when Thilde Foerster had a brief affair with a hotshot Hungarian director named Mihály Kertész. Foerster became pregnant and had a son, Michelanne Forster’s father. Kertész didn’t offer to support Foerster or his baby boy, so Foerster placed the infant in an orphanage. She eventually took custody of her son, but when she learned that Kertész had fathered another child in Vienna out of wedlock, she went to court and got Kertész to pay child support.

Listen to a podcast about Thilde Foerster and Michael Curtiz:

The child support stopped after Kertész went to America and changed his name to Michael Curtiz. In Hollywood he hit the big time, directing such celluloid blockbusters in the 1930s and ’40s as “The Adventures of Robin Hood,” “Yankee Doodle Dandy” and, most famously, “Casablanca,” for which he won an Academy Award. During his life, Curtiz directed 173 films, first in Europe and then in the United States. He died in 1962.

During the 1920s and ’30s, Foerster was also finding success in the film industry. She became a sought-after scenario writer in Europe. Her job was to look for stories to turn into films and write treatments for them. At one point she worked for Germany’s largest movie maker, the UFA (Universum Film AG) film studios in Berlin. In 1931, she traveled to Hollywood, where RKO Pictures agreed to turn one of her story ideas into a movie starring Pola Negri, the great German silent film star. The film, “A Woman Commands,” got made but flopped at the box office the following year.

While in Hollywood, Foerster went to court and tried to get Curtiz to resume paying child support, but the judge ruled that an American court lacked jurisdiction over a European matter. Newspaper accounts of the legal battle portrayed Foerster as a “fan dancer” and gold digger trying to exploit her connection to the famous Hollywood director.

Back in Europe, Foerster’s son, who was affectionately referred to as Michi, was being cared for by his Uncle Ludwig, whom playwright Michelanne Forster describes as a bit of a luftmensch, or someone without a consistent income. When Thilde Foerster stopped sending money to her brother and son, there were hard times in which Ludwig Foerster and his nephew skipped out on restaurant meals. At one point, Michi and Uncle Ludwig were living in a farmer’s cellar, eating potatoes. At another they came to rely on the charity of the Jewish community.

In 1933, after spending a considerable amount of money in her failed court battle with Curtiz, Thilde Foerster left Hollywood for Mexico because she had to be outside the United States to apply for a permanent visa. Since the Third Reich was on the rise, she had no chance of continuing to work in the German film industry. During her entry interview with immigration authorities, she presented an official with a German book that she had not written. It had a fake cover with her picture and byline on it. Foerster claimed to be a famous author back in Germany, and said she had written the book, “Hearts Behind Bars.” The immigration agent fell for it.

When the Reichstag building, the home of Germany’s parliament, burned down in 1933, Foerster called her brother and directed him to get her son out of Germany. Ludwig Foerster and Michi headed to Austria. It was during this journey that Michi was informed that he was a Jew. In Vienna the two were supported by the Jewish community for six months. A visa was secured for Michi, and at end of 1934, the newly discovered Jew sailed to America by himself at the age of 13.

“I think he was really brave,” Michelanne Forster says of her father.

When the teenager arrived in California that same year, his mother informed him that she had not, in fact, ever been married to his famous father. He also realized that the great director wanted nothing to do with him. Eventually, Thilde Foerster succeeded in getting a court to order child support from Kertesz in California.

Michi didn’t end up meeting his father until he was in college, though in the play Forster imagines an encounter when Michi was younger.

Michi: Why did you divorce my mother?

Michi: I said, why did you.

Kertesz: Kid, listen. I never was married to your mother. Never. If she said different, she told you a great big whopping Pinocchio lie. You want to know the truth about her and me? That’s why you come here, yeah? Then I tell you. Hear it right from the horse’s ass. We were two ships passing in the night. Two f——-g ships. That was all.

Michi: I think I should go now.

Michi: Yeah, well. I got what I came for.

Kertesz: Buck up, kid. Here. Take this. You can put it in your room and throw darts at it.

He gives Michi a large publicity photo of himself. He autographs it.

Kertesz: To Mike. From Mike. I could write from one bastard to another, but your mother might not like. You going to shake my hand?

When Forster first told her father that she wanted to write her grandmother’s story, he initially scoffed at the idea: “My dad basically said to me: ‘You’re cheapening yourself as a writer. You’re just trying to ride on the coattails of your famous grandfather, and that’s beneath you. I’m disappointed in you.’”

Forster wanted her father’s blessing for the play. She also realized that she couldn’t really write it without her father’s assistance. It wasn’t until after the playwright had her own children, and her father became a grandfather, that he became more open to the idea.

“Life is short, and you gradually let go of the things that hurt you as a child and as a young man,” Forster observed. “You see them in a different light as time goes by.”

Among the works found in that battered suitcase under Thilde Foerster’s bed when she died was a play that Foerster wrote about Hitler. Forster says the play made it into the finals in a playwriting competition in the late 1960s. If it had won, it would have been staged at Lincoln Center.

“I hadn’t really appreciated that the whole time she was my grandmother, she was actually writing; she was still hoping to break through somehow with a work, but that never happened for her,” Forster said.  Thilde Foerster spent the last years of her working life as a secretary in the Los Angeles Sherriff’s Department. She spent the end of her life in a nursing home after surgery for a brain tumor.

Forster was the only member of the family in California when her grandmother died. The playwright remembers her grandmother as a witty, politically aware woman who was a good storyteller. She says that the two of them were quite close, despite the fact that Thilde Foerster revealed almost nothing about her life.

Foster’s father was similarly tight-lipped. He didn’t reveal that he was Jewish until Michelanne Forster was 14, just a year older than he was when Uncle Ludwig had informed him that he was Jewish. When a classmate insisted that Forster couldn’t be Jewish because her mother wasn’t Jewish, she confronted her father, who said that as far as he was concerned, she was Jewish, too, even if her mother was a gentile.

“My father said to me, ‘You’re Jewish enough for Hitler.’ And that sentence went straight into my heart and stayed with me ever since,” she said.

Forster had felt that she was a failure as a Jew because she lacked a Jewish education as a child, but over the years she has decided that she is part of the Jewish people.