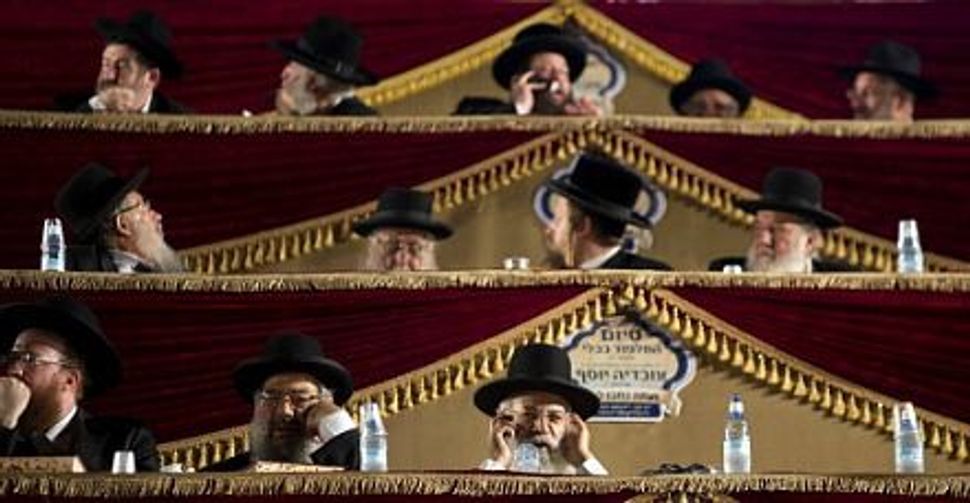 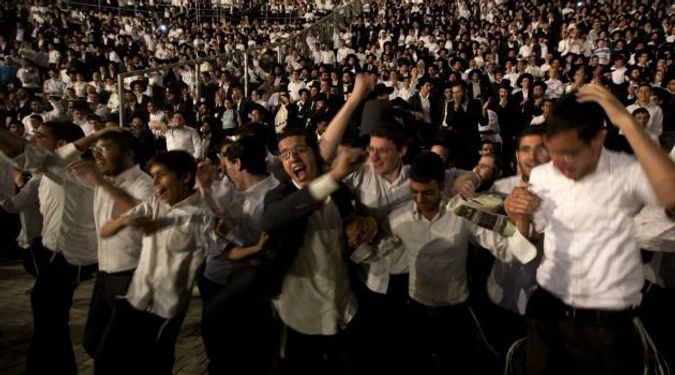 Reason To Celebrate: Orthodox youth in Jerusalem celebrate the completion of the page-a-day reading of the Talmud. Image by getty images

The gathering of 90,000 Jews at New Jersey’s MetLife Stadium on August 1 is the culmination of what could be seen as the world’s largest book club celebrating the completion of one of the world’s longest books.

For the past seven and a half years, men — and some women — around the world have read the same page of Talmud each day: 2,711 pages from beginning to end, in a practice known as Daf Yomi, or “page of the day.” The August 1 event, dubbed Siyum HaShas, is being billed by Agudath Israel of America, the ultra-Orthodox umbrella group sponsoring it, as a “once-in-seven-and-a-half-year Jewish unity opportunity.” 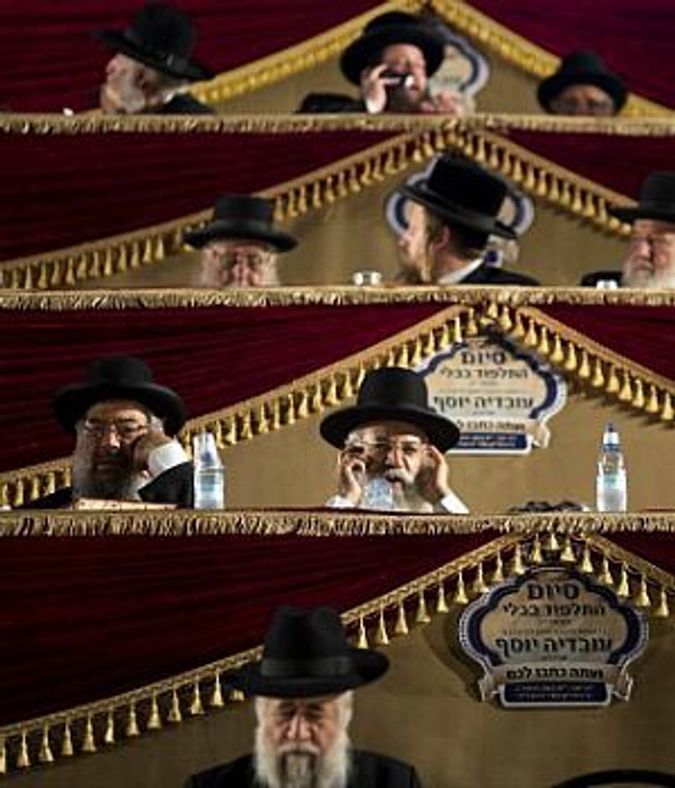 Rabbis watch during the celebration of the Daf Yomi in Israel this week. Image by getty images

Still, despite the huge numbers the event will draw, the 90% of American Jews who are neither Orthodox nor ultra-Orthodox may well ask themselves: a unity opportunity for whom?

READ the Forward’s full coverage of the event at MetLife Stadium.

Women, separated from the men by a $250,000 mechitzah, will fill only about one-fifth of the seats, and none will be onstage as a speaker. The majority of affiliated American Jews, who belong to more liberal streams of Judaism, will be unrepresented, not to mention the unaffiliated. So, too, will leaders of mainstream Jewish organizations such as the Jewish Federations of North America.

“It’s self-evident that the gathering will not appeal to the overwhelming majority of American Jews,” said Rabbi Rick Jacobs, president of the Union for Reform Judaism, which despite recently declining numbers remains American Judaism’s largest denominational movement.

Nevertheless, no non-Orthodox organization claimed to be capable of staging an event on any theme, religious or nonreligious, that could draw Jews in anything approaching such numbers.

That was not always the case. In 1987, a broad-based coalition led by the National Conference on Soviet Jewry and other Jewish agencies drew some 250,000 to the National Mall in Washington to support freedom of emigration for Soviet Jews on the eve of a crucial summit between Soviet Premier Mikhail Gorbachev and President Reagan. While some non-Jews participated, the vast majority were Jews, men and women marching together — including many Orthodox Jews, marching side by side with their non-Orthodox brethren. For weeks prior to the event, Jews in congregations from all streams of Judaism across the country were urged repeatedly by their rabbis to attend, and were provided with buses to make the trip — much as leaders of the ultra-Orthodox community are dong for the Siyum HaShas (though in this case, participants must also buy tickets for admission).

In terms of its ability to draw huge numbers from across the spectrum of American Jewry, the Soviet Jewry rally could boast being a bigger and broader show of Jewish unity. But that was a one-time event. And the Soviet Jewry cause, won long ago, has no rival anywhere on the horizon. Israel, for example, is today as much a source of division as it is one of unity. The Jewish Community Relations Council of New York, which sponsors the country’s largest annual Israel Day Parade, estimated participants at 30,000 last year, after many years in which they claimed 100,000 took part. This year, the council estimated 35,000 people marched. Three-quarters were Modern Orthodox.

As causes, both Israel and the Soviet Jewry movement focused on missions that brought Jews together in ethnic solidarity, as a people. In contrast, the Siyum HaShas — which translates literally as “completion of the Six Orders,” referring to the six tractates of the Mishnah, one of the Talmud’s two components —defines itself as a Jewish unity gathering rooted in shared religious belief. And that may be a sign of how times have changed.

“The bottom line is that what unified the Jews originally is the only thing that can unify us in the future: the Torah,” said Rabbi Avi Shafran, the Aguda’s director of public affairs.

Shafran acknowledged that the majority of Siyum attendees will be Orthodox Jews. But he argued that Daf Yomi not only unites the many diverse strands of Orthodox Judaism, but also increasingly appeals to Jews from outside the Orthodox world. Launched in 1923 by Rabbi Meir Shapiro at the First International Congress of Agudath Israel, in Vienna, Daf Yomi “was devised to enhance the sense of unity among Jews worldwide through the study of Torah,” Shafran said.

Enormous photographs of the seventh, 10th, and 11th Siyum HaShas events decorate the halls of the Agudah’s Manhattan headquarters. The last event, held in 2005 at Madison Square Garden, drew a crowd of 50,000 people.

In addition to the main event, smaller Siyums are held around the world. This year, an estimated 60,000 people are expected to take part in these other gatherings, bringing the total of the 2012 celebration to 150,000 people, according to the Aguda.

Even those Jewish leaders not attending are in awe of the Aguda’s achievement in bringing together so many Jews for a religious celebration. “I think the Siyum HaShas gathering is terrific,” Jacobs said. “I hope that it is richly rewarding for all who participate.”

Rabbi Tzvi Hersh Weinreb, a leading Modern Orthodox rabbi, said that Shafran’s claim draws on a widespread belief that three “ideals” are able to unify the Jewish people: “Am Yisroel,” the people of Israel; “Eretz Yisroel,” the Land of Israel; and “Torat Yisrael,” the Torah.

Today, while many Jewish organizations, such as the Jewish Agency for Israel, have embraced Am Yisroel, or Jewish Peoplehood, as a panacea against assimilation, the Agudah continues to emphasize the Torah. According to some observers, at least within the Orthodox world it appears to be working.

Weinreb, executive vice president emeritus of the Orthodox Union, said that although the Agudah is an ultra-Orthodox umbrella organization, every Modern Orthodox synagogue he knows of has a Daf Yomi program. He estimated that about one-third of attendees at the Siyum will be Modern Orthodox.

“There’s no question that of the 90,000 people who come, a large percentage will be people not institutionally affiliated with Agudah or members of Agudah but affiliated with the process of Talmud study,” Weinreb said.

As for Jewish unity: “It unifies a certain slice of the whole pie,” Weinreb said. “But unifying all the Jewish people? That’s a tall order.”

The Agudah’s attempt at reaching out to an audience broader than the Haredi world is apparent on the landing page of the Siyum organizers’ website. There, a video shows a man who has obviously married into a more strictly religious family talking to his wife. “I couldn’t have done this without you,” the man says before haltingly reading in Hebrew from the Schottenstein edition of the Talmud.

“Whoever learns laws every day is assured that he is destined for the world to come,” the man translates from the Hebrew. Then, the video reveals that the room is full of family members applauding his achievement. Another section on the site profiles women who have spent time studying the laws of tzniut, or modesty, and how to keep the Sabbath.

Talya Fishman, associate professor of religious studies at the University of Pennsylvania, asserted, “What was once just an Agudah phenomenon… all males all studying Talmud, has now been broadened.”

Fishman, author of the 2011 book “Becoming the People of the Talmud,” said that many Haredi and Modern Orthodox women are “studying Talmud — and teaching it — in unprecedented numbers. There are even talmudically learned women who serve as halachic advisers on certain legal matters of particular relevance to women.”

While Modern Orthodox women do study Talmud, Shafran said he did not know of any Haredi women studying it. “There will be many women at the Siyum, of course, but they are there to be honored as encouragers and enablers of their husbands and fathers, and as celebrants of the accomplishment,” Shafran said.

Women in the New York area who want to play a more active role in the Siyum will have to wait for August 6, when an alternative event is planned at Congregation Shearith Israel on Manhattan’s Upper West Side. Rabbi Dov Linzer, dean of a Modern Orthodox rabbinical school, Yeshivat Chovevei Torah, said he hopes the event will attract about 400 people.

Though Linzer applauds the Agudah’s Siyum — he will be in the crowd August 1 — he said it was “critical” to show that a more modern version of the Siyum is possible. His Siyum will be addressed by male and female speakers. “The message implicitly communicated, which we internalize, is that real Torah learning is only in the Haredi community,” Linzer said, “and that’s why I felt it was so critical to do something.”

Anecdotally at least, there is evidence that Talmud study has spread even more broadly.

Rabbi Judith Zabarenko Abrams, who has made a living out of teaching Reform, Renewal, Conservative and secular Jews about Talmud for almost 20 years with her Maqom online school, said, “Talmud study has increased in popularity and people’s acceptance of it as a basic Jewish activity.” Rabbi Daniel Nevins, dean of the Conservative movement’s Jewish Theological Seminary rabbinical school, said he had noticed an increased desire to study primary texts across the Jewish world.

Jonathan Sarna, a leading American Jewish historian, said that when American Jews look back historically, this year’s Siyum will seem an “an astonishing celebration of the Talmud.” But it should not be forgotten that Talmud study has branched out much further than the Haredi world. “Talmud study today is not just confined to men with black coats and long beards,” Sarna said, “and that is truly something to celebrate.”