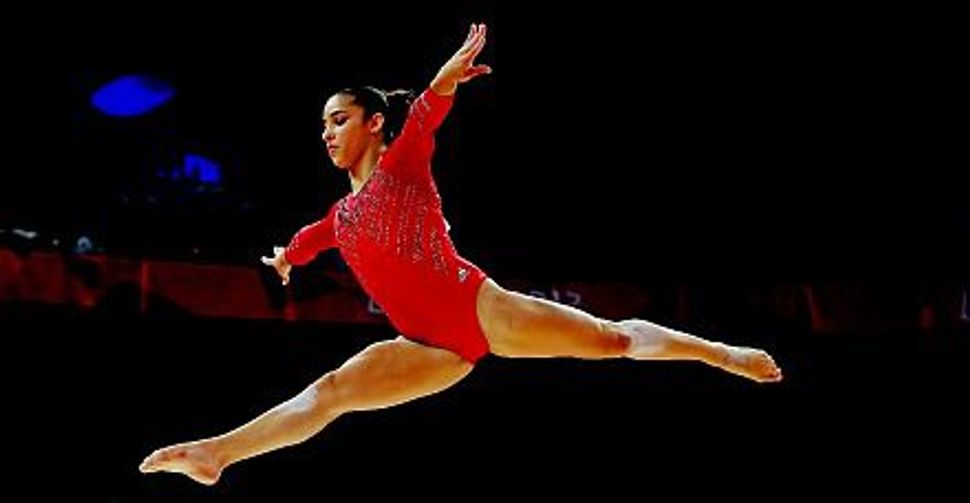 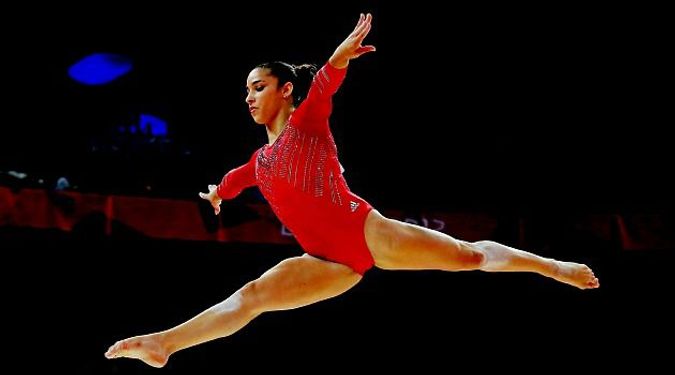 Our Gold Medal Queen: Aly Raisman competes in the Olympics team gymnastics. She goes for individual gold on Thursday. Image by getty images

“It all comes down to Aly Raisman,” the sportscaster declared, as U.S. women’s Olympic gymnast Alexandra (Aly) Raisman took to the mat during the team final competition.

A string-heavy version of “Hava Nagila” flooded through the arena as she began to flip. The floor routine was executed with near perfection, and as Raisman landed her last flying split, her face broke out in tears of joy.

The flawless routine ensured the U.S. team’s lead. The gold was theirs.

The U.S. team’s score of 183.596 was five points higher than the silvered Russia, causing many to conjecture that this may be the best U.S. gymnastics team in history.

The gold medal is just the latest step in the narrative Raisman has created for herself this past week. Raisman had, until last year’s world championships, been performing almost entirely in the background of the team. Training alongside Olympic veteran Alicia Sacramone at her hometown gym in Massachusetts and reigning world champion Jordyn Wieber — Raisman was just one of the many smiling, leaping faces in the American gymnastics scene.

And then, veteran Alicia Sacramone tore her Achilles’ tendon, thrusting Raisman into the spotlight as the new captain. She persevered, and led the team to a gold. That was the world’s first introduction to this agile teenager. Most of the pre-Olympics hype had revolved around Gabby Douglas and Wieber, the two predicted to nab the spots for the individual all-around competition. The athletes competed on Sunday for two spots in a qualifying round, with shocking results.

Though Raisman was tailing behind at third during the first three quarters of the qualifiers, an out of bounds step by both Douglas and Wieber during their floor exercises plunged their scores significantly. This, in conjunction with a near-perfect floor routine by Raisman, caused her to jump ahead in the rankings. The Hava Nagila routine catapulted her to first place, thereby ousting Wieber, the reigning world champion, from qualifying for the all-around medal round.

Sports pundits across the country were fixated on this push-out, and how it would affect the team’s ability to work in harmony for Tuesday’s team gold. Many feared that Wieber, who broke into televised tears after her loss on Sunday, would not be able to pull herself together.

But thanks to an elegant display from team U.S.A and multiple landing blunders by the Russians, the girls were able to grab the gold. It was the first time since Raisman’s hero, Kerri Strug, did so in the 1996 Olympics and only the second time that the U.S. has won a team gold in women’s gymnastics.

Raisman is set to compete, alongside Douglas, for the individual gold medal on Thursday, Aug. 3. She is expected to compete around 4:30 p.m. London time or 11:30 a.m. on the East Coast.

This is not the first time that 18-year-old Raisman, who hails from Needham, Mass., has wowed the judges with her “Hava Nagila,” routine. She claims to have chosen the folksy Jewish tune because of the exuberant effect it has upon her clapping crowd.

Raisman has been a member of America’s national gymnastics team for the past three years, and did her first tumble at 18 months old, during a Mommy and Me gymnastics class. Her mother, Lynne, was a gymnast in high school, and remains very involved in Aly’s training and routines. In fact, it was Lynn that gave Aly her most prized gymnastic possession—a VHS taping of the famed 1996 women’s gymnastics Olympics competition.

The taped event starred American Jewish gymnast Kerri Strug, who, with her record-breaking vault, brought the United States to a team gold, and broke the Russians’ previous 44-year Olympic hold on the sport.

“Kerri Strug inspired Aly a lot,” said Torey Champagne, who recently directed “Quest for Gold,” a documentary about Raisman. “Growing up, she watched that 1996 Olympics on a tape over and over.”

Raisman is coached by a Romanian-born couple, Mihai and Silvia Brestyan, at their gym in Burlington, Mass. The two coached the Israel national gymnastics team in the early 1990s, and in 1996 they moved to the United States to work with the U.S. Olympics women’s gymnastics team.

“He is very proud of what he was able to accomplish with the Israeli team, and looks back on it very fondly,” Champagne said, referring to Mihai Brestyan.

Raisman works with Brestyan six days a week, in double training sessions. Her schedule is so rigorous that she had to complete her senior year of high school online.

“We’ve been working so hard and it’s still so surreal to be an Olympic champion,” Raisman said. “Of course there were some sacrifices, but it’s all so worth it. It’s such an honor to be here.”