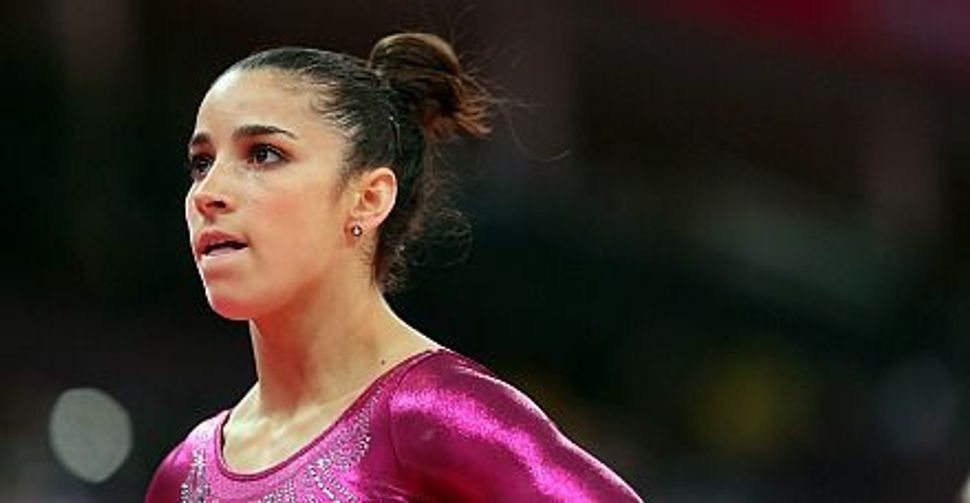 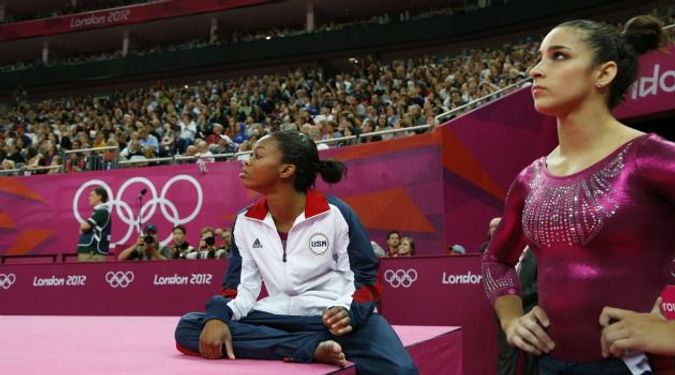 Aly?s Effort: Gymnast Alexandra Raisman watches nervously along with teammate Gabby Douglas during the individual women?s gymnastics medal round at the Olympics. Image by getty images

Aly Raisman fell just short of winning a medal in the women’s gymnastics competition at the Olympics after losing a tiebreaker and finishing in fourth place.

American Gabby Douglas won the gold. Sixteen-year-old Douglas took the Olympic Games by storm on when she won the all-around gold medal ahead of Russian Victoria Komova.

“I feel sad,” said Raisman, who maintained her composure even during a chaotic conclusion. “I was so close.”

Komova was reduced to tears for the second time in three days when Douglas pipped her to the title by 0.259 of a point after producing the day’s best performances on the vault and the beam.

Aliya Mustafina, who with Komova took team silver behind the Americans on Tuesday, clung on for bronze despite a fall from the beam. She and Raisman finished with the same total but the Russian won the medal on the tiebreak rule.

Despite trailing behind at fourth and fifth place throughout this afternoons individual all-around competition, Aly Raisman was almost able to nab a spot on the medal podium, tying with Russian competitor Aliya Mustafina for bronze.

It was a confusing and chaotic ending. Even Raisman said she was unsure of who would get the bronze when she saw their scores were identical.

Douglas, dubbed the “Flying Squirrel” for the shape she produces on the bars, was watched from the stands by team mate and world champion Jordyn Wieber, who had come into the Games touted as the favourite for Thursday’s honours but failed to qualify for the final.

The race today was tight and tense—with the four American and Russian competitors swapping standings throughout the four exercises. Though Raisman started strong, her wobbly performance on the beam, and slightly bouncey dismount from the vault, put her in fifth standing as she geared up for her floor routine.

With number 413 pinned to the back of her fuscia leotard, Raisman mounted the exersice mat—and wowed the judges with a 15.133, which temporarily placed her in second. Komova performed next, and her 15.100 placed her in silver, pushing the tied duo of Mustafina and Raisman to bronze. Then the execution score pushed Aly a rung lower.

Despite the disappointing outcome of today’s all-rounds, Raisman still has a chance to win an individual gold in the floor exercise competition, which will be held on Tuesday, Aug. 7.

According to Wall Street Journal’s Bruce Orwell, “Raisman’s floor exercise goes down as one of the great redemptive performances of these games following her balance beam wobble.”

Rules and regulations seem to be plaguing the Americans here. Wieber finished fourth in qualifying for the all-around but missed the cut since each nation is allowed only two women in the final. As Douglas and Raisman ranked above her in the preliminaries, Wieber was demoted to the role of spectator at the North Greenwich Arena on Thursday.

Raisman lost out on bronze despite finishing off with the second-best floor routine of the evening under the rule which separates equally-placed contestants by totting up the totals of their three best apparatus.

Douglas, though, was beyond the reach of such concerns, leading from the first of the four rotations when she was the opener on the vault.

A slight hop sideways on landing could have cost her but all her rivals fluffed their landings, with Komova stumbling sideways right off the mat.

Raisman banged her foot on one of the asymmetric bars in the second routine and began to look concerned. Douglas, for all her prowess on the apparatus, was beaten by the two Russians, with Mustafina scoring a high 16.100, but the American stayed in the lead.

With Douglas and the 17-year-old Komova duelling for the gold, their team mates were left to fight for bronze and Mustafina looked to have thrown away her chances when she came off the beam attempting to complete a twisting somersault.

Her score was a low 13.633 and Raisman took to the narrow piece of wood knowing she could take advantage. Her hopes shrivelled, though, when she only just saved herself from overbalancing and then wobbled precariously on a spin and she dropped to fifth place.

Though she recovered with 15.133 on the floor, where she won a world bronze medal last October, it was not enough to put her ahead of 2010 world all-around champion Mustafina.

Komova was last on the floor and Raisman stood with her arm around Douglas as they waited for the giant scoreboard, high above them, to show their fate. Seconds later, only Douglas was celebrating.

As Raisman bit her lip and Komova slumped in a chair and covered her face with both hands, Douglas climbed on to the dais by the vault run-up and waved to the wildly cheering and flag-waving American fans.

Her victory was another feather in the cap of Chinese-born coach Liang Chow who coached another American, Shawn Johnson, to all-around silver and beam gold at the Beijing Olympics four years ago.