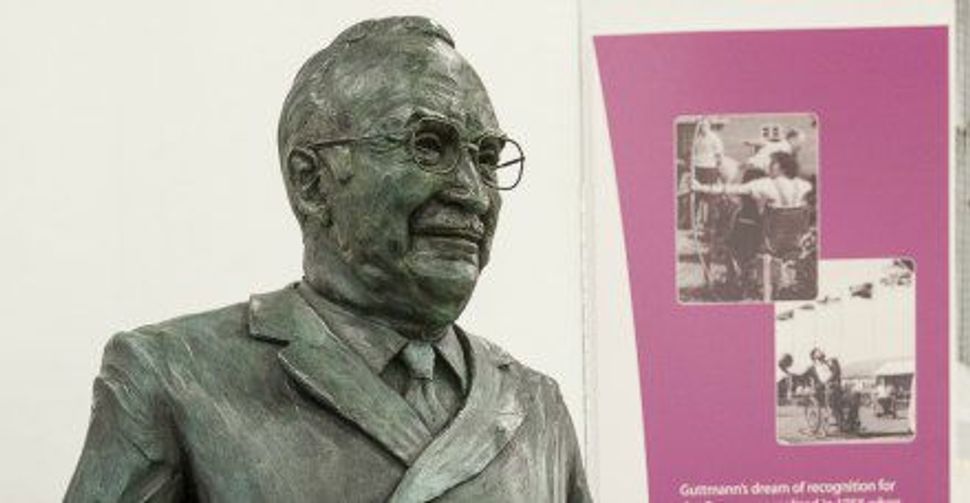 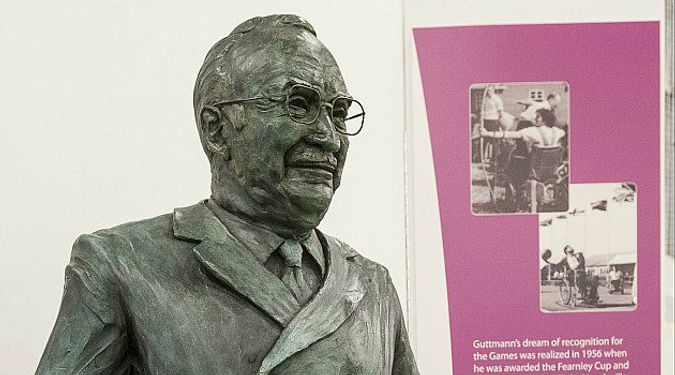 The Paralympics, the quadrennial competition for athletes with disabilities that follows the Olympics, will draw some 4,200 participants to London in late August to vie for medals before 1.5 million ticket-holders, 5,600 journalists, countless television viewers — and, for the first time, a bronze bust of the bespectacled physician and refugee from Nazi Germany who started it all.

Sir Ludwig Guttmann, whose groundbreaking treatments for traumatic paraplegia provided the platform for what has become the Paralympics, is getting some long-delayed official recognition at last.

The bust of Guttmann that will be on display at the London Paralympics was presented to the International Paralympic Committee’s president, Sir Philip Craven, last June by supporters of Guttmann. It will be lent out for display at all future Paralympic Games, as well, to visibly memorialize the father of what has become an enormous worldwide movement.

“We wanted to create a lasting legacy of Professor Guttmann’s contribution to the initiation of Paralympic sport,” said Mike Mackenzie, chairman of the Poppa Guttmann Trust, which commissioned the bust. The trust, established in 2010 to promote awareness of the history of spinal cord treatment, also commissioned a full-sized statue of Guttmann that will stand outside the National Spine Injuries Centre at Stoke Mandeville Hospital, in Aylesbury, where Guttmann worked.

Born in 1899 to a Jewish family in Tost, Germany, Guttmann grew up in the coal-mining town of Königshütte. It was there, as a 17-year-old hospital volunteer, that he saw his first paraplegic patient, a coal miner who wasted away and died after a fracture of the spine. As a medical student in Freiburg, Guttmann was an active member of his Jewish fraternity, where he worked against anti-Semitism in German universities. At the same time, the young doctor exhorted his fellow Jewish students to play sports and train physically, building not just bodily strength, but also self-confidence, and taking pride in their identity.

By 1930, after getting his medical degree and working as a neurosurgeon at Hamburg University, Guttmann had a job in Breslau as assistant to the country’s top neurologist. But just three years later he was fired: With the ascension to power of the Nazis at that time, Jews were barred from practicing medicine at Aryan institutions.

Unwilling to flee despite the rising Nazi threat, Guttmann immediately took over the neurological and neurosurgical departments at the Jewish Hospital in Breslau. In 1938, on the eve of Kristallnacht, Guttmann, now the hospital’s medical director, ordered staff to admit any male patient seeking admission in defiance of laws that mandated the hospital treat only Jews. The following morning, he was called to justify the presence of 64 new hospital patients in front of the Gestapo commissar.

“He took the Gestapo from bed to bed, justifying each man’s medical condition,” his daughter Eva Loeffler recalled in an interview with the Mandeville Legacy project. “Apparently he also pulled faces and grimaced at the patients from behind the Gestapo’s back, signaling to them to pull the same expressions and then saying ‘Look at this man: he’s having a fit.’”

Though he managed to keep all but three of his charges from the concentration camps that day, Guttmann decided soon afterwards that the time had come to leave Germany. With the help of the Council for Assisting Refugee Academics, he arrived in England in March 1939 with a wife, two children and no money.

The mortality rate for spinal injury in the British and American armies at that time was so high as to be a de facto death sentence: Only one in five victims of traumatic paraplegia would survive, according to the Poppa Guttmann Trust. Those who did were crippled beyond recovery, living an average of only three painful months longer, unwanted by society and largely unaided by medicine. But Guttmann’s work spurred the creation of a new center for their treatment, and he accepted the position of inaugural director of Aylesbury’s Stoke Mandeville Hospital, on the condition that he was free to employ his medical philosophy uncompromised and unhindered.

There, Guttmann set out a radical therapeutic approach for recovery: intensive physical training, including sports training, to rebuild not just the physical, but also the psychological strength of his patients.

“He would say, ‘Your lazy time is over,’” Philip Lewis, a former patient of Guttmann, told Britain’s Channel 4 News in a June television interview. Lewis, today a member of the Poppa Guttmann Trust, recalled a training regimen that would be intense for anybody. “I’d start with archery, which is very good for the shoulders to strengthen muscles; then I’d be in the hydrotherapy pool, then into the gym. From 4 to 5 p.m. was table tennis, and there was also occupational therapy.”

In July 1948, just as the Olympic Games were opening in London, 16 men and women shot at archery targets on the lawns of the hospital. They were now competitors in formal games for wheelchair athletes — the first of their kind.

Guttmann wanted the Stoke Mandeville Games to become an international competition, alongside the Olympics, with equal dedication from, and prestige for, its athletes.

It was a vision that fast became reality. The scope of competitors broadened in 1952 with a visiting team of Dutch war veterans, and by 1960 the first quadrennial Paralympic Games were held in Rome, right after the Olympic Games there, featuring a roster of 350 athletes from 24 countries.

As they continued to grow, the games — and Guttmann — attracted praise from sportsmen and diplomats alike. Guttmann received the Fearnley Cup, an award for outstanding contributions to the Olympic ideal, in 1956, and Queen Elizabeth II knighted him 10 years later. In 1968, Guttmann accepted an offer from Israel to hold the Paralympic Games in Tel Aviv as a celebration of the country’s 20th anniversary of independence, an event that drew 10,000 spectators.

The crowds for the games continued to grow. But Guttmann died of heart failure in 1980, eight years before the Paralympic games in Seoul would officially institute the practice of following the Olympics (as the Greek word “para,” or “beside,” represents). Today, the Paralympics comprises some 20 summer sports, including cycling, judo and wheelchair fencing.

Though he was driven from his homeland as a Jew, Guttmann never lost his drive to push the boundaries of medicine, creating impressive athletes where others saw only weakness. Lewis, who represented England in table tennis at the 1964 Tokyo Paralympics, emphasized the importance of recognizing the movement’s beginning. “The whole thing evolved, but it had to start,” he said in his interview with Channel 4 News. “And it started at Stoke Mandeville hospital, on a little patch of grass in 1948.”