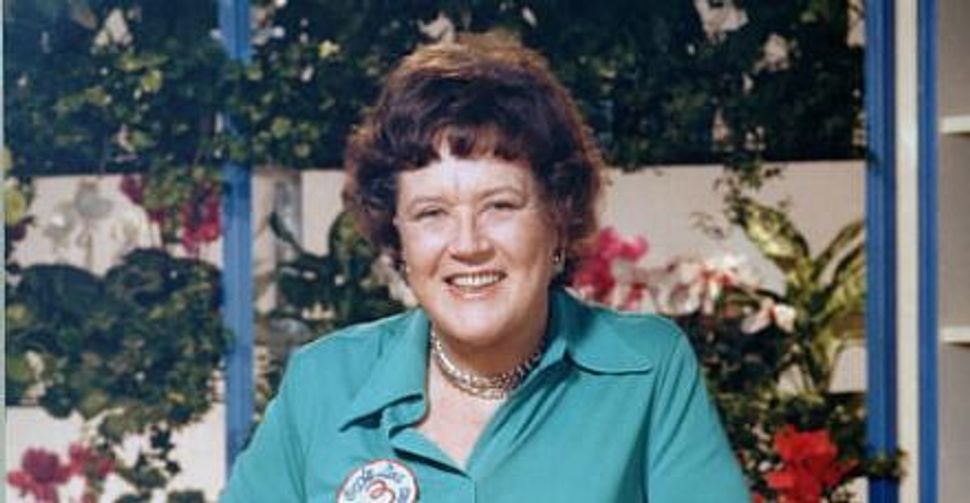 Julia Child, who would have celebrated her 100th birthday on August 15, is perhaps not the most obvious contender for a Jewish food icon. A broad-shouldered, aristocratic New Englander who spent years in France with her diplomat husband, Paul Cushing Child, she introduced mid-20th-century Americans to French cuisine (and to the notion that cooking should be a source of passion and pleasure) via her seminal cookbook, “Mastering the Art of French Cooking,” and her cooking show “The French Chef.” Child drew inspiration from molded terrines and boeuf bourguignon, not from matzo balls or pastrami. But her enthusiasm, dedication to technique and unpretentious insistence on using high-quality ingredients indelibly shaped a generation of cooks and eaters, including many of today’s Jewish food experts. 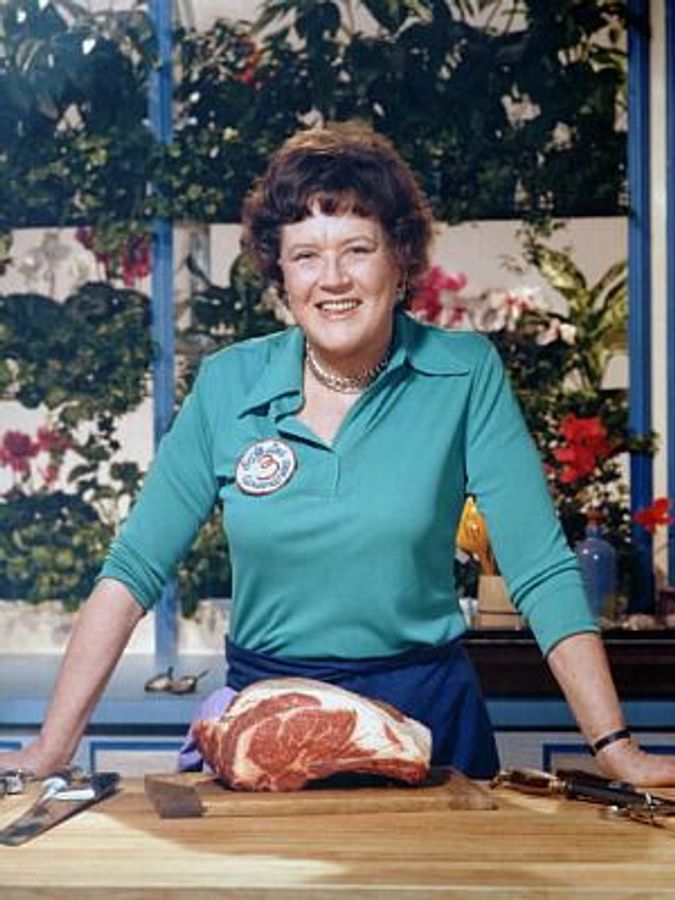 In most respects, Child’s impact was universal. In the food world and beyond, she was simply known as “Julia” — a testament to her widespread cultural influence. As the late “Julie & Julia” director and devoted amateur chef, Nora Ephron, said on NPR back in 2009: “I was a slave to Julia… and all of my friends were. This was in the ’60s… and truly, if you didn’t own that book, you had not passed into adulthood as we understood it…. Everybody cooked from it. It worked. It was perfect.”

Read My 30 Minutes With Julia Child on the Sisterhood blog.

Cookbook author Arthur Schwartz, who first became enamored of Child while watching her show in his college dorm in the mid-1960s, agreed. “Cooking my way through her book, I learned about the discipline of technique,” he said. “It was a liberating kitchen education.” And Joan Nathan, who shares an editor with Child (Knopf’s Judith Jones), said she turned regularly to “Mastering the Art of French Cooking” for guidance when working on her most recent cookbook, “Quiches, Kugels, and Couscous: My Search for Jewish Cooking in France.” “Her chemical analysis of French cooking was brilliant. That’s how I learned,” she said.

Child’s success also held a special, if unintended, resonance for the Jewish community. In an era that idolized glamorous, all-American women like Marilyn Monroe and Jackie Kennedy, Child stood out for being unabashedly idiosyncratic. “I remember being a kid and seeing this wonderfully out-there, larger-than-life woman on television who was completely comfortable with herself,” said cookbook author and Moosewood Restaurant founder Mollie Katzen, who in 1994, co-starred with Child in a cooking segment on “Good Morning America.” “More than what she cooked, her personality made an impact on me.” Child may have been as blue blooded as they come, but her ease in her own skin must have felt empowering to mid-20th-century American Jews as they strove to enter mainstream society while staying true to their roots.

Perhaps more than anything, however, it was Child’s insatiable curiosity about her colleagues and about the world that encouraged a generation of Jewish cooks and writers to find their vision and voices. When Nathan was in her early 30s, Child appeared as an unexpected participant on a Jewish food tour of Philadelphia that she was leading. “All of a sudden, she just showed up!” Nathan said. “At first I had no idea why she would want to be there.” As it turns out, Child’s family had recently welcomed a Jewish person, through marriage, so Child wanted to learn more about Jewish cuisine.

In the late 1990s, Child made a guest appearance on Nathan’s public television show, “Jewish Cooking in America,” for an episode about kosher eating. “We walked down the aisles of a kosher fish market, and she asked such great questions in her trademark high-pitched voice,” Nathan said.

“She was the ideal interested bystander,” said baker and cookbook author Alice Medrich, who made a chocolate raspberry ruffle cake in 1996 as a guest on Julia’s television show, “Baking With Julia.” Child was not shy about sharing advice. Medrich remembers her saying, “Now, Dearie, if you have to run the mixer for a while, say what you need to say first and then shut up.” And yet she always encouraged her guest to be the expert and the star. “I’m so appreciative of how she mentored so many cooks in our generation,” Medrich said.

Her genuine interest in all things culinary granted permission for young chefs to explore their own passions, whether that meant brioche, like it did for Medrich, or the world’s Jewish cuisines. Author Faye Levy remembers Child suggesting that she write “a really thorough and high-class book on Jewish cooking” when they corresponded by mail in the mid-1970s. And in 1991, when Levy published her “International Jewish Cookbook,” in the introduction she thanked Child for the inspiration. Meanwhile, chef and cookbook author Rozanne Gold said that Child’s devotion to French cooking inspired her own explorations of Israeli cuisine. “Julia taught me to be authentic and find my own way into the food world,” Gold said.

If Child were around today, she would probably reject the notion that she was extraordinary. “I think it would make her uncomfortable how we have turned her into this food saint,” Katzen said. And yet, as a chef, a mentor and a lifelong student, Child was indeed extraordinary. She embodied the adage that when you “follow your bliss” — be it French cuisine, Jewish food or anything else — life will be delicious both in the kitchen and out of it.

What is your favorite memory of Julia Child? Share it with us below.

Leah Koenig writes a monthly column on food and culinary trends. Contact her at ingredients@forward.com.