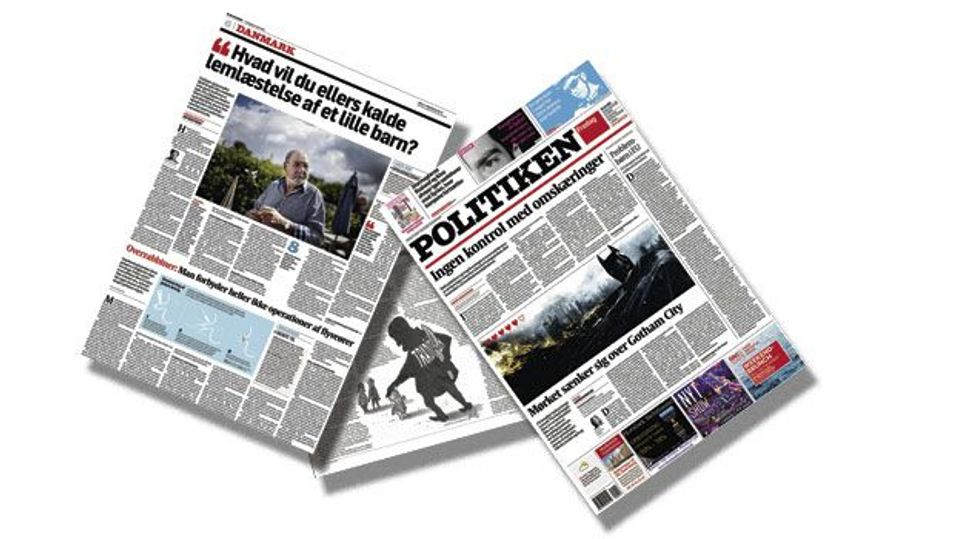 Tolerant Denmark, the nation that famously saved its Jews during World War II, is embroiled in a fierce debate about whether circumcision should be medically supervised or even banned.

The Scandinavian country is not alone: Health officials in Norway, Austria and Switzerland have also questioned circumcision this summer. But in Denmark, the debate has dominated the media as a topic for public discussion.

The furor follows hard on the heels of a ruling by a local German court outlawing circumcision, and a local Dutch court banning ritual slaughter. Both rulings, later overturned by higher courts, and the debate in Denmark reflect a deep-seated secularism in Northern Europe that is becoming increasingly hostile toward Jewish and Muslim practices.

“Now we know again that large parts of the Danish population, leading doctors, leading ethicists and many politicians suffer from acute spiritual and cultural phimosis [a tightening of the foreskin],” Danish journalist Martin Krasnik wrote in a July 27 article in the newspaper Politiken.

Krasnik, one of several Danish Jews to come to circumcision’s defense, complained bitterly of the “freak show of commentaries and readers’ letters” that filled newspaper columns, websites and television talk shows in Denmark this summer, transforming a usually slow news cycle into the “golden days of a good old-fashioned culture of radical xenophobia, self-righteousness and disgusting wiener talk.”

Circumcision opponents retort that their stance has nothing to do with xenophobia or religious prejudice. Instead, they say, it is about protecting children’s rights. Backed by research suggesting that circumcision causes babies intense pain and harms some men’s sex lives, a chorus of critics, including secularists and politicians, say circumcision must be stopped.

Politicians from several Danish parties questioned why a requirement that a doctor be present during ritual circumcision is not routinely followed. Others went further. Jørgen Arbo-Bæhr, a Member of Parliament for the socialist Red-Green Alliance, told The Copenhagen Post, “We advocate a ban on circumcision.”

At the center of the Danish debate is Morten Frisch, an epidemiologist from the Statens Serum Institut, in Copenhagen. His recent study concluded that circumcised men reported “frequent orgasm difficulties” and that their female partners suffered “a range of frequent sexual difficulties.”

Frisch has been joined by Jews who also oppose circumcision. Under the headline “Can You Give Me My Foreskin Back?,” Leo Milgrom, 32, wrote an open letter to Denmark’s chief rabbi, Bent Lexner, saying that “it is wrong to maintain a practice that unnecessarily cuts parts off small children.”

Pointing out that modern Jews ignore many of the 613 commandments, Milgrom suggested it was time to end ritual circumcision. “I would never in my life permit anybody at all to cut something off my penis,” Milgrom wrote. “And how,” he asked Lexner, “would you advise my parents, who didn’t even consider or reflect that they said yes to a mutilation, an operation without any clinical justification and without a painkiller, on their own son?”

Herbert Pundik, a senior, Israel-based correspondent for Politiken, said circumcision has become a regular topic of debate in Denmark. “The fact it does excite attention, this is a positive thing,” said Pundik, who was Politiken’s chief editor for almost 24 years. “I’m not against circumcision, but am very for the fact that it should be discussed.”

The controversy in Denmark was ignited by a recent court ruling in Cologne, Germany, which found that the botched circumcision of a 4-year-old Muslim boy violated the child’s right to physical integrity.

The German Medical Association advised its members to halt nonmedical circumcisions out of fear that they would be prosecuted. German politicians had to step in to reassure Jews and Muslims that the right to circumcise their children would not be infringed.

On July 15, Anders Jerichow, president of the Danish PEN society and a senior correspondent and editor at Politiken, wrote an editorial lauding the German political response, calling religious freedom one of the “most important and fragile columns of democracy.”

Jerichow, who is Jewish, went on to compare circumcision’s opponents to anti-Semites and to suggest that circumcision for Jews corresponded to baptism for Christians. “Society would be wise to accept that both practices are outside the domain of the state, not a legal question but the responsibility of the parents,” Jerichow wrote.

Politiken is viewed as Denmark’s most intellectual daily newspaper. Such a defense of circumcision did not go down well in this staunchly secular country, where opponents routinely describe the practice as a barbaric or medieval form of genital mutilation.

Several days later, Kjeld Koplev, a Jewish broadcaster who converted to Catholicism, published an article in Politiken calling circumcision “pure torture.” Koplev said he had been psychologically traumatized by his own circumcision and that the practice was “a violation of the Jewish man’s sex life” and a violation of the U.N. Convention on the Rights of the Child.

Denmark is home to about 300,000 Muslims and about 5,000 Jews. Despite the uproar, and what he saw as mounting opposition to circumcision in Northern Europe, Lexner said he doubted the ritual would be outlawed anytime soon, because it would be perceived as contravening “religious freedom.”

Politiken’s executive editor-in-chief, Bo Lidegaard, agreed. Only backbench Members of Parliament had spoken out against circumcision, he noted, while “most of the decisive politicians kept a very low profile” during the debate.

Lidegaard added that for secular Danes, circumcision presented a classic dilemma between two competing liberal freedoms: parents’ right to exercise their religious freedom, and the right of children “not to be dragged into their parents’ religion in a way they cannot reverse.”

Whether circumcision causes physical harm also remains up for debate. After Frisch’s study was published in the International Journal of Epidemiology, three specialists wrote to the publishers, pointing out that the study drew conclusions from a very small pool.

They noted that Frisch looked at just 2,093 men. Of the 203 participants who were circumcised, 85% had the procedure as adults. This suggests that many had been treated for an outstanding “foreskin pathology,” the specialists said.

Lidegaard said that as long as there is no evidence that male circumcision is harmful, its opponents will always have a hard time banning the practice in Denmark.

But he added, “Clearly, if you could establish in an authoritative way that this does harm, that there is a medical argument that can be well established, that will change the situation.”